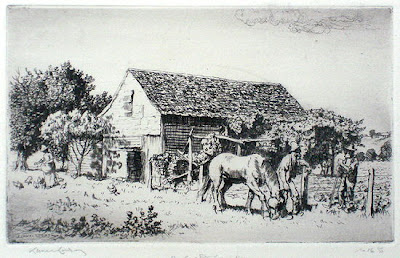 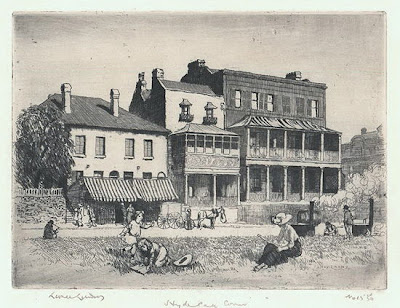 Lionel Lindsay (1874-1961) was one of three Lindsay brothers, part of one of Aus­tralia’s best known and most talented art dynasties. His etchings became very pop­ular in Sydney, to the extent that he became very involved with the Soc­iety of Artists. In 1921, when the Australian Painter-Etchers' Soc­iety emerged, Lindsay became its first president. He moved to Lon­don and began to exhibit in 1923. Of all the countries he visited, I sup­pose Spain was the one that intrigued him most.

When was the first time Lionel Lindsay publicly expressed his anti-modernism, anti-Semitic views? Michael Duffy found a letter to the editor of the very influential Sydney Morning Herald, 16/10/1940. It was inspired by a visit Lindsay made to an exhibition of the Contemporary Art Society. Lindsay was a very unhappy art critic, rav­ing in the letter that "The Australian public is perhaps yet unaware that mod­ern­ism was organ­ised in Paris by the Jew dealers, whose first care was to corrupt critic­ism, originate propaganda and undermine accepted standards so that there should be ample merchandise to hand­le. It was Uhde, the Jew art critic, who proudly boasted that three quart­ers of the art dealers, critics and collectors were Jews." Lindsay claimed that one-third of the artists in the exhibition had foreign names, due to the "influx of refugees", and observed that "true art grows like a tree from its native soil, and not from the sludge of decadent civilisations".

Please note that the date of his Sydney Morning Herald diatribe, 1940, was the same time that the Jews of Central and Eastern Europe were being herded onto cattle trucks to be taken to extermination camps. 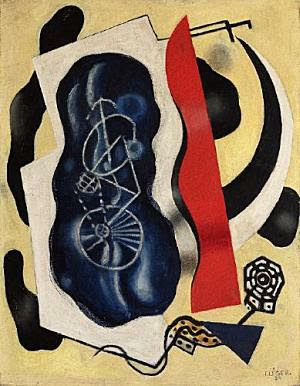 But it was his book Addled Art where Lindsay actively mourned the loss of art­istic tal­ent. He believed that drawing was the basis of fine art. The loss of craftsmanship in art was directly due to the downgrading of draw­ing, some­thing that demanded dis­cip­line, pat­ience, hand-eye skill. So modern art was a flight from reas­on. Mod­ern­ism HAD to attack the found­ations of artistic tradit­ion, he said, but it had to be in­sidious.

Matisse couldn’t draw, so he was reduced to playing with surfaces. Chagall’s madness of vision, Lindsay said, inspired morbid pass­ions. “A perfume of Oriental bazaars emanates from their over-col­oured canvases which are crowded, sinister in expr­ession, disorderly and plastered with paint”. Questioning whether Klee was mad because he had had men­ing­itis, Lindsay saw him as an escapist who wished to get back into a child’s mind and clothes. Miro and Dali were dist­ing­uish­ed only by sexual obsession and sadism. Rouault was an embit­t­er­ed mis­ogyn­ist. Modigliani’s portraits had a Negroid element about them & his art tried to lure the guttersnipes down into Modig­lian­i’s own alcoholic misery. Picasso’s paintings were meaning­less, brown­ish enigmas, imitation art which could be framed up in any direction. Picasso had no personal­ity seeking expression; no vision that de­manded utterance. Only Cezanne and Degas escaped Lindsay’s vitriol. 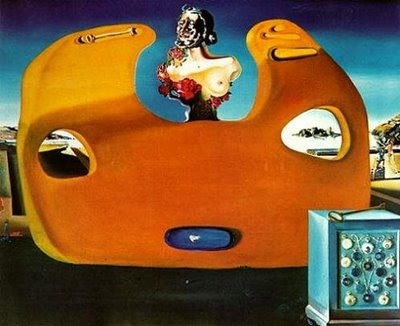 Lindsay included this image in the book to display Dali’s account of sadism and sex implications. The painting was viewed by curious visitors in its Australian exhibition only because “things in decay attract the flies”.

The concept of modern art being seen as “putrid meat” was probably borrowed from Nazi art critics. But Personal Reflections blog in Death of Australian painter and writer James Gleeson found an Aust­ralian use of the term. JS MacDonald, soon-to-be director of the important National Gallery of Victoria, was disgusted at the Murdoch Herald display of cont­emp­orary French and English art, 1939. “They are exceedingly wretched paintings … putrid meat … the product of degenerates and perverts … filth”, he wrote.

In Addled Art, Lindsay stated that nature was never ugly; only in degen­er­ation and decay could the spirit of ugliness dwell. So how did all this modern ugliness get foisted on an unsuspecting public? Lindsay’s answer was crisp. Three quarters of the European art dealers, critics & col­l­ect­ors were Jews. Jews excelled in the discovery of great val­ues, well ahead of the Aryans. It was due to Jewish influence and Jewish money that naus­eating paintings were sneakily slipped into galleries and priv­ate collections. “They have become the all-powerful masters of a rich and beautiful domain. They have their press, for making and destroying reputations, and in every country their agents are but hucksters”.

We cannot understand the timing of Lindsay’s vicious anti-Semitism, but we CAN understand the timing of his anti-modernism. Four important events had just happened. a] Pro-modern art views were strongly expressed during the disputes generated by attorney-general Robert Menzies in 1937. His proposal was to establish a conservative Australian Academy of Art. b] The huge support of Keith Murdoch of the newspaper empire, along with intense work by art critic Basil Burdett, resulted in the 1939 Exhibition of French and British Cont­emporary Art. It might have been controversial, but it was enormously successful in bringing international modern artists to Australia for the first time. c] The Angry Penguins modernist journal started up in Adelaide in 1940. d] The Contemporary Art Society held a very interesting exhibition in Melbourne in 1941. As a result of these four events, the full vengeance of the powerful anti-modernist tradition in Australia came pouring forth.

Sadly Lindsay became a Trustee of the Art Gallery of New South Wales and was knighted for his services to Australian art in 1941. Addled Art, this vituperative attack on modernism in art, wasn’t pub­lished until 1942, AFTER Lindsay’s knighthood and gallery trust­eeship had been confirmed. In case the book’s message was too subtle for the reader, the book's cover showed a monkey, drawn as a caric­ature of a Jew and dressed as an artist, throwing rotten fruit at the Venus de Milo. Lionel Lindsay died in Melbourne in 1961. 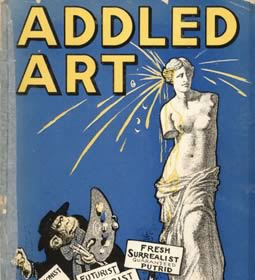 cover of Addled Art, by Lindsay

It is interesting to note that despite the Allies fighting Nazi Germany and their treatment of Jews, a proportion of the Allies were extreme anti-semites, before, during and after the war.

It seems odd that there didn't seem to be a conflict of interest in fighting Nazi Germany, while at the same time loathing Jews and blaming them from everything from unemployment to Modern Art.

On a related subject. I once read that one of the Nazi links of Modern Art with Jews was that artists who were trying to paint classically, would throw away their failures, which would then be salvaged by Jewish art dealers to be sold to the gullible public as Modern Art. To believe that convoluted story would be a gullible act in itself.

Thanks John. Tonight I will take your comment about art dealers and add to it, in a supplementary post on Addled Art.

Will seek a copy of Addled Art. Certainly, Lindsay provided an interesting and perhaps plausible argument in the aesthetic sense re personality & outcomes of some eg Dali.

well and truly worth reading. Yes Lindsay’s anti-Semitic and anti-modernist views were free-flowing and nasty, so prepare yourself before you start this slim book. But I would really love to know how influential the book was in art circles back in 1941.

David Gascoyne was one of the organisers of the International Surrealist Exhibition which shocked, puzzled and amused the British art world in 1936. Strange events unfolded in the New Burlington Galleries, London. Salvador Dali delivered a lecture from a deep-sea diver's suit, the better to plumb the depths of his unconscious. This almost suffocated Dali, and Gascoyne had to borrow a spanner to release him.

In a Radio 3 programme that was itself a surrealist work (June 2016), Ian McMillan told the story of the exhibition, and the influence it has had on art and writing. There was recorded testimony from some of the artists eg David Gascoyne and Roland Penrose, and surrealist music. Louisa Buck led him around the surrealist sites of London, original catalogue in hand.