Beechworth (pop 3500) is 271 km NE of Melbourne. It has at least 30 sites listed with the National Trust, mostly elegant buildings from the middle/late Victorian era. Even more noteworthy is Beechworth's coherent street­scape, partially because honey-coloured local granite was used as a building material. Today the streets are still well laid out, broad, tree lined and in proportion. This is no Disneyesque mockup of a town. 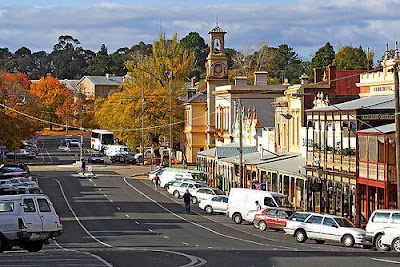 In 1839, David Reid was one of the first Europeans to explore the area which he named May Day Hills. The Beechworth gold rush started when one of Reid's for­mer shep­herds found gold on Spring Creek in 1852. Many other gold discoveries were made and 800 people arrived by late 1852. May Day Hills shop keepers asked the government to lay out a township, which it did.

Within a few years years, loads of gold had been found. At its peak there were 30,000-40,000 people and 61 local drinking establishments. Then reef min­ing of quartz replaced alluvial work as the main source of gold. The use of dynamite led to the 1859 Beech­worth Powder Magazine, a small buttressed room for storing the gunpowder used in gold mining. All the major gold fields had a powder magazine, also used in the quarrying of stone for building.

Consequently Beechworth became the administrative centre for NE Victoria. Many sub­st­antial public buildings were erected at this time eg a hos­p­ital 1856, hospital for the aged, a mental asylum, a flour mill 1855, law courts 1855 and, of course, a gaol was an early neces­sity 1853. The first local member was elected to parliament in 1855.

Beechworth was said to have had the largest Chinese population in the country outside of Melbourne, with 7,000 on the local fields by the early 1860s. They worked claims aban­doned by others, and established market gardens and tobacco crops. European racist sentiments led to a riot in the Buck­land Valley in 1857 where Chinese miners were robbed or killed. Still, Beechworth’s Chinese community made a significant cult­ural and social contribution. The Beechworth Cemetery, estab­lished 1856, contains the graves of 2000 Chinese who worked the goldfields. See the twin ceremonial Chinese Burning Towers.

The man sent to deal with the anti-Chinese disorder was Robert O'Hara Burke who, with William Wills, later led the first expedition to trav­el north across Aust­ra­lia in 1860-1. Burke had served as super­in­t­­endent of police at Beech­worth from 1854-8. 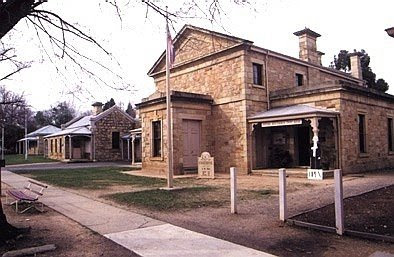 Australia's best-known bushranger, Ned Kelly, had a long association with Beechworth, especially the courthouse and gaol. The impressive gaol 1859-64 was built to replace a wooden stockade and is still work­­ing. Huge granite perimeter walls, fine rounded sentry towers with octagonal roofs and the arched gateway stand grimly. The Robert Burke building became a museum in 1863, housing one of the country's largest Ned Kelly collections.

In 1856-60, they demolished many timber buildings from the early gold rush, making way for more sub­st­antial granite structures on Ford and Loch Sts today. The courthouse 1857-9 is one of several excellent public buildings in Ford St. It closed in 1989 and opened soon after as a museum and hall. Built of granite by Scot­tish stone masons, it feat­ures a cent­ral block with gab­led ends con­taining the main courtroom, flanked by office wings. Ver­andas outside and a public vestibule inside still remain, as do the original fittings.

The gold treasury is wonderful, with its offices of the Chinese Protector and Warden of the Gold-fields. Originally built as a Gold Office and Sub-Treasury in 1856, the building served as a storage area for gold found on the fields. The gold was then transported fort­nightly to the Melbourne Treasury. In the 1880s the gold Treasury became the Beechworth Police Station, lasting 100 years 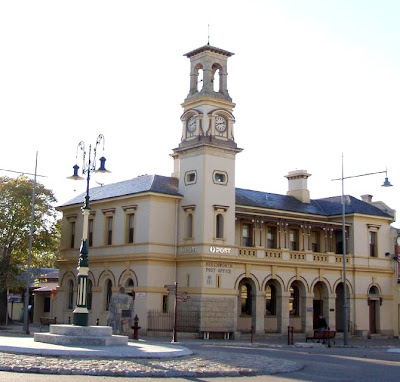 Today’s post office was erected in 1869-70, to replace the original building which had been destroyed by fire. This amazing building is an Ital­ianate structure with a square tower containing the original bell and clock. It features a colonnade on the ground floor and a bal­cony with slender columns for the post master’s residence upstairs. Note a lion’s head iron drink­ing fountain.

The Bank of Victoria building is also imposing, built in 1867 to replace an earlier bank destroyed by fire. The building features arched windows on the ground floor and a small cast -iron balcony above the main entrance. Inside is the original gold vault which was used when the building was a gold office. And an impressive crystal chandelier. The old toilet blocks, servants' quarters and balcony have been restored and a Victorian-style fount­ain has been installed in a fine stone pool within the garden area. This is overseen by wrought-iron gates. And the former Bank of NSW buil­d­ing 1856-7, two-storey stone, is now a wine centre. Finally we have the Bank of Austral­asia 1858. Banks were clearly the most important institution in a city based on gold money.

The famous Beechworth Bakery was first built as a small store in 1857. It was expanded to include a second story and a balcony with grille work before 1900. In Camp St is the impressive facade of the former London Tavern 1859-62 which was the town's first all-brick hotel. It is arranged around a veranda and central courtyard.

In Ford St is the former Star Hotel 1864 which has been con­verted to shops with the upstairs serving as private accommodat­ion. It was actually the third building on the site to go under that name; the first being erected in 1853 and the second burned down by fire. The polychromatic brickwork hotel doubled as a theatre where professional acts performed for the miners. A social centre!

The pubs were the most important facilities in town for many miners. Dozens of simple structures sprang up with the initial gold rush, on the local goldfields. The best survived with ear­lier wooden structures being replaced by more extensive build­ings. Thus Tanswell's Commercial Hotel 1873 rep­laced the 1853 wooden original. It is a two-storey stone and brick structure with a decorative iron lacework veranda. The facade, with its richly gilded crest on the front window and French doors, has been carefully rest­ored. The lounge is furnished in mid-C19th style, as the Kelly gang knew it.

To the rear of the building are the coach house and stables which were originally built by the American Hiram Crawford. He establ­ished his firm and a coach-building works, with Tanswell's acting as the booking office. Crawford's was the most successful coaching service in the 1850s and 1860s - it covered all of Victoria's north-east stretching from Echuca to Corryong, Bright, Wangaratta ...and into Albury and southern NSW's Riverina area.
. 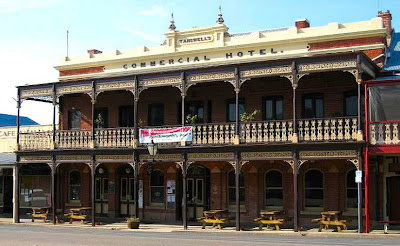 Breweries were almost as important. Murray Breweries Historic Cellars were built in 1865, at which time they were known as Billson's Brew­ery.

Churches were as important as pubs. Christ Church was started in 1858 while the tower and chancel date from 1864. This fine early prov­incial church design has a massive square tower and stained-glass windows. Nearby is the Gothic-style St Joseph's Roman Catholic Church 1868 with its fine rose window and interior granite columns. Over the road from the gaol is St Andrew's Uniting Church 1857, a rendered brick structure featuring an unusual square tower.

In 1886 four Brigidine nuns sailed from Ireland to Australia. They arrived in Beechworth where they established a con­vent in the former Oriental Bank building in Ford St, which in 1886 became the second Brigidine convent in Australia. The following year the sisters took over St Joseph's school, buying land adjacent to the school. Much later it became the Old Priory Lodge. 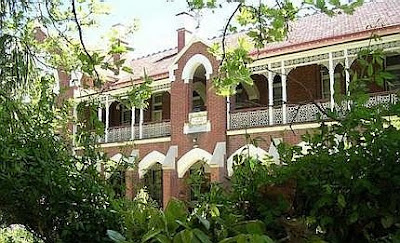 Ovens District Hospital was once the largest hospital between Melb­ourne and Sydney. It was built in stages from 1856-1900 with the key work and extensive gardens being done 1862-64. All that remains now is the elegant Palladian granite façade; its fine stonemasonry featured a triple-arched entrance and stylised Classical pediment.

In the late 1880s it was decided to demolish the first Council off­ices in the town hall and erect a double st­orey building. Early on the hall also served as a Court of Petty Sessions, with the magistrate seated in an elaborate carved chair. Kerosene chand­el­iers illuminated the hall for social occasions. Adjacent are the Town Hall Gardens 1875, when botanist Ferdinard von Mueller donated trees.

The Mental Hospital and Lodge 1867 is a very large structure built of bricks in the Dutch colonial style with curved gables. The verandas were impressive. The gardens were designed by a landscape gardener who was one of the first in­mates. Water was supplied by rainwater which was funnelled from the roof into 7 under­ground chambers via hollow veranda posts. It is now one of Latrobe University’s campuses.

Beechworth benefited from being on the main Melbourne-Sydney road, alth­ough the town's importance decl­ined when Wangaratta received the railway in 1873. Worse still the town declined as the mining activity faded, in the late C19th. But for people who want to inspect intact Victorian architecture and history, Beechworth's lack of modern development is ideal. The best blog is Beechworth Today eg Historic Burke treasure stars in new circus exhibition. 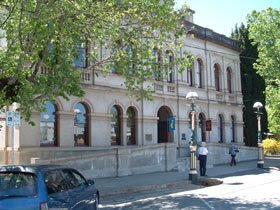 Beautiful picture blog showing many of the wonderful and unique Victorian architecture. Congratulations!

A great post which has regenerated my desire for another look at Beechworth and the surrounding area, thanks.

Love all the buildings. What a great looking town!

It is difficult sometimes when sitting here in the UK not to be blinkered by a UK and Eurocentric outlook. There is so much more in the world to discover. Thanks!

Amazing pictures of art and architecture. This post also contains the information about Victorian Gold Mines.

I have just returned to Northern NSW after travelling to Beechworth to do family research. My Great Grandfather was Thomas Augustus Connolly and his brother Michael Connolly where partners with Hiram Crawford. Thankyou to all the volunteers that made my rresearch easier espicially Michael, Catherine, Daniel and Cameron.
I'll be back
Sue

I admire people who have the skills to do something like your blog. These sites are a boon to researchers and family historians.

I am the great-granddaughter of Hiram Crawford who started Crawford & Co coaches. Over the past 13 years I have researched the history of this company in depth and also the life of Hiram.

There are two errors in this post. Firstly, yes Hiram did build stables behind the Commercial in 1859 which operated for 30 odd years. However in 1891 it burnt down and the present stables were built.

Hiram never had a coaching service between Melbourne and Beechworth. He did operate a cartage company for a while between those towns. He did however work in conjunction with Watson Hewitt operating his section between Chiltern and Albury, then connecting to WH’s coach to Melbourne in Chiltern. Hiram did own the longest surviving coaching company in Victoria- it covered all of the northeast over years stretching from Echuca to Corryong, Bright, Wangaratta, Albury and all areas in between. It extended into southern NSW covering much of the Riverina area.


To the rear of the building are the coach house and stables which were built in 1859 by the American Hiram Crawford who established his firm and a coach-building works, with Tanswell's acting as the booking office. Crawford's was the most successful coaching service between Melbourne and Beechworth in the 1850s.

excellent... I will go back to the post straight away and make the changes.

I hope history students following up the links to OLD NEWS TODAY:
TALES OF THE UPPER MURRAY. Well done.

Built as the Beechworth Athenaeum in 1857, The Robert O’Hara Burke Memorial Museum is one of Australia’s oldest museums with significant collections from the 1800’s on. After the death of Beechworth's former Superintendant of Police at Coopers Creek in 1861, the Athenaeum was renamed in his honour.

The Chinese Collection reflects the history of the Chinese mining community in Beechworth from their arrival in the aftermath of the Buckland Riots in 1857.

The discovery of gold at Beechworth in 1852 dictated the dramatic development of the town and surrounding area. The Gold Collection also presents the rushes Spring Creek, Pennyweight Flat, Woolshed, Nine Mile and Three Mile.

The town might not be the biggest in rural and regional Australia, but it has certainly figured in the most important events in 19th century history.