Orientalist Art: males in the harem

Charlotte's blog wrote about The Lure of the East: British Orientalist Painting at the Tate gallery in London (June-Aug 2008). The exhibition brought together paintings by British artists of the Orient i.e eastern Mediterranean countries under the control of the Ottoman Empire till WW2, although most of the paintings were 19th century. 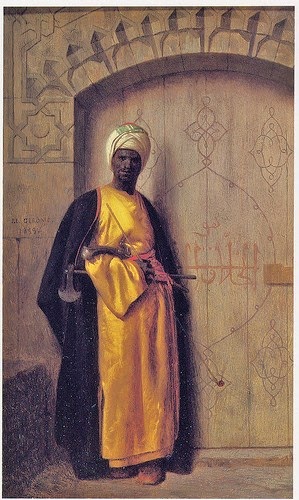 Gender issues were important. A number of themes structured the exhibition: Orientalist portraits demonstrated the fashion for adopting the dress of foreign countries by travellers like T.E. Lawrence; Genre and Gender explored the gendering of public and private spaces, although Charlotte felt this was more fully covered in the section on Home and Harem which drew attention to female travellers who could, unlike their male counterparts, access exclusively female places like the harem.

Not surprisingly, the idea of an all female harem, representing beauties in lavishly appointed settings fed the imagination of C19th artists. This was to such an extent that there were many images of women reclining, bathing or being bathed, and exotic dancers. But were strong, handsome and possibly dangerous males depicted as well? 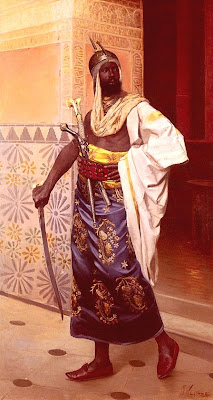 The Harem Guard by Jean Discart 1885 was magnificent in its de­t­ail and exotic in its subject matter. Guards of the Harem by Ludwig Deutsch depict­ed the never-ending boredom endured by these colourful men. Rudolph Ernst's favour­ite compos­it­ional technique of depicting his subjects from a low perspective, heightening their grandeur and presence eg Guard at the Harem. Note the favourite props that reapp­eared often, such as the Indo-Persian helmets, shields, exquisitely embroid­ered green silk fabric and ornate faience tiles.

These men were far from weakened, effeminate eunuchs. The guards, as depicted by the European male artists, had determined, masculine faces and bodies. Plus they carried nasty weapons. One of my favourites is in Images by Gro. Standing in front of an arch that closely resembles the architecture of the Alhambra in Spain, the Moorish Chief by the Austrian artist Eduard Charlemont does indeed exude power and mystery. Another is in Painting History. 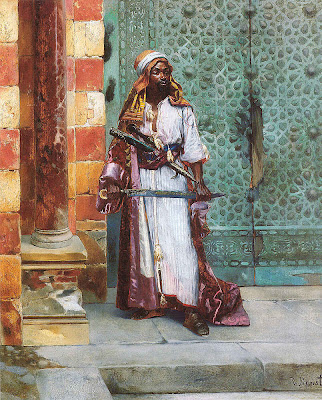 The Orientalist Gallery has an unusual image of a handsome male, lounging in front of fire place alongside an equally handsome and very alert tiger. The Sheik's Favourite by Rudolph Ernst was fully armed, like the other males in this article, but presumably his favourite status allowed him to guard in comfort.

Thanks for visiting my Orientalist Gallery and referring the site.

I like some of these Arab men. They're very aristocratic and manly!

These are MOORS not Arabs, BIG DIFF & i think these are all nice moorish painting & a nice site by the way to. Thanks!!!

Thanks everyone.. I also think those guards are rather handsome and glamorous :)

I have since added a link to The Palace Guard (1902) by the Austrian painter Ludwig Deutsch in the blog called Painting History.

I have of recent been trying to find out about these Nubian harem/palace guard and I couldn't find any historical evidence on them during the time of the Mamluk Sultanate.

Know the native Egyptians were not allowed to serve in the army and were for the most part second class citizens. But did this extend to the Nubians bearing in mind that some Nubian people could be considered Egyptians (could be very wrong)?

With the fall of the Mamluk Sultanate to the Ottomans in the early 16th century Egypt is now a Eyalet under Ottoman administration.

The image of a Nubian harem guard now seems more plausible due to the fact that the Ottomans made extensive use of African eunuch's, Sudan being a popular recruitment ground.

So to finish it up were orientalist artists such as Ludwig not painting from first hand? But rather heightening the grandeur of North Africa and the Middle East through props and various mediums (plus his personal travels)?

P.s the reason why I mentioned the Mamluks is because if you look at their armour, helmets and the way they holstered their weapons, they are near identical to the way the Nubians are depicted in these paintings.

thanks for your thoughtful comments. I think you hit the nail on the head in your last line: orientalist artists such as Ludwig did indeed travel to the countries they said they were visiting. But not every single scene was painted from first hand experience.

What was the chance of an Ottoman sultan allowing a Christian European artist into, or even near his harem? None!

When you get further in your research, I would love to hear your findings. Again thanks.