In late-Victorian Britain, I read the interwoven tale of two very different young men: George, the son of a Midlands vicar and Arthur, growing up in well-mannered Ed­inburgh. George, determined to make his life’s work in Law, accidentally became involved in a series of nasty and cruel tricks played by local lads. Arthur studied medicine and made his mother happy, while eventually finding out that medicine wasn’t what he really wanted to do.

I am passionate about Barnes books, although in this book I found the two concur­rent-but-not-intersecting stories frustrating. It took a very long time before Sir Arthur Conan Doyle dealt with his wife’s illness and his would-be lover, and was available to move to the very heart of the job in hand. Finally the unrelated lives started to dovetail. George’s family - caring, moral, passive, foreign, fatalistic and in the end inept - could do nothing to save their beloved son and brot­her. Only the author of the world’s most famous detective could save Innocent George. 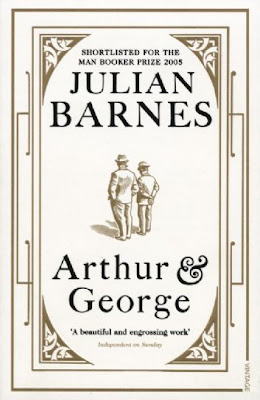 By the time I had finished the book, I still had no idea if the story was totally fictional, a fictionalised version of a real court case or a well researched, unsensationalised version that really did mes­merise Britain at the end of the C19th. Only when I read the Baby Got Books blog and the dylanwolf reviews did it become clear that the events referred to the infamous Great Wryley Outrages.

Since the story was a fict­ionalised version of actual events, all the more credit to Barnes for handling the big issues of the day: coloured migration, life in the Church of England, increasing role of women in society and British system of justice. Even with these big issues, a summary of the book looks pathetic: Sir Arthur Conan Doy­le, inventor of Sherlock Holmes, lived in Undershaw in Surrey. Doyle met and assisted George Edalji, a small town lawyer in Staffordshire convicted of a crime he didn't commit. End of story. Spiritualism was almost an afterthought in the book, not tackled until the protagonist died.


We need to note that while mediums and magicians might have been fascinating to ordinary families, a surprisingly large number of Victorian scientists and literary figures also became enmeshed in the spiritualism controversy. On the side of the sp­ir­itualists were famous names like Arthur Conan Doyle, Charles Dickens, Anthony Trollope and George Eliot; Charles Darwin remained a sceptic.

Victorian Spiritualism struck me as somewhat unlikely concept, giv­en the Victorians passion for science, , progress, classification and rat­ion­alism. But The Haunted History Blog suggested that the two were not really incompatible in the Victorian mind. Like many other scien­t­ists in the Victorian era, Spiritualism proved to be an att­ractive opport­un­ity for a particular intellectual (Alfred Russel Wallace) to ex­pl­ore his scientific inquiries. His theory on evolution included the notion that the higher facul­ties of man need more than just Nat­ural Selection for develop­ment. A divine presence was behind Natural Selection, so Spiritualism was where an intellectual could search for answers. 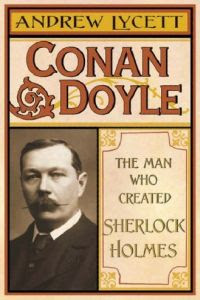 Andrew Lycett, in the The Man Who Created Sherlock Holmes, agreed. The central paradox of Arthur's life was that this trained doctor and inventor of the super-rational Sherlock Holmes fell completely in thrall to spiritualism. Séances, spirit photos and other weird phen­omena that Holmes would dismiss as mumbo-jumbo proved an endless fascination. Conan Doyle regarded spirit­ual­ism as "a natural exten­s­ion of science." Both Conan Doyle and Holmes personified the Vict­or­ian ethos that sent forth reason to make sense of a confusing and newly godless world.

By the way, the film Dean Spanley (2008) covered the same territory with the same elegance.

Since this post was written in March 2009, David Edgar has adapted the novel Arthur & George for the stage. First shown at the Birmingham Rep and then to the Nottingham Playhouse, the strange but true story was apparently much easier to tell on paper than it was to produce for theatre-going audiences. A review in Country Life (31st March 2010) said "the stage adaptation is an awkward mix of detective story, psychodrama and comic pastiche, with a dash of courtroom drama thrown in." Just so!

Thank you for visiting and commenting, Hels. I do agree there are important differences between this drama and some of the others I've discussed on this blog - the nearness in time and wreckage of real lives, as you say. But I've always been interested in looking at a wide range of costume/historical dramas, not just adaptations of classic books, though those do hold a particular fascination for me.

I'm sorry I left it too long after viewing to write a proper review of this series, but I do agree that the focus on how lives, relationships and careers were destroyed is powerfully done, and that much of the series is heartbreaking.

I haven't seen 'Dean Spanley' as yet but would like to do - I already wanted to get hold of it after reading 'Arthur and George', and am now keener to do so than ever after going over to your blog to read your review.

A murder in Glasgow in 1908 led to the accused being found guilty and sectenced to death. I am now reading the 1912 book where Sir Arthur Conan Doyle pleaded for an overturn of the verdict because the police had witheld evidence. The so-called murderer was released a free man after 19 years in gaol.