The 2006 Exiles and Emigrants Exhibition in Melbourne was set up to tell the emot­ional stories of the greatest Diaspora in Western history; it was the first time art and objects produced in Queen Victoria’s reign (1837-1901) were used to tell the story of the unprecedented exodus of c15 mill­ion people from Britain. The exhib­ition traced the reasons that drove people from their homeland, their long and diff­ic­u­lt voy­ages, and their struggle to settle in the harsh and often unforgiving Australian climate. The feelings of fear, pain and displacement at leaving one's homeland for a country so foreign and far away were re­v­ealed in these paintings, the National Museum dir­ect­or said.

So why am I interested in a non-British, non-Australian artist who concentrated on society portraits? 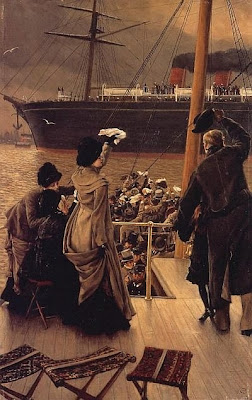 James Tissot (1836-1902) was born in Nantes. He was raised in a French seaport city and throughout his career, he impressed with his painting of ships, rigging, ports and water. He studied art at Beaux-Arts in Paris and following the French defeat in the Franco-Prussian War, Tissot chose to move to London. There he paint­ed highly finished, beautiful paint­ings of London society.

Many bloggers have turned their attention to Tissot. Scholars and Rogues blog in ArtSunday: love among the ruffles noted that until his lover’s death by suicide in 1882, Tissot was a society painter exiled from high society, who worked for and sold to the successful merchants, bank­ers and brokers of London. “Paint­ings of vulgar middle-class boating parties, port­raits of overdressed ironmongers’ daughters and their pomaded swains in brand-new suits”, sniffed Ruskin.

Still Tissot worked, in constant demand, and in doing so created a marvellously detailed record of a very specific time and place, a can­vas history of dress, manners and values. As Cris, Artist in Oregon noted Tissot’s parents had run a clothing business in his youth and he was something of a dandy himself.

Hollister Hovey found fine portraits of men by Tissot. Not male partners and staff, helping women in their activities, but men as the sole focus of portraitly attention.

Lines and Colour blog noted that Tissot was also an accomplished etcher, having learned much from Whistler.


Mardecortesbaja was particularly on-topic for me for since the blog focused on Tissot’s attraction to the Port of Lon­d­on and the river Thames. Tissot loved the Thames, its ships and bustle. It may have taken him back to his youth. The blog’s example, Two Friends, was especially dynamic, with its small boat moving forward into a space in front of the picture plane as the taller ships lead our eye backward into the space of the painting, rein­forcing the sense of movement. His paintings with the river as the back­ground have an evocative atmosphere. I agree that a viewer could almost smell the smoke, and hear the shouts of the dockers and watermen.

In my pursuit of emigration art, Tissot’s dockside pictures were an important part of his desire to paint a unique­ly British subject: the Victor­ian problem of emigration. And, it should be noted, all the emigration paintings were created during Tissot’s 11 years in Britain.

They pointed to the sad rest­less­ness of the people waiting on the docks with steamer trunks in By Water/Waiting at the Dockside 1881 and to the tearful waves of those left behind on Goodbye on the Mersey. The central theme of this painting was the leave-taking of a loved son and fiance. 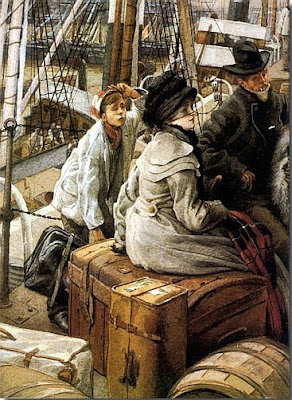 View the woman climb­ing aboard the ship in The Emigrants c1875. The image showed a woman carrying a small child and a bundle on her left arm, standing on the deck of a ship looking down. There were men in front and behind her but the woman seemed to hover, perhaps because her husband had gone on ahead of her to ? Australia. While she and her child were emig­rating to find a better life, the voyage itself was both dangerous and lonely. Tissot maximised the dramatic backdrop of masts, ropes and flags.

As difficult to find as these images are, the theme of emigration and the conditions that forced people to seek a life overseas fascinated Tissot. Clearly he was interest in the drama of severing ties with one’s native land. In The Two Friends c1881, a man stretch­ed to shake hands with a soldier who leaned out from the rigging of a steamer that was about to pull away from the dock. Other figures engaged in leave taking remained along the edges.

I value Patricia Tryon Macdonald (ed)'s work Exiles and Emigrants: Epic Journeys to Australia in the Victorian Era, the well written, well produced  catalogue of the exhibition held in Melbourne (from late 2005) and then in Canberra (in 2006). Other recommendations, which I have not read myself, include Eric Richards' Britannia's Children (2004) and David Fitzpatrick's Oceans of Consolation (1994), and Jordana Pomeroy et al., Journeying Women: Victorian Women Artists Travel, Lund Humphries, 2006.

Thank you Hels for linking my blog post about Tissot to yours. It was nice to learn more about him here. I had bought a very small museum book for my information altho there was a bigger one to buy. For a bigger price too at the time. :)
he was an awesome Artist.

Cris, get hold of the catalogue put out for the exhibition called EXILES AND EMIGRANTS: EPIC JOURNEYS TO AUSTRALIA IN THE VICTORIAN ERA. Published by the National Gallery of Victoria, the images are finely reproduced and the text is not bad either.

I know nothing of these books but I thought they might be useful for your blog:

Exiles and Emigrants: Epic Journeys to Australia in the Victorian Era (NGV Melbourne, 2006)

Have a good holiday and thanks for your great blog which is always interesting.

thank you so much. The NGV catalogue was already a much loved reference, but I did not know Journeying Women: Victorian Women Artists Travel. I have also added two more relevant books.

Have a healthy, happy new year!