Melbourne Then & Now by Chapman & Stillman is a super book. It shows why visitors to Melbourne in the 1880s were amazed. Here in the Southern Hemisphere was a city larger than most European capitals. In just a decade the population had doubled, to half a million people. Citiz­ens strolled the streets, bursting with pride as their city boomed. Ornate office buildings up to 12 storeys high rivalled those of larger, older cities overseas.

Money was poured into lavishly decorated banks, hotels and coffee palaces. Towers, spires, domes and turrets dominated the city sky line. Lace work appeared everywhere. Cast iron was used to decorate verandas, which grew from one to two stories. By 1870 Australia was producing its own lace work which began to feature Australian flora. During the prosperous 1870s-80s speculative builders built thousand of tightly packed ter­races in the inner cities to cope with a rapid­ly growing popul­ation distinctly Australian in style.

A partic­ular feature of the city's boom years were the temp­erance hotels/coffee palaces. A small number of hotels had al­ways ref­us­ed to sell alcohol. But the coffee palace, as a viable al­tern­at­ive to hotels, was a Rechabite concept introduced to Melbourne in the 1880s. Coffee palaces were actually much grander and more multi-purpose than pubs.

So the cons­truction of buildings for the temperance movement coin­cided with a economic boom in Australia and use of rich­ly ornamental High Vict­or­ian architecture. I love the high-status names that these hotels were given eg The Grand or The Royal, suggesting that clients should be well dressed and well behaved.

First known as Victoria Coffee Pal­ace 1880, the Vic Hotel was founded by a Temp­erance League as an alternative to rowdy, bawdy pub accommodat­ion. The original lobby is still in use today.

An extravagant temperan­ce hotel, designed by Charles Webb in the Second Empire Style, was the Grand Hotel (1883) in Spring St Melbourne. Now called the Windsor Hotel, it was built for a shipping mag­nate who in the late 1880s sold it to a Tem­perance Party sup­porter. At first having 200 rooms, this Second Empire style building was extend­ed to 360 rooms to accommodate overseas and interstate visitors to Melbourne’s 1888 Centenary Exhibition. 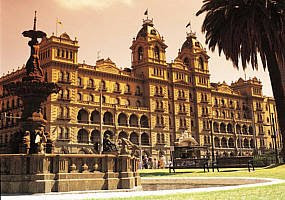 The Federal Hotel at the corner of Col­l­ins and King Sts Melbourne was another exam­ple of French Renaissance design by William Pitt. The Federal Hotel was su­p­erseded in the land-boom, when the Federal Coffee Pal­ace 1888 was built, also by Pitt, but in a far more opul­ent high-Victorian manner. In fact this massive, opulent building best epit­omised the specul­at­ive land boom which was 1880s Marvellous Melbourne. 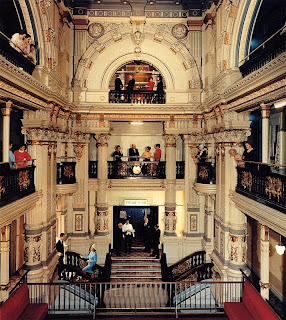 The Federal had 7 floors crowned by an iron-framed domed tower. Bed ­rooms were on the top 5 floors, while the lower floors contained maj­estic dining, lounge, sitting, smoking and billiard rooms. There were 6 lifts, gas lights, electric service bells and a basement ice-making plant. The temperance movement fell out of fav­our in 1890s and the Federal Coffee Palace became the Federal Hotel which was licensed in 1923. The irony of licensing a coffee palace was not lost on temperance supporters, but at least it kept the building alive and in use. Eventually, however, the entire building was dem­ol­ish­ed in the 1970s.

Coffee palaces really survived best in beach suburbs of Melbourne. The Victoria Hotel in Albert Park, now converted into flats, looks over the sand and sea. The palm trees gave the coffee palace something of a tropical feel. 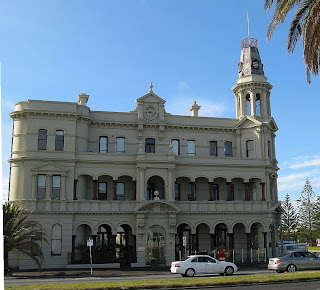 
And they survived well in country resorts where, even after the inter­est in temperance had faded, families still needed good quality, clean places to stay. Many of the truly beautiful hot­els in Queenscliff, for example, had started life as coffee palaces and temperance hotels. Once the railway line from Melbourne reached this beach town in 1879, many splendid places went up within a very short decade, including Baillieu Hotel (1881), later renamed Ozone Hotel. 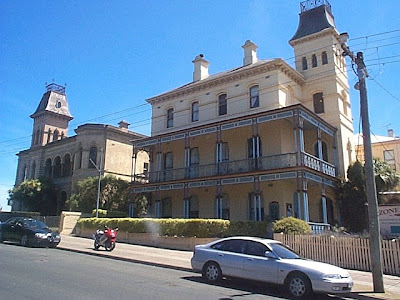 
The "Humble" Blog mentioned that the principal building at Barwon Heads in 1893 was the Coffee Palace which, although only three years established at the time of writing, had won golden opinions from its numerous patrons. The palace had 34 bedrooms, parlours, dining room and sitting-rooms. A different Humble ancestor, a zealous Methodist, staunchly supported temperance and was a director of the short-lived Geelong Coffee Palace Co. in 1888-89.

Warrnambool’s truly splendid Ozone Coffee Palace was erected in 1890 during the fashion for temperance hotels. By 1910 the palace was struggling financially and was in very bad condition; by 1915 the building was closed and remained so until 1920 a local business­man installed a picture theatre and ballroom and reopened it as the Hotel Mansions. Nothing remains of Ozone Coffee Palace today. 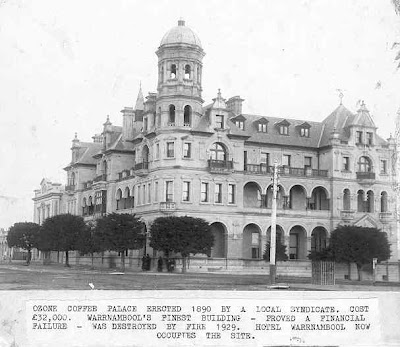 Because the coffee palace movement was strongest in Victoria, it is more difficult for me to find histories and photos of coffee pal­ac­es in other states. But clearly there were several very fine build­ings in Sydney, Launceston and Hobart etc. Grand Central Coffee Palace Hotel in Clarence St Sydney, for example, seems to have been operating by 1889. Alas we catch only glimpses of it. Labour Hist­ory mentioned that “protesters paused for speeches outside the Hotel Australia and the Grand Central Coffee Palace, where the well-heeled had gathered for the evening” (1893). 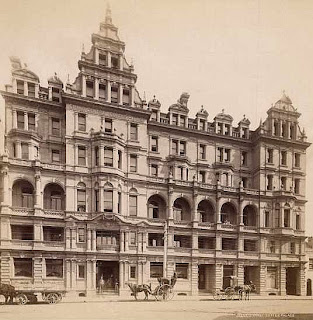 
People love coffee but it seems difficult to keep their interest in temperance for very long. And I don't suppose the terrible recession starting in 1893 helped. Timing is, of course, critical.

Hi Helen,
No problem link to or from any of the data on humble.com.au that you want

I copied from somewhere (reference was noted) and didn't really know much about coffee houses but found out old man "William" Humble was a Methodist Tea Totaller.(That led me to the coffee house)

I know the "family" used to go to Barwon Heads in the first Motor Car Ever Assembled in Australia. The Car was made at the Humble & Sons / Humble& Nicholson Foundry.

Use this link in your website as it will take people directly to the coffee house info and skip all the boring stuff...
http://www.humble.com.au/index.php?/archives/23-The-Coffee-Palace-Direct

I wonder if you have any photos of the Melbourne Coffee Palace(1879) and the Federal Coffee Palace (1888), both gorgeous buildings as far as I have seen.

Were there any other William Pitt designed buildings that have been destroyed?

Welcome hels, check out these links on this same forum for more:

When my dad was young he (and his brother, father and grandmother)lived above the Albert Coffee Palace in Geelong. I can email you a photo of the builing if you like. The building was demolished and is the Bay City Plaza.

My great grandmother, Margaret Adeline Jones nee Neil, opened a guesthouse called Berrigan Coffee Palace in November 1896. It is advertised on the front page of the Berrigan Advertiser though these later months of 1896. Does anyone have information or photos?

adele, I haven't come across the Berrigan Coffee Palace myself, but your note raises an interesting issue.

I can imagine a large city like Melbourne being able to support a few non-alcoholic alternative institutions to pubs. I can also imagine that popular holiday resort towns like Barwon Heads could support a coffee palace.

But in Berrigan, competing with pubs would have been a more gutsy decision by your great granny. I think she was very wise in making it a guest house, rather than a non-residential coffee palace.

Alison, I would love a photo of the Albert Coffee Palace in Geelong, as it was before being destroyed.

Came here from On the Convict Trail. I didn't know the Victoria Hotel in Albert Park began life as a coffee palace.

It is inevitable that in a booming modern city like Melbourne (half a million people before the 1893 Crash), grand coffee palaces would be designed and built all over the place. It has been estimated that by 1888 there were more than 50 coffee palaces _in Melbourne alone_, mostly converted to something else after WW1. I already knew about Victoria Hotel in Albert Park, but I bet there are many others we don't know about.

SPRING 1883 is delighted to return to The Hotel Windsor during Melbourne’ Art Week, presenting the best contemporary art from the region and beyond. SPRING 1883 offers free admission during its public opening hours during the week of 17th-21st August 2016.

Important people stayed in the Victoria Coffee Palace, not just because it was a temperance centre, but because it was VERY luxurious. And because its porters were sent to meet guests arriving by ships at the ports and by trains at Spencer Street Station.

I am guessing that the Palace didn't change its name to Victoria Hotel until the first liquour licence was issued in 1967. After that, there was alcohol all over the city.