The Art Nouveau style appeared in the early 1880s and was gone as WW1 was starting. For a brief, brilliant moment, Art Nouveau was a shin­ing artistic light in Europe’s city centres, urbane and of its time. Perhaps artists, architects and craftsmen examined the rapid urban growth and technological advances that followed the Industrial Revolution, and hated them. 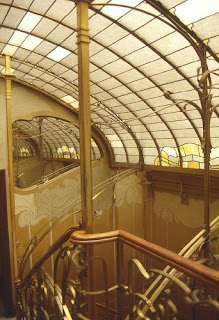 In 1895 in Paris, the name of the Art Nouveau movement was fin­al­ly accepted because of the art gallery La Maison de l'Art Nouveau, which was opened as a showroom for the new art of Siegfried Bing. Paris added also a touch of glamour to Art Nouveau with the Divine Sarah Bernhardt and her men: Alfons Mucha and René Lalique.

Paris hosted the 1900 World Fair, which particularly helped to make Art Nouveau famous. Art Nouveau would have entered the inter­national art and design scene anyhow, but now a very wide audience was thrilled by Art Nouveau at Paris’ World Fair and by the opening of Paris’ Metro stations. 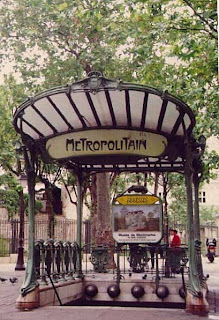 This rich, voluptuous style appealed to a wealthy elite whose taste en­couraged designers to innovate. The overall sense of Art Nouveau was utterly feminine and exuberant in form, colour and line; the typical shape was a flowing curvy line, especially vines with twirling tend­rils or a nymph with flowers in her thick flowing hair. Friv­olous or not, the style's patterns and motifs were taken primarily from nature.

The question here is did CRM, a man who started his career in the midst of Art Nouveau, end his career in a more modernist style? Consider when CRM was study­ing and when he first started work. CRM attended evening classes at the Glasgow School of Art in the late 1880s. The creative environment of the Glasgow School was central to the young man’s artistic development. Luckily this school was one of UK’s most succ­essful and progressive in the 1880s and 90s. After complet­ing his apprenticeship, young CRM quickly moved to the architectural practice of Honeyman & Keppie in 1889.

Early in his career (in 1896) CRM was asked to design the wall murals of Miss Cranston’s new Buchanan St tearooms. The tearooms had been designed and built by one architect, with interiors and furn­ish­ings being designed by another. CRM only had to design Art Nouveau friezes; they depicted opposing pairs of long female figures surrounded by roses, for the ladies’ tearoom and the luncheon room.

In 1898, his next commission was to design the furniture and interiors for the existing Argyle St tearooms In 1900 Miss Cranston commiss­ioned him to redesign an entire room in her Ingram St tearooms, which resulted in the creation of the White Dining Room. Patrons entering the dining room from Ingram St had to pass via a hallway separated from the room by a wooden screen with leaded glass inserts.

Then CRM created new tearooms in Sauchiehall St in 1903: the exterior architecture, interior design, the internal layout and furn­iture. The final building came to be known as the Willow Tearooms. The ladies' tea room at the front was white, silver and rose; the general lunch room at the back was panelled in oak and grey canvas, and the DeLuxe tea gallery above was pink, white and grey. You can see Art Nouveau elements on the doors, windows and table legs. 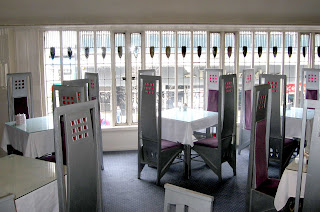 The tea rooms marked the first appearance of CRM's trademark high-backed chair design. But look how modernist it was, not a curve to be seen – it was in dark oak wood with geomet­ric­al shapes, perp­end­icular slim lines. Already his elegant decorative interiors comp­lemented his wooden furniture, designed with minimal decorations, such as brass fittings or leaded glazed glass panels. They may have been enriched by a stylised rose but no Art Nouveau rose had ever looked like this. 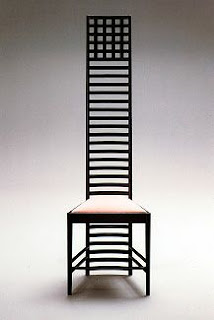 The Textile Blog has shown in Charles Rennie Mackintosh and Windyhill that Windyhill was the first private home project that CRM took total responsibility for, and while somewhat cautious and tentative compared to later homes, it did have many of the elements of a later, fully fledged Mackintosh design. He started the project in 1900 and finished it by 1901.

In 1901 Charles and Margaret entered a competition in a German de­s­ign magazine to design a House for an Art Lover. The drawings were pub­lished in the magazine Deut­sche Kunst while the full portfolio was published in 1902 and exhibited at the International Exposition in Turin. But until 1988, the plans remained just plans. Then the house was built, by Glasgow City Council, to the original Art Nouveau specifications.

In the House for an Art Lover, the external walls are painted white and the two main facades are decorated with a few Art Nouveau relief sculptures of female cary­atids sculpted in sandstone. The Dining Room, a room with dark panels that follow the style of the sombre main hall. The table with the high-backed chairs provide the focus in the dining room. Then there is a very light room, the Music room, where light streams in and shines off the light walls. 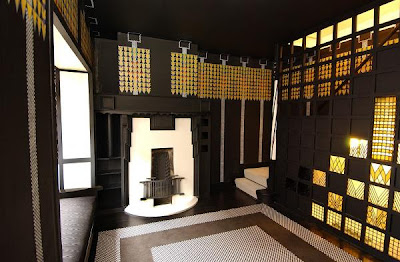 Finally we get to 78 Derngate, a Georgian terrace house in Northampton, CRM didn’t ext­ens­ive­ly remodel it until in 1916-7. By that time, Art Nouveau had run its race and the owner, Mr Bassett-Lowke, probably preferred a geometric, more modern­ist style anyhow. But CRM dec­orated the hall-lounge and bed rooms in striking matte black and bold, unrelenting stripes. Even the stairs were walled with a grid of opaque glass squares to admit light. 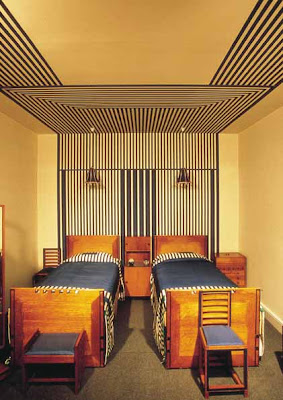 Note that the very modern style at Derngate was similar to that of the Library at Glasgow School of Art, which had been complet­ed 9 years earlier. CRM was reusing and refining a new style he already loved.

As time went on, CRM employed bolder geometric forms in place of organic-inspired symbolic decoration. Was Mackintosh a revolutionary, delaying the modernist programme with a call to organic architecture? My own guess was that he was a traditionalist whose version of Art Nouveau was always more geometric than other artists'.

Charles Rennie Mackintosh: Plumbing Life’s Depths blog had thought Mackintosh was using the power of implication and minimalism to introduce the organic and human back into a sterile architecture. Istead he seemed to have been a reasoned modernist picking his way from an organic (Art Nouveau) tradition toward a more modernist programme. Finally Woken blog agreed, saying that Mackintosh became known as the pioneer of the modernism, although his designs were far removed from the bleak utilitarianism of Modernism.

And another thing. CRM’s last major commission came in 1916 and after that, his financial situation became more dire. What had happened to that era’s most popular British architect and designer?

Great overview of Charles Rennie Mackintosh. I've found that my interest in architecture has broadened since I first started looking at Art Deco buildings not only because of the breadth of buildings that can fall under that term but also because of the overlapping and influence of works from different periods and architects.
CRM falls into this category. I like much of his work, especially the clean lines of the bold geometric designs.

David,
I am increasingly looking back on the 20 most active years of CRM's career (1896-1916) and being mesmerised by his following change, or perhaps leading it.

His later work was, as you note, bold, geometric, masculine, modern, international.

In 1896, the Free Church of St Matthew commissioned a new congregation, Queen's Cross Church. It was Mackintosh's only completed church design. After the congregation dwindled in the 1970s, the Free Church vacated the premises and the Charles Rennie Mackintosh Society purchased the building for architectural pilgrims rather than religious ones.

Thank you. Why did he not receive commissions for other churches? or if he did, why was it the only "completed" church design?