A Passion for Building Art Deco

I can totally understand why all pleasure palaces built from the late 1920s until the outbreak of war in 1939, especially cinemas, would want to be Deco.

Firstly Art Deco theatres were responding­ to the hard times in which they were built; the misery of the Great Depression could hopefully be kept outside. So cinemas were designed as palaces where ordinary people could escape an often dreary and poverty -stricken reality, even if it was only for 2.5 hours a week.

Secondly theatre architecture might have reflect­ed the content of the film up on the screen. Films from 1929 on tur­n­ed to romance and allure; Ginger Rogers and Fred Astaire danced their way across modernist Art Deco sets. Greta Garbo sipped sexy cocktails from glamorous deco cabinets. 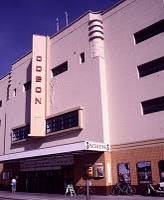 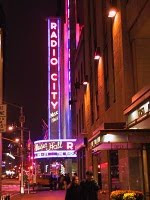 On the outside of the cinemas, there were 3 external elements that be­came the hallmarks of Deco: the vertical blade (eg Odeon, Cheltenham), the marquee porch (eg Metro, Sydney) and neon lights (eg Radio City Music Hall, NY). By the late 1920s, neon signs were a per­fect match for streamline moderne architectural trends: glass walls, chrome trimmings and sweeping curves.

Examine The Enmore Theatre in Sydney, built in 1908 but totally renovated in the 1920s. It displays every Deco element that made the theatre a landmark of the time. Sadly many picture theatres didn't survive. For an image of the fabulous art deco taste of Kings Bondi Beach Cinema, built in 1937, see Scratching Sydney's Surface. You can also see the gorgeous Paramount Theatre in Washington St Boston, designed by Arthur H Bowditch and constructed 1930-32.

Inside a theatre, designers used sweeping cur­ves, large spaces and impressive staircases (eg Astoria, Brixton). For decoration, metal designs, décor­ative plaster, tile work and colourful murals appeared in the lobby and auditorium, as in the Rivoli in Melbourne. A huge Wur­lit­zer organ might rise up from under ground and play to the crowds. The Grosvenor Cinema was built in Rayners Lane London in 1936. Al­th­ough no longer a cinema, this building’s interior has not been denuded of its Art Deco elements. The auditorium still has deep coved ribs and a proscenium arch flanked by fluted columns. Very theatrical! 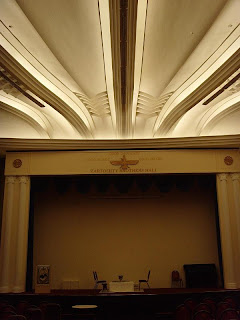 
And I can understand why, from 1929 on, petrol stations (eg Tuscon USA) would want to stand out in the crowded streets. Impressive Deco arch­itecture, glazed ceramic tile walls, neon lights and vertical blades made filling the car up with petrol a glam­or­ous experience. Even bus stations (eg Evansville Ind USA) became palaces of inter-city transport. Neon lighting, invented by French physicist in 1902, was 3 times brighter than incandescent bulbs of equal power, cheap to run, more colourful and lasted longer. 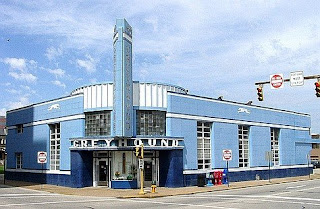 
Greyhound bus terminals appeared for the first time as a boom product of middle and late 1930s, so they have been Deco simply because of timing. But Greyhound wanted to be highly visible, so the company chose dramatic architecture, bright colours, neon lights and corner positions as a way of making themselves stand out. As you can see from the images, they bus stations shared with the cinemas a vertical blade, long verandas and often neon lights. The former Greyhound Bus Station in Blytheville Arkansas was built 1938; a now-demolished station in Cincinnati, Ohio was built probably a year later. 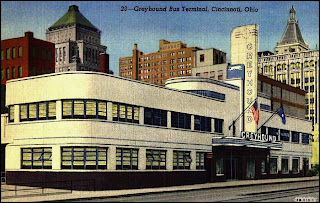 Hi Helen Enjoyed your post. One of the major reasons for the use of Deco/Moderne style in cinems was cost - both construction and maintenance. Compared to the elaborate picture palaces of the 20s, the cinemas of the 30s/40s were simpler, could be built pretty much to a formula, and used plain surfaces and materials that were easy to keep clean (and did not gather dust!), and the large neon signs assited greatly with attracting customers - often aimed at motorists, particulrly in the USA. Same principles applied to petrol stations and garages.

Thank you for such an interesting post, I particularly enjoyed the Art Deco information about the movie theatres. xv

I'm glad you brought this post back to my attention. I had forgotten it featured an interior shot of the Grosvenor in Rayners Lane. Great to see this fantastic decorative features still in situ.

What a lovely blog. I've just spent several pleasant hours on it.

Again, it's always so lovely to find that someone of similar aesthetic sensibilities has provided, free of charge, a visual feast such as you have done. It's the internet at its very best. Many, many thanks.
Karen

Helen said...
Karen, excellent :) In the article you refer to, there is a wonderful image of the Greyhound bus station in Jackson Miss, with art deco designs. What a joy.

thank you. I have gone back and added a reference to one of the most elegant of the old picture palaces, now destroyed - Kings Cinema, Bondi Beach Sydney.

One cinema I have never seen but now love the look of is in Darlington, built by Oscar Deutsch in 1932. See Adrian Yekkes' post at http://adrianyekkes.blogspot.com.au/2016/02/darlington-majestic-art-deco-cinema.html