I know all the main Bauhausers and can recognise a Gropius, Mies, Klee, Kandinsky, Feininger, Moholy Nagy, Stölzl, Bayer, Breuer, Marianne Brandt and a Marguerite Friedlaender at 100 metres away.

Most of the Bauhaus students and staff left Germany in the 1930s and made their names in Britain, Israel and the USA. Only one Bauhaus graduate made his life in Australia and yet I cannot even find a Wikipedia entry for him.

Ludwig Hirschfeld-Mack (1893-1965) was born in at Frankfurt am Main, son of Ernst Hirschfeld, a manufacturer of leat­her goods, and his wife Clara Mack. After attending the Muster gymnasium at Frankfurt am Main, Young Ludwig studied arts and crafts at the Debschitz Schule Munich, and attended lectures in art history at Munich University. Conscripted into the German Army at the outbreak of WWI, he was prom­oted lieutenant and won the Iron Cross. He got married in 1917.

After the war, Ludwig attended the Stuttgart Academy where he was introduced to colour theory and print-making. In 1919 he enrolled at the Weimar Bauhaus where he studied under the star teachers: Johannes Itten, Paul Klee, Wassily Kandinsky. Hirschfeld-Mack's main activities at Bauhaus focused on the problems of colours and colour projections. With his didactic toys, for example, he demonstrated how the rotation of the top produces the optical mixing of the colours that were printed upon the laid-on plates.


Hirschfeld-Mack was apprenticed to Lyonel Feininger in the print work­shop, completing his training in 1922 and concentrating on the application of colour theories. It resulted in his best-known achievements at Bauhaus, colour-light plays. Hoping to capture the actual movement implied in the illusionary tensions of abstract art, he built and operated an apparatus that combined moving projections of coloured light, mechanical templates and music of his own compos­ition. Young Ludwig must have been an impressive musician in his own right.
He published a booklet, Farben Licht-Spiele, Wiesen-Ziele-Kritiken 1923 and gave travelling performances 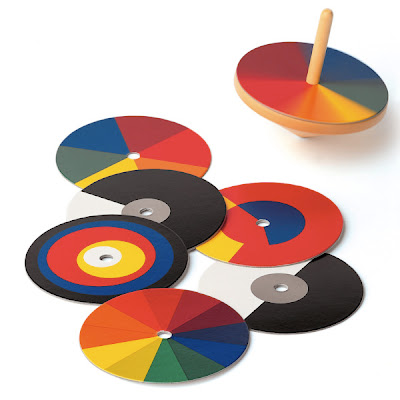 When the Bauhaus moved to Dessau in 1925, Ludwig remained at Weimar and taught in colleges before moving to Berlin in 1934. The rise of the Nazis forced him to leave Germany for Britain from March 1936. There he taught in a prep school and developed large-scale, projected-light advertising projects. He lent a number of his works to Museum of Modern Art New York for its 1938 Bauhaus retrospective.

In one of those appalling ironies of war, Hirschfeld-Mack was deport­ed to Australia as an Enemy Alien in the SS Dunera in 1940. He was interned in 3 prisoners’ camps (Hay, Orange and Tatura). There he made a number of woodcuts that illustrated life for the prisoners.

Released in 1942 through the sponsorship of Geelong Grammar’s head master, Hirschfeld-Mack was appointed the school’s art master. He promoted his pupils' self-knowledge, introduced them to avant-garde painting techniques, and encouraged wood-carving, instrument-making, weaving and leatherwork. He retained the Bauhaus principles of self-knowledge, economy of material, and reform of society through art.

As in Bauhaus itself, Geelong Grammar’s art school provided scenery, lighting and displays for plays and exhibitions, pottery for charity stalls, sheepskin coats for Europe, and gates and gardens for the school. His own work had been exhibited at the University of Melbourne in 1946 and in 1953.

In 1963 Hirschfeld-Mack published The Bauhaus: An Introductory Survey. Next year he visited Europe and was invited by the Bauhaus-Archiv in Darmstadt to reconstruct his colour-light apparatus and demonstrate his colour-light plays. He died in 1965.

This man, little known in Australia, introduced the modernist aesth­etic challenge into art education here. His famous Bauhaus project, Farbenlichtspiele/Colour light play 1922-23 was shown for the first time in Australia only last year (Powerhouse Museum Sydney, Aug 2008). And an art historian talked to ABC Radio National about the influence of the Bauhaus on Hirschfeld-Mack and his influence on Australia (10th Sept 2008). Alas I missed both programmes.

Great post. I'm curious to see some of the woodcuts he made during the war. I'm off to see if I can find some online...

Hi Helen! Terrific post. I wish I could help you out by pointing you towards more Hirschfeld-Mack images, but I haven't been able to find many. Here's a link to different photos of the same object though:

Ohhh and also, you may be interested in some interviews I've been doing with graphic designers, assessing the Bauhaus' influence on contemporary graphic design. One such interview can be found here:

Hi Helen have just been reading your blog with the information about Hirschfeld-Mack. Recently I met a former student of his from Geelong, who had some interesting stories, and I had intended writing an article about Mack for our society journal, the Spirit of Progress. Would you be agreeable to having your blog entry reproduced in the Journal, with additional material by me based on the stories I was told and some other sources. Naturally you would receive full attribution.

I'd be delighted to be included in Spirit of Progress Journal. Note that I was lamenting my lack of knowledge of Australia's only real Bauhauser. There were one or two others who were greatly influenced by the Bauhaus, but Ludwig Hirscheld Mack was our only bona fide graduate. Given that I am an Australian art historian myself, I would have hoped that my blog entry would have been a bit less skimpy. But the reality is that I know more about Charles Rennie Mackintosh, the Vienna Secession artists etc.

By the way, I love Deco. And I have some entries in Melbourne
and Australian Architecture Topics: A place to talk about Aus-
tralian Architecture, Heritage & Planning Issues. See "Hels" in http://www.walkingmelbourne.com/forum/viewtopic.php?p=14192#14192

Zoe said...
thankyou for your blog on
Bauhaus in Australia: Ludwig Hirschfeld-Mack.

i am currently studying at the national art school in sydney and i am writing an essay on the bauhaus and it was a lovely surprise upon surfing about the internet to realise that ludwig had taught at geelong, where i studied!

I saw the computer generated realizations of LH-M's "Farben Licht-Spiele" at a Tate Modern Exhibition in London earlier this year, and have just blogged about it here:

peter,
I couldn't leave a comment at the end of your post because comments were closed. But you have presented important stuff!

Firstly the use of mathematical concepts in Hirschfeld-Mack's work is worth getting my mind around.

Secondly you have a very nice list of references there.. readers will find that invaluable.

Sorry, Helen. I had comments turned off to deter spammers. My webpage should be OK now.

If you are interested in the influence of geometric ideas on Malevich and Mondrian and their contemporaries, I definitely recommend the paper by Dabrowski and the nice book by Henderson.