In An Edwardian State of Mind and Victorian/Edwardian Paintings, find all the facts about Annie Besant's early life. Now we need to examine her connection to Australia.

In 1889 Besant was converted to Theosophy i.e the supreme wis­dom religion that would supersede Christianity. Within a very short time, she was visiting Melbourne “for the purpose of lecturing on Theosophy. Mrs Besant's daughter is married to a Melbourne pressman .. and was a spokeswoman of an adult-suffrage deputation to the Vict­or­ian Premier”  (Bulletin, Sep 1894). Then Mrs Besant continued her lecturing tour in Sydney. 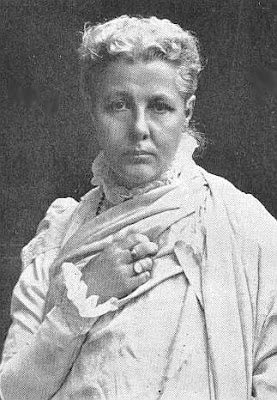 Annie Besant introduced a strong socialist element to Theos­ophy, because she was very well known in the Fabian Society. Her second important tour of Australia was in 1908.

In 1911 Besant was a keynote speaker at an important NUWSS suffragist rally in London. Soon after becoming a member of the Theosophical Society, Besant went to India for the first time. Thereafter she dev­oted her energy to the Theo­sophical Society, to India's freedom and to women’s prog­ress, in India and back at home. She started the Home Rule League in India for obtaining the freedom of the country and reviving the country's cul­t­ural heritage, attended the 1914 session of the Indian National Cong­ress and was elected its president in 1917. Despite being interned by the British authorities during WW1, Besant continued to write letters to British newspapers, arguing the case for women's suffrage.

The real surprise to me was not Besant’s energy and various pas­s­ions. Rather I want to know why intellectual, educated women artists in Australia would flock to Theosophy. Jane Price became a founding mem­b­er of the Melbourne Branch of the Theosophical Society, and spent long hours discussing theosophy and Besantian writings. May Vale in particular wanted to use Besant Hall as a venue for exhibitions. Wal­t­er Burley Griffin, the (male) American architect and city planner who designed Australia’s capital city, Canberra, was apparently another follower of Theosophy. Ethel Carrick Fox eventually joined the Theos­ophical Society in Sydney.

Artist’s Foot­steps concluded “The role of Theosophy in Australian art has yet to be fully examined. However, given the number of artists who took an interest in theosophy, esp­ec­ially in the early years of the C20th, it is likely that theosophy was a factor in the production of a number of their artworks”. Jill Roe in Beyond Belief: Theosophy in Australia suggested that Theosophy’s popularity was due to middle class Church of England women’s disappointment with their church’s lack of vision for women outside home, family and charity.

With its emphasis on the power of love, on service and on a duty to protect the weak, Theosophy prefigured many of the values of modern feminism. I would suggest that Annie Besant’s personal appeal to intellectual women was no less compelling. Certainly the Theosophical Society has become a major focus of interest by cultural historians.

I have chosen to write about Annie Besant for an essay, so I love this post. What happened to her eventually?

what a great woman to write about.

With age, Besant became less philosophical and more political. As editor of the New India newspaper at the beginning of WW1, she attacked the colonial government of India and called for clear and decisive moves towards self-rule. She even founded the Home Rule League for a more nationalist and vigorous India. In June 1917 Besant was arrested and gaoled.

The government announced it was moving Indian self-government, and Besant was freed within 3 months. In fact she soon took over as President of the Indian National Congress for a year.

This was not a lady to move into a genteel old age home. Besant continued to work for India, doing public speaking and writing to politicians in India and in Britain. She died in India in 1933 at a very decent age (86).