Were Some of Vermeer's Models Pregnant?

Were some of the Women in Vermeer’s Paintings Pregnant? by Nagore Barbero, 2/6/2008

Barbero wrote “Even though to the modern eye 3 or perhaps 4 women in Verm­eer’s works seem to be pregnant, there is good reason to believe that this was not the case. According to Marieke de Winkel, Dutch costume expert, pregnancy was not a common subject in art and there are very few depictions of maternity wear. Even in religious paint­ings such as the Visitation, where depictions of pregnant women is required, the bod­ies of the Virgin and Saint Elizabeth were usually completely hidden by draperies. De Winkel further argues that to his knowledge there are no examples of or pregnant women in Dutch por­t­raiture, an interesting fact considering that many women were paint­ed in their first year of marriage, a time when they could have been with child. Pregnancy was most likely not seen as aesthetically attractive.

Arthur Wheelock wrote that Dutch fashions in the mid-C17th seemed to have encourage a bulky silhouette. The impression of the short jacket worn over a thickly padded skirt creates in Verm­eer’s painting in particular may create just such an impression. It is interesting to note that in the 1696 Dissius auction in which 21 works by Vermeer were sold, the Woman Holding Balance was desc­ri­b­ed as A young lady weighing gold, in a box, by van der Meer of Del­ft, extraordinarily artful and vigorously painted. Since preg­nancy was not portrayed in Dutch painting of the C17th, it seems noteworthy that the catalogue’s author would not have noted such an exceptional fact. Afterwards, no mention of the woman’s pregnancy can be found until 1971 despite the fact that the work can be traced in an unbroken line to this century.

And modern scholars generally believe that Vermeer syst­em­atically drew upon fellow genre painters of the time such as Gerrit Terborch, Frans van Mieris, Gerard Dou for both his compositions and themes. He did not substantially subvert or even widen established iconographical boundaries but rather seemed completely absorbed in realizing their fullest expressive potential. In this light, it seems doubtful that Vermeer addressed such an uncon­vent­ional theme such as that of a pregnant women.”

I too was very interested in Nagore Barbero’s question but came to a different conclusion. There were three main reasons for thinking at least some of the women in Vermeer’s works were indeed pregnant.

A] Firstly Mrs Vermeer and her contemporaries were almost always pregnant or nursing. Mrs Vermeer herself had 11 pregnancies where the babies survived infancy and possibly several more pregnancies where the baby did not survive. Vermeer would certainly have been used to the sight of pregnant women and he may have even liked the contemp­lative, peaceful glow of pregnancy. I am showing Woman Holding a Balance specifically because the woman may have been weighing hers and her baby's life in the balance. 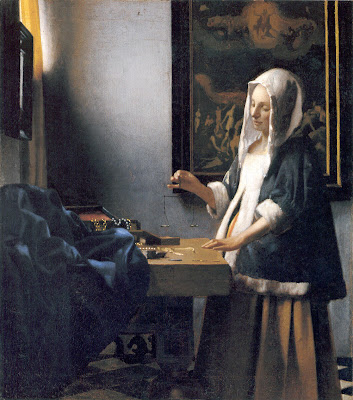 B] Vermeer was a slow, extremely careful painter who completed relatively few (c34) paintings in his entire life. Money was a constant problem, so it seems unlikely that the artist would have wasted money paying a professional model. More than likely, Vermeer used his wife, family members, visitors and staff in the home as his models, whether they were pregnant or not.

C] Calvinist Dutch families valued cleanliness, godliness, thrift, educating their children well, teaching their staff well and keeping a well-run home. Having specialist maternity clothes for the last 20 weeks of pregnancy would have seemed extremely wasteful to these good burghers. So we might assume that pregnant women would simply wear their loosest, most comfortable ordinary dresses, above the fundus if necessary. Kees Kaldenbach was even more specific, noting that in French fashion, women would sometimes wear a robe battante, a naturally wide garment which would incid­ent­ally cover up any sign of pregnancy. However depicting pregnancy intentionally would have been totally unacceptable.

Specialist information is required here, so I recommend that interested people read the "Fashion and Its Histories" sessions of the Art Association of Australia and New Zealand Conference, Brisbane, Dec 2008.
Posted by Hels at 10.12.08

Because of the open character of the scenes, Vermeer paintings invites people to read their own stories and concerns into the works of art, he gets our private movies going. 20th C and 21 C persons find images of pregnancy colpletely OK to photohraph and paint.

One MUST however take the strong taboo into consideration regarding the depiction of pregnancy in 17th c art. Of the about 1 million painted images surviving (oil paintings) and the many millions of prints and drawings NONE depict pregnancy. At least I have not come across one in my professional life. Thus it must have been a strong cultural taboo.

Therefore my position is that Vermeer depicts women who are just looslely dressed, not pregnant.

I am very interested in Dutch history and therefore in the Dutch Golden Age of the 17th century, so I enjoyed reading this provocative piece as well as your recent article on Tulipomania. I wonder have you read Timothy Brook's book "Vermeer's Hat: The Seventeenth Century and the Dawn of the Global World" (Profile Books, 2009). He takes a number of paintings, mainly from Vermeer, and analyses the materials or commodities that appear within each painting and then tries to trace the global trade patterns, including issues like slavery etc, that permitted these materials to end up in Vermeer's studio. It is well written and if you haven't already read it I'm sure you would enjoy it.

Alberti's Window is a very interesting blog that is debating a closely related question:

I love making links in these posts :)