A beachy town in Russia - Berdyansk 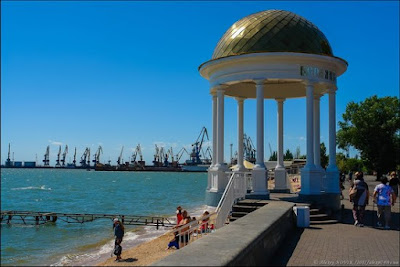 The coast, beach and port

My grandfather and his many siblings, nieces and nephews lived in two adjoining Russian cities on the Sea of Azov, Berdyansk and Mariupol. I had published all the family photos and letters from Mariupol, so now I need to thank the Ukrainian Tourist Bureau for its material on Berdyansk.

The Russian Imperial government began to plan a sea port on the Northern Azov in 1824 when the Governor General of the Cauc­asus Viceroyalty sent an expedition to the Azov Sea. Its task was to find a place to build a new seaport to assist in the defence of Russia's southern borders. Soon merchants moved in and built priv­ate wooden quays. In 1836 the first foreign ships entered the port of Berdyansk so a modern stone lighthouse was soon built by Italian merchants. By 1883, the oil lamps were replaced by elec­t­ric lights.

In 1841 the settlement at Berdyansk Bay received the city stat­us and under the first mayor, the small township turned into a growing city with many foreign companies' offices and active international trade. He had built the first stone houses in the town and the famous Winter Theatre, which was destroyed in WW2. Some foreign grain purchasing representatives moved their offices to Berdyansk, from Mariupol and Odessa. 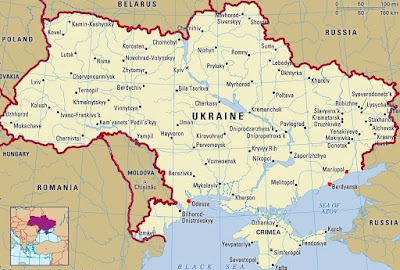 In Berdyansk the main employer was still the seaport, and in 1869 the breakwater was ordered. This stone building is 640 metres long with two port lights on the ends – pointers to the harbour, located 859 metres from the shore. The increasing importance of the port was becoming clear.

In 1876 the Town Governor and Port Chief did much to promote the development of both port and city. Soon there were small industrial enterprises and banks opening in the city. Italians constructed the city power station, and 2 daily newspapers, 3 libraries and 4 book­shops were established. Electric lighting covered the city. 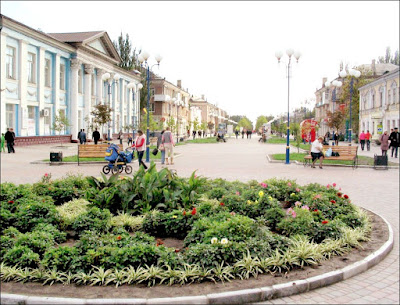 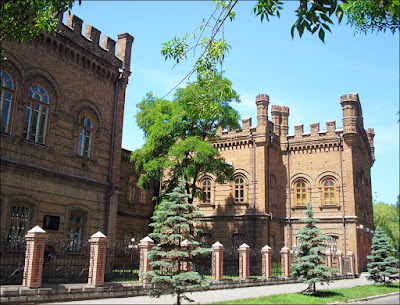 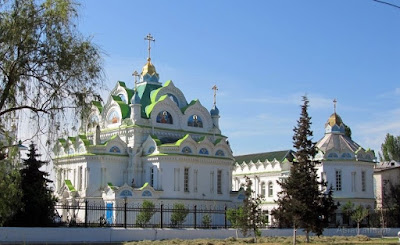 In 1899 Berdyansk was linked to the railway and new residents flooded in. There were 10 churches, 3 Jewish synagogues, boys & girls' high schools, nautical classes and a college. In addition to an extensive export trade in mainly grain & flour, Berdyansk became a substantial distributive market for goods received over a wide area.

In the new century, the sea port had clients from across the world - metal processing, scrap metal, grain, coal, ore, clay, sunflower-seed oil, industrial oils, iron, fert­il­isers and mineral oil. The container terminal was quickly linked to the railway depot.

Berdyansk was also an important fisheries centre which was an int­eg­ral part of the city's food industry. There is also a scientific organisation which does fish research in reservoirs of the Azov basin. The city is located on the smoothly rising coast, so there are many of inter­est­ing places to visit eg the Berdyansk spit, which cuts into the Azov Sea for 20 km. In many sanatoriums, rec­reation centres and spa salons in the city, there are mud bath treatments from the lakes and estuaries. It makes sense that the sights of Berdyansk are mostly connect­ed with the sea eg boat trips to the islands, visits to the light houses, the zoo and dol­ph­inarium, fine sandy beaches and a fresh, very warm sea.

My grandfather and his brothers knew Berdyansk’s two most famous citizens. Isaac Brodsky (1883-1939) was born in a village near Berdyansk. He studied at Odessa Art Academy and the Imperial Acad­emy of Arts in St Petersburg. In 1916, he joined the Jewish Soc­iety for the Encouragement of the Arts. Brodsky was on good terms with many leading Russian painters, including his mentor, Ilya Rep­in. He was an avid art collector who donated numerous first-class paintings to museums in Russia and elsewhere.

In 1934 Brodsky became Director of the All-Russian Academy of Arts. After his death, his Arts Square flat in St Petersburg was de­c­lared a national museum. And the Brodsky Museum in Berdyansk has 4,500 works of painting, sculpture, graphics and applied art.

Joel Engel (1868—1927) was also born in Berdyansk. He studied law at the Khar­kov National University, and later, with Tchaikovsky’s encouragement, he entered Moscow Conservatory to pursue his passion for composing. After graduation, Engel worked as the music critic of an influential Russian newspaper and supported composers who wrote in the increasingly popular Russian nationalist style.

Engel had no interest in Jewish music until an eventful meeting in 1899 with Vladimir Stasov, art critic and leading proponent of Rus­sian nationalism in art and music. When asked about his pride in his own people, Engel apparently experienced an revelation, and took a deep interest in his Jewish musical roots. In 1900, Engel returned home to Berdyansk, and collected Yiddish folk melod­ies. Then he organised lecture-concerts which included performances of the songs he had recorded and arranged. 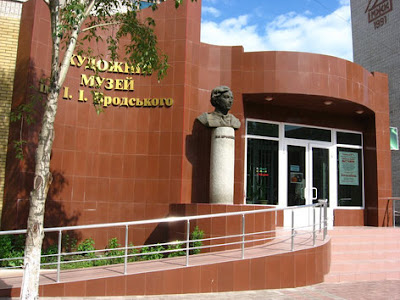 In 1922, the Society sent Engel on a mission to Germany, to promote the new Jewish music movement. Engel organised concerts in Berlin and Leipzig, performing songs and instrum­ental works by himself and by other Russians. Engel opened Yuval Publishing House in Berlin in 1923, becoming the main pub­lish­­er for the Society’s composers.

Ukraine officially declared itself an independent country in 1991, including Berdyansk (pop 120,000).

It looks like a nice city with a good mix of architecture. Twice you mentioned Italian expertise being called upon. Interesting.

you usually publish only two posts a week.... so did you not want the Apollo post to gone on for another few days? I wasn't expecting another post quite so quickly.

Anyhow your history of Berdyansk finished in 1923. Was there war damage done either in the 1940s or after Ukraine declared independence in 1991?

Hello Hels, So much history only covers the most famous places, but your post shows how cities like Berdyansk, relatively unknown in the west, had their commercial and cultural importance. Often it is the smaller places whose influences culminate in major centers such as London, New York or Odessa. I particularly think that the Berdyansk university is in a handsome Gothic building.
--Jim

Hi Hels - interesting to learn more about Ukraine ... thanks for posting. It must have been interesting to find out some of the back stories around the time of your families lives there. All the best - Hilary

I had to find Berdyansk on Google maps! I had never heard of it or the Sea of Azov. It looks stunningly beautiful and is nearly on a latitude with south of France. Now I want to go there. Have you been? Is there still a Jewish population?
CLICK HERE for Bazza’s earth-shateringly educational Blog ‘To Discover Ice’

The port developed rapidly in the mid C19th and turned into a trade and industry hub. So when Berdyansk was reaching the peak of its prosperity in the late C19th, they recruited workers and designers from around Europe. Today the architecture that is most appealing is 1) the boardwalk along the Azov Sea shore and 2) the stunning pedestrian area of Azov Avenue.

No matter what I do in designing each post, I have no idea whether or not the top photo will appear in the post summaries, along side everyone's blog. It is outside my control, apparently gggrrr Thus I deleted the Apollo Prize post after a few hours, and moved onto the next post.

When Russia controlled the Eastern Donbass region, Ukraine lost a significant net share of its industry. What has the Ukrainian economy lost from taking its easternmost region when container ships were restricted from entering the ports of Mariupol and Berdyansk? Billions!

It is so interesting, even for families who knew Eastern Europe very well. I would have said that Odessa, Krakow, Vienna, St Petersburg, Prague, Minsk etc were the most impressive cities when it came to music, architecture, ballet, art, languages, science, literature etc. I think of Berdyansk more for its pleasant climate (relative to the rest of Russia) and tourist resorts of national importance.

when my family lived in Mariupol and Berdyansk until the middle 1920s, there were plenty of Jewish day schools and synagogues in both cities. Most of the two communities survived very well ...until October 1941-1942 when most Jews were annihilated.

In Berdyansk it was only in the 1990s that a Jewish cultural society was re-founded and a synagogue congregation was re-activated.

my maternal family were very patriotic Russians, ever since the 1905 and the 1917 Revolutions. They spoke Yiddish at home and Russian at school and work, never Ukrainian. So I think it was difficult for my mother going back to the family home, and found it was now in a different country. Thank goodness I was born in Australia :)

I have heard about Russia all my life from my mother and grandparents, but I never thought of their lives as beachy, relaxed and filled with pleasure.

this was a part of the world that emerged only in the mid 19th century, so the architecture was carefully planned and well constructed. In this ideal location, on the Sea of Azov, nothing was accidental.