Famous inventors and scientists whose surnames went into our language 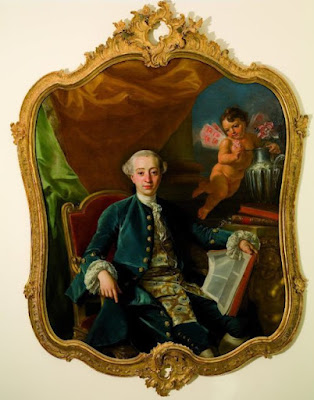 Casanova, attributed to Francesco Narichi
1760
Many words have been incorporated into our normal vocabulary, to connote the qualities that their namesakes were noted for. In fact there are many names of historical figures and fictional characters that have become part of common parlance. Ruth Beloff went back to see who the men and women were, whose names have been immortalised, in English at least.
Romeo was the ardent young lover in Shakespeare’s (1590s) timeless tragedy Romeo and Juliet. Venetian Giacomo Girolamo Casanova was a real-life womaniser who lived and loved in 1725-98, while Don Juan was a fictional phil­and­erer first written about in a 1630 play by Spanish author Tirso de Mol­ino, The Trickster of Seville.
A Mata Hari is either a beautiful seductive female spy, or a dup­lic­it­ous woman, derived from Dutch-born Margaretha Geertruida Zelle. She was an exotic dancer-courtesan in Paris who used her stage name, then served as a spy for both French and German intel­l­igence during WW1. In 1917, aged 41, she was exec­ut­ed by firing squad in France for being a German spy.

A Florence Nightingale is someone who will come to a sick person’s aid, any time in 24 hours. The actual woman was a British nurse (1820-1910) who became famous for her pioneering nursing work during the Crimean War where she tended to wounded soldiers. This Lady with the Lamp continued to make her rounds at night.

A Mother Theresa is a good person who embodies all that is caring. Born Agnes Gonxha Bojaxhiu in Albania (1910-97), this Catholic nun spent her life to the sick and impoverished in India etc. She founded the Mission­aries of Charity congregation in 1950, with hundreds of missions to help people around the globe.

There are words based on peoples’ names that became nouns or verbs. Boycott is the act of refusing to use a product or service, as a form of protest. The term came from Ir­ishman Char­l­es Boy­cott (1832-97), an agent who refused to give in to land reforms back then.

Many exercise in a fitness regime to improve their shape, and may wear a leotard. This skinny one-piece garment that cov­ers the torso was created and worn by French acrobatic performer Ju­les Leotard.

Or ride on a fairground Ferris Wheel. This owes its origin to Am­er­ican engineer George W Ferris who designed the first one for the World’s Columbian Exposition, Chicago 1893; it celebrated the 400th anniversary of Christopher Columbus’ arrival in the New world.

The temperature gauge was devised by two men. The 3 countries in the world that still officially use the imperial system: US, Lib­eria and Myanmar, use Farenheit, named for Danzig physicist and ins­tr­ument maker Daniel Gabriel Farenheit (1686-1736). Anders Celsius (1701-44) was a Swedish astronomer and physicist who, in 1742, de­signed an inverted form of the centigrade temperate scale. 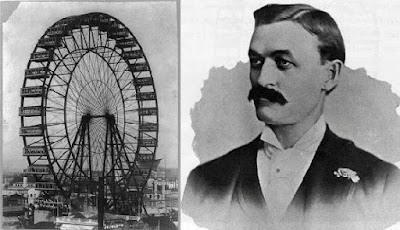 George Ferris Jr. invented the Ferris Wheel 1893
at the bequest of the Directors, Daniel H. Burnham, for the upcoming Chicago fair.
In a 1902 political cartoon in the Washington Post, US President Teddy Roosevelt on a hunting trip was depicted showing compassion to­­wards a captured bear. Inspired by this cartoon, an immigrant in New York created a little stuffed bear cub and placed it in his shop window with the sign Teddy’s Bear. It was very successful.

The Rubik’s cube was invented in 1974 by Hungarian Prof of Archit­ec­ture, Erno Rubik. He worked at the Dept of Interior Design at Budap­est’s Academy of Applied Arts, trying to solve the struc­t­­ural prob­lem of moving the parts independently, without the entire mechanism collapsing. (The puzzle appeared later).

Now some surnames used as words in the Oxford English Dictionary. The phrase Hobson’s choice was first noted in 1660, referring to Tobias Hobson (1545-1637), a puritan mayor of Cambridge and horse-hirer. He earned a national reputation by offering cust­omers either the horse nearest the stable door ..or nothing.

Bowdlerise is to expurgate words or passages considered in­del­icate or indecent and refers to the moral Dr Thomas Bowdler. In 1818 he publ­ish­ed an expurgated edition of Shakespeare’s plays. Bloomers, orig­inally a combination of skirt & trousers, was named for an American woman, Amelia Jenks Bloomer (1818-94), who started a revolution in wom­en’s cl­othing when she wore them. It’s common for the views and st­yles of writ­ers and politicians to be used, in adject­ives & nouns eg Machiavellian (1566), Dickensian (1881) and Thatch­erite (1976) and words from fictional surnames eg Dickens’ Scrooge (1940).

Science and invention were great sources of new words, or products. Newtonian, describing the theories of Sir Isaac Newton (1642-1727) was recorded by 1676. Volt and Ampere were named after two physic­ists, Italian Alessandro Volta (1745-1827) and French André-Marie Ampère (1775-1836). The original design of the hansom cab was patented by Joseph Hansom in 1834. In Mackintosh the pro­duct name has become gen­eralised to denote a rainproof coat, whether made of the rubberised cloth patented by Charles Macint­osh in 1823 or not. Pasteurisation (1890) is the method of ster­il­is­ing liquids invented by the French chemist, Louis Pasteur (1822-95). Hoover has long been used in British countries to refer to any make of vacuum cleaner, not exclusively the machine patented by William H Hoover in 1927. Tommy-gun (1929), origin­ally a nickname for the John Thompson sub-machine-gun, is now used for any make of the weapon. NB brand names are normally excluded from the OED if they do not have generic uses. 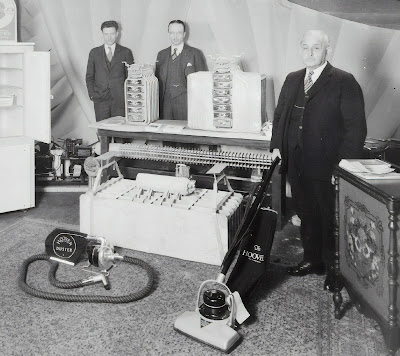 I don't understand why the French government held Mata Hari responsible for the deaths of Allied soldiers and it was insane that the French executed her as a German spy in the war. But my point here is that names have been immortalised, as Ruth Beloff showed, but the immortality in this case was ambivalent, at the very best.

My feeling is that Beloff was particularly impressed with surnames coming into the language as verbs, nouns and role models. Many of the people were recognised for their creativity, inventions etc, while others were remembered for their less admirable qualities.

Reputations change with time, and between community groups, so Napoleon might be greatly admired in one generation and despised in another. But there wouldn't be a person on the planet who didn't recognise Napoleon's name.

I love this sort of stuff, Hels. I didn't know about Boycott (and it's gone straight into the Vault) but just looking at the word in print now, it does look so obviously a surname I'm surprised I hadn't previously surmised. Tommy-gun is another new one - I see it in books based during the War (viz little boys playing soldiers with their wooden Tommy-guns) and presumed it to be a kids' term for mock-gun!

Brand names that go into English as generic nouns for all products of that type seem to last a shorter time. I asked a young shopkeeper for Jex (Australian wire cleaning pads) and she had never heard of them.

quite true! Many surnames quietly slipped into the language 100 years ago or more, and stayed there. I knew that ladies' undies were often called bloomers, but I had never heard of a woman called Amelia Jenks Bloomer.

since writing this post, I have looked up many well known words in English to see what had originally been surnames. A piece of clothing that I always wear, a cardigan, came from the British general 7th Earl of Cardigan; he led the charge of the Light Brigade in the Crimean War. Who knew?

brand names DO become generic nouns for all products of those types, but they are a bit more specific to an era or a country. Our grandparents and parents used the name Jex (or Brillo in the US) for all steel wool cleaning products.. but our children may not know the name at all. Ditto Biros, Glad Wrap, Kleenex, Band-Aids, Pyrex etc, at least in British countries.

The word "stent" derives from the name of an English dentist, who invented an impression compound in 1856. Read the story of Dr Charles Stent.

You noted that Charles Thomas Stent was the 19th century English dentist remembered for his advances in denture-making. But without the stent named after him, later cardiologists' surnames might have gone into English instead of the word stent.

Very interesting Hels. I enjoyed it. Boycott was also news to me.

Fascinating. I only knew of Pasteur and Rubik. I assumed Mati Hari was Indian. I kind of knew about Casanova and Don Juan.

I always advise people to do some research on the 'saintly' Mother Theresa. She was not terribly saintly at all.

Hi Hels - fascinating ... I knew many of them - whether true to their names or not - but it's amazing how our language evolves ... particularly the English language. Sandwich is one I can think of ... cheers Hilary

It only goes to show that we can still learn new material after the age of 60...
and that blogging is often a very useful space for real learning :)

One surname I knew nothing of was Dr Franz Anton Mesmer, an 18th century German physician. Mesmer wrote his theory of animal mesmerising and hypnosis.

Mother Theresa was firstly loved by the Catholic church and later loathed by the feminist movement. That only confirms to me that reputations change all the time, depending largely on country and era but also on politics etc.

Churchillian usually means determined, strong and a powerful speaker. But a minority of the population believed he was a racist and a fall-down drunk.

Great example! In 1762, John Montagu, 4th Earl of Sandwich, invented the meal that changed our lunchtime. He couldn't leave the task at hand, so he asked for a serving of roast beef to be placed between two slices of bread, eaten without cutlery. His surname has remained constant in English for 260 years.

This is such an interesting topic! Did you know that Balaclava has a similar Crimean War origin to Cardigan. It's a town in the Ukraine.
Hoover is a trade name that has become generic for Vacuum Cleaner and Biro (named after its inventor) for a ball-point pen. The list is endless...

Hi Bazza: noteworthy is Baron Marcel Bic's pen has become known as a biro since
Hungarian László Bíró patented his ballpoint fountain pen in 1938.
Hi Hels, I salute your great work. Hoovering is funny and Aussies missed an opportunity to refer to lawnmowing as Victaring.

I lived for years in Redan St, near the corner of Balaclava Rd and Crimea St, and knew lots about the Crimean War. But I had forgotten that a balaclava is winter headgear and I had no idea about the 7th Earl of Cardigan. Back to front for most people :)

Do you think Joseph-Ignace Guillotin fits our topic?
I wonder if Sir Joseph Lister, founder of antiseptic medicine, is proud that all mouthwashes are referred to as listerine these days.

that reminds me of kerosene. It became a specific brand name trademarked in Canada in 1854 before changing into a generic label over the years. The term kerosene is still widely used in Canada, India, New Zealand and the United States, and is very common (as kero) in Australia :)

it is a fascinating topic, isn't it? And is probably the same in all languages since many surnames were famous, whether they came from Italy, France, Germany, Russia or any other nation. For example I am sure pavlovian is a familiar adjective for us all, named for Dr Ivan Pavlov, brilliant Russian physiologist.

In my blog, articles related to are mainly written, and they are usually.
ភ្នាល់បាល់