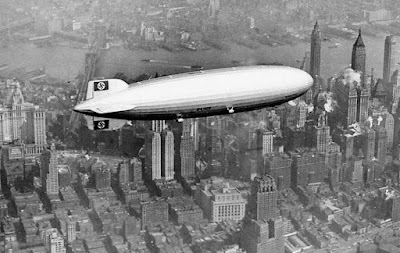 Hindenburg over New York
complete with swastikas, 1937
The first airship was designed by German army officer Ferdin­and Graf von Zeppelin and made its initial flight from a floating hang­ar on Lake Constance in July 1900. This zeppelin was a rigid air­ship that was cigar-shaped, trussed and a cov­ered frame sup­ported by internal gas cells. Underneath a keel-like structure conn­ected 2 external cars, each of which had a 16-horsepower engine geared to two propellers. A sl­iding weight on the keel gave vertical control by raising or lower­ing the nose, while rudders were provided for horizontal control. 32 km/hour was top speed.

In WWI Germany had some success in long-range bombing operat­ions with the zeppelin, which reached higher altitudes than other pl­an­es. In 1917 German zeppelins made flights of 100 hours, leading many to bel­ieve that large air­ships could drive aviation progress, especially as some zeppelins went to the Allies in German post-war reparations.

The Hindenburg, powered by four diesel engines, had a maximum speed of 135 km/hour. A convent­ional zepp­el­in design, Hindenburg was laun­ched from Friedrichshafen in March 1936, inaug­ur­ating commerc­ial air serv­ice across the North Atl­antic. It carried 1,002 passengers on 10 sch­ed­uled trips between Germany and U.S. NB Though it was design­ed to be filled with helium gas, the ship was filled with highly flam­m­ab­le hyd­rogen because of ex­port restrict­ions by the U.S against Nazi Ger­m­any. 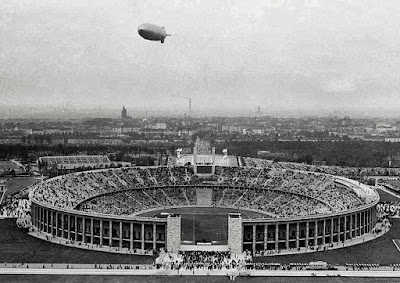 The Hindenburg was the star of the Olympic Games
Berlin Stadium, Aug 1936
Hindenburg was the fastest and most luxurious plane to cross the Atl­ant­ic. Passengers travelled in deluxe lounge rooms; enjoyed meals in el­eg­ant dining rooms; heard piano in a modern lounge and slept  in 25 private twin-cabins. The cocktail bar was an attractive space and the promenades on two decks were spacious. Walls were lined with silk painted, with scenes depicting great historic voyages. 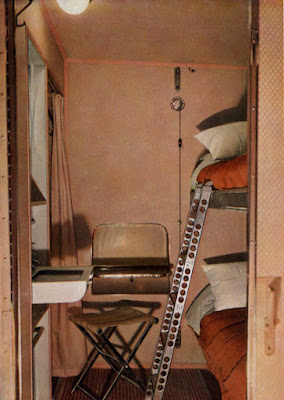 Sleeping cabin on board the Hindenburg
1937 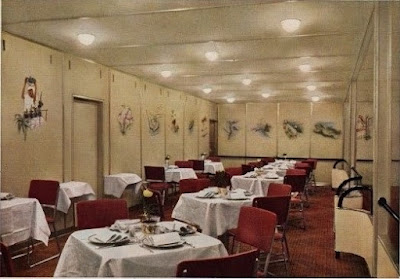 Dining room, on board the Hindenburg,
1937
Hindenburg began its last flight on 3rd May 1937, carrying 36 pass­en­gers and 61 crew. The ship left the Frankfurt airfield on its 63rd flight and flew over Cologne, and then followed the English Channel past the chalky cliffs, and headed out over the Atlant­ic shortly. Hindenburg followed a northern track across the ocean, passing south­ern Greenland and crossing the North American coast at New­foundland. Head winds delayed the airship’s passage across the Atl­antic, and the Lakehurst arrival was postponed. By noon on May 6th the ship had reached Boston, and by 3:00 PM Hindenburg was over Manhattan.
Flying south from New York, they arrived at the Naval Air Stat­ion at Lakehurst New Jersey, but the poor weather conditions at the field concerned both the Hindenburg’s Capt Pruss and Lakehurst’s commanding Officer Rosendahl who delayed the land­ing until the storm ended. But then there was a rush. Rosendahl asked for the earliest possible land­ing because the airship had to be back in Europe in time for King George VI’s coronation (12th May 1937).
As Hindenburg approached the field at Lakehurst in wild wind at an altitude of c600’, all their normal measures could not keep the ship in level trim, so 6 crewmen were ordered to add their weight to the bow. While landing at Lakehurst, witnesses saw the first visible external flames appear.

It instantly ended because of 7 million cubic feet of hydrogen gas. Decades of research and sc­ientific tests support the conc­l­usion reach­ed by the German and American accident investig­at­ions in 1937: the Hindenburg disaster was caused by an electrostatic discharge that ignited leak­ing hydrogen. The spark was ?caused by a dif­ference in electric potential between the airship and the sur­r­­ound­ing air: The differ­ence in elect­ric potential like­ly caused a spark to jump from the ship’s fab­ric over the ship’s framework. No evidence of sab­otage was ever found. 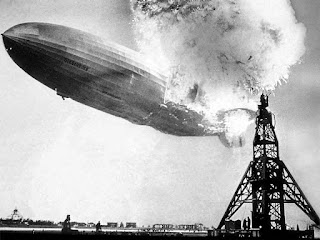 The Hindenburg alight,
Lakehurst Naval Air Station NJ, 1937.
On the passenger deck promenades, where some passengers and crew had gathered before the landing, the rapidly in­creasing angle of the ship caused people to tumble up walls. The fire spread so quickly that survival depended where the people were located. Passengers and crew began jump­ing out the promen­ade win­dows to escape the burning ship, and most of them who were close to the promen­ade windows, surv­iv­ed. Those who were in the passenger cabins at the centre of the decks, died. Crew who were close to an exit generally surv­ived.

As the ship fell to the ground, so soon after the first flames, those who had jumped from the burning craft scrambled for safety, as did members of the ground crew below the ship. Mirac­ul­ously 62 of the 97 passengers and crew survived.
The glamorous, speedy airships had been warmly welcomed home despite a long list of earlier accidents. But this time the Hindenburg crash was captured on film. Mil­lions of international viewers saw the dramatic inferno. The 1937 disaster ended the use of airships in commercial air transport. But in any case, the remaining Zeppelins were des­t­r­oy­ed by Allied bombing dur­ing WW2, and the building of Zeppelins was never resumed.

Thanks to the documentary Hindenburg: Ten Mistakes
Photo credits: airships.net

Great luxury, poor safety in 1937. I am not a conspiracy theorist, but it sounded like sabotage to me.

It is important to read contemporary reporting of the crash in New Jersey. Even if there were mistakes made back then by newspapers and officials, history had not yet been rewritten according to changing views that developed during and after WW2.

The Hindenburg Disaster – As Told By Our Newspapers
April 14, 2022

Hi Hels - interesting seeing the inside of an airship ... yet thankfully total tragedy was averted. All the best - Hilary

agreed... just 2 years before WW2 started.. sabotage theories were inevitable. People believed that a Hindenburg catastrophe would harm Hitler's Nazi regime. The third Captain in command of the Hindenburg knew that Captains Max Pruss, Ernst Lehmann and he had been warned of a possible incident. He was told by the FBI agents not to speak of the warning to anyone. Capt Max Pruss agreed; he'd flown the Hindenburg 12+ times and was extremely familiar with the ship; this was a flawless flight, he said. Finally because the Hindenburg was seen as a symbol of Nazi strength and superior German engineering, Crewman Spehl’s motive in sabotaging the ship was to shame Adolph Hitler and the Nazi party that Spehl hated.

It sounds unlikely to me, but then who was alive to give correct evidence to either the American or German commission of enquiry.

many thanks. I thought the survivors’ stories added a human element to the story, as opposed to the engineers and structural experts. And even the British newspapers added their country’s own experience of the Hindenburg, the Gloucester Citizen noting how the airship had passed over the previous summer.

I would have created a link to your blog, but it wouldn't accept my Comment.

I always recognised the shape, colour and size of the Hindenburg, but before this year I had NEVER seen the inside facilities. The BBC said Hindenburg boasted enticing public rooms, 25 private twin-cabins, ship-shape crew’s quarters, restaurant, luxury lounge, cocktail bar and airy promenades on two decks inside the hull. Walls were lined with silk painted with scenes depicting great historic voyages.

It must have thrilled the travellers.

I thought I knew all about the Zeppelin disaster but I did not. Thanks for filling in detail.

Other airships crashed, before the Hindenburg. In 1923 the German Navy's airship Dixmude exploded in mid-air near Italy, killing everyone. The British R 101 was going to Karachi, crashed in northern France, killing almost everybody on board. The American military airship the USS Akron crashed in a storm off the New Jersey coast in 1933, killing everyone. I wouldn't have gone on an airship.

any big event in past history goes into our brains in Form 2 and stays there for the rest of our lives, unquestioned. So we need to keep our adult minds open to new information, and to be cautious about recent theories that aren't based on quality documentation. I think the Zeppelin Disaster would be one of those events where it was very difficult to get proper reports back in 1937 and 1938, but slowly slowly information will emerge.

I wonder if people knew about these earlier crashes. I am sure the military in Germany, Britain and USA didn't reveal the information to daily newspapers. And I am sure there were no photographers and film makers on the spot to capture the civilian crashes. By 1937, on the other hand, there was no hiding the Zeppelin Smash.

agreed... many people were not familiar with the story, because it seems there were too many vested interests who were afraid of what would happen to them - designers, engineers, pilots, plane crews, ground crews, weather broadcasters, government and military authorities etc etc. Not that airships will be built again.

Well give me that on a long haul flight any day !!! Apart from the blowing up bit . I wonder if there is any hope for Zepplin like aircraft because they certainly would have a low carbon footprint .Helium is inert but also a finite resource . In fact there is concern that using it on balloon is a dreadful waste of a finite resource which is used in many industrial and medical processes .

I hope you can get access to a documentary special HINDENBURG: TEN MISTAKES that premiered on SBS. It is excellent.

right! People are always going to travel, even though passenger air travel is producing the highest and fastest growth of individual emissions. I have no doubt airline companies are improving their machinery and their operations as best they can, but true alternatives will have to be found in the future.

Even if the Zeppelin is never resurrected, it showed that early designers created alternatives that we could well learn from now. Imagine that... our grandparents' generation being clever in the sciences!