Who invented and adapted bourekas?

For centuries, börek had been the food of nomads. Cooked over camp­fires, it had been carried in kits from Modena to the Maghreb or Barcelona. Though it got onto royal tables, it was a culinary witness to centuries of mig­rat­ion, conquest & displacement. Thank you Alexander Lee. 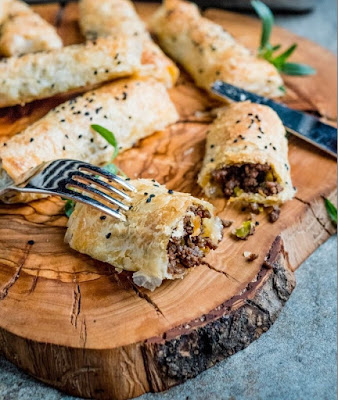 Few written documents survive from before the mid C12th but there are plenty of theories, especially that börek derived from the Byz­antine plak­ous/flat cake i.e two sheets of pastry, stuffed with honey, cheese and chopped nuts. Others suggest that börek was probably invented by the nomadic Turks of Central Asia, reflecting the herdsmen's harsh life. Cooked on a flat-iron griddle, it needed only those lim­ited foodstuffs which were avail­able on the steppe: the butter and cheese they made from their own sheep and goats; wild pars­ley; and the grains bartered in markets.
Though Turkic peoples have always been very proud of their itiner­ant culture, they envied the comforts of the city, especial­ly the thick oven-baked bread they encountered at market-time. With­out ov­ens, they emulated its fluffy texture by layering their dough over and over, before stuffing it with a savoury filling and frying it.Various Turkic peoples began migrating westwards across Central Asia. The Seljuks introduced it to Pers­ia and to East­ern Anatolia, formerly occupied by the Byzantine Empire. No longer confined to the steppe, fillings were adapted to the new consumers' tastes and to the availability of produce. When the Turkic migrations were brought to a halt, the nomadic Mongols overrun Per­sia and pushed towards Anatolia. Most of the peninsula was overrun.

Fortunately the Mongols were adept at assimilating the culture of those they subjugated, including food. Taking börek and Turkic pas­try cooks back to Cen­tral Asia, they also adapted it. The savoury past­ries were made from delicate filo dough and filled with feta cheese, parsley, chicken and a few vegetables.

Within a few decades, börek had become a staple of court cuisine in Mongol-ruled China. The Dietary Principles, written c1300 by the court dietician, was an attempt to apply Chinese and Islamic cul­in­ary theory to the Mongols’ favourite foods and included at least three different recipes for Chinese, not Turkic börek.

But börek had not been forgotten in its old homeland. Permitted to live according to their own customs, Turkics cont­in­ued to enjoy it throughout the Mongol occupation. When the last re­l­ics of the western khanates eventually disintegrated in the mid C14th, it retained great popularity, especially in Persia and the Cauc­asus. At the Timurid court in Samarkand it succeeded well.

As Mongol authority crumbled, the peninsula had fallen to many dif­f­erent Turkic groups. By the late 1350s, the Otto­mans were pred­om­in­ating. They pushed into East­ern Thrace and on to the Bal­kans, cap­t­uring Adrian­ople in 1362 and forcing the Serbs into submission in 1386. Under Murad II they controlled Eastern Anatolia and North­ern Greece and in 1453 con­qu­ered the prize, Constantinople!

To consolidate their diverse realms, the Ot­to­man sultans copied the Mongols: eagerly adopting and modifying the cultures of those they had conquered. The acquisition of new lands and the expansion of the imperial bureaucracy also disseminated the Ottomans’ own cus­­toms. In early C16th Istanbul, there were 4 börek shops per bakery.

The richness of Greek cuisine reflected the influence of the long Otto­man occupation (C15th on), borrowing the tastes and styles of the Middle-East and Mediterranean regions. Greek Spanakopita was usually pres­ent­ed in the triangular shape: filo dough, spinach and Greek feta cheese. 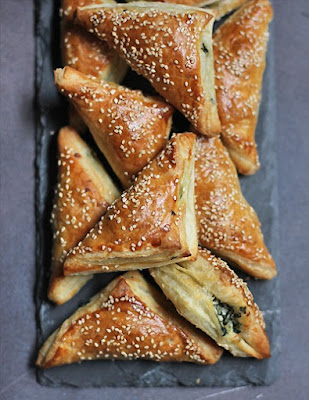 In the Ottoman reign of Sultan Mehmet IV (r1648-87), the Imperial Council met in a domed chamber of the Topkapi Palace. When the Grand Vizier and his minis­ters finished affairs of state, they had a lus­c­ious lunch. There were 6 sumptuous courses, the centrepiece of the meal being börek. Delicate and tasty, it was loved as the culinary epitome of Ottoman culture and courtly elegance. Despite the centralis­ation which occurred after the collapse of the Ottoman Empire after WW1, each region of Turkey has retained its own sense of cultural identity.

**
Alexander Lee reported Jewish boureka history after the expul­s­ion from Spain in 1492, but presented it as a side trip in the complex his­tory of bourekas. Now here is the real history, accord­ing to my grand­mother. Grandma's view was that far from being an Islamic Turkic, Mongol or Ottoman invention, bourekas was a Sephardi Spanish patent.

The Jewish people were expelled from Spain by the Catholic royals Ferdinand and Isabella in 1492. Some of those who fled took refuge in It­aly, others in Egypt, Israel or Syria. Many had heard of the rel­igious tolerance of the Ottoman Empire, and travelled to Anat­ol­ia for better lives. But they had not forgotten the long years of Sp­anish Jewry, bringing their customs and traditions with them. 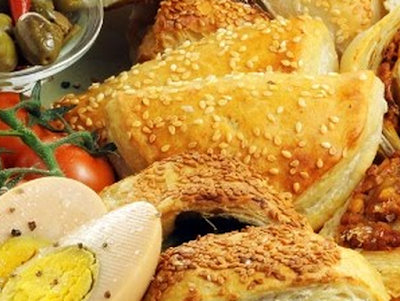 At first, the Spanish-speaking Jews ignored Ottoman börek, prefer­r­ing to stick to the heavy, crescent-shaped empanadas (pastry dough cheese turn­overs) they’d loved at home. But soon, by combin­ing em­panadas with börek, they created a hybrid dish, bourek­as. Made with thick dough and shaped like a half-moon, several fill­ings were used. And to en­sure that kosher dietary laws were maintained, dis­t­in­ctive toppings distinguished between cheese and meat pastries.

Things only changed in 18th & C19th when the Ottomans’ famed tolerance failed in a rising tide of anti-Semitism; many Sephardi Jews (originally from Spain, North Africa, Ottoman Empire and Middle East) fled. Recognising the strong comm­ercial ties with Venice, many Jews settled in Ferrara and Modena where there were already large Jewish populations, tak­ing bourek­as with them.

In the pre-State decades, Sephardi Jews emig­rated in large numbers. After the foundation of the State of Israel in 1948, a massive in­flux of Jews from all over the world created a melting pot of int­ernational cultures. My grandmother lived in Jaf­fa where Sephardi bourekas, crammed with fish or cheese, represented edible per­fection.

'Whoever invented/adapted bourekas did a good thing. We all love it here, in Israel.
The most popular are those filled with either cheese or mash potatoes. Next in line the ones with meat filling. It goes into the category of fast food/street food/cheap food.

My mum and her sisters in the old Yugoslavia made rolled burek. The meat and onions filled the tube shape, wrapped around in an ever widening circle. They took their rolled burek secrets to heaven with them.

Hello Hels, Nothing like the dishes you describe was served in my family, although my great-grandmother did make hand-stretched strudel, quite something both to see and to eat. I did start tying some Mediterranean foods once I went to college, where thee was a large Greek population and a number of Greek restaurants.
--Jim

that is so true! I lived in Israel for 3 years in the late 1960s and early 1970s, and had to learn how to: speak with an Israeli accent, understand Israeli politics and enjoy the national cuisine. Felafel and chumus not so great; bourekas REALLY great :)

I don't know where your family came from exactly, but I do know the Serbian realms disappeared when they were overrun by Ottoman conquest. At least until later when they revolted successfully against the Ottomans. The influences of those Turkish authorities must have been powerful and lasting, as you lovingly demonstrate re the rolled burek with meat and onions.

history of all kinds is valuable, although I have hardly tackled food history myself in this blog. But everybody has their own family food stories, as you remembered, and of all their overseas trips, most people remember the local foods best.

You remember the Greek restaurants near your university because the food was both novel and tasty. I remember the first time (in 1964) when a friend took me to eat felafel in pitta.

Simple food made very interesting. I'd like to try Borekas and a Halal Snack Pack.

Hi Hels - I love this sort of food ... I so often make Spanokopita - usually in a pie, as I've never mastered the making of pastries per se ... but the history of food is a fascinating subject - and I always love reading about it. Thanks for this - delightful post - cheers Hilary

I used to eat once a week with my grandparents and then with my parents, taking the children with us as they grew up. Both my grandmother and mother made mushroom or potato bourekas, adding dollops of sour cream on the top. But since then, we have had to buy frozen packets of bourekas from the supermarket. They are excellent, so if you need advice re your commercially produced foods, just drop me a line :)

Spanokopita is stuffed with spinach, onions and cheese that are all enfolded by flaky filo dough. Depending on the shape, spanokopita can look like a round pie or triangular bourekas.

Video about the history of the Pizza:

There is never an end to learning about other nations' cuisines, is there