Sacco & Vanzetti, executed in the USA for their anarchist politics in 1927? 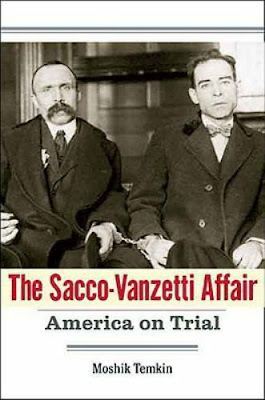 The two men shackled together,
The Sacco-Vanzetti Affair: America on Trial, 2009
by Moshik Tem­kin.

Each experienced prejudice against impoverished Italian immig­rants and each joined the loose anarch­ist community ar­ound Luigi Gall­eani’s Sub­versive Ch­ron­icle. During the suppression of radicals that began during WW1, Galleani’s men were targeted by the U.S Bureau of Immig­rat­ion. Dozens were deported! Subversive Ch­ron­icle was banned by the US Mail for advocating anarchy.

The two did not become close mates until a 1917 strike. Neith­er had a crim­inal record, but both were known to local police for being strike supporters of the unemployed. So they went with others to Mex­ico towards the end of WW1, per­haps to avoid conscription. Or per­haps to get to Russia to join the Revolution. In either case, when they returned to the US post-war, they found their revolut­ion­ary mates had been driven underground.

In Apr 1920 an armed gang attacked a payload going to a shoe company in Braintree Ma. The pay­master and sec­ur­ity guard were shot dead, and the cash was stol­en. Police set a trap for suspects, using an Oakland car from the rob­bery. Sac­co and Vanzetti accomp­an­ied ot­her anarchists, try­ing to re­claim the car from a garage. When the other suspects escaped, Sacco and Vanzetti were arrested on a tram, each legally car­rying a gun.

Arrested in May 1920, it was clear that a fair trial would be al­most impossible, with prosecutors signalling that they would try the men mainly on their anarchism.
Italian anarch­ist Carlo Tres­ca had been a leader of the Industrial Workers of the World/IWW. He had al­ready led in the land­mark Lawrence Strike of 1912 and had organised the defence of other ind­ict­­ed Italians, leading to their acquittals. Tresca organised mass sup­port for Sacco and Vanzetti via newspapers, posters and demonst­rations. And he brought in the successful IWW lawyer from the Lawrence cases, Fred Moore. To finance it all, Tesco mobilised the IWW’s Gen­eral Defence Com­mittee which rais­ed funds nationwide. Meanwhile Tresca’s colleague Elizabeth Gurley Flynn mobilised the International Labour defence.

According to Prof Moshik Tem­kin’s 2009 book, The Sacco-Vanzetti Affair: America on Trial, these impoverished Italian immigrants were fed up with their ex­p­loit­at­ion under American capit­alism. So in the 1920s, the US gov­ernment was actively hunting an­archists! And while the 2 men were in prison, res­tricted immigration quotas became law! But if the justice system wanted to make an example of Sacco and Vanzetti, it ended up making them martyrs. During their 6 years on Death Row, these thinkers’ letters persuaded people of their innocence. 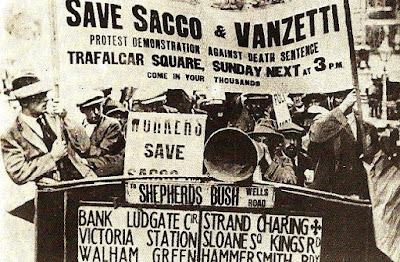 Fred Moore decided it was no longer possible to defend Sacco and Van­zetti solely against the criminal charges of murder and rob­bery. Instead he would have them frankly acknowledge their an­ar­ch­ism in court, to establish that their arrest and prosecution stem­med from their radicalism. He exposed the prosec­ution’s hidden motive —to assist the Federal authorities in sup­pressing Italian anarchism.
Presiding Judge Web­s­ter Thayer barred new evid­ence and referred to the defendants as anarchist bastards. 3 key prosecution witnesses stated that they'd been coerced into ident­ifying Sacco at the scene of the crime, but when conf­ront­ed, they denied any coercion. These conflicting accounts should have cast doubt on the testimony. Ditto the fact that the stolen money was never recov­ered.
Public opinion swung behind Sacco and Vanzetti, as it became more evident that they were being railroaded. Nonetheless af­t­er a 6 weeks trial, the jury found Sacco and Vanzetti guilty of robbery & murder in Jul 1921 , based largely on circumstantial evidence.
In 1924’s appeal, Fred Moore was replaced as chief defence council by William Th­ompson, respected and connected Boston lawyer. The court­room strategy swung back to legal technic­alities. In May 1926 the Massachusetts Supreme Judicial Court ruled, not on the evidence but on the judge’s conduct of the trial, that there had been no error.

As Thompson filed new appeals, support for the men con­t­inued to grow in radical, socialist and then in respectable lib­er­al circles. Harvard law Prof Felix Frankfurter rallied legal opinion behind the Italians. He pub­lish­ed his case for a new trial in the influential Atlantic Monthly.

Af­ter the men were condemned on shaky testimony and doct­ored ph­ys­ic­al ev­idence, the Supreme Judic­ial Court held another hear­ing based on new evidence from gang-leader Joe Mor­el­li. Again they ruled against the appeal, not denying the truth of the new evid­ence but up­holding Judge Thayer. De­spite 7 appeals, their re­qu­est for new trial was rejected and Judge Thayer confirmed the death sent­ences. 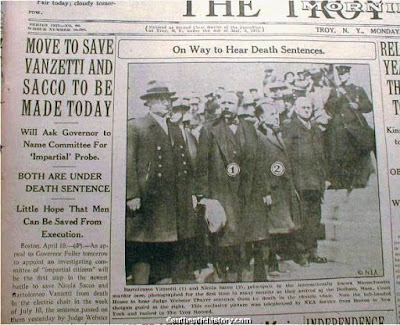 After the 1927 execution, 10,000+ viewed the men’s bodies in op­en caskets before the funeral parade, all of it filmed. Pol­ice block­­ed the route past Boston’s State House, then a service at For­est Hill Cemetery and cremation. Later, Motion Picture Production Code sens­or Will Hayes ord­ered all news­reel companies to destroy their funeral footage.
Outrage took over! The killings set off demon­strations in Amst­er­dam, Berlin, Joh­annesburg, Geneva, London, Paris and Tokyo. Strikes erupted ac­r­oss Latin America. The executions radicalised intel­l­ect­uals, especially when The Letters of Sacco and Vanzetti were published in 1928. Writers HG Wells and George Bern­ard Shaw den­oun­ced the frame-up. Nobel Prize writer Anatole France, of Dreyfus Affair defence fame, wrote an Appeal to the Amer­ican People. Upton Sinc­l­air wrote a novel about the meat-packing industry, and Ben Shahn mem­or­ial­is­ed them in 23 famous images in 1931-2. Woody Guthrie, Pete Seeger and Joan Baez wrote prot­est songs. 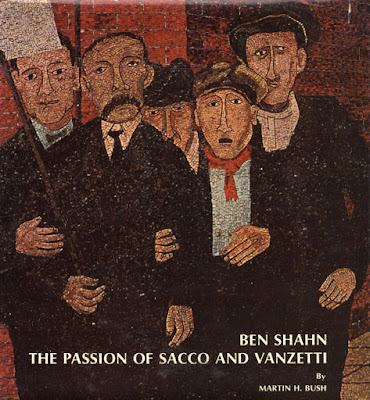 The Passion of Sacco and Vanzetti, by Ben Shahn,1931-2
Shahn shared the view that the case against the two men was weak
Conclusion
Guilt of the immigrant Italian an­archists, executed in Aug 1927, was irrelevant; their deeply flawed trial had reflected racist prej­ud­ice. For a decade, leftist organisations’ efforts went into rais­­ing money for other martyrs’ legal defence and for the supp­ort of the families of gaoled militants. Similar patterns happened aft­er: 1950s McCarth­yite suppression, 1960s anti-war movement and early 70’s milit­ant Black movement. Capital punishment was always barbaric, but even more so in 1927.
Posted by Hels at 9.1.21

Thanks for inviting me to read your article, Helen. Apart from the anti migrant feeling in the police and community, the rot set in with the presiding Judge Thayer. Permanently.

I never heard of these people. Although I am still in disbelief what happen in my country.
Coffee is on and stay safe

this was a terrible series of court cases in the USA and should have taught them a lot about hatred and fear of migrants, and of workers' unionism. But I imagine that many countries had prejudiced police and court systems, and faced the same dilemmas.

Look, for example, at the riots and dangers that faced immigrant workers in Australia at the same time:
https://melbourneblogger.blogspot.com/2015/01/brisbane-1919-racist-red-flag-riots.html

I noted that presiding Judge Web­s­ter Thayer was rigidly anti-migrant; he barred new evid­ence from being presented in court and referred to the Italian defendants as anarchist bastards. But you are right... it became worse.

When the appeals and new evidence went to the Supreme Judic­ial Court, the Supreme Court ruled against the appeal, not denying the truth of the new evid­ence but up­holding Judge Thayer's right to making the final decision. All re­qu­ests for new trials with new judges were rejected!! Judge Thayer confirmed his own death sent­ence orders!!

Hello Hels, So many trials ended up punishing the crime or a group of people rather then fairly debating the guilt of the accused. Often in a vicious murder, the first person arrested is convicted mainly out of a desire to punish the crime and not let someone "get away with it" despite the often poor quality of the evidence.

Conversely, sometimes a trial is technically fair, but the mob public has made up its own mind, and will storm and riot to show their displeasure with the verdict. It is not only one kind of people who can make an unruly mob. Of course, it is an extra disgrace when it is judges, shown officials and juries who act unfairly or unprincipled.

even historians are "protected" from horrible events in their own nation's history. So I am not at all surprised that you hadn't heard of Sacco, Vanzetti, their colleagues, police, lawyers, newspaper men etc that were totally involved between 1920-27.

I studied history for 6 years in high school and 4 years at uni, and found only late in my studies that Britain didn't ban slavery until 1833. Shameful episodes have to be rigorously dug up, decades later.

I suppose I can agree that a speedy resolution and rapid justice were seen as the vital issues. And this would be particularly true when the massacres of WW1 were just over, or the country was facing a vast Depression, or the nation was falling apart on racist lines.

many thanks and Happy New Year to you.

Which part of history and art history are you most interested in?

World wide protests over the executions and I knew nothing about it. I remember active anarchists in Melbourne in the 1980s but not at all in the last couple of decades.

the crisis was so great that Prof Temkin reiterated that the full national and international scope of the Sacco-Vanzetti affair made the two men the centre of a global cause célèbre back then! Even more significantly, he wrote that the crisis transformed America’s relationship with the world.

That might have been true in 1927 and after, but not now.

Hi Hels - I hadn't heard of these men, nor the background ... though certainly can believe what happened - sad, but true. Really interesting to be made aware of - thank you - Hilary

Judge Thayer wrote of Vanzetti: "This man, although he may not have actually committed the crime attributed to him, is nevertheless morally culpable, because he is the enemy of our existing institutions".

Had these two Italian immigrants been deported back to Italy for their political beliefs, as had others during the suppression of radicals that began in WW1, nobody would have known about the case. But instead of being tried for their political beliefs, Sacco and Vanzetti were hanged for murders they did not commit. This was the most obscene part.

It is an important story, isn't it, even 100 years after the events occurred. Why do you think most readers, even historically aware readers, don't know much about Sacco and Vanzetti?

Two items came to my attention. Funny how these things seem to show up as oddly timed coincidences.

The first is a very interesting op-ed by Rania Batrice which appeared in the Boston Globe on Thursday. In it she argues that the recent right-wing attack on the US capitol has given rise to applying the word "terrorist" to various groups and organizations. She points out: "The framework of terrorism has often been used to target peaceful political activity. This is about the slippery slope."

And the second item is a brief "this moment in history" account of Boston's "Great Molasses Disaster" which occurred on January 15, 1919 when a huge storage tank of molasses burst causing great death and destruction in Boston's immigrant North End neighborhood. This was just about a year prior to the Sacco and Vanzetti robbery, and the article makes mention of the owner of the molasses tank attempting to blame the event on the action of "anarchists."

I'm not sure whether these is really an over-arching historical continuity to all of this, but I thought you might find it intellectually interesting.

Many thanks. I carefully read your story of the Great Molasses Disaster in Boston, and was totally fascinated by both the timing (1919) and the blame attributed to anarchists. Now I will have to consider all the other bombs and crises in the USA after the Russian Revolution and the end of WW1, and expand the emerging pattern to include the Boston catastrophe.