Judaism was first practised in Van Diemen's Land by male convicts or free settlers from London’s Jewish East End. Lack of wives had made it difficult to form a trad­it­ion­al Jewish community, but by the 1840s the num­bers had increased and thrived sufficiently to require religious facilities.

Britisher Samuel Moses (1807–73) and his family sailed to Hobart in Feb 1841. Samuel became a partner with Louis Nathan in the merchant firm Nathan and Moses, importing and exporting via Hobart’s wharf. The Moses brothers changed their sur­name to Moss and opened for business in Launceston as Moss and Nat­h­an Shipping Agents. These retail and wholesale traders exported Aust­ralian wool to Brit­ain, and shipped whalebone, whale and fish oils to the Australian colonies and New Zealand. 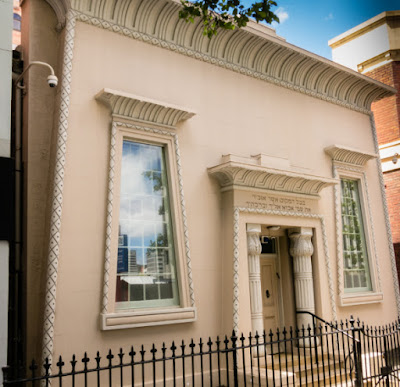 Louis Nathan and Samuel Moses were among the founders of Hobart Synagogue. Nathan became the first President of the Congregation, elected soon after he arrived in the colony, and served in that office for 10 years. The deed for the synagogue land was granted to Samuel and David Moses, and Isaac Solomon; leading subscribers to the build­ing fund included Louis Nathan, Samuel Moses and Rosetta's father Henry Moses of London.

The Courier Newspaper of Aug 1843 described Hobart’s synagogue, just as it was opening: This simple but elegant building is under the active sup­er-intendence of Kirk and Fisher, well-known builders of our city. The plans are from the classical designs of JA Thomson, who has with great propriety adopted Egypt­ian revival architecture for the arch­itecture of the temple, which Thomson has accurately followed. The front is now finished, and the carving of the pillars on each side of the door way and the windows is in a style of chaste beauty, unusual in this colony. This part of the carving work has been done by Fisher him­self; and it ill­ustrates the origin of ornamental architecture deriving from the splendid architecture of nature.... The Synag­og­ue is a miniature Egyptian temple of the great, palmy days of the Pharaohs, such as enhanced the gorgeous architecture of those palace cities of Tyre, Sidon, Babylon, Memphis and Thebes now all laid in the dust; The in­terior will present a specimen of colonial arch­it­ecture still unrivalled.

Exaggerated perhaps, but note Hobart’s front featured a clear, trapezoidal facade and main win­dow with the Star of David, with a single bal­cony inside. I also like the connection to con­victs; J.A Thomson was a Scottish convict who’d been transported back in 1825 and the land had been part of Londoner Judah Solomon’s garden. But note that the hard benches at the back of the building were for the Jewish convicts who were marched in under armed guard.

Samuel Moses was a cultural leader in Hobart and the first Jewish Justice of the Peace in Australia and New Zealand. He presided over hearings at the Police Office in Hobart and at Supreme Court hearings, where he presided with a Judge; many of those charged with offences were convicts or ex-convicts. But in court hearings about financial contracts, other defendants, plaintiffs and witnesses came from across col­on­ial soc­iety. As a result of these religious, judicial and commercial resp­onsib­il­it­ies, Moses became one of Hobart's best-known leaders.

The Hobart Hebrew Congregation always continued com­­munal life. Whenever there was no ordained minister in Hobart, Sabbath services in Hobart were/are led by skilled locals.

Now to the north of the island (see map below). In 1844, Louis Nathan’s merchant firm bought fine ves­s­els to be based in the Port of Launc­est­on, including four whaling brigs, several schooners and barques. And Samuel's brother Moses Moss became a founder of the Launc­es­ton Hebrew Congregation in St John St, which was built in 1845. 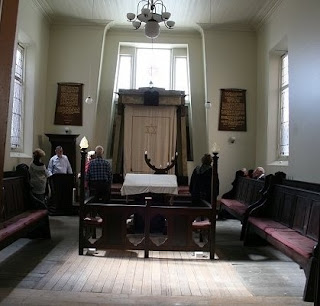 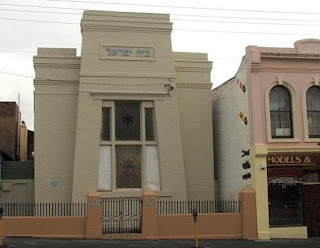 The building was designed by Richard Peter Lambeth and constructed in 1844 by builders Barton & Bennell. Once again using Egyptian Revival Arch­itecture, we can still see the trapezoidal stained glass windows and façade similar to Hobart’s. The Launceston synagogue was consecrat­ed in 1846 when the first minister was appointed and prayer services started.


Samuel Moses, his sons Alfred and Hyam Moses were also com­mitted members of The Royal Society of Van Diemen's Land. This was the first Royal Soc­iety outside London, established in 1843 to ad­vance science and to progress the colony under the Queen patron­age. The Society’s gar­d­ens, plants, library, art and artefact coll­ect­ions became the core of the Royal Tas­manian Bot­an­ical Gardens and the Tasmanian Museum and Art Gallery. Samuel and Hyam were also appointed Life Members of the Hobart Library.

In 1847 it was arranged that all Jews in Hobart and Launceston pris­ons could attend synagogue and to refrain­ from work on Sabbath (Saturday). Pass holders were permitted to be counted in a minyan-ten men needed to participate in public prayer.

The 1848 census recorded 435 Jews in Tasmania, but the numbers went down as some settlers left for the mainland or New Zealand. As a result, the Launceston Synagogue closed in 1871. The name of the colony, Van Diemen's Land, was changed to Tas­mania in Jan 1856 and the last convicts arrived in the 1860s.

In 1923, Sim Crawcour and Harry Joseph of Joseph’s Menswear helped Launceston Synag­og­ue’s revital­is­at­ion. European refugees arriving in the 1930s boosted the numbers so that the Launceston Synagogue could re-open from 1939. 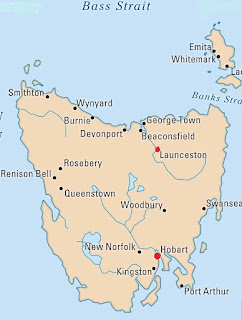 In 1989 the Launceston building became listed with National Trust of Austral­ia who have been caring for renovations and maint­en­ance. This heritage-listed property is actually jointly held by the Jew­ish community of Launceston and the Nat­ional Trust. There are only a few dozen Jews in Launceston today, but the synagogue opens up each holy-day, bar mitzvah, wedd­ing and for tourist groups.

Hi Helen, hope you are well.

Why did they choose Egyptian Revival architecture, do you think?

Tasmanian Geographic wrote that the Napoleonic Wars, which contributed to Judah Solomon’s presence in Hobart, seemed to have also shaped the style of the synagogue. Napoleon’s recent conquest of Egypt had made interpretations of Egyptian style popular. It symbolised a new world of knowledge and a sense of history, appropriate for a new congregation of an ancient religion.

Hello Hels, Although I admire these Egyptian Revival temples quite a bit, I am not sure that I agree with The Courier about their appropriateness for a Jewish temple. After all, Jewish people still get together every year at Passover to celebrate their deliverance from ancient Egypt. The Egyptian Revival was popular at that time period, sometimes for houses or temples, but it seemed to find its true home in cemeteries and their gates--check out this beautiful 1831 example at Mt. Auburn Cemetery in Cambridge, Massachusetts:
https://mountauburn.org/egyptian-revival-gate/
--Jim

When we, eventually, return to Australia and our friends on Philip Island, we will all be going to Tasmania. Now we have something to look forward to! The story you have told is very appealing.
I actually like Egyptian revival style. I have seen synagogues all around the world in an amazing array of architectural styles from Rhode Island to the Caribbean and Budapest to Dublin.
CLICK HERE for Bazza’s unexpectedly uxorious Blog ‘To Discover Ice’

oh the sweet irony... sending British convicts in chains to a penal colony in Australia that evoked Egypt's bondage of slaves thousands of years before.

Every style has its special era under the sun, c1820-45 for Egyptian architecture and decoration. Thus any important facility being built in that era might have been Egyptian because it was the owner's preference or, more likely, because it was on trend just then. As you say, I found heaps of churches, synagogues, university buildings and cemetery facilities etc, all from the same era.

email me before you two leave home and we will arrange a shabbat dinner :)

Tasmania is a dream trip for historically interested visitors, especially Hobart and Port Arthur. But beware.. the British colonial authorities were often brutal.

Hi Hels - I'd love to visit and see them ... and appreciate the information you've given us. It always amazes me how people settled the world and set up trading routes. All the best - Hilary

Australia was seen as the end of the world back then, and Tasmania was probably the most remote part of Australia *nod*. So ship building and trade became critically important in the early decades of settlement, whether the settlers were there by free will or were locked up there involuntarily as convicts.

75,000 convicts were shipped to Tasmania until 1853, when transportation ended.

I know I keep saying this, but I had no idea about Tasmania having the first Synagogues. I love the phrase 'style of chaste beauty'.

Victorians were always so proud that we did not start as penal settlements like those slackers in NSW and Tasmania! But history changed and many Australians started to feel proud to have a convict in their family history. No wonder Hobart etc are pouring effort into preserving their early architecture.

It is so easy to destroy historical architecture...I am proud the two Tasmanian communities restored and preserved theirs.

Thanks for the post. It is impressive research. However, it should be pointed out that we haven’t had a minister (much less ordained) since 1956. Also our new digital archives can be found here: http://www.hobartsynagogue.org/archives.

I remember years ago going to an auction of the old Brunswick synagogue in Methven street . It was quite shabby and had a wonderful atmosphere . I would have loved to have bought it but alas didn't have the cash at the time . It has since been converted into a really lovely home . I often think of relatives who may well have worshiped there years ago although I suspect that most of them were rather nominal in their faith.

those digital archives are great reading, many thanks.

I was young when my family left Carlton, but I remember the Carlton and East Melbourne shules very well. David Havin published a nostalgic book covering the shules and institutions of the close northern suburbs which I recommend:
https://www.cosv.org.au/indarch.php?article=81

Thankfully Brunswick has since been converted into a lovely home. So many historical sites get destroyed every year.

For their criminal activity in England during its 1819 crime surge, Judah and Joseph Solomon were sentenced to death. Those sentences were commuted and they were transported to Hobart, arriving in 1820. Each was separately assigned to private duty in a master’s house. While in this indentured servitude, they opened a small general store on Argyle Street offering imported items, tailoring and watch repairs. Three years later they received tickets-of-leave, allowing them freer movement.

Meanwhile the brothers built a grand Georgian-style building on the corner of Argyle and Liverpool streets to serve as both residence and for business purposes. It was orig¬in¬ally called Temple House, as services were sometimes held there before the Hobart Synagogue was built. Ultimately the brothers and 74 others pooled money, establishing the Bank of Van Dieman’s Land. By 1832, the brothers received conditional pardons and Judah donated part of the garden belonging to Temple House to build it.

I always thought capital punishment was an obscenity, and now I know that Hobart would have agreed. Those brothers arrived in appalling penal conditions and within 12 years had totally turned their business and community life around.