Plague doctors - in the 17th century

The plague doctors were European men who specialised in treat­ing plague victims, at least from the Black Death (1348-9) on. These doctors were public servants hired by villages, towns, or cities when a plague struck.

As plague doctors were in contact with victims of a fatal dis­ease, they were at grave risk of catching the plague themselves, and had to protect themselves. So the plague doctor mask became one of the most recognisable symbols of the past pandemics. But while plague doctors have been pursuing their trade since the Middle Ages, it was only during the C17th that they started getting smarter.

In 1619 the idea of a plague suit and beaked mask was invented by Dr Charles de l’Orme, chief physician of 3 French kings (including Louis XIV), and of Gaston d'Orléans, son of Marie de Médici. His design was based around miasma theory, the contemporary theory that ill­ness spread through deadly rising vapours. By the time the 1656 Plague struck, trag­ically killing almost half a million people in Rome and Naples, his prototype was improved and used routinely by all plague doctors. In fact by 1656 plague doct­ors were actually mandated, by the con­tracts they signed with mun­icipal coun­cils, to wear the outfits.

The suit minimised exposure of the skin with a long over-coat. The neckline of this overcoat was tucked behind the plague doctor’s mask and extended all the way down to the feet. The entire piece of clothing was waxed with suet, to repel the plague from the doctor, or draw it away from the victim. In order to protect the lower body from infection, l’Orme’s suit had a pair of goat leather breeches beneath the overcoat. And leather gloves protected the hands.

A wide brimmed hat was worn on the plague doctor’s head, made of leather to ind­icate that its wearer was a doctor. Although the hat served a sym­b­olic function, it may have provided some protection by keeping some bacteria away. 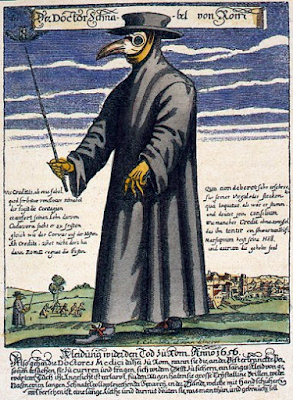 
Sincet l’Orme’s plague suit was to protect from miasma, it was uncertain how effective the outfit could ever be. Clearly many plague doctors died from their patients’ plague, so it was likely that l’Orme’s invention did little to protect the doctors, [except to offer some protection against germs].

The plague doctor mask was bird-like in shape, with a long beak and the round eye-holes covered with clear glass. Some people believed that the plague was spread by birds. So the disease might have been removed from a patient by transferring it to the garment. More likely the mask had a utilit­arian function, as the beak was packed with strong, aromatic spices like mint or rose petals. These were meant to ward off the dis­ease because people believed miasma spread the disease.

In any case the plague mask became well known because of its use in theatre. The beaked physician figure became a character (Medico della Pesta) in commedia dell’arte-professional theatre and the mask is still worn in the Carnival of Venice. Plague doctors were such a common sight in Ven­ice carnivals that this symbol of mort­ality became central in the annual cele­brat­ion of life.

And the plague doctor carried a wooden cane, for several reas­ons. He could use the cane to examine his patient without touching, take a patient’s pulse or to remove his clothing. And to issue in­st­ruct­ions eg commanding the use of urine baths, purgatives or stimul­ants. The cane could also be used to in­d­ic­ate to the vic­t­im’s family members where to move the patient or body. Fin­ally the cane could be used to protect the doctor against patient assaults. 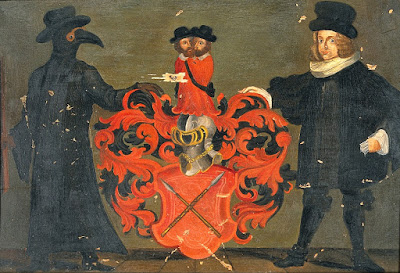 Eventually it was learned that the plagues were caused by bacteria that could be transmitted from animals to humans (eg flea bites) and inhalation of infectious droplets from coughing people with pneumonic plague. Still, I imagine that terrible memories of the plagues over the centuries are being relived in Italian cities during the current coronavirus pandemic.

Apart from the beak and cane, that is pretty much how the doctors look now with covid19.

True! I was going to call this blog post: "The Plague: the more things change, the more they stay the same".

Hello Hels, And I thought that modern face masks were uncomfortable--imagine the suffocating discomfort of those doctor's costumes, especially in warm weather. Masks are now required in most places in Taiwan--stores, hospitals, and even now all public transportation. Also, just walking outside most people wear masks, although they don't seem to pay too much attention to correctly distancing themselves. The problem is getting the masks--there is a way to get a few from the government, but the red tape and rigmarole is unbelievable. I'd almost prefer to attempt to make some myself from old material--maybe it's time to test myself with a new skill.
--Jim

I love that image! It's found its way onto my pages as well. Miasma is such an evocative word, no? We need to use it more often!

Nod...the face mask has always been important, in all sorts of different settings. The cowboy, for example, wore a loosely tied bandana around his neck, to absorb sweat and keep the dust out of his mouth, nose and eyes. He tied the bandana backwards and pulled it up well over his nose.

People will always find something to protect their face, even if they have to improvise.

In miasma theory, diseases were caused by the presence in the air of a poisonous vapour. Although the suspended particles of decaying matter that floated up were invisible, they inevitably caused disease in dirty city neighbourhoods with no sanitation.

I would have thought people would be scared to death by seeing the bird-like doctor's apparel.
I don't think that protection for front-line health workers has improved at the same rate that medical knowledge has. It's difficult to understand how early plague victim's and survivors could have any faith in medicine.
CLICK HERE for Bazza’s inwardly incandescent Blog ‘To Discover Ice’

The plague doctors then were as brave as they are now putting themselves on the frontline even with the protective clothing.

There must have been some protection, even if they were protecting against the wrong thing. It was believed that miasma in what was jokingly called Smellbourne was responsible for disease, especially on the flat areas near the Yarra.

It is extraordinary how many doctors, nurses and hospital workers have contracted the current epidemic and of those, quite a number died. There is still no vaccine, yet it seems appalling that health care people are sent into hospitals without every known protection. Why do hospital staff agree to it?

Those plague doctors were heroic.

There were only three ways of trying to save victims from the old plagues:
1. Religious prayers and rituals
2. Medicine eg vinegar, arsenic, mercury or bloodletting
3. Turning away ships and other isolating measures.

Hi Hels - there's so many posts coming up about the pandemics over the ages ... I'm finding it really fascinating ... so thank you for your thorough take. I went to see a very small exhibition at the Guildhall with some basic information on plagues ... it was a couple of years ago. But it seems it's all being covered ... I did think of writing a post - take care and thank you for yours - Hilary

Regardless of which pandemic we are discussing, so many of the issues are the same *nod*. Is it viral or bacterial? Where did it start? How did it transfer to humans? How is it passed from one human to another? How can an individual reduce the chance of being infected? If a person is infected, does that protect against all future infections? Are there any treatments? Are there any vaccines?

Sounds exactly like the Spanish Flu, or Ebola, doesn't it! I wish I saw the exhibition you saw.