Was Beethoven inspired by Napoleon Bonaparte?

Intellectuals th­roughout Europe looked on Napoleon as a hero at first, including German artists such as Goethe. As a youth, Ludwig von Beet­­hoven (1770-1827) was attracted by the ideals of the French Rev­ol­ution. His early writing was scattered with revolut­ion­ary sentim­ents and disdain for organised religion. Thanks to Christopher George and Alexander Lee for their excellent articles.

When Beethoven moved to Vienna to study with Franz Joseph Hay­dn, he took his views with him. However since a police state existed in Aus­tria in the 1790s, Beethoven knew not to flagrantly display his sup­p­ort for the revolutionary movement there. Afterall, Beet­hoven was still a German provincial from Bonn.

So as he gained fame as a composer in his own right, his democratic fervour was abating. Welcomed to the Viennese nob­il­ity’s salons, Beethoven adapted himself to his patrons’ tastes. He put on aristo­c­rat­ic airs, claimed descent from an old baronial family and adopt­ed the nobiliary particle “von”. Though he remained a passionate defender of liberty and secularism, the composer now believed that the French Rev­ol­ution had gone too far. He too regarded the Reign of Terror with horror.

By 1800, Beethoven was traumatised to realise that his deafness was worsening. In April 1802, Beethoven left Vienna for Heiligenstadt, a village near Vienna. The Heilig­enstadt Test­am­ent was an emotional document in which Beethoven placed himself as a hero, stricken by deaf­ness, with­drawn from mankind, conquering suic­ide.

But surrounded by nature, he recovered and found a new sense of musical purpose. Wandering in the country, he toyed with a theme in E flat major and soon had a comp­letely new symphony in mind – original and triumphalist. 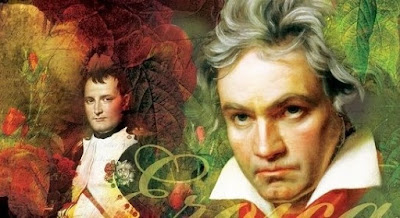 Against his personal anguish, the composer showed his politics. This 3rd Sym­ph­ony Eroica was one of a series of planned dedications to en­light­ened lead­ers in 1800-4. While Beethoven was labouring over the score, he decided to name the symphony after Napoleon Bonaparte (1769–1821), then First Consul of France.

According to the composer’s biographer Anton Schindler, the link to Napoleon had first been sugg­est­ed by Jean-Baptiste Ber­nadotte, French ambassador to Aust­ria. But accord­ing to Beet­hoven’s pupil Ferdinand Ries, the idea was the compos­er’s own. As Ries ex­plained, Beethoven had the high­est esteem for Napoleon, like the greatest consuls of ancient Rome. When the score was finished in early 1804, he wrote Symphony For Bonaparte on the cover and proudly left the manuscript on a table for all to see. 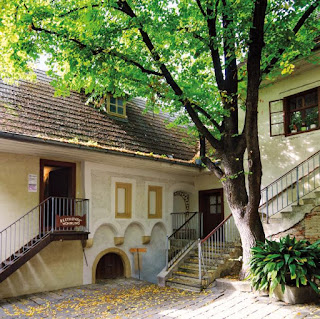 Poor Beethoven. Not long after finishing his symphony, Ries came to him with news that Napoleon had declared himself Emperor of France (May 1804) and was crowned (in Dec). Beet­hoven flew into a rage, shouting: So he is no more than a common mortal! Now he will think himself superior to all men and become a tyrant!’ Beet­hoven strode over to the score and scribbled out the title so violently that he tore through pap­er.

This event gave rise to an image of Beethoven as a lover of lib­er­ty, an admirer of the French Revolution and a repub­lic­an. Having once admired Napoleon as the god of revolutionary princ­ip­les, the composer later re­viled him for sacrif­icing those very principles.

Ries’ version was suspect be­cause he wrote down his rem­iniscences years later. Schind­ler’s claim that the idea of naming the sym­phony after Napoleon had been suggested by Bernadotte was clearly false. Though Bernadotte had indeed served as the Fren­ch ambassador to Austria, he had quit his post in dis­grace in 1798 and left. In any case Schindler was a known democrat, who destroyed or doctored many of Beethoven’s papers after the comp­os­er’s death.

Beethoven wrote to his pub­lish­er, disapp­oint­ed that Nap­oleon had concluded a concor­dat with Pope Pius VII and thereby shatt­ered the sep­ar­at­ion-of-Church-and-state dream. Yet Beet­hoven saw Napol­eon as a necessary correct­ive for the excesses of the Revolution, produc­ing political order out of chaos. Napoleon knew how to keep a firm hold, plus he had an appreciation for art and science.

So it was for practical and financial reasons that the com­poser no longer publicly acknowledged Napoleon as the inspir­at­ion for the symphony. He removed Napoleon’s name so as not to lose the patronage of a noble who had been scan­dalised by the Fren­chman’s actions. Note Beethoven dedicated the Eroica to Prince Joseph von Lobkowicz, who had given him 400 ducats for the rights to the music and who later became one of his most ardent supporters.

The symphony received its first private perf­ormance in Dec 1804 at Prince Lobkowitz's palace. It would not have been politically wise for him to have retained an identification with Napoleon. War with France was once again looming, so pat­riotic Lobkowitz raised a battalion of troops against the French. Austria was an implacable foe to Napoleon, at war with France for 13.5 years!!

The first public performance of Eroica Symphony took place in Vienna in Apr 1805 with Beethoven himself conducting. The work did not please the public who thought the symphony too heavy and too long. Refusing to modify the score, Er­oica remained Beethoven’s personal favourite.

The composer admired Bonaparte as a Republican con­sul, but may have thought he could not tolerate him as an auto­crat. Yet Beethoven did not turn­ his back on the Imperial family. In 1808 Napoleon’s broth­er, King Jerome Bonaparte of Westphalia, offered the composer 600 gold ducats a year to serve as Kap­ell­meister to the Court of Kassel!

In taking the pos­ition, Beethoven would have continued a family tradition. [The compos­er's grand father, Ludovicus van Beethoven, had been Kap­ellmeister to the Elector of Col­ogne in 1733]. But before young Ludwig could accept tainted Bona­part­e money, Viennese Archduke Rudolph offered Beethoven 4,000 florins a year.

It was only after Napoleon crushed Austria in the War of the 5th Coalition 1809 that Beethoven’s enthusiasm ended. Shaken by the French bombardment of Vienna and fearful of being compromised by a Bonaparte association, he rep­udiated Napoleon! Contempt grew as the emperor ranged across Europe like a conqueror, especially in Vienna. Beet­hoven was now identified liberty with Germanic patriotism.

Shortly before the Emperor's exile on Elba, the composer sided with the Allies. So he wrote a short orchestral work celeb­rating Emp­eror's nemesis, Duke of Wellington, in 1813. The Battle of Vitoria Symphony celebrated the decisive British victory over Napoleon's troops in Spain in June 1813, and became Beet­hoven­'s greatest comm­ercial suc­cess. Beethoven dedicated Wellington's Victory to Britain’s Prince Regent and sent him an engraved copy of the score.

A most interesting post! I have heard that in France, Wellington’s Victory is called The Battle Of Vitoria.

absolutely so! This was the battle that _finally broke Napoleon’s power in Spain_. The English, Spanish and Portuguese armies under the Duke of Wellington defeated the French army under Napoleon's brother, King Joseph Bonaparte of Spain. So it was both militarily and symbolically significant.

Beethoven’s admiration for Napoleon Bonaparte provided the inspiration. Napoleon held the promise of bringing freedom to Europe, toppling the monarchies of Europe and replacing them with Republics. Beethoven became a Napoleon fan and conceived his new symphony as a tribute to Napoleon’s heroism and revolutionary spirit. The heroic passages for three French horns (instead of the usual two) seem to represent Napoleon himself. But as we all know, Beethoven became completely disillusioned after Napoleon declared himself an emperor. The famed story of the symphony’s name change from Bonaparte to Eroica is significant.

I read Russell's post and thought it was very valuable, thanks. Beethoven was clearly interested in the ending of old monarchies and Church influence in state matters. But he also went to lengths to highlight Napoleon's heroism in the music.

Hello Hels, It is important to remember that creative and artistic works are never created in a political vacuum. Also that works that were created somewhat independently, while still a product of their times, can become extremely politicized (the Mapplethorpe photographs are a good example).

Of course, this political association cuts both ways, and poses the problem of how to evaluate or admire creative works when we dislike their political backgrounds (Wagner here is the classical example)!
--Jim

*Nod*. We often ask "what happens if we love an artist's or musician's work, but find out later that the artist had always been a no-goodnik?"

But Beethoven had to answer the opposite question. "What happens if the inspirational person was truly a great role model and all-round decent fellow... But then he changed?"

Hi Hels - such an interesting read ... and a topic about which I know little - the music side of things. Napoleon seems to be egotistical and someone not wanting to prepare, while Wellington was fastidious and was always prepared, while also making sure his army was looked after as best could be. Fascinating post = thank you ... cheers Hilary

I knew a lot about Wellington and even more about Napoleon, but sod all about Beethoven. It goes to show what the priorities of university history departments are!

My late and much-missed mother's passion in life was 19th century composers. She played them all in her younger years, Russians composers in particular, and got enormous pleasure going to concerts in her later years.