Legal London: training barristers in the Inns of Court

In 1346 the Knights Hos­pital­l­ers formally leas­ed out In­n­er and Mid­dle Tem­ple Fleet St to practit­ioners who cal­l­ed them­selv­es the Society of the Temple. On a square mile in the City of London, each Inn was very exclusive.

Oxf­ord University had already been founded late in the C12th and Camb­ridge soon after. Yet des­pite the importance of these two medieval seats of learn­ing, no other university was built until the C19th. Thus the Inns of Court in London together acted as the city's de facto un­i­v­­er­s­ity, founded on col­l­egiate standards. Each inn had a mas­ter, tutors, chap­el, lec­tures, exams and ac­ademic regula­t­ions.

Dancing was a desirable culture for upper-class gentlemen and so the revels were held on feast days. The dances were large af­fairs and the feasts were grand: In 1574 there were 769 barristers, staff and students in the Inns.

The average age at admission was 17, half of them having previously attended University. Although some wealthy merchants were able to send their sons to the costly Inns, the majority of students were sons of the landed gent­ry. 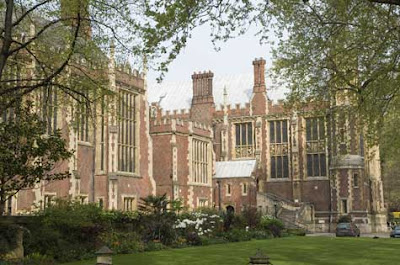 The Utter Barristers were practitioners who used their chambers as law offices, and who taught younger members of the Inns. St­udents also attended courts at Parliament, and part­ic­ipated in moots/mock trials and debates. Ju­dges and senior pract­itioners formed a governing body for each Inn of Court, and were called the ben­chers. Readers lec­­tured during the interv­als between le­g­al terms.

Students began as Inner Barristers. After 7 years, they could be confirmed as an Utter Barrister, qualified member of the Bar. Only then could they be admit­ted to a set of chambers. Senior barr­isters who become King’s or Queen's Counsels “took silk” gowns.

Today the Inns still have the exclusive right to ad­mit barr­is­t­ers to the profession. Even now almost all chambers are still in the Inns of Court. But note that modern students no longer have to sleep in the Inns.

The majority of gentlemen who attended the Inns did not go on in a leg­al career. By the late C16th, only 15% of students purs­ued studies long enough to be admitted to the bar. For the rest, the Inns se­r­­ved as a sort of finishing school, enjoy London’s opport­unit­ies with peers and learn law.

Middle and Inner Temple Inns, geographically and hist­or­­ically so close, are coll­ectively known as The Temple. The red brick gate way, which has been attributed to Wren 1685, leads into Middle Temple Lane. Middle Temple (1560s) survives with one of the best Eliz­a­bethan interiors in London. The hall’s inter­ior is spanned by a double hammer beam roof, officially op­ened by Queen Eliz­abeth I. And she do­n­at­ed a gift of the 30' long high table made from a single oak. Note the spec­t­acular carved oak Armada screen, from the wood of a cap­tured Span­ish gall­eon. The loveliest parts of Middle Temple are the library, dining hall and chapel. 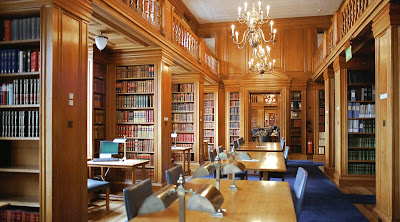 Early Elizabethan drama owed much to the per­formance of plays in these halls at festive seasons. The first English tragedy was written by two members of the Inn in 1561, and performed in the Inner Temple Hall. The first regular Engl­ish comedy was first acted in Gray's Inn Hall, 5 years later. Comedy of Errors was per­formed in Gray's Inn Hall in 1594, between dancing and revelry. It was for a Christmas revel at the Middle Temple that Shakesp­eare wrote Twel­fth Night 1601 which the bard himself performed. Shak­es­peare made mention of the Temple in Henry VI, where he says that the white [York] and red ros­es [Lancast­er], used as badges in the War of the Ros­es, were plucked in Middle Temple Gard­ens.

The two Inns share the round Temple Church off Fleet Street. Built to the Templar pat­t­ern in 1160, it copied the Holy Sepulchre Church in Je­r­usalem. It had a round nave, obl­ong choir and piers of black pol­ished mar­b­le, Norman west door, priests' hall and cloister. There are 9 marble Associates monuments, in ful­l knightly gear. 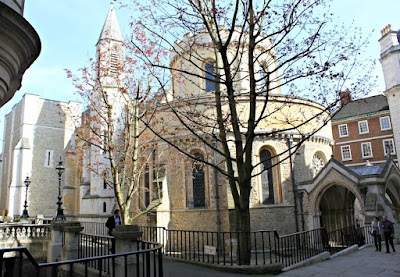 The grandest Inn, Gray's Inn in Holborn High St was foun­d­­ed only 25 years later (1371). Gray’s has a small but lovely hall,  and a hand­some cupola. Gray’s has a lovely C17th gateway and its library has one of the most comp­lete law books coll­ections. Their amazing Span­ish Armada carved screen came from Elizabeth I’s Lord High Admiral!

Although the Law Society is based in Gray's Inn, the costs for running this organisation are provided by all four inns co­l­lect­ively. The Law Society's main respons­ibil­it­ies are: educ­ation of barristers, sch­ol­ar­ships, ch­ambers and publication of professional literature.

The most recent of the Inns, Lincoln's Inn Chancery Lane, was first ment­ioned in 1422 documents and named after the Earl of Lincoln. Note the Tudor gatehouse (1518) and the ch­apel attrib­uted to In­igo Jones. The orig­inal Old Hall was extended twice.

Lin­coln's Inn Fields were laid out in 1618 by Inigo Jones. It was the largest square in London, and the most fash­ion­able. In 1640s it was agreed that smart houses could be built around the square, but that the greenery would never be ruined. It all feels rural!

The neo-Gothic Royal Courts of Justice in Fleet St is modern (1874-82) because, till then, Westminster Palace Hall serv­ed as the King's Courts of Law. Thus there had been no need for an extra, purpose-built creation. Enter the huge central hall of the Roy­al Courts, then sit in many of the court rooms to hear civil cases. Criminal cas­es are heard in Old Bailey.

For 1000 years hideous Newgate Prison was the site where pub­lic exe­c­utions were routinely held. First mentioned in King John's reign and then in the reign of Henry III, the King ex­pressly command­ed the sheriffs of London to repair it. When New­gate Prison was demolished, Old Bailey was erected immed­iat­ely, complete with the bronze Goddess of Justice on the dome. Altogether there are 18 courts in the Central Crim­in­al Court com­plex. 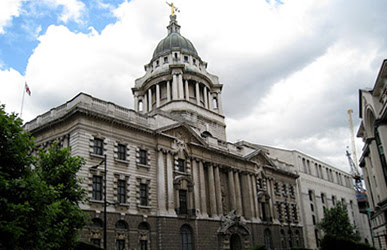 Chancery Lane, between High Holborn and Fleet Streets, was where lawyers bought their books, were outfitted for court and drank wine. The pub opposite the Royal Courts of Justice was once a coffee house for young lawyers.

Then the Public Record Office, the nation's archives of off­ic­ial re­c­ords, once housed in the Tower of Lon­don. It holds import­ant nat­ional material: of­ficial documents, diplomatic corres­p­on­dence and central governmental decisions. The Pub­l­ic Rec­ord Office looks like a Tudor fortress but it is act­ua­l­­ly quite mod­ern (1850s). Only postgrad­uate students and re­sear­ch­ers can get access to this building. But the Public Re­cord Office Mus­eum is open to all.

See Rumpole of the Bailey which was filmed in the Inns.

I saw every episode of Rumpole and learned two things
1) older men of learning must be able to quote classical literature at will and 2) the wife is always She who must be obeyed!

I can only imagine the sheer pleasure I would derive from just sitting in that library!

Hello Hels, I have read about bits and facets of Britain's legal system in various books. Thanks for giving a larger picture and filling in many details, although I'm not sure if I'll ever have an intuitive understanding of its intricacies. While being aware of the age of these inns, I had never thought of them as architectural spaces--another object for my next trip to London--to see what parts are available for public viewing or tours.
--Jim

Hi Hels ... you've given us a very good historical overview of the Inns of Court area and how barristers got their training - especially the back story. It's a lovely area of town and the Temple Church is another delightful interior ... lots to see and to comprehend ... thanks for giving us this outline. Cheers Hilary

I assumed Rumpole was filmed with sets. Ah well, too early for Pomeroy's claret. Horace would be very approving of your post.

I love the gardens of The temple. I just love walking around there its scale is so human and the thought of all those people who have been there before and the topics they were discussing . Its one of favourite parts of London.

Its also interesting that a legal training was a desirable one fro a gentleman to pursue before he went back to his estates or into parliament . Nothing much has changed has it ?

me too :) But I always assumed that barristers were upper class snobs, immaculately groomed and belonged to exclusive gentlemen's clubs. Hilda Rumpole, Claude and Phyllida Erskine-Brown were very upper class, but Horace Rumpole was definitely not.

the library in Inner Temple is gorgeous, as are the others in the Inns. I believe that even if the facilities in private homes, universities and chambers are ordinary, the library has to be an inviting site for breathing, learning and absorbing the natural light.

My granddaughter read this blog post and asked "Why did they need a library? Why didn't they just go on line?"

I presume by Britain's legal system you means the structures and processes, not the contents of legislation and common law - who creates legislation, who creates common law, the various levels of courts, the difference between solicitors and barristers, state Vs federal courts etc. Because Australia, New Zealand, South Africa, India, Canada etc were British colonies, I imagine we all share the same legal structures and processes, even if our legislation and common law have changed since Federation.

it is indeed a beautiful part of town, the architecture of the Inns and church, the gorgeous gardens and all the associated legal facilities. Not crowded and noisy like other parts of London.

both the Central Criminal Court in Newgate St, and the Royal Courts of Justice, are open to the public and you will immediately recognise the architecture and decoration from the Rumpole films. Rumpole's pretend chambers, Equity Court, were filmed in Inner Temple.

barristers had to have space for private thinking, quiet reading of the law, being briefed by solicitors - all away from the hubbub of chambers, phones, fax machines and yelling clerks. That the gardens were always, and are still in the centre of a huge, over-populated city is truly a blessing.

since it took endless years to train as a barrister with no salary to talk about, the young men could only come from families wealthy enough to totally support their sons until 25. If the family had to support other adult children, or if the would-be barrister son couldn't survive the long haul long enough to be admitted to the bar, it is inevitable that other careers sounded far more attractive and financially stable.

Sorry I'm late to this! I have just got back from a week in Knokke, Belgium and only just seen it.
I often lead my Sunday morning walking group to the Inns of Court so much of this post resonates with me. You could have got ten posts out of all the history they contain. My daughter Ruth is a practice manager in Kings Bench Walk, Inner Temple. I love going to meet her for lunch.
CLICK HERE for Bazza’s anxiously adroit Blog ‘To Discover Ice’

it is always important to place our children in careers that assist us with history, music, literature and travel :) My son has a cultural travel agency in Tel Aviv that links Egypt, Israel and Jordan. It has been brilliant for us, plus for every other traveller we know :)

But if I was still living in the UK, I would love to have your daughter's connections for Inner Temple. The architecture, landscaping and history make the area one of the most fascinating sites anywhere.