THONET & DESIGN is an exhibition at the Pinakothek der Moderne, Munich until Feb 2020. Founded in 1819 by Bopparder master joiner Michael Thonet, one of the world's leading manuf­acturers of bent wood furniture has since emerged. The Pinakothek is showing that from a one-man business to a global enter­prise, 200 years of furn­iture design are reflected in the history of the Thonet family business. Their pioneering achievements - the new tech­nologies, design possibilities, dis­tribution and marketing channels - are on display. Later the conn­ect­ion to the Bauhaus design­ers delivered a new type of tub­ular steel furniture. Since these tubular steel fur­n­it­ure and the early bent­wood furniture have long been integrated into the perman­ent exhib­ition of the Neue Sammlung, the current exhib­ition also focuses on the groundbreaking modern designers.

Now, back to the beginning. German born Michael Thonet (1796-1871) founded his first workshop in Boppard on the River Rhine in 1819 and became a joiner. By the mid-1830s he experimented with a new furn­it­ure-making process. The Boppard Layerwood Chair was his first success, although he could not get his technology pat­ented. Basically the Thonet Chair was the result of using light, strong types of wood that were bent into curved, graceful forms via hot steam. Slowly his use of hot steam and sel­ect­ion of light, strong wood set a new standard for comfortable and dur­ab­le furniture.

Thonet eased his task by buying a glue factory in 1837. This enabled him and his four surv­iving sons to open a business in Moravia and to avoid the heavy, carved designs of the past. 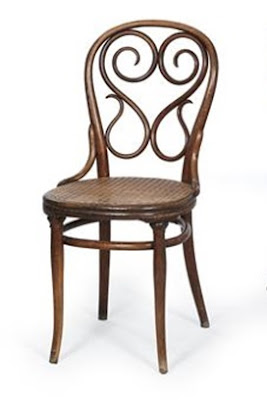 The success of his Chair #14 began in 1841 when Thonet was at the Koblenz Fair and received an invitation from Austrian Chancellor Clemens Prince Metternich, inviting him to Vienna. Thonet soon succeeded in bending solid wood as well: long wooden rods were made flexible with pressure and steam, then bent into the desired three dimensional form with special equipment and muscle power. Together with his sons, Thonet first did parquet work and chairs at Palais Liechten­st­ein and Palais Schwarzenberg and soon orders for both palaces invited a wider range of furniture eg stools, tables and cabinets.

With unemployment after the 1848 Revolution, many workers were available for the new Thonet factories, steam engines were put into op­er­ation and the first export orders were received. He succeeded in 1859 with Chair #14 bent from solid wood.

After Michael died in 1871, the Gebrüder Thonet Co. stayed with Michael Thonet’s sons who kept the business in Vienna. The brothers always understood the need to integrate new move­ments and technological developments into their work. They presented their designs at the trade exhibitions, and translated catalogues of Gebrüder Thonet for ex­ports. Sales offices in many coun­t­ries opened. 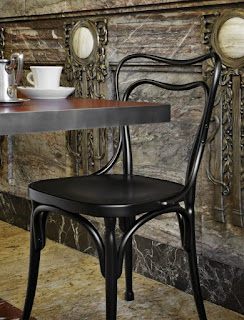 The Vienna Secession (1897-1905) was created as a reaction to the conservatism of the artistic institutions in the Austrian capital. By 1900 Thonet’s light and elegant manufacturing greatly appealed to the Viennese designers. The Brothers joined Jacob and Josef Kohn Co to become the leading manufacturers of bentwood furniture. And produced to the designs of Josef Hoffmann, Otto Wagner, Otto Prutscher, Marcel Kammerer and Gustav Siegel.

On Hof­f­mann’s recommendation, Gustav Siegal was hired to head the design depart­ment of Jacob and Josef Kohn whose works were first acclaimed at the 1900 Exposition Universelle held in Paris. In 1901 Jacob & Josef Kohn displayed an ent­ire house of bent­wood furniture at an Austrian Museum for Art and Industry exhibition.

Vienna had become Europe's 4th-largest city after London, Paris and Berlin. But at the turn of the century many families were still using a style that belonged to the aristocratic courtly society. As soon as there was an emerging, strong bourge­oisie in Vienna, they needed their own aesthetic expression. There were new social, econ­omic and technical developments. So the Vienna Seces­s­ion artists joined for­ces against the conservative in­stit­utions. Despite not lasting for too long, the Vienna Secession Movement was infl­uent­ial. Their des­ig­ns were eventually mass-produced, both in Austria and Germany, launched by the Seces­s­ion artists. My favourite archit­ects of the Secess­ion, Josef Hoffmann, Adolf Loos, Otto Wagner and Marc­el Kammerer, dis­cov­ered the design pos­s­ibilities of bent wood furniture in turn-of-the-century architect­ure.

Both Hoffman and Loos wanted to break with Victorian tradition and borrowed heavily from other traditions, Classical sources for Hoff­man and Japanese minimalism for Loos! The Vienna Workshop's mission was to give the individual a voice. In fact the Secess­ion­ists’ 6th Exhibition, in 1900, was dedicated to Japanese exhibition, the flat surface decor being a running theme throughout.

Adolf Loos disliked the elitism that came to be assoc­iated with Vienna Secession work. The furniture he designed was unpretentious and functional, showing his und­er­standing of materials and of form. So I care that Loos used Thonet bent­wood chairs in sev­eral of his comm­is­sions. His 1901 bench was made of stained beechwood. 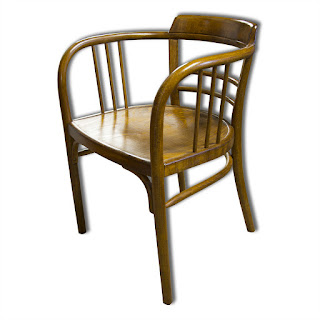 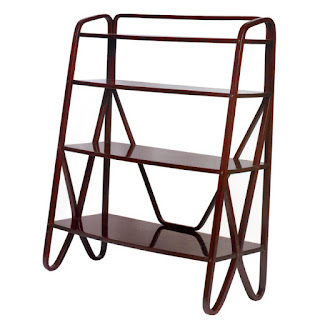 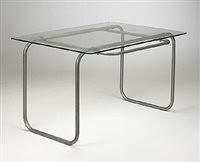 But deaths and unem­ploy­ment left families struggling during and after The Great War; and the crisis of bourgeois ideals brought demands for change. For Bauhaus era architects, Gebrüder Thonet represented the ideal of con­temporary seating furniture. However another material, sim­ilar to bentwood in its simp­lic­ity, came into high demand among architects. The revol­ut­ion­ary invention of cold-bent tubular steel furn­it­ure marked a new era in design history. In the 1930s the Com­p­any saw design­s by my Bauhaus favourites: Mart Stam, Ludwig Mies van der Rohe and Marcel Breuer.

Many thanks to the Thillmann Collection.

Simple and elegant....now let's work on the comfort.

I can imagine that, even though traditional taste makers were not well pleased with Thonet, the Company had lots of admirers. Brilliant move to influence Viennese coffee culture with Thonet style, as in the Griensteidl painting

Hello Hels, I want that bentwood étagère! I'll have to start shopping for things to put on it.

It's funny, we were just talking about designs produced over a long period, and here is the perfect example.

In America, we had bentwood furniture also--the most famous was the Belter furniture, which went to the other extreme--heavy and ornate, and made from dark but high quality woods, usually rosewood. Incidentally, the V&A in London has the most elaborate Belter suite I have seen--so over the top, it is almost frightening. However, in moderation and in the rooms built for it, Belter evokes its period as well as Thonet chairs evoke coffee houses.
--Jim

mid Victorian furniture was typically bulky, dark and heavily ornamented. So in comparison Thonet looked very light, cheaper to construct and with no added ornamentation bulking up the room. Strangely enough, I cannot find any comments about comfort :)

Hi Hels - I'd never heard of Thonet or his furniture ... knew about bentwood and we had some chairs at home ... but am sure they were English ones. Fascinating history - and wonderful the firm is still going and the family are still involved. It's beautifully elegant and simple ... cheers Hilary

Thonet furniture was cheaper to make, and therefore available to a wider range of families, because the steam bending technology was much less labour intensive than more traditional skills. Labourers could also assemble the pieces easily for transportation, unlike in other businesses.

No wonder the coffee places in Vienna were delighted to take in Thonet bentwood chairs by the thousands, to look very smart and modern in the late 19th century. That painting is very telling, yes.

Even though Thonet perfected their packing and shipping services, other countries were keen to develop their own bentwood styles. It is interesting that the Belter furniture you described was heavy, ornate, and made from dark woods like rosewood - the opposite of what Thonet was aiming for.

Re evocation of a special era. I saw a dress today and said to the others "how perfectly that dress evokes 1968. I loved it then and I love it now".

there were businesses in the UK, both before and after Michael Thonet in Austria, who made bentwood chairs etc. For example have a look at a set of 1825 chairs, made in the Wycombe area of Buckinghamshire from oak and elm.

Your family had good taste :)

See the Thonet chairs in Henri de Toulouse-Lautrec's painting, At the Moulin Rouge [1892].

Hi again, Thanks for looking up the auction--some interesting pieces there! $5-7,000 might seem a little high for the average budget for one shelf, but pieces like this are what would make a house into something extraordinary. Since I don't have a permanent house or apartment, I concentrated on smaller items that are easy to move and store, but a piece like the Thonet shelf would be a major focal point. And since I still have time to look around, I might be able to snag a bargain!
--Jim

I did not know of this history. The chairs look elegant but not entirely sturdy.

when I was working full time, I really enjoyed going to auction houses to 1] examine the objects and do my research and 2] turn up to the auction itself, sometimes to bid.

Unless you are a very wealthy collector, it really does seem smart to concentrate on smaller objects. But even then, I was passionate about late 17th and early 18th century silver art objects.. and eventually couldn't afford them either :(

Michael Thonet's big success came when he found that steaming wood within a metal brace meant that solid wood held its shape when cooled. The resin would hold whatever curve was required. So while if a teenager jumped on a chair to play football, it would have broken, the new designs were surprisingly sturdy.

I saw some wonderful Thonet furniture at the Royal Furniture stores in Vienna . Such a great museum fro anyone interested in Furniture .

The Imperial Furniture Collection in Vienna shows a LOT of great furniture. From Biedermeier, Baroque, Thonet brothers to Vienna Modernism, and everything in between. I agree with you ... well worth seeing.

Now I need to add something that I still find a bit embarrassing. Until studying Art History at Melbourne Uni about 120 years ago, I thought "visual arts" meant paintings, architecture and sculpture. The idea that furniture, stained glass, metalwork, mosaics, textiles etc could be art never occurred to me.

Hey,
This is exactly what i was looking for. Thank you for sharing. It will be really helpful for me :)