Prompted by the Fifty Shades of Fire exhibit of redheads in Israel, I was very interested in fathers, sons and grandsons looking like each other and sharing behavioural tendencies. These are the photos I put on my desk next to each other, with my son in the left, husband in the centre and grandson on the right. All are redheads with white skin, blond eye brows & lashes, a passion for science & maths, and a love of camping, hiking and riding in non-English speaking countries. 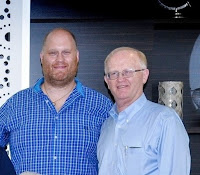 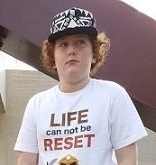 Underneath these two photos, unbelievably, was a journal article called "Another Chip off the Old Block" (BBC History Magazine) dealing with the similarities between King Henry VIII and his only son Edward. Henry and his divorced wife Cather­ine of Aragon had a daughter Mary who was born in Pal­ace of Placentia Greenwich. El­iz­abeth, daughter of Anne Bol­eyn, was only 3 when her father had her mother be­head­ed, and she had a miserable childhood. For 25+ years the King had desperately wanted a son, to avoid civil war after his death. So he quick­ly marr­ied Jane Seymour.

Ed­ward’s formal royal household was under the control of Sir Will­iam Sidney, and later Sir Rich­ard Page, step­-father of Edward Seymour's wife. King Hen­ry demanded exacting standards of security and cleanliness in Edward's house­hold; plus the boy was lavishly provided with toys and fun.

From 1538 King Henry took two wives in quick suc­c­ession. Sadly Anne of Cleves was discarded because the King found her ugly, and Cath­erine Howard was executed for adultery. In 1543 Henry married Cath­erine Parr, who became a loving, educated stepmother to Edward, Mary and Eliz­abeth. 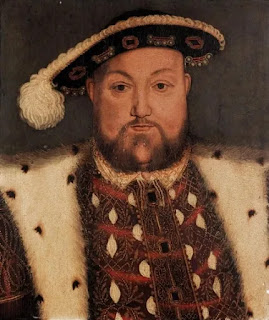 Although Edward was studious, he looked like his father and displayed a savage temp­er, just like his father had done for years. The Archbishop of Canterbury reported that in front of his tutors, the young King tore a living falcon into pieces in a fit of anger.

When Henry died in 1547, the 9-year-old prince became King Edward VI, with his good and bad tempers now ruling the entire nation. A Council had been appointed by his father to rule during his min­ority. But Edward's uncle, Edward Seymour Lord Hertford (Jane Seym­our's brother), wanted to be Protector of the country. In Feb 1547 Lord Hertford was created Duke of Somerset and Earl Marshall. And he became Master of the Horse, Knight of the Garter and a steward of royal prop­erty in the West.

The Duke of Somerset's brother, Lord High Admiral Thomas Seymour, was jealous of Somerset and schemed to put himself in power. But Thomas Seymour had played Edward VI for a fool, counting on him being the favoured uncle. Instead young King Edward was showing signs of becoming independent and more self-reliant! 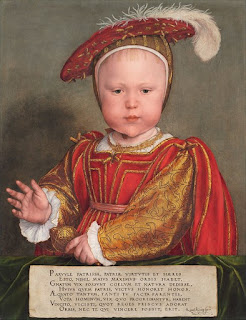 The Admiral was arrested and charged with treason. The Duke of Somerset hesit­ated to sign his brother's death warrant, so Edward gave the coun­cil permission to have his uncle beheaded.

Somerset himself later fell from the king's favour and lost his role as Protector. John Dudley, Earl of Warwick and Duke of Northumb­er­land, took control of the King and council, and eventually Somerset was also arrested for treason. Under pressure from Dudley, 14-year-old Edward signed Som­erset's death warrant; he was executed in 1552. Never mind! Edward VI uncles' deaths was just Royal Business As Usual. Like father, like son!

If he had lived longer, Edward may have persecuted non-conformists with increasing severity – perhaps more than Mary did.

Richard Cox and Sir John Cheke became Edward’s tut­ors, teaching languages and history. His his­tory’s lessons had to be put into practice; so the lad took notes on English rule in France during Henry VI's reign. Edward stud­ied geog­raphy, learning all the ports and havens in England, France and Scotland, and the favourable tides for entering them. A king needed strategic inform­at­ion! He learnt the names and rel­ig­ion of every magistrate, the better to govern.

On the issue of religion, Edward had all the passion of a zealot. And he learned the scriptures well. The king's youthful passion was to hear sermons and notes, especially when the preachers discussed the duties of kings. Here was a prince who prepared himself with great discip­line for what he saw as his divine obligation.

Look at the impact King Edward had on noble families. Henry Herbert's wife, Anne Parr, was a sister of the Cather­ine Parr who married King Henry VIII. He rose with the Parrs after the royal marriage and was knighted in 1544. He had been granted Wilton Abbey and other land by King Henry after the Dissol­ution, and built the first Wilton House in the 1540s. On the king’s death, William Herbert was made an executor of the king's will and a guardian of young King Edward VI. As a reward for loyalty, in 1551 Edward VI raised Her­bert to the 1st Earl of Pembroke.

Woburn was another medieval abbey that had been cl­osed down in 1538 by King Henry VIII. Hen­­ry kept much of the land and gave the rest to his loyal supporters at court. King Hen­ry ennobled the Russell fam­ily and gave them Wo­b­urn; King Edward rai­s­­ed them fur­th­er to the Earldom of Bedford.

By this time, Edward had completed his education and was particip­at­ing in council meetings. When it was decided that the King would take charge of the country at age 16, his ardently Catholic half-sister Mary refused to cooperate with Edward's religious reforms. Edward was in any case closer to Elizabeth (only four years his senior) than to Mary.

Edward contracted smallpox in Apr 1552, and his health soon spiralled downwards from TB. King Henry’s will had specified that Mary should become Queen, if Ed­ward died without children. But the Duke of North­umberland persuad­ed Ed­ward to name Protestant Jane Grey as his successor. Lady Jane was the grand­daughter of Henry VIII's sister Mary; she was also Northumb­erland's daughter-in-law! In Jul 1553 Edward died, at 15. Mary took the throne and married Catholic King Philip II of Sp­ain.

Why have a monarchy? Henry neither gave moral leadership nor unity. His son might have gone the same way.

It is great when sons look like their fathers. Otherwise who would know who their real dad was ha ha

I think the entire nation would have agreed with you before and after the Civil War. But it wasn't until William and Mary that the royals were finally recognised as subordinate to Parliament. The constitutional monarchy no longer ruled by divine right but by social contract... thankfully.

The English Bill of Rights was a Parliamentary act that was passed in 1689. But perhaps we need to revisit the entire concept of monarchy now!

DNA companies say that, on average, 25% of children asking for ancestor-tests turn out to be not the children of their putative fathers. If that is true, or nearly true, you are quite right.

I would not like dna tests in my family as I know what some of the results would be, similar to the 'faithful life partners' swans in Albert Park Lake.

that is true for most families, yes. Who knew what happened only one generation ago, let alone longer ago than that.

Not that I would ever have asked them, but my dad was in the Army during 1944 and 1945, and my grandpa was in the Army in 1916-18. How do I know that I don't have half siblings in New Guinea (dad) and half grand-siblings France, Egypt and Israel (grandpa)?

Hmmmm...I wonder why Kim Jong-un comes to my mind when reading about Edward. It must be the avunculicide. I can't believe that anyone would want to be in the Royal household at that time. The chances of a natural death seem to have been quite remote.
CLICK HERE for Bazza’s deliberately devastating Blog ‘To Discover Ice’

I would not have wanted to be in the royal household then either... or in a noble family.. or in a Catholic family.

But I would not want to be in certain countries now :( President Rodrigo Duterte has ordered extrajudicial killings as part of his war on drugs in the Philippines. Since Duterte became president in 2016, the ICC found 8,000 extrajudicially murdered civilians, with civil rights groups estimating up to 12,000.

Hello Hels, I hope that your family in resembling each other is friendlier the Henry VIII's. I once saw a documentary on him which suggests that some of his more strange and violent behaviors were the result of injuries. However, that doesn't explain the son's temper--probably a combination of royal privilege and the colossal spoiling that must have occurred after Henry "worked" so hard for a son.
--Jim

I am now wondering whether Henry VIII's injuries really did change his personality, considering his son had such a bad temper. Many royals are spoiled and privileged so I am not sure whether that is enough to explain it.

Modelling himself on dad was probably a good idea for Edward since Henry was hugely successful. But at 15 he contracted TB, small pox and/or fever and died. Edward might have also been a powerful, Protestant ruler, had he reached adulthood.

But what about a young son who did NOT model himself on his royal father? Kaiser Wilhelm II of Germany loathed his father Kaiser Frederick III, thinking him hopelessly weak and liberal, and his mother Princess Victoria too British. Wilhelm couldn't wait till his father died, so he could change Germany forever into the nation he wanted. He did :(

right. Even though the doctors had no idea what was the matter with Henry after his sporting injuries, they saw the changes in his body and his mind. Sociopathic behaviour, paranoia, loss of memory, no impulse control, inability to walk and a weight gain to 28 stone!!

But imagine if his doctors, ministers or wives had suggested he give up the throne while he recovered. They would have been hanged, drawn and quartered :(

Such and informative post regarding art and architecture, It will be very useful for everyone. Thank you for sharing this post.

my pleasure. Are you particularly interested in the Tudor era in history?