Which nation owns falafel as its national dish?

The first part of his post comes from Alexander Lee. The second part reflects my own experiences.

Falafel is an archetypical Middle Eastern dish. Made from ground fava beans, chickpeas or both, these deep-fried balls are a staple of Levantine cuisine. Whether eaten alone as a quick snack, or served in a pitta with salad and tachina-based sauces, they are a common sight across the Levant.

Falafel is as contested as the region itself. While Israelis have fêted it as their national dish, Palestin­ians see it as the theft of their distinctly Arab special­ity. Clearly own­er­ship of this most dist­inctively Levantine dish was bound up with issues of national identity between the two nations. 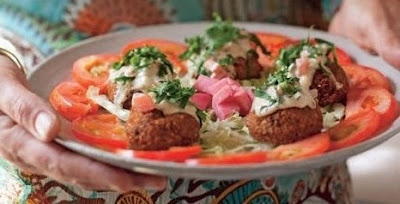 Meanwhile the Lebanese want falafel recognised as their own; and the Yemenis say it is they who invented it. This is not just a matter of cul­in­ary pride. Mostly arguments about the origins of falafel are refracted through the lens of political rival­ries.

Despite all the claims, falafel was almost certainly developed in early modern Egypt. There are no references to any­thing resembling falafel in pharaonic texts; in any case, the vege­table oil in which falafel was fried was then very expensive. Nor was falafel invented by Coptic Christians as meat-free food for Lent.

Falafel is modern, appearing in Egyp­t­ian lit­er­ature only after British rule (1882). Pro­bably this was bec­ause British officers from India may have asked their Egyptian cooks to prepare the Indian cuisine using local ingredients.

Falafel probably emerged in Alexandria, the country’s prin­c­ipal port and home to the largest concentration of British and European troops. At first, its principal ing­red­ient was fava beans, which were grown in large quantities nearby and which became an Egyptian staple under the Muhammad Ali dynasty. From Alexandria, falafel spread across the country, then migrated.

Shortly after WW1, it had reached what is now Lebanon and, in 1933, falafel shops opened in Beirut. Soon falafel travelled down the Red Sea coast towards Yemen, north along the Mediter­ranean to Turkey and west towards Libya. Each nation general­ly left the basic recipe unchanged, slightly altering the ing­red­ients to suit their own tastes or to reflect the balance of local agriculture.

Falafel also reached the Jewish communities in Palestine and the Jewish pioneers adopted it readily. Having long grown used to cultural exch­an­ge with Muslim neighbours, they gave no thought to whether it was an Arab food or not. They simply integrated it into their own cuisine. It was tasty and filling, and the ingredients could be bought cheaply. Falafel balls were convenient to eat, served either hot or cold.

The Jews who came to Palestine from Eastern Europe, especially during the 1920s and 30s immigration-waves, were more hostile. Susp­icious of anything they regarded as Arabic, these Ashken­azi Jews stuck dogged­ly to their own cuisine, finding falafel alien food.

Independence for Israel came in 1948. Though recipes extol­ling its nutritious qualities appeared in news­papers, falafel’s popularity was patchy. Two developments changed that:

1] the introduction of rationing. Struggling to cope with the influx of new immigrants, and lacking both food and money, Israel introduced a strict programme of food rationing in 1949. Not only was falafel a good substitute source of protein, but cheap enough for even the poorest families.

2] The second was the arrival of MANY Sephardi Jews from Ye­men, Turkey and North Africa. In 1949, 100,690 Sephardim arr­ived in Israel from these regions, 41% of all immig­rants in that year! Having already loved falafel in their nat­ive count­ries, they happily brought it with them to their new home and cooked it regularly.

In the wake of the Arab-Israeli War of 1948-9, there was a concerted effort by the Israeli government to foster a dist­inctive sense of Israeli national identity and to separate its culture from that of its neighbours. Helped by the fact that many Yemeni Jews soon started opening falafel stalls, the Israeli government incorrectly promoted the idea that falafel had been imported not from Egypt but from Yemen.

By the 1960s, this nationalisation process was complete. Fal­afel had been identified as the Israeli dish par excellence. It was proudly served on long-haul flights by Is­rael’s nat­ion­al carrier El Al; and top chefs prepared special dishes in international cookery compet­itions. 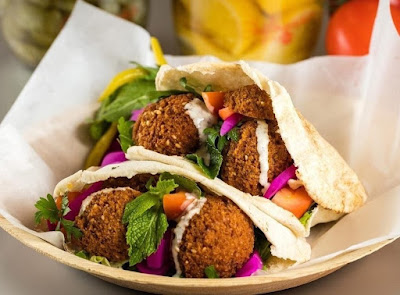 By then falafel had begun to reach more distant shores. Waves of Arab and Turkish migrants in the early 1970s had taken it through Europe, especially Germany. Even in the USA in the late C20th, falafel began to be appreciated by a much wider audience.

In my parents’ home, I had never been to a Sephardi synagogue or heard of Sephardi cuisine. Presumably this was because almost the entire Jewish community in Melbourne before and soon after WW2 were from Poland, Russia, Germany or Hungary.

Then I joined a pioneering youth movement in 1963 where the focus was on scouting skills, working the land and Hebrew language. All the movement’s parties celebrated with platters of falafel, chumus, techina, pitta bread and pickled vegetables. Finger food!

Going to Israel the first time, for a Gap Year in 1966, the food in the academy was cheap, fattening and filling, but not very healthy. So although falafel was still not traditional enough for me to love it, some of the other Ashkenazi students from abroad readily adapted.

Then both of my Ashkenazi sons married beautiful Sephardi wiv­es (one family from Alexandria and one family from Damas­cus) and their diets changed. One son eats falafel and chumus as an entrée before every dinner. The other son has it on the table, with a range of other entrées, every single Sabbath and Holyday dinner.

Hello Hels, This is the kind of Middle-East history that is enjoyable to read about! I have not found falafel in Taiwan, but it is readily available in Cleveland, where we always seems to have a favorite "falafel place." Lately, there is even a chain, Aladdin's, which produces pretty good falafel, and is getting popular--I think it is a franchise. I like falafel, but not too often, because I gave up most fried food a long time ago. Those pickled turnips, however, I can eat forever.
--Jim

My grandparents were Lithuanian and never ate exotic or spicy foods like falafel. Neither did my parents.

Imagine an imported food product being so popular in modern USA that a chain takes it on. I have never had a Makkers or Kentucky Fried in my life, but I would certainly try Aladdin's.

I am glad you mentioned grandparents.

A present for dad.
Even mum buys it here.
For old grandma, we'll buy half a portion
For this is the national dish of Israel.
With lots and lots of peppers.

And yes I know about Lithuanian tastes :)

I believe you are correct about the Egyptian origin. According to Claudia Roden, that definitive Middle Eastern cook who grew up in Alexandria, it was a Christian dish created to be eaten as a meat substitute during Lent. 🙂

My son's in laws lived in Alexandria, living as traders between Egypt, Italy and Greece. They absolutely loved their city, the culture, languages, homes and every other thing. I totally believe that because Alexandria was the country’s prin­c­ipal port and home to the most sophisticated traders/travellers in the middle east, it was most likely home of these special foods.

Cornish pasties have been given protected status by the European Commission. Cornish pasties from anywhere other than Cornwall will now have to find another name for their product.

Ditto it is illegal to label as champagne anything that was not grown and made in the French province of Champagne.

In London there is a small chain of restaurants called PilPel (Hebrew for pepper) who serve the most delicious falafel. At the one in Spitalfields market (now a very trendy spot) they usual have a member of staff outside with a tray of free falafel which are irresistible. I don't know where they come from but I know where they're going! www.pilpel.co.uk
CLICK HERE for Bazza’s coyly contumacious Blog ‘To Discover Ice’

I spent a great deal of time walking all around Whitechapel in the early 1970s, locating one of my grandparents' house, school and Yiddish theatre where she performed. But there are parts of the East End that I did not know, and other parts that have probably changed hugely in the last 45 years. Spitalfields Market, if it is very trendy now, would be a great spot for a small chain of specialist restaurants.

Hi Hels - fascinating to read about the origins of falafel ... I've always loved Mediterranean foods ... so am pleased to read about Bazza's suggestion - one day perhaps I'll get there and try his restaurant. Food history is always so interesting - as too your background and now your sons - a happy read - cheers Hilary

I always assumed that families cooked the same foods their mothers and grandmothers cooked, and that it was always thus. But the more history blogs we read, the more obvious that food was as important a cultural object as fashion, sport, language, music, jewellery etc. Perhaps food was underestimated because it was seen as "women's work", as opposed to "professional" restaurants and stately homes.