Bobby Shafran drove to Sullivan County Community College in New York for his first day of university. The other students were thrilled to see him there, telling him how their summer holidays had been and asking newcomer about his. He was particularly surprised when girls warmly kissed him, and called him Eddy.

Soon Michael Domnitz, whose best friend Eddy Galland had just changed colleges, solved the mystery. Domnitz asked Bobby if he was adopted, and if so, what was his date of birth. It was 12th July 1961, the same date as Galland! Shafran phoned Galland, and they immediately arranged a meeting. Both Bobby and Eddy were gobsmacked that their two faces, clothes and hairdos were utterly identical!

The story of the twins’ reunion made the local news­papers. And an even more striking event occurred. David Kellman, a 19-year-old student at another New York college, saw the twins’ faces in a newspaper and thought he was looking at himself. They turned out to be identical triplets.

All three boys had been taken from their young biological mother at birth, split up by the Louise Wise Jewish Adoption Service and adopted by three different families in the suburbs of New York. All Jewish, yes, but totally different socioeconomic backgrounds. 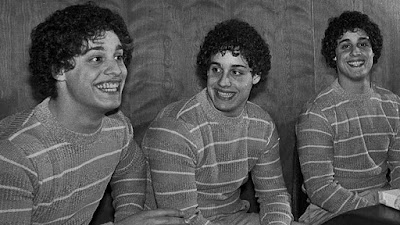 The three triplets
after they accidentally got together in 1980

Despite Louise Wise Service saying that adopting triplets together would be impossible, none of the adoptive parents had ever been asked if they would take more than one child. In fact the psychol­ogists specifically split up identical twins and triplets, placing them in different home environments, in order to study their lives.

When the triplets were accidentally reunited at 19 years of age, the boys did not know was that they had been the subjects of a long-term study aimed at finally answering the Nature Vs Nurture question. Partially funded by the government, the relevant grant application was called A Longitudinal Study on Monozygotic Twins Reared Apart. A psychologist and photographer began visiting their homes (and the homes of other identical twins). The visits took place every few months, and went on till the boys were 13. Very detail written records were kept and filed.

They gave many tv interviews in the 1980s, but the scholarly research was never analysed or published. And it wasn’t till 2018 that a documentary about the triplets was released: Three Identical Strangers, directed by Tim Wardle.

Being a psychology graduate in the 1960s when rigorous experimentation was valued, regardless of the ethics, I was fascin­at­ed by this documentary. For example, the boys asked if it was moral to separate twins and triplets at birth, allowing the “research subjects” to grow up alone? How could the adoption serv­ice not ask the adopting parents if they wanted to keep the babies together? Why was the research not published and the results made accessible to the participants? Were the triplets delighted to find each other at 19? Were the three lots of adoptive parents delighted when the triplets found each other? When the triplets started going to the same college, got degrees in int­ernational marketing and worked in the same restaurant, were they successful? When work press­ures led to fights, did the three men remain close to each other? Did the three marry happily and have babies? 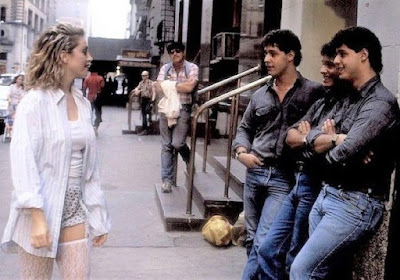 The triplets were given bit roles in the film

It was very clear was that Kellman’s father, a grocery-shop owner, was a wonderful man who became the mega-father to all three young men.

But some questions were totally inappropriate. Was their biological mother mentally unstable herself? Were the children therefore susceptible to mental illness in their own lives? And if all three men had had disturbed childhoods and really tough adolescent years, how much was contributed by the secret adoption process?

Eddy had exhibited increasing signs of bipolar disorder (which we didn’t hear about in the film). So in 1995, when the brothers were torn apart again, the audience was in tears. Eddy Galland suicided in his New Jersey home, leaving behind a wife and a young child. The triplets, then aged 34, had spent less than 15 years of their lives together.

After Eddy’s suicide, the lead psychoanalyst Dr Peter Neubauer, who designed and managed the study, could have added to the debate. But he did not. He merely said the trip­lets would have been separated anyway, because it was the policy of Louise Wise Services, so he decided it gave the psychologists a great chance for research. Nor did Neubauer explain why the research had never been published. I was bitterly disappointed.

When Dr Neubauer died in 2008, all of his records were placed with Yale University and sealed till 2065!! So the documentary didn’t and couldn’t plumb the depths of the scientists’ deception.

As the Louise Wise Service closed a long time ago, The Jewish Board of Family and Children’s Services would now be responsible for sharing the research findings. And since then, some heavily re­dact­ed pages were indeed copied and sent to the surviving triplets. And the scientists apparently invited anyone who was an identical twin, who knew they were separated at birth in New York and secretly studied, to come and ask them for the records.

The film noted that there were psychiatrists alive and working in New York who worked on this study and could tell us more, but the director only found two almost irrelevant scientists who agreed to appear in the film. For whatever reason, there were really powerful people in New York who didn’t want these events to be aired.

I do not want to discuss Josef Mengele, who experimented on twins during the Holocaust. But the triplets did refer to other unethical studies in the USA: the Tuskegee Syphilis Experiment in The Negro Male (1936-46); the Milgram Exper­iments on obedience to authority (early 1960s); and the Stanford Prison Experim­ent on perceived power (1971).

Hi Hels - how extraordinary and unsettling ... thanks for letting us know about the film, and lack of ending - ie the sealing of documents to 2065 - which seems extraordinarily unnecessary in the circumstances. Cheers Hilary

I wonder if scientists would ever pull siblings apart today, let alone twins and triplets? In any case, those researchers could have opened the files to the victims on their 18th birthdays.

While we don't have a right to know, it would be quite fascinating to know more. I think authority now does at least understand the bond between twins and triplets and separation would not happen...I hope. Interesting one Hels.

Hello Hels, Today the sequel to this film would be called Three Identical Lawsuits, which probably explains "really powerful people in New York who didn’t want these events to be aired," (which sounds like conspiracy theory, anyway). Back then, there were prevailing standards about the secrecy of adoptions and separation of twins, and today people still have to be careful about respecting then-current standards and agreements.

The book Belles on their Toes is the sequel to Cheaper by the Dozen, about the real-life Gilbreth family. After the father died, there was real pressure to split up the large family, resisted successfully by the mother Lillian (who incidentally was later put on a U.S. stamp, although to recognize her professional achievements). However, in this case, had they been split up, their lives would probably not have been kept secret from each other.
--Jim

Edward Galland, David Kellman and Robert Shafran were born in 1961. By 2065, the officials were ensuring that the doctors, welfare officers, researchers, natural and adoptive parents and the triplets themselves would be long dead. That is so absurd... I can't believe it.

In March 2018 there was plenty of information about Louise Wise Adoption Service in New York but I hadn't seen the film back then and didn't understand the ongoing significance of the articles.
eg https://www.news.com.au/lifestyle/real-life/news-life/twins-demand-answers-after-being-separated-in-sick-psychological-study/news-story/ccae7aa0489cc7129cb73404cd6b6a28.

The files are in a safe place and are now available, but as so redacted, adoptees are still not finding the information they need about their biological families and the decisions made at adoption. Could it happen again? Is there any legislation re the adoption of siblings?

My father was adopted at 17 by his maternal aunt, in 1939. The adoption was organised cooperatively between the two sisters, he lived near his biological parents and he went to the same school as his 5 siblings. Yet he didn't get a copy of the court case and the adoption reports for MANY decades after 1939. I think even the families involved in adoption will rarely know the true stories about their own histories.

I worked in a clinic for many years and found the "abort/keep/adopt decision" was always a very difficult one. I felt sorriest for women who were pregnant by rape or incest, but we can also imagine huge families (like your Gilbreth example) with 10-12-14 children and suddenly the one income-earner was dead.

Re lawyers, threatened suits and actual court cases, I can imagine a lot of professionals realised (at the time or later on) that they had acted badly. Adoptive agencies, natural parents, adoptive parents and adopted children would most likely have felt VERY conned.

I am assuming that the study title, Longitudinal Study on Monozygotic Twins Reared Apart, means the researchers were looking for the influences operating on the children. IF the birth mother was considered mentally unstable, and IF nature had nearly as much influence as nurture, then the researchers were morally bound to protect Eddy.

Apparently the researchers retained their silence :(

The families of the three boys descended on the offices of Louise Wise Services to demand information about the placements of the boys and the scientists who had been studying them for years. This scene shows how the film is a story about power: the power of social service agencies to create, and destroy, families, as well as the power of the scientific establishment to turn human beings into subjects.

Thank you. I worked in psychology for 20 years and worked very hard to protect families, not destroy them. The film was indeed about power, or should I say the abuse of power.