Marco Polo and his travels over the Silk Roads

The Silk Road was a trade route for precious silk, but not only silk. It became an East-West network of inter-­con­necting routes linking Central Asian Kingdoms (eg Bukhara, Samarkand, Bishkek and Islamabad) in the west with major China cit­ies; especially the Han and Tang dynasty capital, Changan (modern day Xian) in the east.

It was rare for individual traders to cover the whole length of the Silk Road. When each trader arrived at his region’s limit, he sold the goods ac­ross his border. Thus as the goods moved westwards from China, Chinese traders would sell to Central Asians, then to Pers­ians, to Syrians, to the Greeks and Jews, and finally to the Italians. 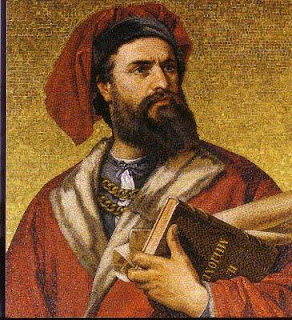 The volume of goods traded along the Silk Road increased during the Tang dynasty (618-907), in both directions. The Chin­ese imported gold, gems, per­­fumes, dyes, textiles, ivory and glass, and exported furs, ceram­ics, spices, jade, silk, bronze and lacquer art pieces, iron. The world modern­ised as the result of the increased trade and communication. In the later C13th, under Kublai Khan’s rule, China’s silk industry reached a great soph­is­ticat­ion and guild-regulation and China’s cities became thriving commercial centres.

East-West economic exchanges required big ware­houses in the trading cities, linked by camel caravans. Businessmen travelling along the road usually spoke Chinese, Persian, Turkish or Arabic, depending on which cities they con­ducted their business in. The men slept in caravanserais/roadside inns where their camels were rested and fed, and the goods kept in secure lockups.

Two noble brothers Nicc­olo (1230–c1294) and Maffeo (1231–c1309) Polo had established a trading outpost in Venice. In 1260 these two mer­chants arrived in the Crimea, trading near the Volga river for a year. But then they were caught up in a local civil war, and needed to move, ending up staying for 3 years in Bukhara. The maroon­ed Polo broth­ers were rescued by the Mongol ambass­ador, then left Buk­hara via Samarkand, Kash­gar, travelled around the Gobi desert via Tur­fan and Hami, to Dun­huang. And ended up in Bejing, the new capital of the Great Khan in 1266.

The Silk Road Foundation says that Kublai Khan was very hospitable. He had set up his court at beautiful Beij­ing, after the Mongols took over China in 1264 and estab­lished Yuan dyn­asty (1264-1368). Nicc­olo and Matteo, who spoke some Turkic dial­­ects in the Stans, were well rec­eived in the Great Khan's capital.

Marco Polo (1254–1324) grew up in Venice. He only 6 when his mother died, and his father and uncle set out eastward on their first trip to Cathay/China. Meanwhile Marco was becoming well educated, in theology and languages. 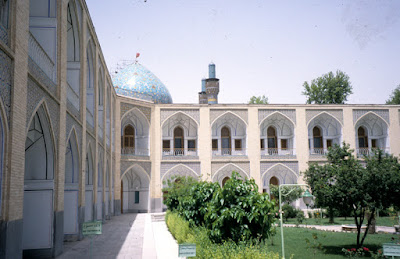 In 1271, the Polos once more set out from Ven­ice... and they took 17-year-old Marco with them. This time the Polos’ caravan trav­elled to the western shores of the Caspian Sea, reaching Tabriz and making their way south to the Persian Gulf. They intended to take sea route to the Chin­ese port but, finding the ships too flimsy, they decided to go overland to Cath­ay.

The Great Khan knew they were coming, sending out a royal escort to bring the travel­lers to court. In May 1275 the Polos arrived at the Khan’s summer residence in his capital, Beijing, 3.5 years after leaving Venice.

In Cathay, Marco had many conversat­ions with Kublai and learned a great deal about Mongolia. He spoke 4 lang­uages well, became a fav­ourite with the Khan and was appointed to high posts in his admin­istrat­ion in China, Burma and India. Marco wrote at length des­cribing the capital, hunting,  ceremonies and public assist­ance. The summer palace’s walls were covered with gold and silver, he said; the Hall could feed 6,000 people and the stables had 10,000 perfect white horses.

China under the Mongol Empire dynasty was a huge empire whose internal economy dwarfed that of Europe. Iron manufacture was much bigger than Europe, as was salt production. A canal-based transport Asystem linked China's huge cities and markets had well developed paper money.

Kublai Khan appointed Marco as an official of the Privy Council in 1277 and for 3 years he was a tax inspector in Yanzhou. Meanwhile his father and uncle took part in a military campaign, designed and constructed siege eng­in­es.

The Polos stayed in Khan's court for 17 years, acquiring great wealth in jewels/gold. And they travelled to Hangzhou, a city with beautiful lakes and many canals, like Venice. Eventually they were anxious to get going since they feared that if elderly Kublai died, they might not be able to get their fortune out.

On the journey home, the sea journey took 2 years during which 600 passengers and crew died - scurvy, cholera or pirate attacks? This dreadful sea voyage passed through the South China Sea to Sumatra and the Indian Ocean, and finally docked at Hormuz. From the Black Sea coast the three men went by sea, via Constant­inople to Venice, arriving in 1295. 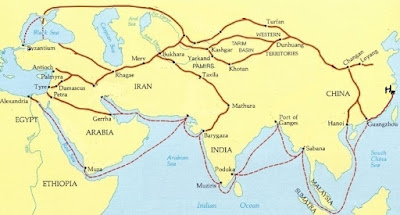 3 years after Marco returned to Venice, he commanded a galley in a war against the rival city of Genoa. He was captured during the fighting and spent a year in a Genoese prison, alongside a writer of romances, Rustichello of Pisa. Only when prompted by Rustichello did Marco Polo dictate his stories. His book was written in Old French, a language Polo did ­not speak.

Marco’s journey in Asia had lasted 24 years and reach­ed fur­th­er than any of his predecessors. His main interests seem to have been with the Mon­gol rul­ers of China and with the Muslim merchant comm­unity. Much of the book’s material can be verified against Chinese and Persian rec­ords, but some gave a fanciful pic­ture of life along the Silk Road. The book was translated into many Eur­opean language­es, in English as The Travels of Marco Polo. It became one of the most popular books in med­ieval Europe, with great imp­act on contemporary Eur­ope and on further exploration.

Anyhow in 1299 a peace was concluded between Venice and Genoa, and after a year of captivity, Marco was released freed and returned to Venice. He married, had children and remained in Venice until his death in 1324, aged 70. Even then, Marco still owned brocades of silk and gold!

Wife and I travelled along the silk route by train, but this time we will do far more reading first. The Silk Road Foundation has very helpful links, thank you.

I quite like the look of the 21 day trip from Beijing to Moscow. I have been on historically amazing, luxury train trips in Western China and in India, but never in Central Asia.

Reading widely before you travel is definitely the way to maximise your experiences.

His travels were extraordinary. Not only where he travelled but the slowness of them. He also visited Hanoi, it seems.

I don't understand how a young adolescent (when he started) coule be away for so long and travel so far, without being able originally to speak the languages and have the local knowledge he needed. Certainly Kublai Khan was very generous and supportive, but I am guessing that most of the time Marco was appointed to high posts in Burma, India, Mongolia and all across China without even the company of his father and uncle. Very brave young man!

I too read that Marco was a member of a Chinese delegation that went to Champa and possibly Vietnam after the unsuccessful war campaign of 1287-1288.

Hello Hels, I saw a special exhibit in Taiwan of the age of Kublai Khan, and they really pulled out all the stops with unbelievable paintings and those ceramics! I have to go back soon, and even reading the nightmare aspects of the Polos' trip doesn't much do much to abate my own trepidations for this ordeal, although the total trip time has been reduced to about thirty hours.
--Jim

Taiwan was the perfect place for a Kublai Khan exhibition. The National Palace Museum already had a vast permanent collection of pieces belonging to the old Chinese emperors, including Kublai's imperial portraits. I wish I had seen it.

Even as a child (long time ago!) I was captivated by the story of Marco Polo. It seemed so romantic and exotic and reading your article makes it seem no less so!
Similarly Kublai Khan (or Kubla according to Coleridge) had the same effect on me. I wonder if Marco Polo saw the "stately pleasure-dome"?
CLICK HERE for Bazza’s floccinaucinihilipilificatious Blog ‘To Discover Ice’

My husband did physics, chem, pure maths and applied maths for his matriculation in 1964, yet he still remembers Coleridge's first two paragraphs until this day. It must have been mesmerising poetry.

The "pleasure dome" was one of Kublai Khan's Mongolian palaces, so Marco Polo must have at least known about it.

Very interesting . I watched a bit of the Netflix drama about him and his travels but lost interest. Apparently there is one last living descendant who lives in Monaco . Isn't that great :)

I read all of The Travels of Marco Polo at university, but there were two main problems. His original work was written years later back in Italy, when memories might have faded or altered. And the book was written by another person, apparently at the dictation of Polo himself, leaving more space for changed memories.

Hi Hels - thanks for this excellent summation about Marco Polo and his travels ... it's an extraordinary true story ... all the embellishments or adornments et al add to the 'history' ... some no doubt added on - but still ... thanks for writing it up here - cheers Hilary

I was always passionate about the Silk Route at uni because it was so exotic, particularly when compared to our normal history (i.e European) courses.

Even better, the 3 members of the Polo family brought it all down to the human level, with specific dates and places that we could analyse.