The Museum of Manufactures and the Government School of Design were located in Marlborough House, an impressive Pall Mall residence. When a new home for this Museum (later Victoria & Albert) had to be found in South Kensington, they used the estate bought by the Commissioners for 1851’s Great Exhib­ition. The Museum was established in 1852 with 3 founding principles i.e to make works of art available to all; to educate working people; and to inspire British designers and manufacturers. All plans had to be approved by Prince Albert, including approval for Sir Henry Cole (1808–82) to become first V & A Director. The financial surplus from the Great Exhibition went to the V & A!

The South Kensington site architect was Captain Francis Fowke (1823-65), Inspector of Science and Art. Instead of Gothic architect­ure, Fowke proposed to focus on a North Italian Renaissance style, two storeys high, with a grand Lecture Theatre complex as centrepiece.

In 1861 designer Godfrey Sykes (1824-66) was invited to London by Henry Cole to as­sist with the horticult­ural gardens and arcades. The decorative schemes in the North and South Courts were mainly Sykes’ work, especially the choice of terracotta as the decorative medium.

In the showpiece Lecture Theatre building’s main feature was the red brick, terr­acotta and mos­aic-faced façade, three large recessed ar­ch­es and ter­r­acotta columns bearing fig­ures. Portraits of key mem­b­ers of the Mus­eum team, and names from the arts and sciences, appeared in the mosaic panels, lunettes and door panels. 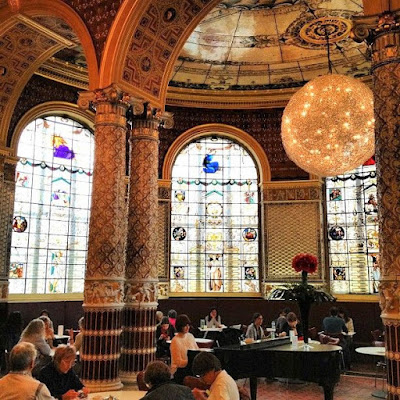 
The Gamble, Poynter/Grill & Morris/Green Rooms were to be the interlinked Museum’s restaurants. Although they were to be functional spaces, these restaurants would highlight the Museum's lavishly de­corated public face. Victorian designer Will­iam Morris had been Pre-Raphaelite friends with architect Philip Webb, Edward Burne-Jones and Dante Gabriel Rossetti in 1861, all partners in the int­er­ior decorating-furnishing business. Henry Cole was truly avant-garde in his determination that these three eating rooms should re­flect the simplicity of Morris Company's designs.

A] The walls and columns of the Gamble Room, influenced by Prince Albert's Frog­more Dairy of 1858–61, were faced with Minton majolica. The lofty and light room was opened in 1867, and The Building News in 1870 found the room bright and cheerful, like a richly adorned cafés of Paris. BHO noted that John Everett Millais (1829-96) selected the colours. But in 1874–5 the plaster ceiling was replaced by the Enam­elled Iron Company with one of sheet-iron enamelled in colours suggested by the metal ads on rail­way stations. Visitors ate at attractive tables.

Opposite the Museum’s main entrance, the Gamble Room was the vis­it­or's first view inside. The am­az­ing dec­or­ation was part of Cole's concept of a “museum restaurant as a way of getting people to enjoy culture”. The windows and frieze were full of Victorian sayings on the joys of eating and drinking. Ventilation grilles in the ceiling of the Gamble Room were sur­r­ounded by heavy en­amelled-iron railway-type plates. The ceramic tiled walls and columns were provided a hygienic, washable site for eating. 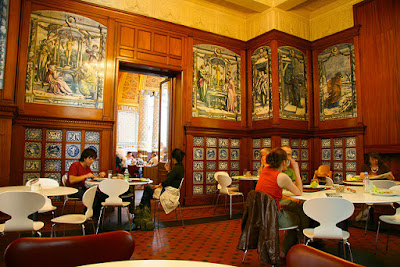 B] The smaller flanking rooms needed other decoration. Edward Poynter (1836-1919), so successful at the Royal Academy, was invited in Nov 1865 to tender for the decoration of the eastern restaurant, the Grill Room-Poynter Room. Designed by Poynter himself, the tile panels were painted in a tile-painting class for female students at the Schools of De­sign. For women to be engaged in so public a commission was very progressive. This radical spirit at South Kensington found popular expression in the altern­ative Arts and Crafts designs of the 1880-1910 era.

And he designed the windows and the iron-brass grill. The décor­at­ion of the meat grill, particularly in the app­lied brass, look­ed modern. The room was opened in 1867.

The Poynter Room was furnished with small iron tables with white marble tops. The catering contract­or offered a long breakfast menu, divided according to social stand­ing. The 1st class menu was elab­or­ate and expensive; the 2nd class menu was more limited and cheap­er. The 3rd class menu was only available to workmen at the Museum. In a related theme, the V&A was the first public museum in the world to be artificially lit. Workers could come in the evenings, “furnishing a powerful antidote to the Gin Palace”, and giving working families culture instead of booze.

This room shows that in the later C19th many designers were infl­uen­c­ed by Japan. The wave patterns on the stove doors, the peacocks on the frieze tile panels, and the flower motifs on the blue-and-white tiles … all come from the east.

C] The west­ern ­most room, the Green Dining Room-Morris Room, was designed by Morris. The sub­dued gold and greens colours of the scheme show that he was still under the sacred influence of the Gothic Re­vival. He dec­or­ated the walls with Elizabethan wooden panelling, below a sect­ion of green plaster with olive branches in low relief. And the stained-glass windows had female figures painted by Edward Burne-Jones and Philip Webb. Each table had matching myrtle-green Burleigh crockery.

In 1864 the Museum bought some stained glass from Morris, Marshall & Faulkner Co. The estimate for the windows was accepted in Sept 1866 and the estimate for the ceiling and panelled dado was accepted in Oct 1867. The work was finished in 1868–9. Burne Jones' dado rail art displayed the signs of the zodiac and his designs for the wind­ows showed medieval domestic tasks. 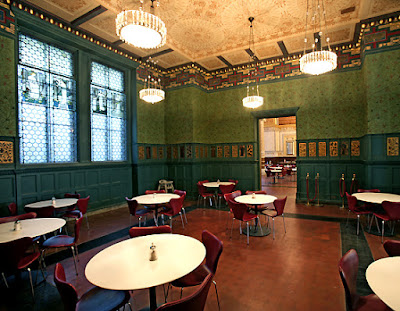 The rest of the decoration was by Morris' friend, architect Philip Webb. Webb took his inspiration from medieval and Eccles­iastical sour­c­es eg a font in Newcastle Cathedral for the frieze, and medieval manuscripts for the ceiling decoration. The four hanging lights were designed much later, from a drawing by Philip Webb, and were installed in 1926. Morris’ pattern-making was in the plaster-work on the walls – Tudorish leaves, flowers and berries.

Sir Henry Cole retired in 1873 but by 1889, public opinion demanded that Museum work be somehow com­p­leted. The Victoria and Albert Mus­eum was built from 1899 and opened in 1909, representing a return to the idea of the museum of priceless treasures in marble halls. The lavishly decorated, historic refreshment rooms that stunned and delighted visitors in the Victorian era were way beyond my personal taste, but these treasures are still well worth visiting today.

Sadly we did not visit the interior. While we complain now about the length of time it takes to complete buildings, it is nothing new by the timeline of the construction of the V&A.

3 great decisions. Educate the working class via culture, no entry fee to the museum, and affordable meals for workers.

Leah and I are members of the V&A. It's my very favourite Museum of all that I have seen all over the world. The new members dining room has just opened.
See: http://www.carmodygroarke.com/V_and_A_Members_Room/index.html
CLICK HERE for Bazza’s unthinkable Blog ‘To Discover Ice’

Next time! I have seen William Morris and his associates before of course, but it special to see their designs in a very public building. Good on Sir Henry Cole for making such splendid choices.

There was something very special about the Victorians' commitment to raising adults' cultural standards via informal education i.e not at a university.

This is not the first time I have been envious of you and all the other British history bloggers. Joining the V & A's membership will be my very first task on our next trip.

In the meantime, my beloved National Gallery of Victoria should have reciprocal rights

Hello Hels, I was endlessly impressed with the V&A when I was in London. Not only did I make exciting discoveries or locate famous examples in every field that I study, the entire building itself is one of the most consistently beautiful museums. I never even had time to notice these fascinating restaurants, but will definitely check them out next trip, that is if I can tear myself away from the exhibits.
--Jim

you can eat and drink well at every important museum, but the V&A restaurants are an integral part of the historical displays. Your don't even have to apologise for the spending money and time in the restaurants because they are as important as the Flemish Unicorn Tapestry (c1500) or Antonio Canova's The Three Graces :)

I didn't mention the rest of the V & A architecture to keep the post down to 1000 words. One side of the Lecture Theatre building was intended to be the main entrance to the museum. This Italian Renaissance area is decorated with terracotta, brick and mosaics. The symmetrical building has arched windows and a loggia over the entrance. The frieze in the pediment shows Queen Victoria and the 1851 Great Exhibition!!

These restaurant's all look so elegant. I am sure I ate in a different space when I last visited the V&A. I did enjoy my visit and the displays I chose to view in the short time I was there.

me too. Normally my mind can concentrate on exhibitions only for 1.5 hours, before my eyes start glazing over. So I always allocate a proper lunch time in the middle of a gallery tour, preferably in the warm sunshine. The restaurants at the V&A, Rijksmuseum, NGV, Tel Aviv Museum of Art, Venice Guggenheim etc have therefore been significant parts of my art history life.