How did the deaf communicate? Before the French priest Michel de l’Epée devised sign language in the C18th, the deaf were written off as useless citizens. For the first time, the priest had demonstrated that deaf people were no less intelligent than their peers. The C19th saw the creation of the world’s first hearing aids, based on Alex­ander Bell’s tele­phone. They were clumsy, and although there have been enormous improve­ments with time, hearing aids could not reproduce high frequencies - they could only amplify residual hearing. The result was that many deaf people cont­inued to use sign language, combined with lip reading.

This was the situation until the early 1980s when Dr William Gibson became aware of the cochlear experiments. Now we need to read Bill Gibson: Pioneering Bionic Ear Surgeon written by Tina Allen, 2017.

Bill and his identical twin were born (in 1944) in the British city of Devon, into a family of doctors. Their father was still fighting the war in France! Bill Gibson eventually decided he wanted to be a doctor, moving to study in London in the 1960s. Later, as a medical graduate, he specialised in London in otology-ear surgery. Gibson was eventually one of the top Ears, Nose and Throat consultants in the UK.

There was already a primitive version of the bionic ear available in Britain but it provided only a dot-dash sort of sound. Developing this into a multi-channel device that could convert sounds into el­ec­tronic impulses that the brain could hear was progress. 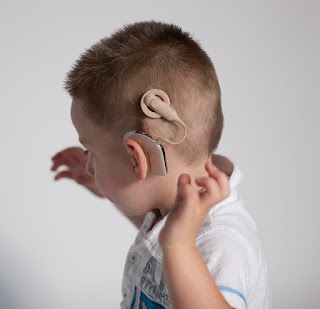 Bill knew about Australia’s Prof Graeme Clark's research into cochlear implants, work that was largely dismissed in the UK. In particular, Prof Graeme Clark and his team in Melbourne University’s Otolaryngology Department were examining ways of using new technology to help deaf people. They focused on the cochlea, the part of the ear that passed sounds to the brain.

Underst­anding the potential of the Melbourne work, Gibson saw the opp­ortunity to join his surgical skills to the device. The Gibson family emigrated to Australia. It was great that Prof Graeme Clark was very supportive of the recent British arrivals and it was great that Bill’s twin brother had already mar­ried an Australian.

In Australia, Julia Patrick noted, the Melbourne ENT hierarchy regarded Prof Clark as eccentric and his work futile; appar­ent­ly they considered the idea of following speech without lip reading and signing to be silly. Fortunately the Uni­versity of Sydney was open to individual research, so Gibson applied for, and accepted the first Professorship of Otolaryngology/ENT at Sydney Univers­ity.

Surgically inserted in the ear of these two patients, the implants did not actually cure deafness; it was a prosthetic substitute for hearing that did the work of the damaged hair cells of the inner ear, the cochlea, to send sound signals to the brain. When it worked, there was a great excitement, seeing the joy on the face of deaf patients when they realised they were part of a hearing world.

There were inevitable failures as the medical teams learned more about distinguishing between patients who were suitable for implants and those who were not, but the profession noted clear progress. The device became compact and Gibson developed a way to implant it.

The first generation of recipients were people who had lost their hearing in adulthood, because they understood the concept of spoken communication. Gibson believed that while restoring hearing to adults was important, the focus should be on youngsters who had been deaf from birth and had never learned to speak. By the age of 7, their speech organs would have effectively atrophied.

By 1986 the cochlear team in Sydney had successfully carried out 20 implants for adults and Gibson was ready, willing and able to perform the surgery on congenitally deaf children. If they received an implant from 9-18 months of age, speech would naturally follow hear­ing. Gibson chose a four-year-old girl for an implant in 1987, which involved convincing medical regulators that the process was ethical and practical. She was the first paed­iatric recipient of the Australian-designed bionic ear in the world. This brave little girl learned to both und­erstand and use speech.

When Dr Gibson controversially decided to implant cochlear devices in children, he received many letters criticising the plan. One group in particular, The Signing Deaf Group, believed that cong­enital deafness should not be seen as a disease to be cured. Instead the focus should be on signing, itself a valid alternative language.

Gibson’s goal was now to identify babies born deaf, allowing them to have an implant. With Gibson’s persuasion, NSW initiated a success­ful early-detection programme, now Australia-wide. With a cochlear implant, children born congenitally deaf could go to a regular school and lead the life of a normal child. Between 1984 and 2014, he performed the bionic ear operation 2000+ times! 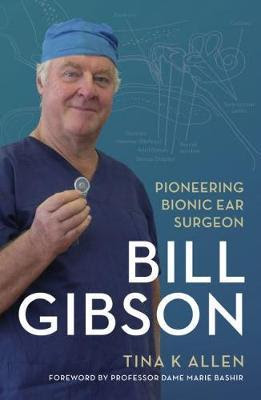 More recent progress
Dr Gibson helped establish Cochlear Implant Club and Advisory Ass­ociation, a group that enabled implant recipients to meet regul­arly, providing support to each other and feedback to doctors. And to obtain funding for specialist facilities and post-op therapy.

The vital personal accounts of 40 of Professor Gibson’s patients are included in the Australian chapters of the biography. The book also considered the issues Dr Gibson experienced in establishing a top class cochlear implant programme, known today as the Sydney Cochlear Implant Centre. The twelve branches of the Centre were one of the many legacies of his career. Another success was the small incision he developed for cochlear implant surgery, to reduce wound breakdown to practic­ally zero. Plus he advised a NSW Minis­t­erial Committee on the best screening test to be used in hospital on new-born infants.

Prof Gibson is now overseeing research into the cause and cure for the debilitating Menière’s Disease. This condition of the ear has resisted medical knowledge since the cond­ition was first identified in France in 1861 by Prosper Menière. Sydney now has the first laboratory in the world dedicated solely to Menière’s Disease Research.

What an illuminating post. I have heard much about cochlear implants and the resistance by parents ( maybe deaf themselves?) against the implants for children saying their deafness is not a disease. As a normal hearing person, I cannot understand not wanting the same for your children. But also I am devastated that Bill Gibson does not seem to be credited anywhere much (on a Google search) with his pioneering work except on Australian websites under Graeme Clarke - both clearly amazing doctors. Hopefully the new biography will help spread his fame and the importance of his work.

As someone of the same age as Professor Gibson, I have recently been affected by vertigo with some relation to meunieres disease so I am very grateful for any research into relief for the symptoms - minor though they are compared to deafness.

As often, Hel, you seem to touch upon aspects of my life.

I have struck that myself, where deaf people become very defensive if they are considered to have a disability. My answer would be, if it restricts you from leading a so called normal life, it is disability.

Great post and I am now somewhat educated about the cochlear implant.

The biography of Dr Bill Gibson, specially commissioned by CICADA/Cochlear Implant Club and Advisory Ass­ociation, was only launched recently (Feb 2017). So I understand why most people haven't seen the book around yet.

But that does not explain your scant findings in a Google search. And what about a Nobel Prize for Medicine? Shame, medical profession, shame!

I can understand why adults don't want their children singled out because of a faulty organ and shuffled out of mainstream schools etc. But I read that the implantation of cochlear implants is considered by some communities to be cultural genocide. Oh really?

I expect every parent in the world to be delighted to make their children's life as fulfilling and serene as possible. With whatever methods the parents choose!

Hello, great post . Deafness is definitely a disability but learning to sign etc may mitigate against handicap. Personally I would like my children to have as many opportunities as possible .
I had a friend who was an engineer in that 1980s team . He was a young father who decided to be paid a wage rather than take some shares in the company . Such a sad decision !!! The share price is huge now . A wonderful company with a wonderful product.

Hello Hels, While I can distantly understand the point of view of the deaf community, I think that behind this there is more than a trace of the idea that their sense of identity comes only from their being deaf. Of course they can make their own decisions about getting the device for themselves, but cures such as operations or cochlear implants would lead to greater interaction and identification with the world.

The amazing part of this story is how Dr. Gibson pursued the elements of technology and medicine and made these devices a reality.
--Jim

This is lovely story. Now we can forgive Australia for Foster's Lager! I wonder why the bright orange flight recorder is referred to as a Black Box. Must be something to do with B F Skinner.
(I'm off to Exeter for a few days now, so might not be able to comment on any new post for a while.)
CLICK HERE for Bazza’s execrable Blog ‘To Discover Ice’

that "their sense of identity comes only from their being deaf" is a very limited notion that I hope is not true. After all, until recently the procedure had been reserved either for children, or for adults who had previously been able to hear. So for most deaf adults, CIs were nothing they had to realistically consider.

Now it seems that technology has improved, and adults who have been deaf all their lives might have to think about whether they want to try a CI or not. Not all will choose the option, but many will.

is Exeter not covered by smart phones and iPads? :) Have a great holiday anyhow!

I too would rather my children have as many opportunities as possible. I am all for parents being able to make all medical decisions on their children's behalf. But during these first years of life, a child’s brain is much more likely to adapt to the cochlear implant’s electric stimulation than a teenager or adult would. To wait until a child turns 18 or 21 so that he can make his own medical decisions... may be a bit late.

What a wonderful story, Hels! I am no good at science, unfortunately, but you explained the
technology very clearly and simply.

My fourth form science teacher told my parents he would not fail my science exam that year, only if they PROMISED I would never try and do science again :) True Story!

I loved reading the book but my spouse/blog assistant had to translate the medical technology.

As often, Hel, you seem to touch upon aspects of my life.

thank you. Blogs should be academic enough to stand up to proper analysis but personal enough to make the reader feel included.

Thanks for sharing very helpful information. I found another Ear surgeon in Kalkaji, site , they provide very helpful services.

Find best Caring Family & General Practitioner Doctor in Singapore through Anteh Dispensary Pte Ltd. Our dedicated healthcare team has the skills and resources to take care of your needs.

welcome to the blog. Do you basically agree with my historical analysis?