Who was Paul Julius Reuter of the news agency fame?

Frenchman Charles-Louis Havas (1783–1858) founded the modern press agency. He translated information from abroad for the French national press, aware of their growing interest in internat­ional aff­airs. And by 1825 he had founded his own news agency Agence France-Presse/AFP. In 1835 he created the Agence Havas and began sup­plying news about France to foreign customers. Bernard Wolff and Paul Reuter, two of his young employees, were encouraged by Havas to go on to create their own news agencies, both of which eventually became famous.

Reuter did go on! Reuters is a modern internat­ional news agency that brings the latest politics, entert­ain­ment, technology and business news from around the world. But exactly who was Paul Reuter?

Israel Beer Josaphat/Paul Julius Reuter (1816–1899) was one of the 5 children of Rabbi Samuel Levi Josaphat in Kassel, the capital of the Hesse-Cassel Electorate that was later abs­orbed into Prussia. When his father died in 1829, young Israel was sent to his uncle in Goettingen where he was trained as a clerk in a local banking house. At Goettingen University, he met the famous mathematician and astronomer Carl Friedrich Gauss (1777–1855), who was experimenting in electro-telegraphy. Israel was excit­ed by the possibility of using telegraphy i.e sending signals along electric wires for rapid news reporting.

While still in his late 20s and now called Paul Julius Reuter, the rabbi’s son moved to London in 1845. Converted to Christianity a month after arriving, he was baptised under that name in a Lutheran chapel in London. Within a short time, he married a German woman called Ida Magnus, the daughter of Friedrich Martin Freiherr von Magnus, a Berlin banker who was Lutheran. I cannot find any rec­ord of Rabbi Josaphat’s response to his son’s conversion and church marr­iage. Nor can I find any response by Rev Magnus to his elegant daught­er marrying a Jewish businessman. So I wonder which came first – meeting the lovely Ida or deciding to rid himself of any obstacle to advancement by converting?

The couple were constantly moving home. I am assuming that Jewish Kassel had been too small and too insular, and Paul Julius Reuter wanted to join the outside world. He moved to Berlin where he ran a book-shop and publishing house called Reuter and Stargardt, assisted by his father-in-law's capital. Apparently Reuter and Stargardt also pub­lished pro-democracy pamphlets. Being even mildly radical was not a good thing to be when the 1848 rev­ol­ution broke out against the King of Prussia. Reuter’s politics would have been noted by the royal authorities.

The Reuter family moved to Paris to work for a news agency, before he moved again and created his own agency in Aachen. Now consider this. In 1850 Reuter started using carrier pigeons to carry news and stock prices to Brussels because there was a gap in the telegraph link. Although people laughed, the pigeon service that had two great ad­vant­ages. Firstly the pigeons were more direct and faster than the train system. Secondly Brussels was an ideal centre for transmitting Reuter’s messages to Germany and France. But pigeons will only fly one way – back to their home loft. So the relatively cheap railway to Brussels had to transport the pigeons in the other direction, daily! 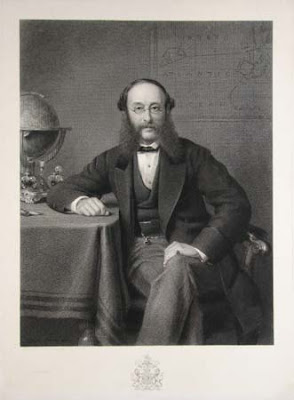 Converted to Christianity, well married, ennobled and with a successful career,
Paul Reuter had it all.
Engraving after Rudolf Lehmann, c1880
National Portrait Gallery London

Paul Reuter was 34 when he returned to London in 1851, on the advice of Werner Siemens (1816–1892). Together with his colleague Sigmund Englaender, Reuter opened a telegraphic office near the Stock Exch­ange, which he pers­uad­ed to supply him with its prices ..in return for details from cont­inental exchanges. Now using the new Calais-Dover telegraph line und­er the English Channel, Reuter was immed­iately getting London news­papers to sign up to his new high-speed service. Speedy, accur­ate stock market quotations between London and Paris were essential.

Paul Reuter acquired British nationality in 1857. Later called Reuter's Telegram Company, Reuter's agency serv­ed Continental clients and newspapers, the provincial press, and by 1858 the London daily newspapers as well. The first on board was the London Morning Advertiser and soon The Times was a client. Reuter's first impressive success came in 1859 when he sent out to London the text of Napoleon III’s speech, warning of the Austro-French Pied­mont­ese war in Italy. Another of his coups was the news of Abraham Lincoln’s shooting in 1865.

Paul was created Baron Julius de Reuter by the Duke of Saxe-Coburg Gotha in 1871, raising the ordinary lad from Kassel to the privileged nobility. The title Baron was later confirmed by Queen Victoria, thus conferring the privileges of the nobility to Reuter in Britain as well.

A formal agreement between the world’s three major agencies, Reuter based in London, Wolff in Berlin, and Havas in Paris, was signed in 1859. It divided the world between them for the collection and dissemination of inform­ation, great for newspapers across the globe and great for the three news agencies!

These were busy decades for the news agency because overland telegraph and undersea cable facilities were developing rapidly. In 1869, three years after the laying of the first transatlantic cable, Reuter laid his own undersea cable connecting Brest in France and Massachusetts in the USA. By the 1870s, Reuters had established itself as the leading international news agency, extending its serv­ices from Europe to North and South America, to coastal Africa, China, the East Indies and Australia. New agree­ments with Wolff and Havas left the entire British Empire (one third of the globe) to Reuters.

In 1878 Paul Julius Reuter retired as managing director of Reuters to be succeeded by his son Herbert. Paul died in 1899 at his house in France, and was buried in London. The family business connection to the company ended in 1915 when son Herbert died and the firm was sold off. 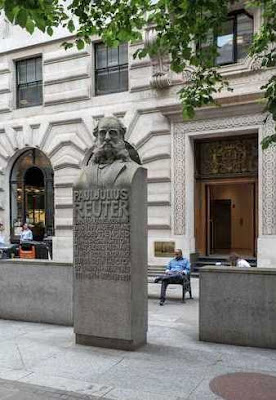 Granite statue of Paul Reuter,
sculpted by Michael Black
and unveiled in London in 1976

To demonstrate the the significance of the news agency around the world, and to honour Paul Julius Reuter personally, a memorial was commissioned by Reuters to mark the 125th anniversary of the company's foundation. The statue, with its wealth of information carved in granite on the front and back, is behind the Royal Exchange where he founded the London base of Reuters news.

My main references were the Jewish Virtual Library and Discover Thomson Reuter.

I expect Reuter converted to Christianity to make him more acceptable to London society. We hear the names almost daily, Reuters and AFP, so thanks for some background of these respected institutions.

Hello Hels, Reuter rode the crest of technology to deliver important news quickly and so build his empire. Today, technology-driven news distribution by internet and other sources is geared mostly to deliver tabloid-type news to appeal to a low common denominator. Internet news, in particular, is designed to generate clicks and not to impart information, while television news is endlessly repetitive. Maybe the homing pigeons weren't such a bad idea.

Who knew that carrier pigeons could only fly one way? I did not even know that news agencies used pigeons.

The Associated Press (AP), Reuters and Agence France-Presse (AFP) are the three biggies, even today. So those early pioneers, in a new industry, must have been modernising and entrepreneurial. Viva Charles-Louis Havas, Bernard Wolff and Paul Reuter!

is there any reason why technology-driven news distribution could not be high quality, to appeal to an educated and thoughtful population? I would ask the same question, whether we were talking about 1845 or 2015.

The homing pigeon was bred for its ability to find its way home over extremely long distances - up to 1,800 km, if necessary. It had an innate homing ability and could return to its nest using its own brain navigation system. The only issue for Reuters etc was how much message could be safely attached to each pigeon's leg.

Clever mind must attract each other. No wonder Werner Siemens and Reuter spent quality time together.

Werner von Siemens was very involved in the field of electrical engineering in the second half of the C19th. With his design of the pointer telegraph he laid the foundation for Siemens & Halske Telegraph Construction Co, founded in 1847 and soon developed into an international operation. In 1866 he discovered the dynamo-electric principle, which helped establish the idea that electricity could be used as a power source. The company became known worldwide for its successful handling of technically complex, extremely high-risk projects eg laying major trans-Atlantic cables and building the Indo-European telegraph line.

You are right! Two very clever men, in the same countries at EXACTLY the same time (born 1816). Even to their honours. Werner von Siemens was ennobled by Emperor Friedrich III in 1888.