German South West Africa/later Namibia was claimed by Otto von Bismarck in 1884 for Germany. German citizens were starting to move to the distant colony in the 1890s and into the Edwardian decade.

I knew the capital of Namibia was Windhoek, and I even found the isol­ated coastal port of Luderitz on the map. But I had never heard of Kolmanskop/Kolmannskuppe and could not find it anywhere. That is be­cause it is now a ghost town covered in desert sand in southern Namibia, 850km south-west of Windhoek.

Coastal Luderitz was fully connected by a railway service to the rest of the country. But why did anyone go inland from Luderitz into the sand dunes? In 1908, something very strange happened. A railway worker found unidentifiable stones in the sand dunes and showed the stones to his boss August Stauch, the railway inspector for the region. Mr Stauch, a former employee of De Beers in South Africa, took the stones into Luderitz and found they were diamonds! 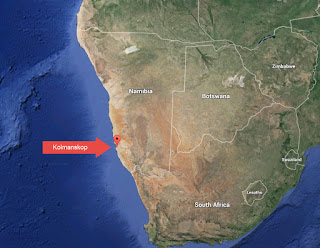 When the rumours of the discovery in German South-West Africa were first heard in sophisticated British Cape Town, no-one quite believed it. All the available ground in the vicinity of Luderitz was quickly pegged out and claimed. Labourers, organised in search lines and protected against the blowing sands, crawled along on all fours carrying jam jars for their finds.

German citizens started to arrive, so the German govern­ment quickly encouraged its men to mine the diamond deposits profession­ally. As soon as the first miners made a lot of money, they needed to build the pleasant homes and facilities they would have had back in Germany. So one architect, Herr Ziegler, was brought in to design all the amenit­ies and institut­ions of a middle class town - hospital, ballroom, power station, primary school, casino, theatre, sporting facilities and a pub with imported German beer. All the houses were pleasant but the ones built to accommodate the town's architect, teacher, doctors and mining managers were splendid.

Infrastructure for the town was critical. Since there was no local water, fresh water had to be bought in by rail from 120km away and pumped into storage tanks. An ice plant was established to make blocks to use in food coolers and to make soft drinks. The water also nurtured lush gardens with manicured lawns, rose beds and eucalyptus trees. And since the miners wouldn’t travel by camel, the first small train service had to be built linking Kolmanskop to the beach town of Lüderitz, a 10 k trip. 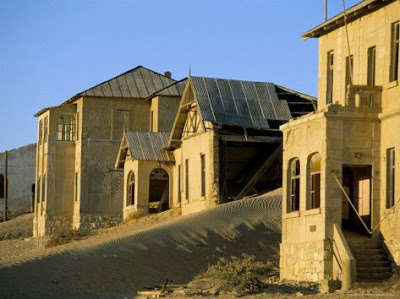 The primary school was well designed to cope with the heat

The maximum population of Kolmanskop was only 1,300 (360 German adults, 40 children and 900 contract workers). So German entertainment, for citizens far from home, became even more essent­ial. A lovely hall was built, with acoustics so fine that opera companies could be imported from Europe to perform professionally. The hall was also used by the local orchestra, theatre group and gymnastic performers. (The mine paid for the cultural facilities, presumably to keep the townsfolk active and content).

In 1912 alone, the area apparently produced a staggering million carats of diamonds. So despite the heat, dryness and distance from civilisation, shops and professional practices opened for service. The town soon had a local butcher, baker, post office, a hardware shop, two doctors’ offices and a medical clinic. In these six years just before the war, the Kolmanskop diamond mine was at its most productive - five million karats of diamonds were extracted!

WWI interrupted mining operations somewhat, but in any case, the resumption of mining in the 1920s saw a slow depletion of deposits. Even worse, rich diamond deposits were newly located in 1928 in Oranjemund along the Orange River, 270km south of Kolmanskop!! Many of Kolmanskop's inhabitants joined the rush to the Orange River, deserting their lovely homes. Eventually there were no more diamonds to be found in Kolmanskop and the mine was closed in 1954. By 1956 not a living soul was left.

Kolmanskop’s history was short. Within 40 years it had become a well designed town in an unwelcoming land, then it flourished and finally it died. Today the area is operated jointly by De Beers and the Namibian government, so visitors to the ghost town are encouraged to book a tour from Luderitz and spend time with a knowledgeable guide. 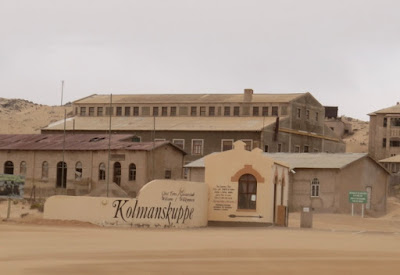 The Kolmanskop Museum, which was established by De Beers in 1980, represents a fascinating history lesson on the local diamond fields. There is a focus on the diamond rush of 1908, and there is an extensive collection of photo­graphs from 1908 on. Plus visitors can examine a yard filled with mining equipment that was used by the early diggers for sorting the diamonds from the sands.

The lovely homes with their elegant German architecture have been blown apart and or half covered by moving sand dunes. Each roof is open to the sky and the glass windows have separated from their ornate frames. Inside the homes, colourful tiles remain fixed to the walls and some hand-painted wall designs are still clear. But if tourists want to visit the homes and the communal facilities now, they should know in advance that they will be knee-deep in sand. Kolmanskop is popular with set designers and photographers who need to evoke ghost towns.

Prepare in advance. Most buildings are in ruins these days (see Strange Abandoned Places), but some have been well re­novated. And read Kolmanskop's own history page.

The town is part of the Sperrgebiet/restricted zone, an area of 26,000 square ks that can only be visited with a permit. Fortunately the whole Sperr­gebiet is also a natural park, for which tours are available each morning.

You never cease to surprise me with where in the world you will take me and what I will learn. Thank for the pointer to Strange Abandoned Places.

There are bigger and longer lasting diamond mines in Russia, Botswana and South Africa, and the Kimberley region of WA is pretty impressive too. But for as long as little Kolmanskop lasted, it was an amazing find.

my travel agent said that if we are ever going to South Africa and going on the luxury Blue Train, we should set aside a couple of days for Namibia. It has not happened yet, but it will.

But a strange abandoned place that I _have_ visited is in Australia. I will publish that post in a few weeks.

Hello Hels, Mining seems to go hand in hand with abandoned towns. The U.S. West is famous for them, and even Taiwan has an abandoned gold mine, which however has been turned into a museum. Buildings seem so substantial and permanent to us, yet nothing can stand in the way of a collapsed economy.

I don't know if Kolmanskop is really old enough to be the ultimate in mystery or in picturesque. If you like romantic ruined buildings, check out Clarence John Laughlin's artistic photos of decaying Antebellum Louisiana buildings.
--Jim

It seems that the Germans came late to colonialism but, like all the other European nations with colonies, they literally bled it dry.
Now I'm off to look at Strange Abandoned Places and you have given me an idea for my next post which will be about a place which never actually existed. Then it did - then it didn't!
CLICK HERE for Bazza’s fabulous Blog ‘To Discover Ice’

why would a colonising power, or a mining company for that matter, pour endless money into creating a town with every modern facility and not want their money back when the mines run out? They could have sold those amazing buildings to a large religious community that wanted some separation from the urban centres. Or to the Education Department, to be used for boarding schools, training centres and vocational facilities. Or to an arts facility, for rural training in painting, architecture, design, museology etc.

But then it depends why a thriving town became a ghost town in the first place. If the town was destroyed by fire or earthquake, I suppose no-one would want to go back.

I expected the colonial history of German South West Africa to be as straightforward as Australia. Australia was a British colony until Federation (1/1/1901) and then a sovereign, independent nation ever since.

German South-West Africa was a German colony from 1884-1915, run rather brutally by the Germans. During WW1, the German colony was invaded by Britain and came under British control. After WW1 ended, South-West Africa was run by the South Africans as a mandate, under The League of Nations. It became independent nation in 1990, now called Namibia. What a messy, unfortunate and painful history for the locals.

I will look forward to seeing your place which never actually existed :)

Not sure about Namibia but the Blue Train is worth every penny.

Yes! The Blue Train looks fantastic, especially the the dining room, observation car, club car, bedrooms and meals. The route from Pretoria to Cape Town stops at Kimberley Station for an excursion, to visit the museum, travel on the old tram and tour the diamond mine.

There is an additional route from Pretoria to Durban, that I would like to see.