My son was in Memphis Tennessee on business. He was surprised and delighted to see that Memphis now tops the list of American cities with Melbourne's iconic old green trams! The Tennessee city was apparently keen to acquire the trams that had originally been sold to the southern city of New Orleans. These gorgeous trams now make up over a third of the Memphis fleet. Here is his story.

Young Philip Belz (1904-2000) left Russia (now Western Ukraine) in 1910 to join his father who had already migrated to Memphis Tennessee. In 1935 Philip Belz started a company that specialised in building inexpensive flats, which eventually grew into a major real estate company. And as he became more successful in business, Philip Belz's charities expanded to include schools, hospitals and medical research facilities, opera and concert foundations in Memphis and in Israel. His son Jack (1927- ) joined him in the business and continued to build Belz Enterprises.

Son Jack & Marilyn Hanover Belz, who were married in the elegant Peabody Hotel in 1948, learned the concept of community service from dad. Jack purchased the Peabody Hotel from his father in law, Isadore Hanover, in 1975. Rescuing the old city landmark from its aged condition, he re-opened it in 1981, and planned to revitalise the Central Business District with Peabody Place.

The Peabody Hotel was soon recorded on the National Register of Historic Places listings in Tennessee. 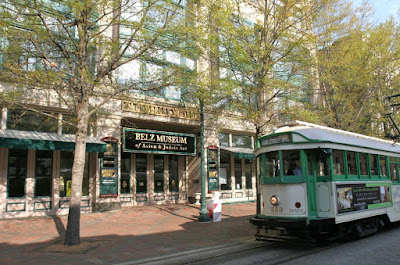 The Belz Museum of Asian and Judaic Art
South Main Street in Memphis.
Note the old Melbourne tram gliding past.

Jack's collecting passion was very special. The Belz Asian Art Collection started in 1960s when Jack and Marilyn made their first purchases from a gallery in Los Angeles. This collection rapidly grew over the decades, focusing at first on jade. Eventually the museum pieces came to include ivory, coral, rose quartz, tiger eye, cloisonné and cinnabar, but Mongolian silver jade still accounts for one third of the collection. As the Belzes started collecting pieces, they worked with Christie’s of London because of Christie’s reputation as a safe source and its connection with larger, reputable museums, including the British Museum.

In 1995 Jack Belz agreed to donate some of their collection to a temp­or­ary exhibition at the Pink Palace Museum in Memphis - it was a major science and historical museum that specialised in exhibits ranging from archaeology to chemistry. The Belz dis­play was part of a complementary exhibit to the Wonders: Imper­ial Tombs of China exhibition taking place at the Cook Convention Centre.

By 1998 the Belz Foundation had been established and their mus­eum was named Peabody Place Museum; it was located in South Main Street in Memphis, in three small rooms on the lower level of the Pembroke Square building. It featured hundreds of works of jade, tap­es­tries, furniture, carvings and other art objects.

The museum was often referred to as The Jade Museum, since one of the main materials featured was sculptured jade. The main Asian collection featured artworks from the Qing Dynasty which ran from 1644-1911. Fortunately for art lovers, the Qing rulers were known for their love of beauty rather than conquest; many pieces were commissioned by royalty and adorned palaces, temples, and institutional buildings. At least until the Revolution of 1911 that over-threw China's last imperial dynasty. 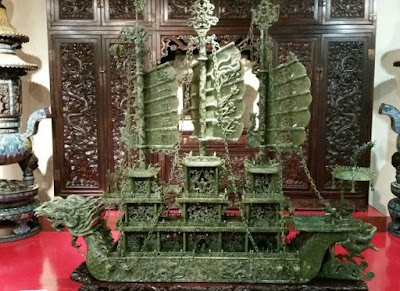 Ivory pieces were also prominent in the Asian section. Many of them were created from prehistoric woolly mammoth tusks found in the permafrost of Siberia. On their discovery, the tusks were traded to China and often carved into dioramas by artists. And on display near the ivory were blue and white pottery from the Ming dynasty (1368-1644) and 2,000-year-old neolithic pottery and burial pieces.

The Imperial Retreat Gallery represented an emperor’s private space, complete with a rosewood lounging bed, meditation room and seating space for contemplation; on the walls were beautifully hand-crafted silk robes and accessories worn in the Qing era.

Over the years, the museum has expanded and now encomp­asses 24,000 square-feet of exhibition space and 1,400 objects. Theirs is now one of the largest private collections of Asian art in the USA, so more display rooms were needed.

In 2007, the Belz family opened a new section dedicated to Judaic art, so the institution was renamed: Belz Museum of Asian and Judaic Art. The Judaic Gallery contained 200+ works of art created by contemporary Jewish artists working and living in Israel. The works featured here were bronze relief panels and sculptures by Daniel Kafri and paintings by Ofra Fried­land, both from Jerusalem. Kafri’s richly rendered panels and sculptures represented events from the Torah i.e the first five books of the Bible. Friedland’s large, vivid paintings included scenes from the Holocaust and the rebuilding of the nation of Israel.

Also in the Judaic section is an early 1900s violana virtuoso, a com­bination player piano and violin that plays superb Jewish Russian music. 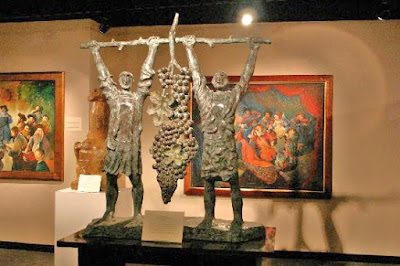 In taking on a role as an educational instit­ution, most field trips were organised for local high-school students. But there are only c8,000 Jews in Memphis, so these field trips needed wider advertising. They got it! Most of the 10,000 visitors who toured the museum last year were not from Memphis. Special exhibits, brought in every six months, are increasingly part of the attraction.

What a story! It makes one glad that Philip left Russia.
Funny about the trams.

I have been to the east coast, the west coast and to New Orleans. But never to Tennessee.

While I know little of Memphis, by my impression of it, it's not a place where one would find an Asian and Jewish museum. I can see the former Melbourne tram has been substantially altered.

Hello Hels, When I was little, Cleveland still had its old yellow trolley cars with operable windows. They had great character and were fun to ride. They of course replaced them with modern bullet-proof monstrosities, and I have no idea where the old cars are now, or if they were scrapped--I think that some are in museums.

The Belz's deserve great credit for forming their collections and sharing them with the public. Like most collections from a single source, they are especially interesting because they reflect the interests, means and goals of a single family.
--Jim

nod... it is a great story. Migrants are usually so grateful to be accepted in their new country, they add new energies and skills that the nation didn't have before. Security checks are always essential, but after that, new migrants like Philip Belz will surely enrich the economy, culture, sports, cuisine etc. He worked hard and contributed endlessly.

true true. For Australians and New Zealanders, the west coast in particular has two huge attractions: 1. planes from Melbourne, Sydney and Auckland largely focus on California and 2. the west coast climate, beaches and cities feel very much like home for us.

There are only four American cities currently operating Melbourne W-Class trams - Memphis, Dallas, San Francisco and Savannah. New Orleans used to operate a group of them on their Riverfront Line and Seattle's Melbourne trams ceased operating in 2005.

But U.S. Streetcar Systems Website says nothing about any alterations the cities made in the trams' colours etc. http://railwaypreservation.com/vintagetrolley/australia.htm

The Belz family really do deserve great credit for opening their very special private collections up to the rest of the world.

I have only one reservation. In 1922, Albert C. Barnes created a foundation in Pennsylvania to display his collection _according to his aesthetic beliefs_, in a mansion built _according to his taste_. No changes would ever be allowed! In the decades that followed, unfortunately there were slow, expensive and unsatisfactory court cases.

That boat is so minutely carved, it shows what an impressive material jade is. I wonder if we have a comparable collection here.

I can find jade jewellery in Australia but no museum or collection of jade art. The Asian Art Collection in the National Gallery of Victoria is well worth seeing, but it covers all Asian societies and all types of Asian art objects.

If a reader knows about other collections, I would appreciate a note.

Memphis is infamous. In April 1964, Dr Martin Luther King came out of his Memphis motel door, was shot by a sniper and killed.

I saw the Foxtel documentary called "Justice for MLK: The Hunt for James Earl Ray". In this entire tragic story, I must say that J Edgar Hoover sounded evil, not Memphis.