My grandfather and father were humanists and opponents of military killings, before WW1 and WW2 respectively. Yet both agreed to fight as soldiers, even before conscription was introduced. So why did they not ask the courts for exemption from military servce? Or why did they not enlist in an army job that promoted life and not death eg nursing. Perhaps they believed in a glorious ANZAC legacy.

I was keen to see what Brendon Nelson, Director of the Australian War Memorial in Canberra, had to say about A Glorious Legacy (Weekend Australian, 23rd-24th July 2016). The 1st Anzac Corps went in at Pozieres in France's Somme valley in 1916, making 18 attacks along the Pozieres ridge. War historian Charles Bean went on to describe Pozieres as more densely sown with Australian sacrifice than any other place on earth. In just 6 weeks, 23,000 Australian deaths and serious injuries occurred. From the front line, Bean confronted blackened men everywhere, torn and whole, dead for days. A mortally wounded Australian asked of Bean “Will they remember me in Australia?”

Bean’s beloved cousin, 2nd Lieutenant Lionel Butler, was killed at Mouquet Farm in Aug 1916. After Butler’s burial, Bean confided his inner thoughts to his diary, doubting “there was anything in this war to justify such sacrifices.” [My grand­father and father would have agreed whole­heartedly]. Reflecting on Pozieres and Butler’s burial years later while writing the official history, Bean pondered what made the Australian digger so special. What had been the dominant motive that impelled them? The answer lay in the “mettle of the men themselves”. “Life was not worth living unless the soldiers could be true to their idea of Australian manhood”. If there was anything in WW1 to justify such sacrifice, Bean wrote this: future generations of Australians were left the legacy of knowing that a Life of Value is a life spent in the service of others and our nation – whatever the cost to ourselves. 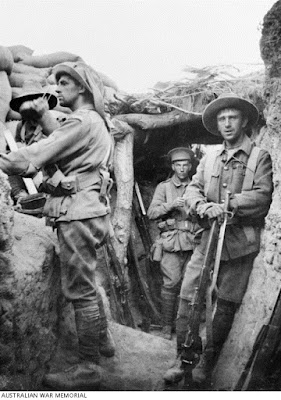 But this could not have been right in 1919 and it isn’t right now. The war was filled with heroism and mateship, to be sure, but it was pointless, futile, disease-ridden and immoral. And it did not take a PhD in philosophy to see that slaughtering other nations’ sons was no more honourable than seeing our own lads slaughtered.

Then the question became: how did Australians at home, during WW1 and in the generations that followed, learn what constituted a Life of Value? Robert Nichols (Weekend Australian, 23rd-24th July 2016) reiterated that we learned about the horrors of Pozieres and other battle fields specifically from Charles Bean, other historians who were witnesses, and the official artists who were commissioned to paint paintings and take photographs.

Bean had left Australia with the Australian Imperial Force in Nov 1914 as an official war correspondent. By the time he returned to Melbourne in June 1919, he understood he would be commissioned to write Australia’s official WW1 history. The 12-volume history Bean eventually produced – writing six volumes alone and editing the rest, was quite consciously a monument to the AIF and the war it fought. It was called The Official History of Australia in the War of 1914–1918.

Thus the official, true history of Australian soldiers, and their WW1 experience in Europe, was laid down for all times. And it was expanded. In London a fellow former journalist working for the Australian High Commis­sion­er, Harry Casimir Smart, suggested to Bean that “the war diaries of our force, which were then being sent to the British War Office, should be directed to our own authorities instead”. The Australian War Records Section, led by John Treloar, paid great attention to collecting these unit diaries, gathering up maps, orders and signals, photographs and correspondence. Plus relics from the trenches and battle fields.

Anther source of Australian war history was written by film producers and shown to families in their local cinemas. Perhaps there was more propaganda being distributed than serious history, but families in Australia only knew of the war from the newspapers they read and the films they saw. Their sons’ letters, I am assuming, were censored. 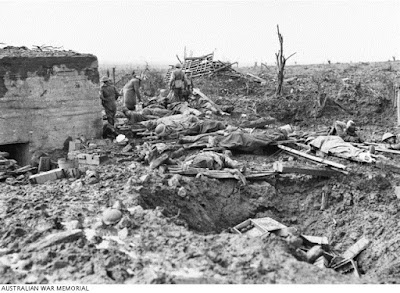 By early 1917 Bean was collecting all these documents and objects with the idea of eventually building a museum in Australia. Bean wanted the Federal Government to recognise a Museum of War Relics, to display and exhibit the objects AND to be a national memorial for those who had fallen. Until such a museum could be built in Canberra, the relics would be kept in Trelaoar’s Australian War Records Section in Britain. By 1918, Bean was envisaging a classical building, in the style of the Lincoln Memorial. A great central hall would be panelled with the inscribed names of all 62,000 Australians who died in WW1. On each side of the hall would be a wing, one to hold relics and pictures, the other to hold written records.

When Charles Bean, and all his fellow historians and artists, created the definitive 12-volume history of Australia in WW1, they laid down the Glorious Australian Military Legacy for all time. Bean and the others had to explain the ordinary soldiers' sacrifices to their families back in Australia ... in order to make those sacrifices meaningful!

But could any other story be told? Yes! Michael Wood (BBC History Magazine Sept 2016) argued that it was the people’s collective memory that kept WW1 alive, at least in Britain. Recorded in the 1960s for the BBC Series The Great War, old soldiers honestly shared the horror they experienced, still shocked 50 years later by its utter pointlessness. The People’s Experience for these old men consisted of years spent in the service of heroism and futility.

Wood believed that a central political, cultural and psychological influence on history was already available; war poets and writers memorialised the heroic but meaningless suffering of the Great War. It was the soldier-poets who gave the true history of WW1, the real experience of the people. That is how, Wood argued, communal memory worked and how the chain of transmission between generations is kept alive. Historians weigh their sources and make their judgments. But the people remember! I am assuming this was true for Australian soldiers as well.

The sacrifice of young men was essential to the politicians and military leaders. But it was never meaningful to their grieving parents.

the parents and widows grieved on and on :(

Notwithstanding that oral history and memories are very unreliable, no less weight should be given those forms of history as only those can express the real emotion. However, the returnees from WWI, and II for that matter, were quite reticent. Who could blame them for not wanting to remember.

While I've heard all the stats before, just reading the figure of 23,000 dead and badly injured Australians in one battle is just plain shocking. 62,000 killed in WWI. The horror and the pointlessness of it. We weren't under threat. Our population then was 5 million. It is an horrendous figure as a percentage of our population, if not a stand alone figure.

I thank some deity that now our young people are too smart to commit such suicidal participation in war.

I read a Monash bibliography in Bookclub. Bean was very cruel to Monash, when Monash's career was being promoted post-Gallipoli. Bean didn't tolerate Jews, people who could speak German or military men who publicised their own careers.

In war soldiers' letters are always rigorously censored. I saw footage of Gallipoli soldiers who asked their parents in letters why they were in Turkey fighting Turkish lads for Turkish farmlands. The Australian soldiers' view seemed to be "Turkey for the Turks". All censored!

Are our young people too smart now to make a glorious sacrifice via mass military suicide? I think not. All my brothers, cousins and school mates went into the Vietnam ballot in the late 1960s and simply hoped they would not be called up. No-one left the country, went to court as a C.O or challenged the legislation in Parliament.

Charles Bean was rather vicious when it came to stopping John Monash's promotions. Bean devotes chapter VI to Lieutenant General Sir John Monash’s succession in May as Corps commander and, unprecedentedly in the Official History, gives him a long biography. Their relations on Gallipoli, while fleeting, were inharmonious and full of distrust. Bean's 1918 diaries are thickly sprinkled with prejudiced impressions and harsh judgements of Monash; it is likely that this is the main reason why Bean placed so long an embargo on release of the diaries. In particular he considered Monash was so ambitious for personal and Australian glory that the Corps could not safely be entrusted to him. So he, Keith Murdoch and others plotted in May-July 1918 to replace Monash with Brudenell White. It was a reprehensible affair.

It's the pointlessness and complete waste of WW1 which I'd like to see emphasised more. And the dire impact of all those shell-shocked and damaged men and lonely spinsters on Australian society afterwards, setting in train many of the social issues we still grapple with. In Sydney recently I went to an interesting talk by Prof Joan Beaumont on the impact of volunteerism in WW1 in forming our culture today.

What we don't seem to hear much about is that Germany nearly won WW1 in the spring of 1918 and it was the Australian troops, now very efficient at killing, who had a great deal to do with 'our side' eventually 'winning' and ending that horrendous war. I learned this when researching 'Brothers in Arms: The Great War Letters of Captain Nigel Boulton, RAMC, & Lieut Stephen Boulton, AIF', essentially an anti-war book.

yes indeed. When I read Brothers in Arms, the first sentences I wrote were: "We know what the senior politicians and military men thought about WW1. But what did the ordinary Allied soldier think?" "The horrors of the trench, rotting horseflesh, mud, poor food, shoddy weapons, poison gas and the sheer terror of waiting for death, these were the Big Lie futilities of the Great War".

The title of this blog post, A Glorious Legacy, was in inverted commas to appear slightly ironic. I cannot claim to be a true pacifist, since I believe our armed forces should be focused on defending Australia and our dependent neighbours. But conscription was immoral, putting COs in gaol was obscene and sending our army into countries that have not harmed us was probably illegal.