Buvelot, Ashton and a famous art school in Sydney

The artist Louis Buvelot (1814-88) was probably the spiritual father of many young Australian artists; he was a man who had done his own art training in Lausanne and Paris and spent 18 years in Brasil. When Buvelot migrated to Melbourne in Feb 1865, he was already a very middle aged man. Yet he became an Australian pioneer of plein air impressionism, as exemplified in France by the Barbizon School painter Corot. His realistic representation of the Australian bush later had a profound influence on many of the artists of the Heidelberg School in Melbourne. 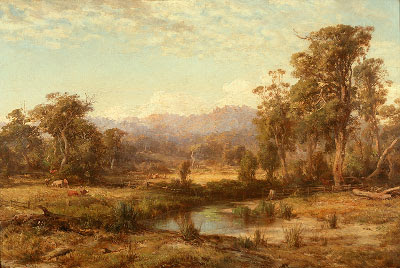 When Julian Ashton (1851-1942) arrived in Australia from Britain in 1878, he was invited to Melbourne by newspaper owner David Syme to work as an illustrator for the Illustrated Australian News. In one of those great flukes of history, Ashton’s next-door neighbour turned out to be the artist Louis Buvelot.

At that stage, colonial art was trying to be as English as possible. Young painters, raised in Australian landscapes and Australian light, were criticised for depicting a harsh and dry Australian bush, instead of the soft English countryside.

Julian Ashton, who moved to Sydney to work on a particular project in 1883, became a leader in the push for the recognition of a new, truly Australian art form. One of Ashton's first achievements in Sydney was to convince his fellow trustees at The Art Gallery of New South Wales to buy the work of local Australian artists of promise. "Still Glides The Stream” by Arthur Streeton was the first of these. 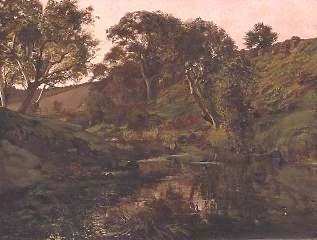 Soon Ashton was teaching at the Art Society of NSW School and continued to work there throughout the early 1890s. Another young artist, Sydney Long, studied under Ashton at Art Society and became Ashton's star pupil and protege.

Ashton founded the Sydney Art School in 1896 in Beaumont Chambers in King St, a centre for aspiring young Australian artists. There Ashton advised students to work only from first-hand experience, to paint familiar scenes and to choose landscapes that charmed the eye. Ashton later claimed that his own work, Evening in Merri Creek (1882) was the first plein air painting created in Australia.

Ashton’s students and associates read like a Who’s Who of Australian artists in the late 19th and early 20th C - Elioth Gruner, George Lambert, J.J. Hilder and Dorrit Black were my favourite artists of this period.  From 1896, Thea Proctor studied with Julian Ashton before travelling to London in 1903. There, on the advice of Tom Roberts, she studied at St John’s Wood Art School. The already well known artist, Charles Conder, studying with Ashton whenever Conder was in Sydney, often worked with the students in the scenic Hawkesbury River area. 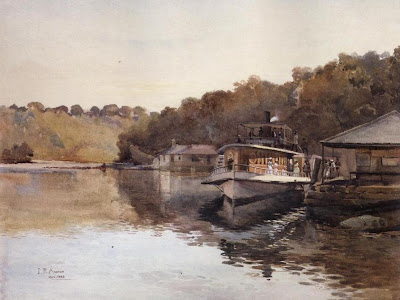 I am not sure why the King St address proved inadequate, but I do know that the art school moved to the Queen Victoria Markets in 1906. Ashton continued to produce his own Impressionistic portraits and landscapes during these years, and influenced the concept of Australian art patronage. He must have been a great teacher and role model; as late as 1924 the incomparable William Dobell enrolled at Ashton’s school, increasing his attendance at classes from three nights a week to as many lessons as he could fit in.

Henry Cornwallis-Gibbons joined the teaching staff of The Sydney Art School in 1922. He worked closely along side Julian Ashton until Ashton died, then he ran the school until his own retirement in 1960. In the meantime, in 1933, the school moved to the Rocks area of Sydney where it still functions today. As the school’s own history states, it is notable that throughout its entire history the school has always been administered by practising figurative artists who are also teachers. 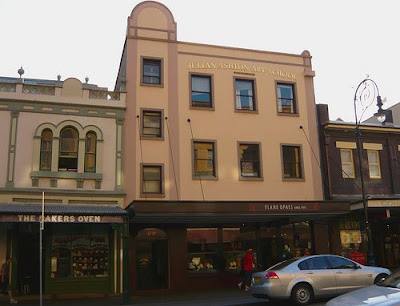 In 1989 the Sydney Art School/Julian Ashton Art School, along with its antique casts, easels and studio furnishings, were classified by The National Trust as a cultural living treasure.

From all our lectures, I assumed Melbourne was the more important centre of art.

But then young artists starting moving to Sydney in the first place, soon followed by travelling to Britain and especially to France.

Hello Hels, These paintings are beautiful, as well as representative of the Australian countryside, and were destined to be appreciated. Good for Julian Ashton, who provided the early impetus for their collection.

"Still Glides the Stream" is also the name of the autobiography of the much-loved British writer Flora Thompson. Going back to the original poem by Wordsworth, it is ironic that his message that nature is forever, while man is temporary, is now refuted by all the damage being done to the environment. Looking up the stream of the poem, the River Duddon, I see that even its bucolic estuary "is at risk from coastal defence works, grazing by agricultural stock, sea level rise, recreational pressure and bait digging."
--Jim

I know about pressure and cultural cringe. But you would think painters, raised in Australian landscapes and Australian light, would ignore criticism for depicting a harsh and dry Australian bush, instead of the soft English countryside.

You are smart! I didn't even recognise the Flora Thompson reference.

Now I might have to analyse what Heidelberg and Sydney artists like Arthur Streeton meant by "real Australian landscapes". Firstly I was fully aware of the symbolic value of a new and authentic Australian art form. But they also needed to give an accurate reflection of the dry, harsh climate the artists (of all media) saw every day.

I imagine the New World has always suffered from cultural cringe, ever since European colonialism started. But it wasn't only British art critics in Britain who wanted soft English landscapes. Australian gallery directors and exhibition organisers also took a long time to value honest reflections of Australiana.