I have often referred to Orientalist art in this blog, largely that created by late 19th century French, British, German and Russian artists who spent time in Algeria, Morocco, Tunisia, Egypt, Israel or further East. Examine for example the markets,  armed male guards and life in the harem.

But there were only two references to Orientalist architecture in this blog. Firstly the Royal Pavilion in Brighton was designed in a style that was a mixture of Moorish, Indian and other tastes, all built in stone and iron. Secondly the pier in Nice was an immense structure with a bold dome, covering a bandstand, concert hall, theatre and sea bathing. The rooms were apparently decorated in exotic Orientalist styles – Japanese, Indian, Turkish and Moorish

Then along came John MacKenzie whose excellent book Orientalism: History, Theory and the Arts proposed that western architecture received genuine inspiration from the East, but in a much more specific way than I had imagined. In the architecture of leisure, Orientalism was particularly prominent in Britain – in bandstands in parks and beach resorts, in kiosks and later in theatres. The influence of Oriental forms, motifs and colours was everywhere, in buildings’ interior decoration, textiles, carpets and light fittings. Architects merely flirted with the East but interior decorators passionately embraced it.

Nowhere was this better seen than in the Victorian bandstands which were once the centre of parks and beach resorts around the UK. The first domed bandstand was made from iron and erected in the Royal Horticultural Society's gardens in South Kensington in 1861.

Parks were becoming increasingly popular places for families to spend their spare time and bandstands provided a musical centre to thrill the tired workers. So popular were they that in the later Victorian and Edwardian eras, a band­stand could draw crowds of up to 10,000. By 1900, 1,200 bandstands had been built in Britain alone. And not just on the beach. Every public park worth its salt wanted a beautiful bandstand - the city of Leeds alone had 18 bandstands in all its parks! 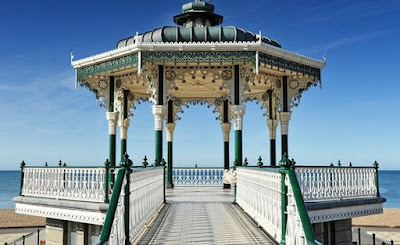 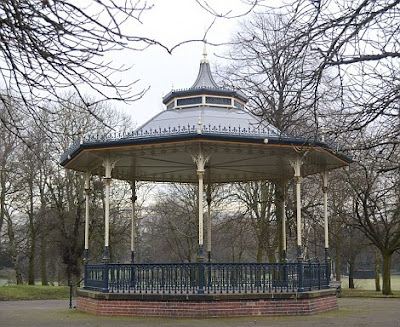 I also recommended Fred Gray’s book Designing the Seaside: Architecture, Society and Nature to the students. The Orientalism of seaside architecture clearly offered visitors the dream of being in a distant and exotic place, a place of leisure and sexual promise. It was a significant new, grand and opulent style, without needing to reference any one, specific Eastern culture. There was no political or military goal; just fun-filled and fashionable leisure buildings on, or overlooking the beach. The beach, with its focus on health and leisure, was certainly different and more exotic than everyday life in a grey inland city.

Only one quibble remains in my mind. The bandstands, which were often inspired by the expansion of the empire into India, were primarily utilised by the 25,000 brass or military bands in the UK. I wonder if the military bands at least partially reminded the holiday makers of Britain’s colonial battles and victories.

The breakthrough in popularising seaside Orientalism came with Brighton’s West Pier of 1866. Drawing on the nearby Royal Pavilion for its inspiration, designer Eugenius Birch made great use of decorative cast iron in a partly-copied and partly-invented style called Ornamental. Cast iron lampposts encircled with serpents, Indian style openwork screens (an almost direct imitation of the Pavilion’s own screens although in iron rather than stone) minarets, pinnacles and domes were all in a vaguely oriental conception.

Following his West Pier experiment, Birch took the Oriental theme further in the large Hastings Pier pavilion of 1872. Seized by other pier des­igners, pleasure pier Orientalism in Britain reached its peak with Mr St George Moore’s Marine Palace of 1901, built on Brighton’s third pier. From piers, Orientalism spread to a wide range of seaside buildings including bandstands, seafront shelters, pavilions, winter gardens, theatres and concert halls. The Royal Pavilion in Brighton might well have been the inspiration, but the Pavilion was architecture for a privileged elite. The piers and bandstands, on the other hand, were pleasure centres for a widening mass of ordinary families on holidays. 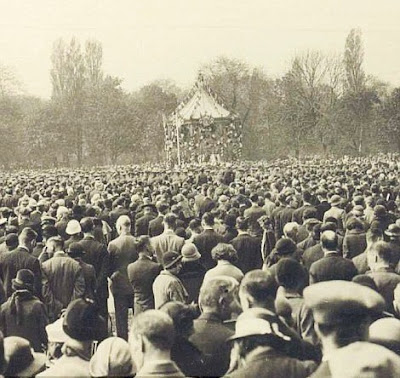 The most loved bandstand was Brighton’s birdcage bandstand, built in 1884 as part of a wider scheme of improvement for the town’s western seafront. Like much seaside arch­itecture of the late-Victorian period, the cake-icing decorat­ion reflected its relaxed, beachy context. The clearly extravagant and Oriental style of the decoration of this bandstand evoked distant lands, particularly some of the Oriental buildings in Southern Spain.

In C19th Britain, cast iron was the most important material used in Oriental architecture; the cast iron decoration could transport people to another distant or imaginary place. But cast iron decoration was never approved by all the critics. John Ruskin, arbiter of mid-C19th taste, thought it was a vulgar and cheap substit­ute for real decoration. 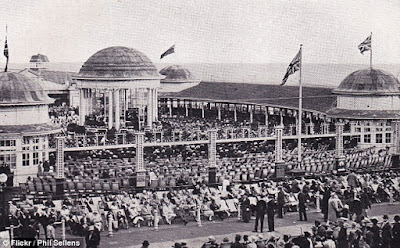 Pleasure-pier Orientalism in Britain
Hastings Pier, first opened in 1872
and restored in 2011-2016 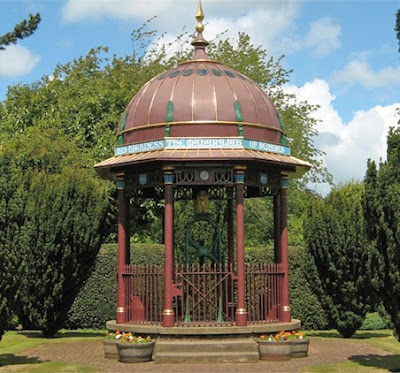 Maharajah's Well
in Stoke Row, Oxfordshire
designed by magistrate Edward A Reade and
donated by his Highness The Maharajah of Benares in 1864

By the interwar years, more modern architectural critics saw seaside cast iron and Orientalism as unfashionable, fussy Victorian mediocrity and a hindrance to the development of modern resort towns. Of the 1,200 bandstands built in the UK by 1900, many were scrapped in WW2. Later others were demolished ..as public parks and seaside resorts declined. Today fewer than 500 remain but a major effort is now being made to restore some of the most beautiful Victorian bandstands to their original Oriental glory.

Helen I loved the orientaist art course. Naughty paintings inside European homes made sense - the owners could enjoy the harems and slave markets in privacy. But naughty architecture was very public.

My feeling about the late 19th century was that Europeans had more leisure time and wanted some fun in their lives. You can see this with the arrival of pleasure piers, for example. But nothing said leisure and fun better than bandstands in parks and on coastal resorts. Oriental communities might have been seen by Europeans as unChristian, lazy and exploitative, but Orientalists were definitely seen to be experts in exotic, colourful and musical fun.

There are some wonderful examples and they make most of Australian designed bandstands appear very restrained. Even when I was quite young and I did not know what purpose they served, they were great places to play.

too right! My parents chose a different family drive each Sunday afternoon in the olden days, and my brothers and I loved the Edwardian bandstands, tulip gardens, Puffing Billy etc etc. Anything a bit more exotic than normal, daily life.

The problem with Britain is that the season for outdoor entertainments is very brief. Look at that photo of Middlesbrough. It was so crowded that _every_ single soul in North Yorkshire (or wherever the city is, these days) must have wanted to hear music in the sunshine.

It is interesting that you mentioned a single room of Orientalist luxuries in some American homes. I had never seen that before, until Lord Leighton built his home in Holland Park London from 1866 on. In particular, have a look at the 17th century Damascan tiles.

Given your interests, I'd love it if you'd do a post some time on Orientalist synagogue architecture, a style that seems to have dominated in the late nineteenth and early twentieth centuries. What were the impulses behind this trend, in a seemingly very different context from the beach one?

good to hear from you. European synagogue architects had the same issue as any other European designers - would Orientalist or Moorish Revival architecture be suitable in cities like Berlin or Vienna? The Moorish style turned out to be perfect for three important synagogues that I could discuss in a guest post - Dohány Street Synagogue in Budapest, Semper Synagogue in Dresden and Leopoldstädter Tempel in Vienna.

Orientalist architecture in holiday towns extended beyond bandstands. Designed by famed Victorian naval architect Eugenius Birch, who was also behind Eastbourne Pier and Brighton’s West pier, the original Hastings Pier opened in 1872 with a lavish banquet for 600 guests. Like all the best places, the ornamental pleasure pier was a masterpiece of seaside orientalism — all onion domes, minarets, and lacy ironwork.

Hastings Pier has just reopened to the public after a £14.2 million restoration project, including an £11.4 million grant from the Heritage Lottery Fund.

Many thanks
I will add a photo of the original pier's domes etc straight away.

Wonderful article, Hels. I didn't realise that the pier in Nice was so interesting. I must read more about that!

I like the combination of Oriental-influenced architecture with green English parks.

Nice’s Council was very smart when it came to attracting visitors. I can imagine earnest French men inspecting Brighton Palace and London’s Crystal Palace, and rushing home to create a pier and casino a la Belle Epoque France. I would love to have seen those exotic Orientalist styles in Nice, adapted from Indian, Turkish and Moorish taste.

The climate in Mediterranean Nice must have been perfect for architecture drawn from "Eastern" nations. There would have been months more outdoor promenading and musical performances in Nice each year than there would have been in Edinburgh, for example. But perhaps that is exactly why leisure piers, parks and bandstands were so beloved in the UK.

Helen have a look at an orientalist well designed by Edward Anderdon Reade. The painted cast-iron columns and metal superstructure stood on a circular brick base. The well shaft was c120 m deep. The Indian style onion dome could be explained by the plaque: "Given by his Highness The Maharajah of Benares in 1864".

Reade had worked for the Maharajah in India and inspired him to give a well to Stoke Row by explaining the difficulty residents had in obtaining water. The structure and machinery cost nearly £400 so it was fortunate the well was the first known established Charity in Great Britain of an Indian nobleman.

super find, especially since the well was actually given by a real maharajah. I will add a photo into the blog post.