The Angry Young Men were a group of British writers who came to fame in the 1950s, especially John Osborne and Kingsley Amis. They were young males, often from working class families in post-WW2 Britain.

In once sense, this was not a good time for families who had been let down in the past by traditional British society, its education system, the economy and class structure. In another sense, the post war era (1950s) was the first time the working class had some disposable income and a degree of cultural respect. Unemployment was very low and young people could move out to a bed-sit or a shared flat, instead of living with mum and dad.

Osborne’s famous play Look Back in Anger 1956 was attracting attention to a new style of drama. He strongly expressed anger at what Britain had become post-war, deliberately provoking other people to also be dismayed about their previously proud nation. Literary works began to deal with lower class themes for the first time in ages.

My late mother, a child of the Russian Revolution and a Labour Party die-hard, admired the working class lads who became the Angry Young Men enormously. But in 1956 I was more interested in the Melbourne Olympic Games and the Christmas pantomimes than I was in the play Look Back in Anger. Now a new book caught my eye: “John Osborne: Anger is not About..” written by Peter White­brook (Oberon Books, 2015).

Why did John Osborne (1929-94) turn into an angry, insec­ure adult with an unstable career and a hopeless history of wives, girl friends and lovers? He married actress Pamela Lane in 1950, actress Mary Ure in 1957; novelist and screen writer Penelope Gil­liatt in 1963; actress Jill Bennett in 1968; and arts journalist Helen Dawson in 1978. For long periods of time, Osborne also went out with a myriad of other women including actress and writer Stella Linden, designer Jocelyn Rickards and writer Doris Lessing. He had only one child of his own, treated her abusively when she was an adolescent and never spoke to her again. In almost every relationship, he eventually treated his women with anger, hatred and punishment. Osborne’s hate knew no bounds. 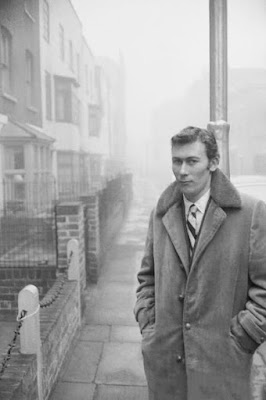 
The crisis that made Osborne a subject of national scandal was learned at his mother’s knee. In his autobiography “A Better Class of Person” (1981) Osborne wrote that his mother Nellie Beatrice Osborne, was an uneducated Cockney barmaid who rained withering contempt on her son throughout their arid life together. She attacked him for his timidity, his spindly looks and his bed-wetting. His loving father, an adman with literary yearnings, died of TB when Osborne was only ten, leaving the boy alone with the grabbing, uncaring crone Nellie. A hateful mother would make anyone full of self-hatred and insecurities!


It was good (or bad) timing that Osborne became a celebrity at the start of an age of tabloid press intrusion. He showed publicly his impatience with the status quo, his refusal to be co-opted by a bankrupt society and an instinctive solidarity with the lower classes. But I still could not tell if he truly hated British society then, or if he was just using the tabloid press to whip up interest in his work.

To me his anger seemed very real. In his most important and provocative play, the working class character Jimmy Porter was indeed represented as an embodiment of the young, rebellious post-war generation that questioned the state and its treatment of the working class. But Jimmy was also brutal and abusive to his young and pregnant wife.

The author Peter Whitebrook chased every contemporary source of information. He read the playwright's own memoirs of course and those of many others in Osborne’s life back then, plus he recently held interviews with any of the playwright’s close colleagues who were still alive. Yet I realised half way through the book that Whitebrook and I were going to come to different conclusions.

Whitebrook's publishers wrote that here was a playwright from the wrong side of the tracks whose career rose very quickly and very early. Only in his mid 20s, his dazzl­ingly high-octane performance and in a succession of increasingly ambitious plays written in the late 50s/early 60s, he was able to unite a profound intelligence with a caustically honest depth of feeling. By refusing to submit to caution, he laid bare in some of the most poetic and incendiary language heard in the C20th theatre, not only his own struggles and contradictions but those of the era. Almost single-handedly, he made the theatre important again. 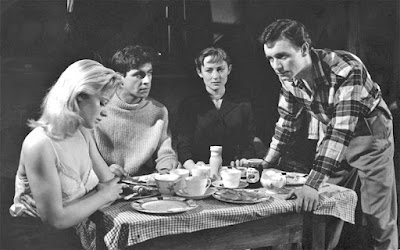 But did he really revolutionise British theatre? Yes he did, but it was not overnight. Look Back In Anger was written in seventeen days while sitting in a deckchair on Morecambe pier. The legend is, of course, that Osborne’s play was an immediate success and in a flash British theatre was changed forever. Replaced by plays set in drab working class northern bed-sits, the posh drawing-room dramas from playwrights like Terrence Rattigan and Noel Coward, were seemingly banished overnight.

Unfortunately Osborne's play was generally initially dismissed by most of the critics, took in very little money and the production was seen pretty much as a miserable failure. Only when the BBC decided to broadcast a short excerpt of the play one evening did listeners like what they heard, and decided to go and see the play for themselves. Takings immediately doubled at the box office. The effect snowballed and the play eventually transferred to the West End. Not an overnight success, but Osborne had now become a very famous angry young man indeed.

Osborne’s only musical, The World of Paul Slickey (1959), was not a success. When the angry audience booed Osborne out of the theatre, they followed him down the street yelling. Osborne escaped but the following morning, he read the newspaper critics’ terrible reviews. "The ordeal lasts for 3 boring hours" and "extraordinary dullness", wrote the Manchester Guardian, The Times and Daily Telegraph. Osborne proclaimed that the critical assault was exactly what he would have expected from ignorant London theatre reviewers. Soon Osborne got out of Dodge with the show’s costume designer, the two of them running away to France.

On a personal level, Whitebrook acknowledged that few drama­tists felt compelled to reveal so much of their own flaws, anx­ieties, passions and hatreds as John Osborne did. But Whitebrook exposed Osborne as a mixture of generosity and cruelty; charm and gracelessness; organised energy and chaos; sex appeal, depression and alcoholism – and about that, I am not so sure. I did not see any generosity or charm in Osborne’s life.

Hello Hels. It was just the 60th anniversary of the first production of this play and I am just about to listen to a new BBC radio production starring David Tennant and Ian McKellen. The play was definitely what led to the genre known as 'Kitchen Sink Drama' in the UK. Lynne Reid Banks, Shelagh Delaney and Arnold Wesker, who died last month were all inspired by this tradition. Thank you for a very interesting article.
CLICK HERE for Bazza’s fabulous Blog ‘To Discover Ice’

The angry young men, too young to fight in the war, still had to survive the bombing, rations, absent dads and being shifted to the country as total strangers.

Imagine all those protagonists, angry young men who were disillusioned with modern society, making a mark on British society 60 long years ago! Our values are so different now, I wonder if we moderns could even understand the language they used. Ditto their clothes, music, politics (if any) etc etc

So it is fascinating that the BBC is producing a brand new radio version and is presenting to a generation that knows nothing about the war and its next decade.

Without the shift in attitude towards the working classes in the UK we may never have had the Beatles! We much to grateful to Osborne for.

The same children who suffered at home during the 1939-45 world war were faced with a double whammy. They had expected that once the war ended in victory, British families would be living better, cleaner, more satisfying lives. Yet even by the mid 1950s, half the UK population lived in private rented flats or bedsits with little privacy, comfort or warmth. And rationing continued on and on!

I just got the shivers. Just yesterday I wrote a blog post on the Beatles, copying some of the very same thoughts I had used in preparing this Look Back in Anger post.

I think my great uncle must have been an angry young man. He was too young to fight in the war and passed off all my grandfather's medals as his own. It was only when Uncle H died that my father was able to contest the will and retrieve the medals.

This is a fascinating post as always Hels. I'd quite like to listen to the David Tennant and Ian McKellen version of the play your commenter mentioned above.

Written histories are supposed to become more accurate as time passes. Clearly people in 1945-55 could have been responding to their experiences from grief, family pride, fear, depression, guilt or nationalist pride. Clarity normally comes after decades of careful and less feverish historical analysis.

But I am not at all sure we have finally arrived at the "historical truth". My late father was conscripted in Jan 1944 and demobilised in Dec 1945. Years later I asked him what was the most positive thing to come out of his army service - it turned out to be the low-interest bank loan provided to ex-servicemen when they married and bought their first block of land!

I rather wish there were presently a few more angry young people, with their anger directed at those who deserve it. I really hoped the anti Wall Street protests would result in more changes and the protests not abandoned. Opiate the masses with debt, and it seems to have worked.

However experience shows that mass protests make the protesters feel better, but they don't change one politician's views or one policeman's responsibilities. Remember when university students were getting their heads beaten in during anti-Vietnam protest marches? I would do it again in a heart beat, even while recognising that the value (of the protests) was only symbolic.

Osborne’s play was initially hailed as a vital social document. It says a lot about the class-ridden culture of mid-50s Britain and paints a still-resonant picture of a younger generation educated but with nowhere to go. However, what keeps the play alive is its scorching, Strindbergian portrait of a failing marriage. Far from endorsing misogyny, it shows its destructive personal consequences. Jimmy Porter, thrashing around to find his place in the world and provoke his wife, uses words as his weapon: his spouse, Alison, is in no way a pliant punchbag but counters with an angry silence.

Thank you. If Jimmy was seen as the spokesperson for a new post-war generation, do later generations see the play as old fashioned? I assume you will answer no, since you said yourself that plays are not static things - they change their meaning with time.

I last saw the play in about 1964, so perhaps I need to have a newer, fresher look.

But that is a positive thing! I'm not sure my grandfather would ever have seen the world or left Liverpool, never mind supported a wife and 3 children so comfortably, had it not been for the opportunities afforded to him from serving.

*nod* I think that was particularly true for rural workers and for colonial citizens during WW1. They often said that they would be stuck in ....... for the rest of their life, if they didn't rush to join up.

That proved to be a costly adventure for the widows and orphans, but perfectly understandable.