The Maisky Diaries: Red Ambassador to the Court of St James' 1932-1943 was edited by Gabriel Gorodetsky (Yale UP 2015).  The book's material comes from the three large diary volumes written in Russian, translated into English and reduced to one volume.

Born in Novgorod Province to a Jewish Polish-Russian army doctor, Jan Lachowiecki aka Ivan Maisky (1884–1975) studied at St Petersburg University. Maisky enjoyed a very literate bourgeois education and plenty of travel in Western Europe. And because he spent the years 1912-17 in Britain, the young man loved the English language, history and culture. In Britain he established a wide circle of friends from the literary, political and intellectual worlds, including my old Fabian Society friends George Bernard Shaw, HG Wells and Beatrice Webb.

This educated cosmopolitan returned to Russia in Feb 1917 shortly after the tsar was overthrown and soon joined the Bolshevik Party. His command of foreign languages, familiarity with the international scene and friendship with mentor Maxim Lit­vinov, the future commis­sar for foreign affairs, secured the young man’s rapid rise in Soviet Diplomatic Service.

As a diplomat, Maiskey served in various countries. He ret­urned to London as Soviet ambassador in late 1932 and remained there for 11 critical years. This was an important posting because Stalin, who had claimed sole power in 1929, saw Britain as the Soviet Union’s main rival in the power struggle for Europe.

Hitler’s ideology attracted many members of the British aristocracy; in particular influent­ial figures like Lord Rother­mere who praised British fascists in his newspaper (Daily Mail). So Maisky was right to sense creeping Germanophilia in sections of the British public and foreign policy, a phenomenon that might have predicted PM's Neville Chamberlain’s later policy of appeasement.

As WW2 broke out, the diaries showed Maisky colluding with Churchill, Eden, Beaverbrook and Lloyd George, seeking to sway Chamberlain from appeasing Hitler, towards a common front with the Soviet Union. 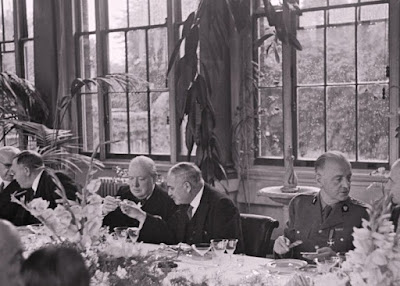 Lunch in the Winter Garden of the Soviet Embassy in London,
given for Winston Churchill by Ivan Maisky,
August 1941.
Photo credit: Yale Books

Chamberlain despised Maisky. And Maisky clearly disapproved of the PM, bel­ieving that Chamberlain was an appeaser with the Germans. Churchill, on the other hand, saw Nazism as the greatest threat of all, and app­eared willing to cooperate with the Soviet Union. But it would not have mattered - Maisky was kept in the dark during the signing of the non-aggression Molotov-Ribbentrop Pact in August 1939. The pact shattered Maisky’s dreams of a united English-Soviet-French front and devastated him personally.

Maisky devoted his 11 years in the UK to getting Britain and the Soviet Union together in an alliance against the Nazis. Cultivated, sharp-witted and free with his handouts of vodka and caviar, Maisky impressed Beaverbrook, Eden, Churchill and others as their man in Moscow, as well as Stalin's in London. But it was only after Chamberlain resigned in 1940 and after the German invasion of Russia in June 1941 that Maisky could arrange a meeting between Churchill and Stalin in Moscow.


Maisky was a universal­ist and atheist but like Litvinov and Trotsky, he did not try to escape his Jewish origins, either in Russia or in the West. It made sense that Jewish Maisky would have a personal stake in the defeat of the Third Reich. In Feb 1941, Maisky met Dr Chaim Weizmann (World Zionist Organisation) and David Ben-Gurion (Jewish Agency). They discussed the fate of the Jews under German rule and appealed to Maisky to assure Soviet support for a safe Jewish state.

Prior to the German invasion of the Soviet Union in June 1941, Chief Rabbi of Israel Isaac Herzog met Maisky in London and secured through him free passage to the Soviet Union and exit permits to Palestine for thousands of Lithuanian and Polish Yeshiva students.

In 1942 and again in 1943, British Jewry and the Yishuv leadership impressed Maisky. He submitted to Stalin a memorandum that outlined the vital importance of cooperating with the Jews. These endless efforts on behalf of the Jewish state gradually moved Soviet policy, leading three critical outcomes: 1. Moscow’s advocacy in the United Nations of the partition of Palestine in 1947, 2. permission for displaced persons to immigrate to Palestine from Soviet-controlled zones, and 3. Russia’s warm recognition of State of Israel in May 1948. 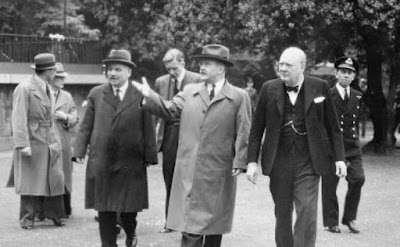 In June 1943 Ambassador Maisky and Ambassador Litvinov were recalled to Moscow from London and Washington respectively, and entrusted with the preparation of the Soviet agenda for any future peace settlement. Naturally the greatest Anglophile of all, Maisky, advocated the continuation of collaboration with the Western Allies.

Since Maisky left a powerful impact on the formulation of Soviet foreign policy, Gorodetsky asked in the book if the ambassador was one of the great men in history, with a central role in shaping history. Maisky had managed to gain celebrity status in the UK, befriending members of the press and politicians on the government side and with opposition groups and intellectuals. However he also had critical failures. Maisky did not per­s­uade his close friend Churchill to launch a second front in Europe or to negotiate a postwar settlement.

Inevitably the onset of the Cold War finally removed Maisky from the forefront of Soviet diplomacy. He paid a great price for 1] despising Hitler and Stalin, 2] working closely with Churchill and 3] striving for a Jewish state. At the height of the anti-Jewish frenzy surrounding the Doctors’ Plot in 1952, Maisky was arr­ested by Stalin’s goons, tortured and confessed to being a British and Zionist spy. Maisky’s private papers and diary were confis­cated and deposited at the archives of the Russian Foreign Office. The ex-ambassador would certainly have been executed; his life was saved at the last moment only by Stalin's death. How ironic that Stalin died in 1952 and Maisky survived.

Fascinating man, who may have more wisely stayed in Britain after the end of the war. Off to google the Doctors' Plot now.

What a shame Stalin didn't die earlier. Not just for Maisky's life and career,

Who was Maxim Litvinov and why was he Maisky's mentor?

the older and mentally sicker that Stalin became, the more bizarre the plots he revealed and punished. Stalin hated doctors anyhow, but in 1953 he reported that many Soviet doctors were responsible for “wrecking, espionage and terrorist activities against the leaders of the Soviet Government.” The arrests started in September 1952, at first a small number of cosmopolitan and Jewish doctors and then the numbers grew and grew (like witchcraft trials).

Stalin was going to put the doctors on trial, then execute them all, given that his show trial were meant to rid the nation of dangerous foreigners. The Doctors' show trials would definitely have been successful, had Stalin not died in March 1953. The surviving doctors were released, immediately after his funeral.

The connection with Maisky to the Doctors' Plot may have been coincidental but a] consider the timing of Maisky's arrest and torture (Feb 1953) and b] note that Maisky was a cosmopolitan, a Jew and a foreigner.

Stalin (1878-1953) may have started his public career relatively normally, but he suffered increasingly from paranoia, manic depression, Narcissistic Personality Disorder and, as suggested in his autopsy, major atherosclerosis in the brain. The longer he lived, the worst his violence was becoming.

Maxim Litvinov (1876–1951) was a very educated Jewish journalist, editor, linguist and political activist who became the Soviet government's first ambassador in Britain after the Revolution. Just a few years older than Maisky, Litvinov saw a soul mate he wanted to support and mentor. They both worked very hard to form a closer relationship between Russia, France and Britain in the years leading up to WW2.

Maisky sounds like he did a lot of good in his career, but it is a source of wonder for me how many "diplomats" cavalierly treat the lives of their citizens and young soldiers in these negotiations.

nod... especially in the years Maisky was active. But you will never know. Gorodetsky acknowledged that the chances of finding intact, honest and contemporary diaries by a Soviet ambassador were remote indeed.