The Hundred Years' War (1337-1453) must have been horrendous. The endless battles dragged on between English Plantagenets and the French Valois, for control of French soil. In the latter part of the Hundred Years War, English forces occupied much of northern France, including Normandy and its capital Rouen, or were under joint Anglo-Burgundian control.

At first, the teenage Joan of Arc (c1412–1431) had inspired an unexpected series of successes against the English army south along the Loire. But then in May 1430 Joan was captured at Compiègne by the Burgundians, an English ally, and was moved to the city of Rouen; this was the city that served as the main English headquarters in France.

Joan was put on trial by the pro-English Bishop of Beauvais, a supporter of the Burgundians exiled in Rouen. It was clear they were going to execute the teenager, but first they wanted to publicly prove it was Sat­an who dictated her act­ions. Thus they could de­m­on­strate that King Charles VII had been a puppet of diabolical forces. The Bishop of Beauvais started proceedings in a tribunal of the In­quis­ition. A clear pol­itical issue was transformed into one of faith and after the Bishop declared her guilty, she was burned at the stake in May 1431 in Place du Vieux Marché (see photo below).

The young woman was later exonerated after a second posthumous trial in Rouen in 1456. Too late to help Joan, but at least many French citizens came to see her as a national heroine and a religious saint. Fortunately Rouen's C15th archbishop's palace survived the centur­ies. Renovation of this magnificent medieval palace, just next to the Cath­ed­ral, began in 2013, led by historians and museum curators. And in March 2015 the Joan of Arc History Museum opened to visitors. The €10 million project combined a modern exhibition space with enough hist­orical content to allow visitors to investigate the legend of France’s saint. The archbishop’s palace complex was a perfect site historic­ally-speaking; its hall was where Joan was sentenced to death. And the archbishop’s palace was a perfect site logistically-speaking since it provides a spacious museum with many exhibition spaces. Visitors can also inspect the palace’s crypts, its C15th tower, the early modern Aubigné chapel and state rooms. 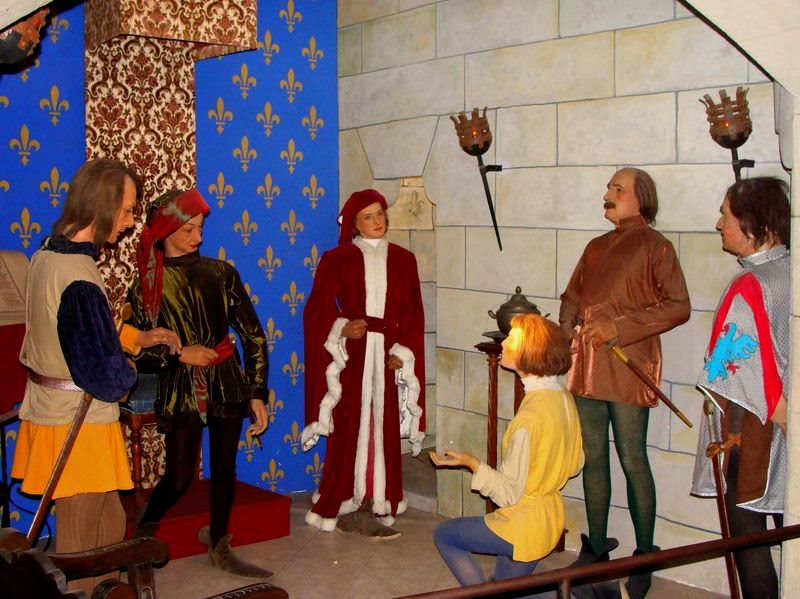 One waxwork gallery inside the 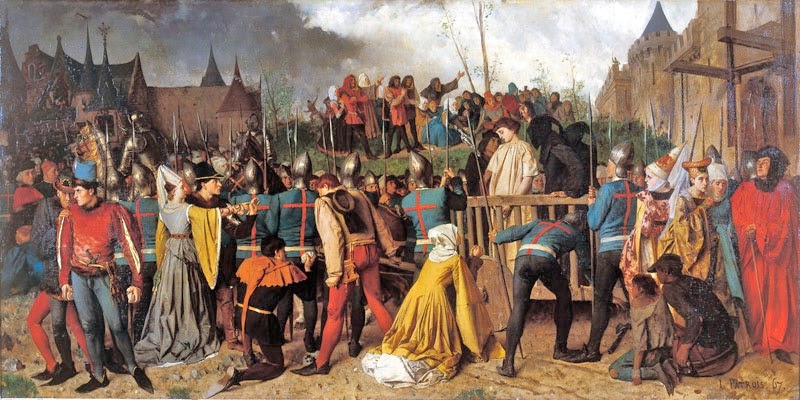 Note that exhibitions within the museum are linked to the historic sites in other parts of Rouen. To have a fuller understanding of the part Rouen played in Joan’s history, visitors are encouraged to visit the Joan of Arc Tower in Rouen Castle where she was imprisoned awaiting her execution. This imposing tower is all that remains of the mighty castle that King Philippe Auguste had built (against the English) in the early C13th. Unfortunately for Joan, the English military was back in control of Normandy during this part of the Hundred Years War.

And the city centre is full of important religious and secular buil­dings. Visit Saint-Ouen and Saint-Maclou, for example. And examine the significant Gros Horloge/clock and the very impress­sive Gothic Law Courts. I also think the city’s Old Market is fascinating. 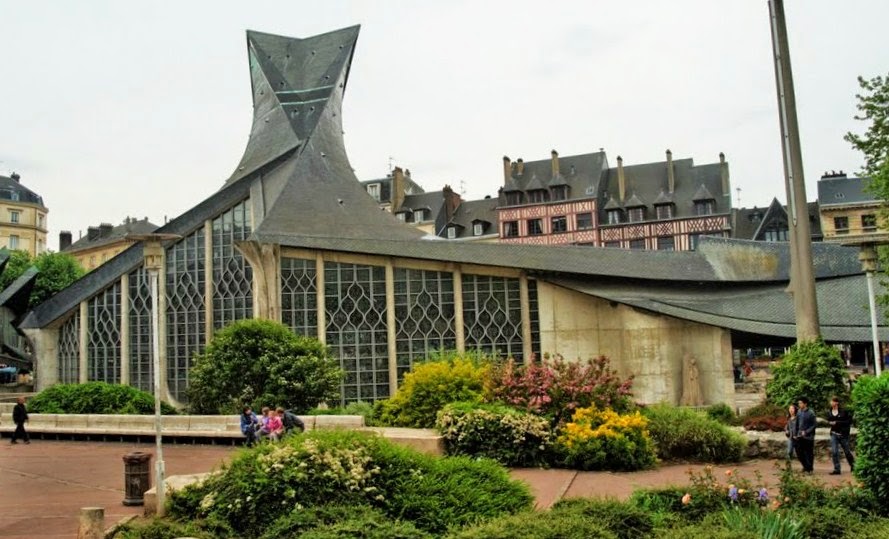 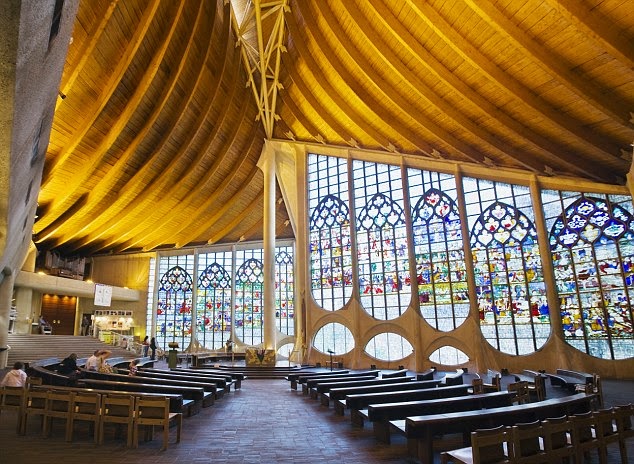 Not everyone loves the contemporary Church of Joan of Arc, built in Rouen in 1979. It is modern in taste but at least it was designed to rescue and display gorgeous panels of C16th stained glass, taken from other Rouen churches. The guide suggested that the shape of the roof of the church and the small hallways evoked the flames of St Joan's execution pyre.

I rather like the 1979 church. Much worse was built in Australia back then. While everybody has heard of Joan of Arc, not too many know the story and you brief summary was very interesting.

Hels, we have a French silent movie of Jean d'Arc's trial. Very interesting plus other more contemporary movies of the lady. Being a Jean d'Arc tragic, we've been to Chinon, Blois and many of the places of her travels but not the places of her final demise.

I amnot sure who was more evil; the English and the Burgundians were equally responsible for roasting a young girl to death. Well worth the trip to Rouen.

Hello Hels, Fascinating that so much material is left to record someone who lived so long ago--not only buildings and places, but also documents such as court records. It would be interesting to inspect some of these in person, although I thought that the waxworks were a bit much.
--Jim

the entire story was action-packed and intense, but really quite brief. In 1428 she had a vision of her favourite saints who told her to a] get the English to leave France and b] bring the future King Charles VII to his coronation.

There were many military campaigns and some important successes, but by mid 1430 her mission ended up in court.

fancy you being a Jean d'Arc tragic :) I would never have guessed, even though I know you are thoroughly Francophile.

Here is a map of the Jean d'Arc complex trail across France: http://tinyurl.com/n7z4n3x

I can understand the English putting Joan on trial because they were at war with France. But the Burgundians were something else :(

The lass refused to submit to the authority of the Church, insisting on the supremacy of God over the pope, bishops & priests of the institutional church. No wonder the French Church demanded capital punishment.

agreed about the wax works. I am assuming they help the bus loads of school children get into character, as it were.

The detailed information about Joan of Arc's years on the road is remarkable. 60 assessors took 5 months to interrogate her in minute detail and their record is still complete. Ditto the evidence from her second (posthumous) trial.

Joan of Arc is surely one of history's most interesting characters. Her gender, her age and her military success all contribute to her legend.

But what if a "Joan of Arc" were to emerge today with talk of visions and commands from God? What if they were not Christian visions?

Makes you think. I hope.

I have heard a number of cogent explanations for Joan of Arc's beliefs and actions.
1. she really did have powerful sense of religious fervour and a deep trust in her beloved saints from an early age. Thus her visions were true revelations from God as to her path in life.
2. she was raised in a very large, rural family and when she started exhibiting psychotic symptoms at puberty, no-one could help her.
3. her visions were due to ergot poisoning from fermented rye bread.

In any case, medieval France had a religious tradition of peasant children who left their flocks and homes, and went ahead to carry out a mission from God. Now it would be very different, agreed.

a monstrous horror and I could not go anywhere near Rouen they should not even mention burning a girl alive let alone capitalise on it for tourists.

By putting her on trial for witchcraft and heresy (instead of eg spying for the enemy), the English-Burgundian forces wanted to undermine her importance with ordinary, God-fearing French citizens. Then the English-Burgundian forces could safely burn her at the stake, the punishment of choice for witchcraft and religious heresy.

The English-Burgundian forces were beastial :( But the memorials are not, I suspect, mainly for tourists.