I have examined the art and architecture of World War One in lect­ures and in this blog, with a focus on all the art forms that were so evocative of the tragedy of war – posters, shrines, cemeteries, portraits, war landscape paintings, sculpture, trench art objects and even royal gifts to the soldiers. We have examined the collections of the Imperial War Museum in London, Australian War Memorial in Canberra, Ballarat Arch and Avenue of Honour, Bendigo RSL Military Museum, Canadian War Museum in Ottawa, Commonwealth War Graves in Northern France, Park of the Australian Light Horse Brigade in Beersheba and every other place I could visit.

But I had never considered the role of cinema during WW1. My first question would be was the Australian cinema so full of prop­aganda that viewers had doubts about what they saw? Nich­olas Reeve's book The Power of Film Propaganda: Myth or Reality? traced the history of Government-sponsored film propaganda in off­icial British war films during WW1. He noted that "there is a clear relat­ionship between the chronology of changing audience attitudes towards the official films and the chronology of changing wartime public opinion. Film propaganda was the servant, not the master of the audience it sought to control". 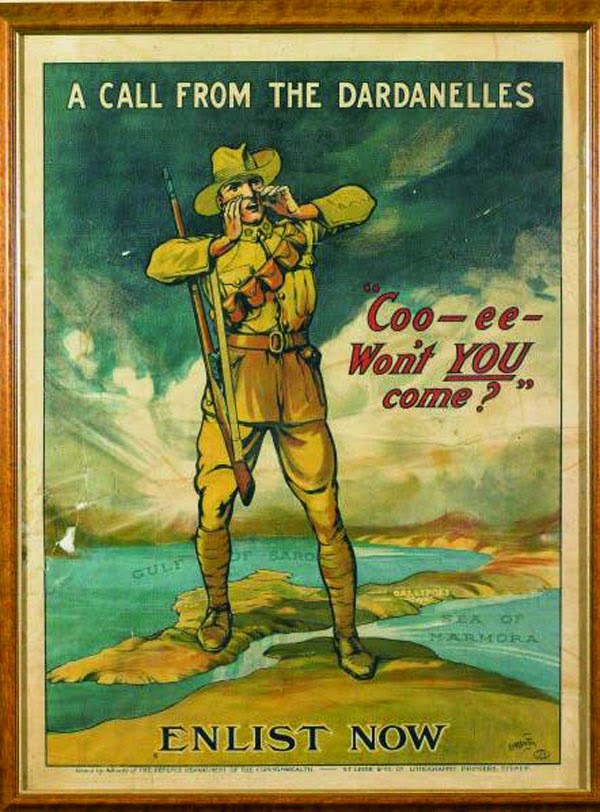 A recruiting poster that employed the theme of Australians fighting at Gallipoli to encourage men to enlist. Printed in 1915 by the Defence Department of the Commonwealth

Does his study help with our WW1 film propaganda, for there were interesting similarities and differences in the Australian experience. Daniel Reynaud said that as a British Domin­ion, Australian culture was heavily influenced by the imperial centre, so it is no surprise to find that its cinematic history has many parallels to that of Britain. But there were also distinct differences, due to the unique circumstances of the Australian wartime environment.

An outpouring of Imperial loyalist sentiment occurred at the outbreak of the war. Parliament passed the stringent War Precautions Act unopposed, which empowered Prime Minister Hughes later to develop a repressive censorship from August 1914 that choked any kind of opposition to the Government. And it was not just the Australian parliament that were keen on war. Other public institutions, such as the press and the pulpit, energetically orchestrated a campaign of popular support for the war. But this superficial national consensus appears to have broken down in Australia earlier than it did in Britain.

Now let me cite War Pictures: Australians at the Cinema 1914-18 in Melbourne. And Michael Bodey in The Australian Newspaper, 14th -15th March 2015. Bodey noted that Australia was quick to adapt to cinema. Australians made what is regarded as the first surviving full-length feature film The Story of the Kelly Gang, in 1906. By 1911, there were more than 100 permanent and temporary cinemas in Sydney, and in 1912 the first colour films were screened in Australia. So by the time World War One started in 1914, the cinema screen was the only tangible way to learn about and understand a war being fought 15,000 ks away. 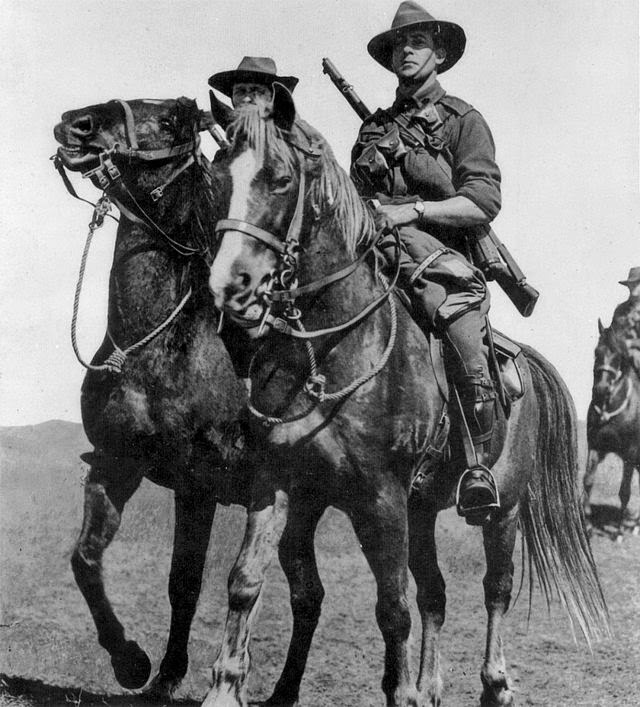 The War Pictures Exhibition shows extracts from the films Australians saw when they went to the cinema during the era. Between 1914 and 1918 Australian film prod­ucers made c54 feature films, yet only about 12 still exist in full. So 30 films, or pieces of film, were assembled from the NFSA archive and the Australian War Memorial; they give a sense of the spectacle, entertainment and information that cinema provided during the war.

During the early days of the war, most cinema items were short and focused on the facts e.g industrial films showing manufacturing processes and our boys heading off to war. Some were patriotic with­out being jingoistic, at least until feature films became part of the landscape around 1916. No-one will forget the DW Griffith epic Birth of a Nation. Another pure piece of entertainment included in the exhibition is Neptune’s Daught­er, starring Australia’s film star and swimmer Annette Kellerman. The hugely popular Charlie Chaplin also features.

One of the most striking to survive is The Hero of the Dardanelles, the first feat­ure film made about the Gallipoli landing, produced just months after the event. The producers re-created the landing on Sydney’s Tamarama Beach. This film was a turning point for audi­ences. By that time, so many people lost husbands and broth­ers that the impact was totally traumatic. A Hero of the Dardanelles dramat­ised the event with actual documentary footage, including images of the soldiers relaxing in Egypt at the pyramids, a later inspiration in Peter Weir’s Gallipoli. But even that film was lost for years before re-emerging in a composite film in 1928.

Note a British documentary made in 1916, The Battle of the Somme, that strongly affected cinema audiences. The Battle of the Somme was a global sensation, with 20 million paying customers in Britain alone; it stunned viewers as the most detailed and realistic representation of what was happening on the actual battlefields.

Despite the trauma, Australians continued to go to the cinema. By 1919 it was clearly the nation’s most popular entertainment, with admissions reaching 67.5 million at 750 picture theatres across the country. 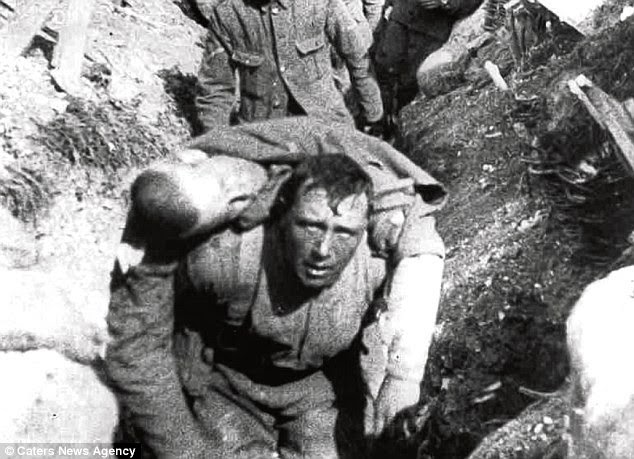 Real footage in The Battle of the Somme,
British film made in 1916

The exhibition cinema has been set up to replicate what our grandparents saw in 1915. The screening room has been changed into an old-fashioned picture palace with a foyer and video of a ticket seller in a booth. The hour-long footage includes contemporary advertisements & newsreels, accompanied by specially commissioned scores for piano and other instruments.

Visit War Pictures: Australians at the Cinema 1914-1918, the exhibition which combines the resources of the Australian Centre for the Moving Image and the National Film and Sound Archive of Australia. The free exhibition will show at ACMI until 12th July 2015. And read Daniel Reynaud’s excellent paper “The Effectiveness of Aust­ral­ian Film Propaganda for the War Effort 1914-1918”

I wonder if propaganda wasn't worse during the Vietnam war. At least by then the media weren't quite as compliant but still somewhat so in the early days.

Were letters and newspaper reports censored? How else could parents find out what was happening to their sons.

It seems that most of the population believed Australia should be supporting King and Country back in 1914. Those who weren't remained quiet... or faced the White Feather of Cowardice ladies in public spaces.

But you remember how angry Australians were by the late 1960s, particularly regarding conscription. Were our media accurately reflecting the divisions in Australian society and accurately reporting the Vietnam War?

At the outbreak of World War I in August 1914 the federal government introduced the War Precautions Act. The organisations were charged with censorship controls and civilian surveillance. The Censor's Office was administered through the Australian Army in Melbourne.

While the strategic rationale for censorship was to prevent military information falling into enemy hands, surveillance was increasingly directed towards monitoring those opposed to the war. The censorship authorities steamed open and read letters sent from the military front. Any information that was seen to be compromising was deleted.

Media censorship was extended to press coverage of both domestic and international events, and in terms of military developments was closely aligned to propaganda campaigns that actively promoted the Allied forces.

Hello Hels, One of my favorite books is John DeForest's Miss Ravenel's Conversion from Secession to Loyalty. This was supposed to be one of the first books to realistically portray what the life of a soldier (in the case the U.S. Civil War) was really like--the marching, waiting, and so forth, and not concentrating on heart-stopping or tear-jerking moments of the pitch of battle. Of course, just from the title we know what side DeForest is on, but still this is no simple propagandistic display.
--Jim

you offered an interesting comparison. The Introduction to the book acknowledges that Harpers had to promise not to publish the horror in their family magazine but in book form.

Even so, the Introduction says, it was an unfortunate moment to be discussing war. Since the book was published at a time the bereaved were looking for comfort, those who wished to still read about battles wanted them tidied up for the drawing room. And more - the details of people and places were fictionalised beyond recognition.

many thanks for the item on cinema in WWI. Nothing really to do with it, but I wondered if you had seen Lutyens And The Great War. I've always been a Lutyens nutter and took a chance by getting it from Amazon. It sounds dull but was absolutely fascinating, dealing not only with the actual designs, but with the developments, arguments, outside pressures etc. It covers the actual cemeteries, memorials in the UK and the rest of the Empire.

Lutyens was in a great position to influence how the War To End All Wars was memorialised. You could not have found a better subject for this subject than Lutyens.

Thanks for reminding me about this- I'd written 'ACMI' on the calendar for April and May and couldn't remember why! I looked at the ACMI site where they have a small (VERY small!) trailer that begins by reminding women to remove their hats, in a similar way that we are reminded to turn off our phones today.

agreed. Forgetting is not just a sign of advancing middle age. There needs to be more advertising of important exhibitions like this. I asked my students about War Pictures and no-one knew about it.