From Aleppo to Jerusalem: saving synagogue art and architecture

The main synagogue in Aleppo Syria was built in the Byzantine period. Damaged in the Mongol sack of Aleppo in 1400, it was later expanded and modernised. With the arrival of the Sephardi Jews in Aleppo in the C16th, a wing on the eastern side of the main courtyard was built, facing Jerusalem. In a central spacious courtyard, surrounded by porticoes, was a raised and covered reader's platform around which the congregation sat.

The Aleppo Jewish community (10,200) was not huge in 1900....but it was scholarly, successful in trading and well integrated into city life. When they needed more space to pray collectively, an adjacent courtyard was used as an open-air synagogue in the summertime. Only the Holy Ark had to remain covered by a roof at all times.This lovely Aleppo synagogue remained essentially unchanged until it was looted and burned in the riots of 1947.

In 1901, far away in Ottoman Jerusalem, members of the Ades family funded the construction of a synagogue for Jews who had emigrated from Aleppo. It was built off an alleyway near the open-air market of Mahaneh Yehuda, a neighbourhood where synagogues were typically tiny. The Ades Synagogue was no bigger. 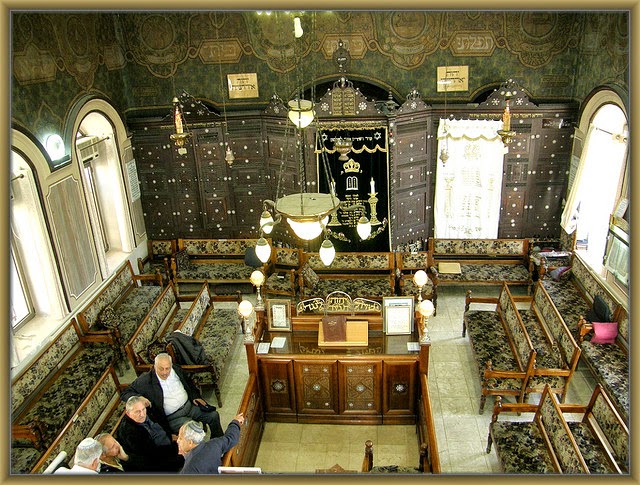 The woodwork inside the Ades Synagogue was intricate Damascene carpentry inlaid with mother-of-pearl, a reminder of the community’s Aleppo home. The benches were not arranged facing the front, as in European synagogues; Aleppo worshipers faced the small central platform where the cantor stood and where the Torah was read. Very social; very Middle Eastern.

After a few years the synagogue’s leaders made the decision to decorate the walls. So they invited an artist to do the work, but he was not from Syria and was not affiliated with any of the city’s religious communities. Matti Friedman wrote at length about young Yaakov Stark; he had moved from Galicia to Jerusalem in 1905, along with the many Jewish idealists making their way into Turkish Palestine back then. Stark was an early member of the Bezalel Art School, which was just down the street from the synagogue. He earned a meagre living drawing postcards and providing magazine illustrations. He was penniless most of the time; even the Ades project was never properly funded.

The Aleppo Jews were open-minded about their art work. Which was just as well. Stark believed aesthetics to be indivisible from the ideas of Zionism; there was no point in returning to the Land of Israel to create something ugly. Stark covered the interior with a combination of traditional Biblical motifs and the new icons of the Zionist movement, woven together like a mosaic in shades of blue and green. He included biblical passages, using a Hebrew font that mixed Arabic calligraphy with Art Nouveau. 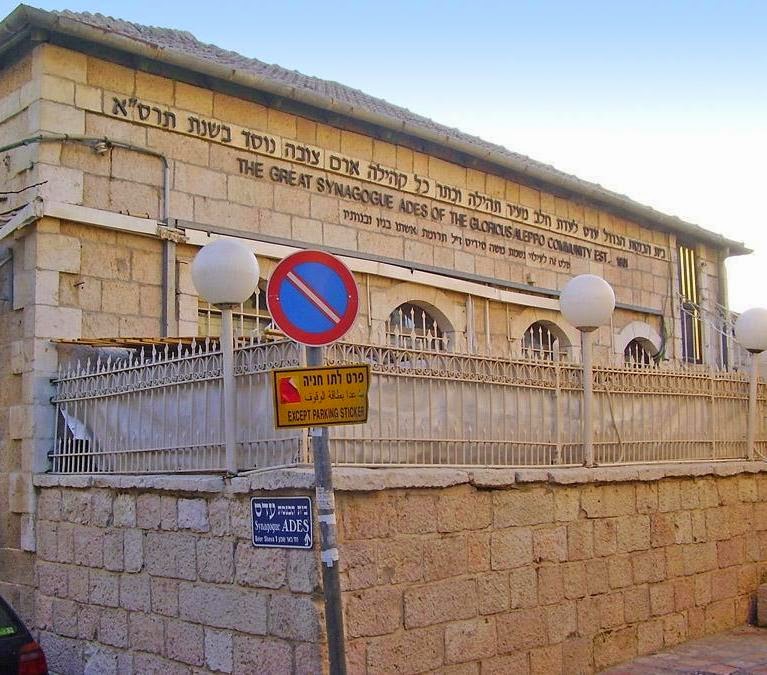 
Stark spent years on the synagogue murals, completing them in 1912. Two years later, in 1914, world war broke out. Tourism to the Holy Land dried up, and with it orders for art work. Stark found employment painting houses, or lived on charity. He often could not pay rent for the room he shared with his family. In 1915, three years after completing the murals, he contracted pneumonia and died; he was 34 and largely unknown.

Almost 100 years later, in 2009, art historian Nirit Shalev-Khalifa was walking through the synagogue’s iron gate and found a workman was covering the murals with a modern version of Stark’s original in shiny acrylic. The glue used by the workman posed an immediate danger to the murals. Experts from the Israel Museum and the Ben-Zvi Institute, created to preserve the heritage of Middle Eastern Jewry, became involved... but with­out success. Ades Synagogue was private property!

Later an official in charge of historic buildings at the Jerusalem municip­ality happened upon a forgotten by-law passed in the 1980s, preserv­ing 42 buildings inside and out. One of them was the Ades synagogue. The art experts went to court, and this time they succeeded.

Ades is not like a synagogue on the Western model, opening at set prayer times. Rather it is like a mosque in an Islamic city — a place that is always open, where citizens can find a conversation, a drink, some quiet time. The Rabbi is one of the old Aleppo Jewish families. And other things haven’t changed either. The synagogue still chants the Sabbath pray­ers according to the maqam melodies of Arab music. Ades is considered the most important centre for the Jewish liturgy of Aleppo.

The prime minister’s office in charge of heritage sites ended up paying for a professional restoration of the murals, which lasted two years. The ceiling remains to be restored. 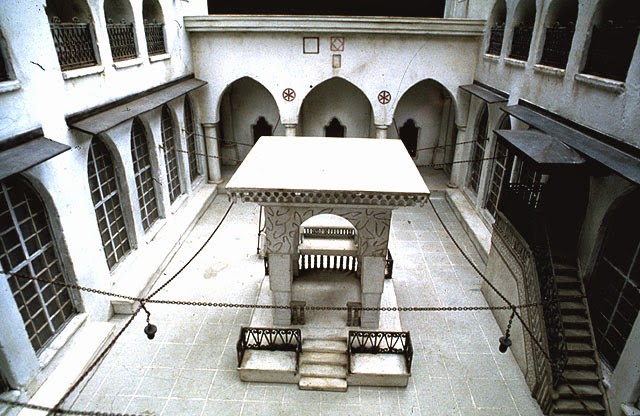 The courtyard of the Great Synagogue of Aleppo.
An exact model at the Beit Hatfutsot museum in Tel Aviv

The Aleppo Codex was an important manuscript of the Bible, written in Hebrew and bound in the C10th. During the First Crusade (1096-99), its home in a Jerusalem synagogue was looted but thankfully the codex was safely taken to Egypt and protected. I am not sure exactly how the codex was transferred from Egypt to Syria in 1375, but Aleppo did become its permanent home. Aleppo's Jews believed that if their precious Bible was destroyed, it would coincide with the destruction of their long and historic community. [Noone knew back then that the entire city of Aleppo would be bombed and destroyed in the Syrian Civil War during 2013 and 2014].

Then the unthinkable happened.. in 1947. Almost 600 years after the codex was secured in the underground safe in the Central Synagogue of Aleppo, anti-Semitic riots burned the city's houses and synagogues. Many of the codex's pages were burned beyond saving, but the rest of the pages were taken out of Syria and sent to Jerusalem for preservation.

Today visitors can see the surviving parts of the Aleppo Codex in the Shrine of the Book, next to the Israel Museum in Jerusalem. The underground building evokes the caves in which the Dead Sea scrolls were found. And the white dome, a sanctuary whose shape was inspired by the lids of the jars in which the scrolls were found, is the only visible part above ground. The Aleppo Codex will never be destroyed by looting, burning mobs again. 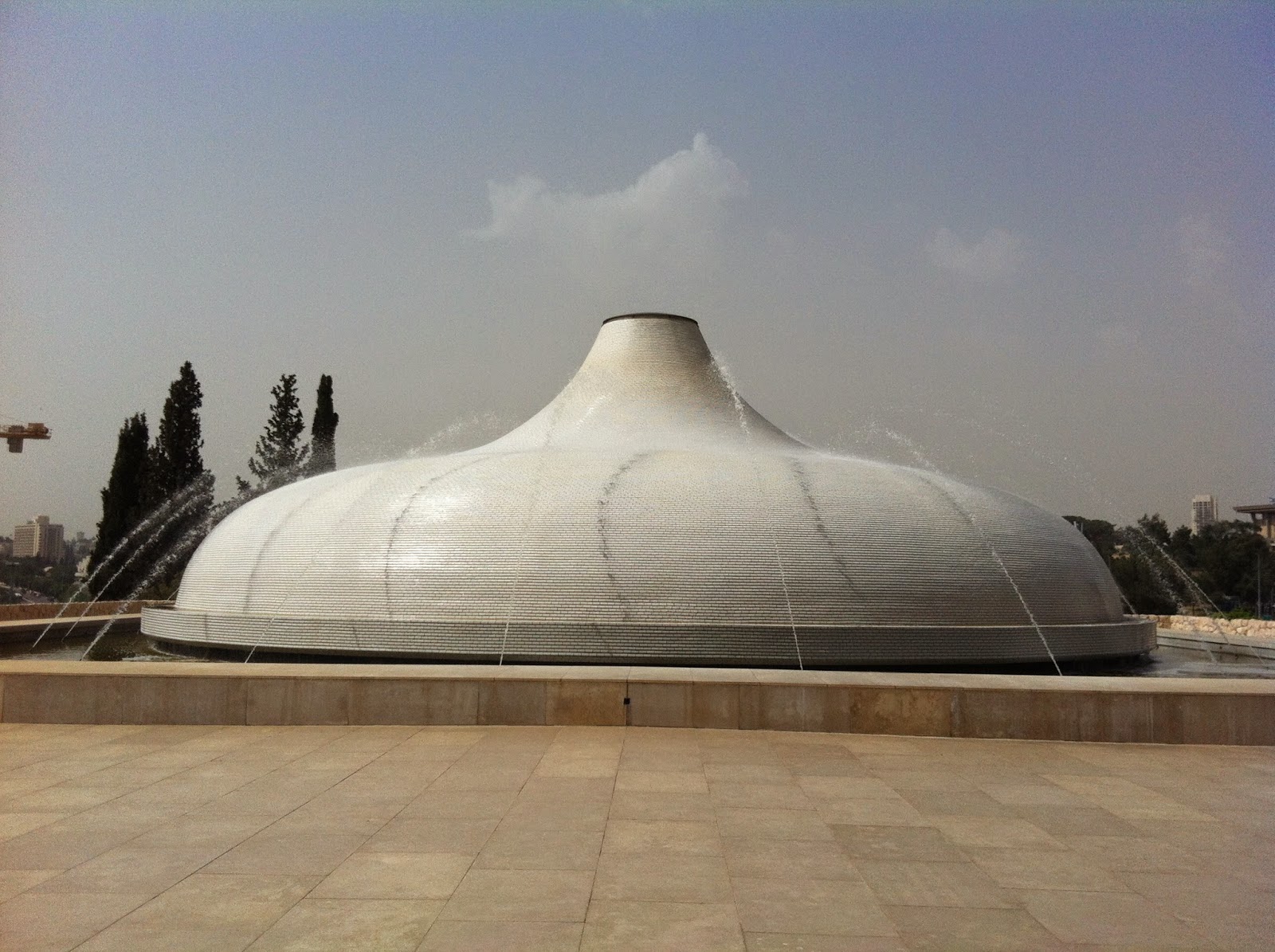 Shrine of the Book, Jerusalem

Aleppo must have been a bustling town before Assad. Imagine the endless streets of covered markets in Old City and the splendid merchants houses. I doubt if there are gorgeous silks and other imported luxuries now.

The Jews from Aleppo, Syria said...

A Global Community: The Jews from Aleppo, Syria, written by Walter Zenner, is the first scholarly interpretation of the historical experience of this community in Syria.Then he examines the other places to which Aleppan Jewry have immigrated.

Beautiful Aleppo now looks like Berlin after the war... everything has been reduced to rubble. Can the city ever be rebuilt?

excellent reference, thank you. I was concentrating on Syria and Israel, so a few of the chapters weren't quite as relevant to this blog post.

Hello Hels, As one who often treasures the merest fragments that survive from the architectural, artistic and cultural endeavors of every civilization, while not necessarily agreeing with their dogmas, I am amazed that this type of vandalism and destruction still goes on at such a wholesale level. I can understand the great security measures undertaken to protect rare materials from various hazards,
but let's face it, the fortress/bunker-like Shrine of the Book was needed to protect the Aleppo codex primarily from hate-based human depredations.

I felt the same way about the ISIS thugs who smashed the 3,000-year-old artworks to pieces in the Mosul museum. Those were the heart and soul of civilisation and history. Ditto the burning of 10,000 precious books at the Mosul Public Library.

What has the world come to?