Historically Manitoba had been at the heart of Rupert's Land, owned by the Hudson's Bay Company. Shortly after Manitoba was admitted into Confed­er­ation with three other Canadian provinces in 1870, ex­tensive plans for the new province’s colonisation were urgently needed. This was because Manitoba, unlike Ontario, Quebec and the Maritimes, did not have a long history of European settle­ment. It was known, for example, that Manitoba’s climate was not always favourable for the cultivation of winter wheat, so the new colony badly needed skilled farmers.

And there had been anot­her th­reat: if the Canadian Prairies were not qu­ic­kly populat­ed, the western provinces could be easily invaded by from the south and absorbed into the USA. The Ci­vil War in the USA (1861-5) only made Canadians even more anxious. To pre­c­l­ude the USA’s annexation of Manitoba, the Canad­ian government had to rev up their programme of attracting new farmer imm­ig­rants to the Prairies. As we will see, 200,000+ farmers, mainly Ukrain­ians, Russians and Scots, were settled in the area between 1870 and 1925.

The Homestead Act of 1872 had standard requirements for settlers in the Prairies: that the homesteader would 1. reside on the claimed land for at least six months of the year; 2. establish a permanent residence and 3. break 40 acres within the first three years. Furthermore a second adjacent quarter could be reserved as a pre-emption, for a total of 320 acres. Thus many of the original farms in Manitoba were settled as Homesteads.

The timing was perfect. In the 1870s the first shipment of Manitoba grain reached Great Britain and the market took notice. Canadian agents visited many Russian communities in the early 1870s and offered land-hun­gry workers the opport­un­ity to farm in western Canada. Russian Mennonites were targeted because Mennonites were seen as hard working and sober farmers. The Can­adian Department of Agriculture set aside special land res­er­ves for their settle­ments and awarded full privil­eges to pra­ctise their religion and to est­ablish their own schools. Between 1874-9 en­t­ire Mennonite villages were transplan­ted from the Russian steppes to southern Manitoba: 18,000 Mennonite farmers arrived before WW1 and another 20,000 arrived after the war. 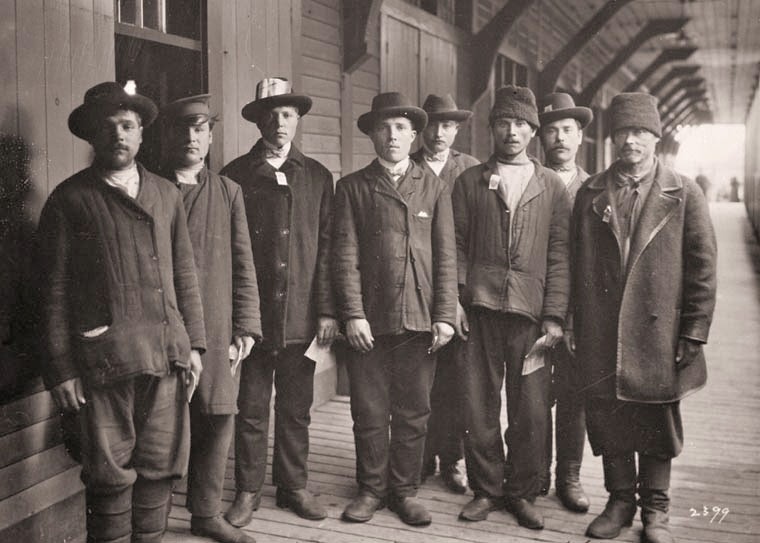 Two groups of hopeful immigrants arrive at the CPR station in Winnipeg. 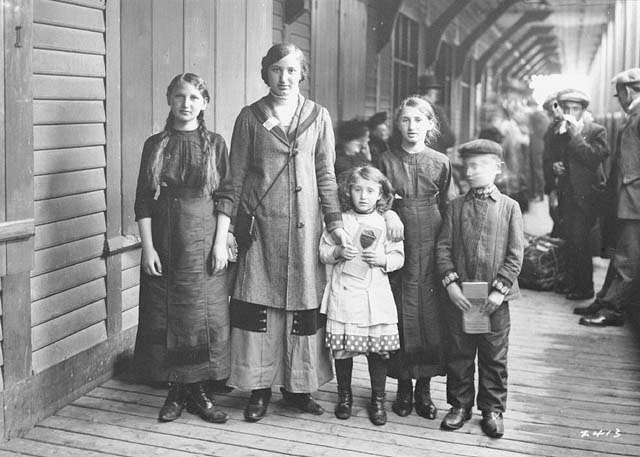 By 1891 Canada's Minister of the Interior was encouraging Ukrainians from the old Austro-Hungarian Empire to settle, since he too wanted new agricultural immigrants to populate the Prairies. Manitoba welcomed 167,000 Ukrainians (and Saskatchewan welcomed 130,000 Ukrainians) before and after WW1.

But it was not easy. Some early immigrants arrived on foot to stake a claim to land, some arrived with a team of oxen and some had bought a team of horses. While the land had been surveyed and the survey had left room for road allowances, there were no towns, trails instead of roads, no bridges and no railways. After settlers had taken care of the family’s basic needs, schools and church­es became a first priority. They wanted to replicate Ukraine's wooden churches, and over time they created the decorative Prairie-cathedral style. People loved the distinctive pear-shaped church domes of Ukrainian and Russian churches.

Local government was soon required to build roads, bridges and community infrastructure. Businesses became established in towns to look after the needs of early citizens. Agricultural societies were soon formed in most rural communities, to educated new farmers on improved farming methods and on improving livestock production.

Jewish Russians were also recruited. But land had previously been assigned only for Mennonites, Icelanders, Scottish settlers and French Canadians; no land had been allotted to entice Jewish immigrants. So from 1887 on, land was quickly assigned to Jewish farm settlers SE of Winnipeg, and after the turn of the century, to the north of Winnipeg. In total 19,000 Russian Jews emigrated to Winnipeg and surrounding towns in the 1900-25 era, including my mother's 8 first cousins. Fourteen synag­ogues were built in the city that came to be called New Jerusalem.

There were other groups of North European immigrants. From 1870–WW1, for example, at least 100,000 juvenile migrants were sent to rural Canada from Great Britain during the child emigration movement. But in which Canadian provinces were they settled? In 1875 Icelanders started arriving in Lake Winnipeg. With the support of the Governor General, Lord Dufferin, who had been impressed by Icelander dedication to farming and fishing, their new colony called New Iceland grew bigger and bigger. Once again we have to ask how many Icelandish immigrants there were. 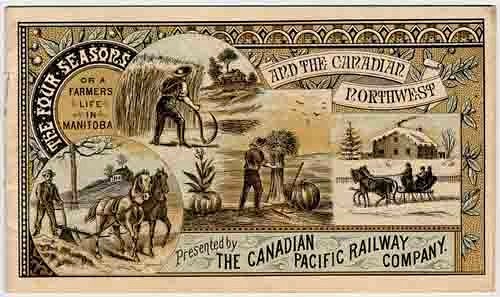 A Canadian immigration poster from 1910, promising immigrants to Manitoba a lovely life.

Pre-WW1, the population of the entire Canadian nation rose to 7 million. The Prairie wheat boom created: provincial trains, grain elevators, ships and the two Canada railways that crossed from coast to coast. In turn, the Canadian Pacific Railroad Company actively promoted Canada as a destination for immigrants, ever since it had been allocated 25 million acres between Winnipeg and the Rockies. It needed a steady flow of Scot­tish citizens to top up the population across a vast area. As they had done in Vilna and Kiev, Canadian agents now stood on railway stations across Scotland, handing out flyers to potential recruits. A peak in Scot­tish immigration was reached in the 1920s, with 363,000 leaving for the USA and Canada in that decade.

Before WW1, Winnipeg had improbably become the third largest city in Canada, and remained so until Vancouver became bigger later on. In fact Prairie pop­ulation had grown so quickly that by the turn of the century, the two new provinces of Alberta and Sask­at­chewan needed to be created. This was formally and peacefully achieved in 1905. And since wheat was one of the nation’s major trading commodity, Winnipeg expanded as an entrepôt (duty free trading centre).

In those years, the Prairies became an import­ant underpinning to Canada’s booming economy, largely due to the very successful immigration programme. Farming families from Northern Europe were offered a happier, healthier life and Winnipeg thrived. Win win!

There are so many historical twists and turns in relation to immigration. It is incredible to note how many thousands of families left their home countries to settle into a new life, thereby contributing to the economic wealth of their adopted countries. And then, for many they become unwelcome immigrants 'stealing' the jobs of the indigenous population. Is it ever so?

Sometimes the host nation turns around and bites the very immigrants they so warmly welcomed earlier. And not always because of stealing locals' jobs.

In WW1 Australia interned all its citizens of German origin, even though many of them had arrived to set up our vineyards back in the late 19th century. By 1914, many could not even remember what Germany was like. Or the Austro-Hungarian Empire.

In a nation of immigrants, what fools we were :(

*nod* I am not surprised.

When my mother's family left the Ukrainian part of Russia, half went to Melbourne and half went to Winnipeg. We still have family reunions every four years, in Canada or Australia.

My pleasure. Have you spent time in Winnipeg? I have visited twice and found very generous and hospitable family members.