King Charles II was the personal patron of Sir Christopher Wren (1632-1723), the architect who helped rebuild London after the 1666 Great Fire. Whatever one thinks of the later Stuarts, no-one can accuse Charles II of shirking his responsibilities as a builder of arguably the greatest city on earth.

By 1673 it was becoming increasingly apparent that some soldiers were no longer fit for service. Perhaps King Charles II was truly anxious about the lads who had served their nation and had come home badly wounded. Or perhaps he was humiliated that France had a wond­erful facility for ex-servicemen while Britain did not. Without a doubt when King Louis XIV commissioned Hôtel des Invalides in the 7th arrondissement of Paris in 1671, Les Invalides became the envy of royal families everywhere. By 1678, wounded French soldiers had a fine place to live. 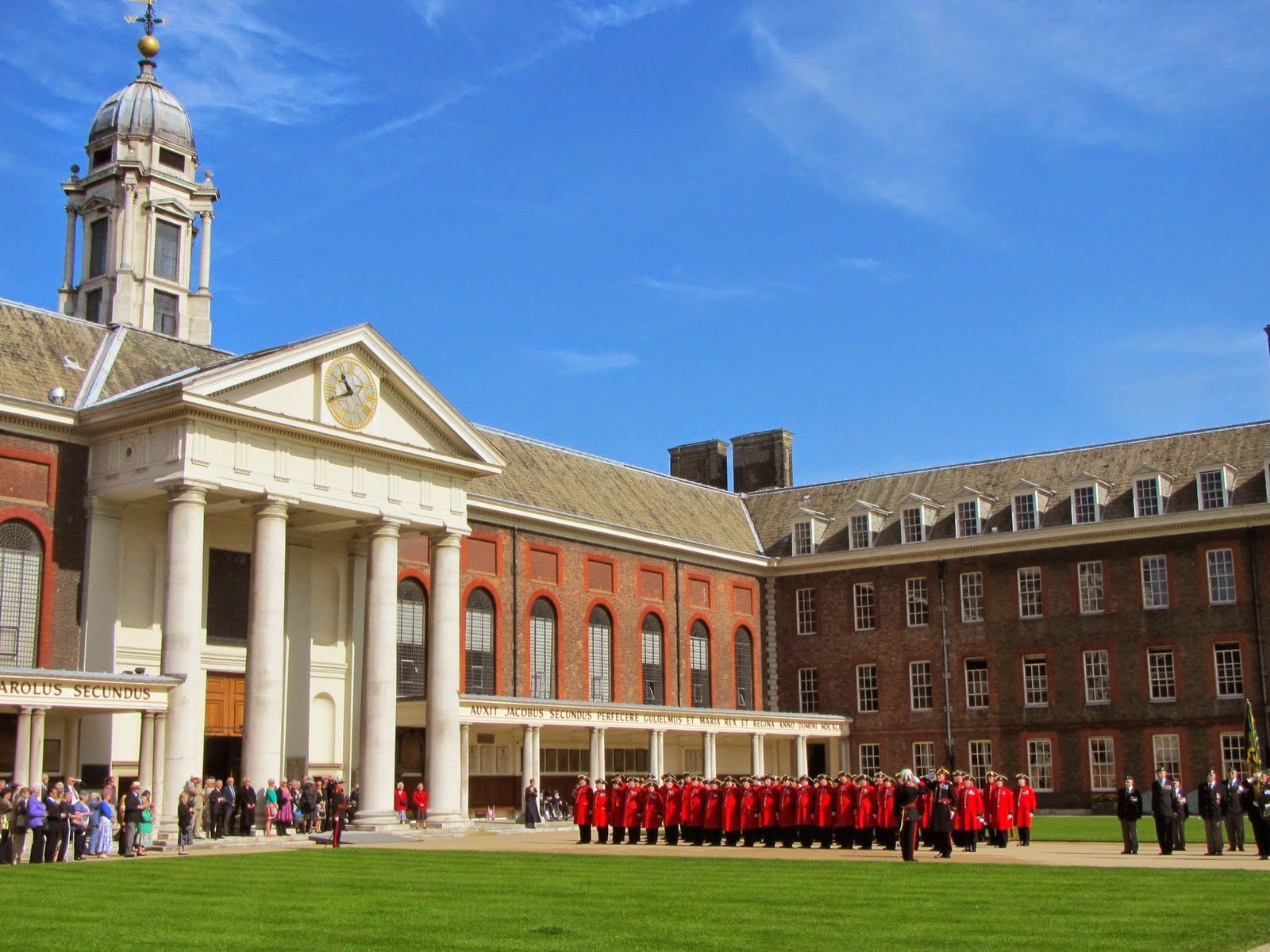 The pensioners, in red uniforms, parade in front of the Royal Hospital Chelsea

Examine the dates. In 1681, King Charles II issued a Royal Warrant authorising the building of the Royal Hospital Chelsea to care for those broken by age or war. Sir Christopher Wren was commissioned to design and erect the building and Sir Stephen Fox was commissioned to secure the funds necessary to see the Chelsea Hospital through to completion. The huge site, adjacent to the River Thames in rural-ish Chelsea, was chosen because of its green landscape and healthy air. The new hospital was to stand on the site of an earlier building which had already been pulled down - Theological College, founded by King James I.

King Charles died in 1685 but the work continued under the next two rulers. 1692 saw the first Chelsea Pensioners admitted into residence and it did not take long before the full complement of 476 men had beds. An earlier bronze statue of Charles II, created by Grinling Gibbons in 1676, was placed in the central court of the complex in time to greet the new residents. This three sided courtyard, which to my eyes looked quite mon­astic and severe, was made from ordinary bricks. 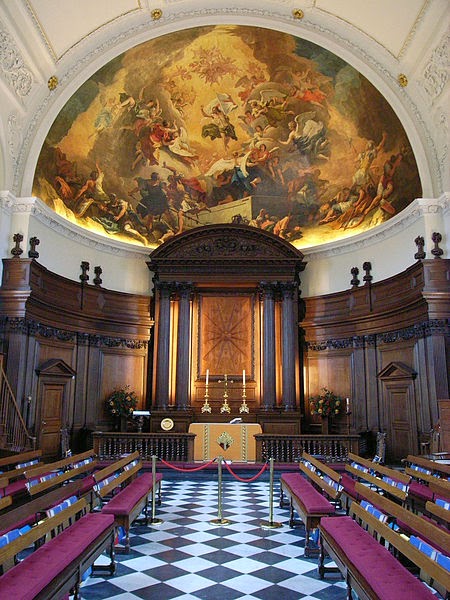 The four storey wings on both sides of the central court were designed as the Chelsea Pensioners' living quarters, called the long wards. The original berths, as designed by Wren, were tiny but the oak panelling was smart. Gas lighting was not installed in the long wards until 1854.

How ironic that the first intake were soldiers who survived the Battle of Sedgemoor which had occurred in July 1685 in Somerset. This was the final battle of the Monmouth Rebellion and followed a series of skirmishes around the SW provinces between the forces of James Scott, 1st Duke of Monmouth and troops loyal to King James II. At least the old soldiers looked very smart, wearing a dis­tinctive red uniform and black hat. [Tod­ay the residents still wear uniforms, scarlet in summer, dark blue in winter, and ceremonial tricorn hats].

The Chelsea Hospital had to be a self-suffic­ient community, so it had res­idential facil­it­ies, dining rooms, veg­etable gardens and its own brew­ery. The chapel was designed by Sir Christopher Wren and consecrated in August 1691; services were held twice daily to which all the pensioners were warmly invited. Just as the King had a duty of care and honour to the ex-servicemen, so the ex-servicemen had a duty of care to God. Appropriately a fine version of the Resurrection appeared in the half dome of the chapel apse, painted by two Italian artists.

The Great Hall with its oak carving was also designed by Sir Christopher Wren, originally as a dining hall. Over the decades, the Chelsea pensioners started dining in the wards so the Great Hall began to be used for leisure time pursuits. Clearly Chelsea was a huge success. The proud Army ex-servicemen could remain in the complex until they died. 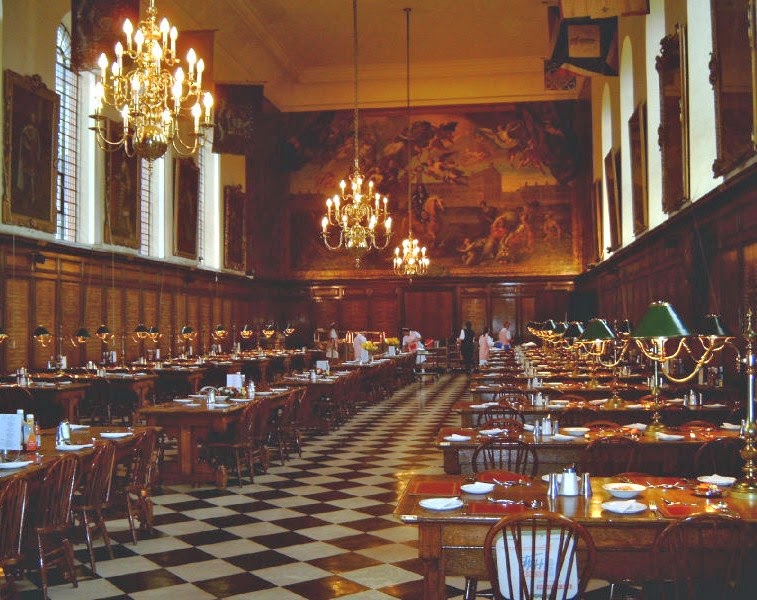 But progress is never guaranteed. Wren's very special formal gard­ens, which provided a vista from the Royal Hospital to the River Th­ames and included gazebos and summer houses, were all dem­ol­ished when the Chelsea Embankment was constructed. The present Rane­lagh Gardens were laid out by John Gibson in c1860. Even the new Infirm­ary building, built by Sir John Soane in 1809 for 80 patients, was bombed by German planes and had to be pulled down. I suppose it is of some comfort that the site of the bombed-out Infirmary has now been re-purposed as the National Army Museum.

It is unfortunate that the Royal Hospital Chelsea is no longer owned by the government or by the army. The ex-servicemen are nearly back to where they were pre-1692 i.e dependent on their own army pensions and on charity from others. And until recently the pensioners still lived in the original carved oak berths off the same same oak long wards where ex-servicemen from the Jacobite Rising of 1715 once slept through the night. Wren made the original berths 6 x 6 ft and it was not until after WW2 that the berths were enlarged to 9 x 9 ft. But at last there is some progress. When the current renovations are complete, each pensioner will have his or her own small living-room and a toilet. 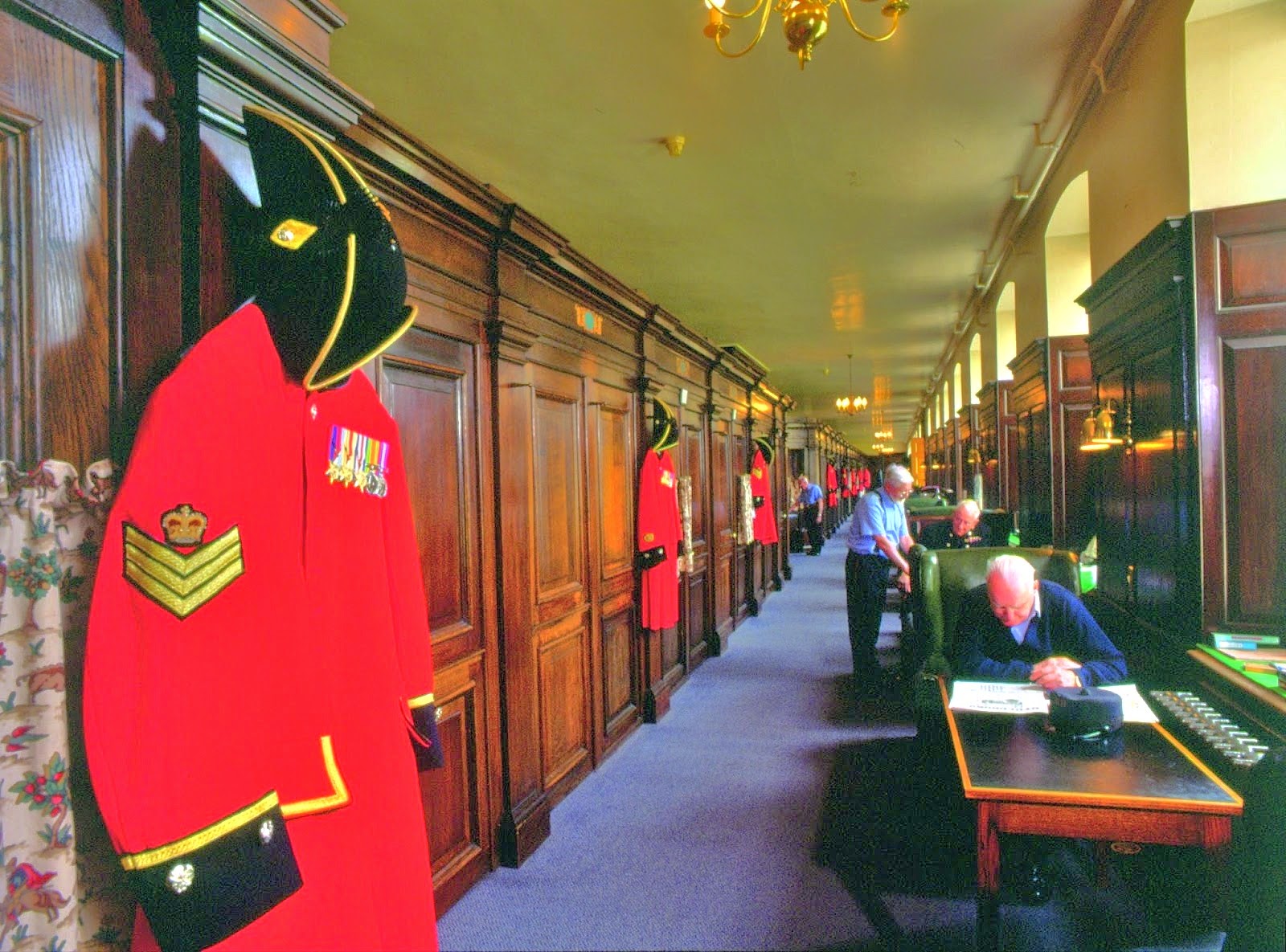 one of Christopher Wren's long wards
Doors on the left open into the individual berths for sleeping
Chairs and tables on the right provide reading and writing space for each resident.

In such a large and expensive building, why was so little space allocated to the Chelsea Pensioners' private berths?

Imagine thanking the men on behalf of the grateful nation, then privatising the service set up to show the nation's gratitude. What next, send the men to poor houses?

The most splendid architecture and decorative arts were reserved for the shared spaces eg the dining room. I imagine the managers wanted the Pensioners to participate in lots of activities and not to lurk behind their closed door.

That said, I have cupboards bigger than 6 x 6'

The Royal Hospital Chelsea is now privately owned although the Government gives a grant to assist with running costs. Now the hospital lives off residents' fees and public donations.

Perhaps it was the only way of funding expansion and modernisation. But what a way to thank those brave men and women :(

The Royal Horticultural Society's Spring Show is to be held this year in the Chelsea Hospital grounds, instead of the Gardens of the Inner Temple. For some years past the Temple Show has been much overcrowded and the Society wisely determined to move to Chelsea on the site where the International Horticultural Exhibition was held last year, and where visitors will be enabled to see the exhibits in comfort. A record number of entries have been received and the show will undoubtedly be the best the Society has ever held.

Interesting! I had no idea where the Chelsea Flower Show had been before it moved to the Royal Chelsea Hospital nor did I realise in which year it moved. 1913!

I didn't know about this place Hels. Thank you for sharing it! I wonder who gets to stay there these days? No doubt the most wealthy of ex-servicemen.

"Anyone who is over 65 and has served as a regular soldier, who has no dependent spouse or family, who finds themselves in need and who is "of good character" can apply to become one of the world famous Chelsea Pensioners". However no new applications are being accepted just now because of the reservations.

At any other time it costs the Pensioner's full Army Service Pension or War Disability Pension, or £175 per week.

I warmly recommend a visit.

It is such a beautiful little Wren chapel.

I expected to love the chapel and I did. What I did not expect was the silver. The altar plate was made in my all-time favourite era (1687-8) - the alms dish, salver, three flagons, four chalices and patens, and a pair of candlesticks. I was in love!

Royal Chelsea Hospital in London was built because it was obvious that some soldiers were no longer fit for service and would not have another place to stay that could honour their contribution to the nation. Would you say that Paradise Retirement Village was offering a similar sort of service to ex-servicemen?