Arcadian Adelaide - too much church, not enough humility

Thistle Anderson was born in 1878 to Scottish parents who migrated to Melbourne when she was a young lass. She joined JC Williamson’s touring theatre company which travelled to Adelaide in 1900. Then she travelled with the company on to New Zealand and Britain. In December 1901, while still in the UK, she married Herbert Fisher, an Adelaide stockbroker. She enjoyed a suitable social life in London and was presented at court.


Arcadian Adelaide is a slim book that was written by Thistle in 1905 and published by Modern Printing. In Adelaide this year (2014), I read a wonderful analysis of the book and the events surrounding its publication.

Dr Kiera Kindsey wrote that the Edwardian Age is often depicted as a time of prosperity and innocence, a peaceful interval between the brutality of Victorian industrialism and the total devastation of WWI. Many who survived the carnage of the Great War recalled how the sun appeared to cast an enchanted light upon what they then assumed to be the eternal garden party of the British Empire.

The languid lull of the age indulged a new sense of South Australian exceptionalism, particularly in Adelaide. The early decades of European settlement had been influenced by social reformers dedicated to making their colony better planned, better managed and much more respectable than the garish convict outpost of Sydney and vulgar gold-rush town of Melbourne. The years that followed Federation in 1901 witnessed a swing towards smug conservatism in South Australia by people who banned beaches and restricted alcohol on religious grounds. Since the 19th century Adelaide had in any case been called the City of Churches, but was that because of so many ecclesiastical buildings or was it because of the community's conservative religious values? 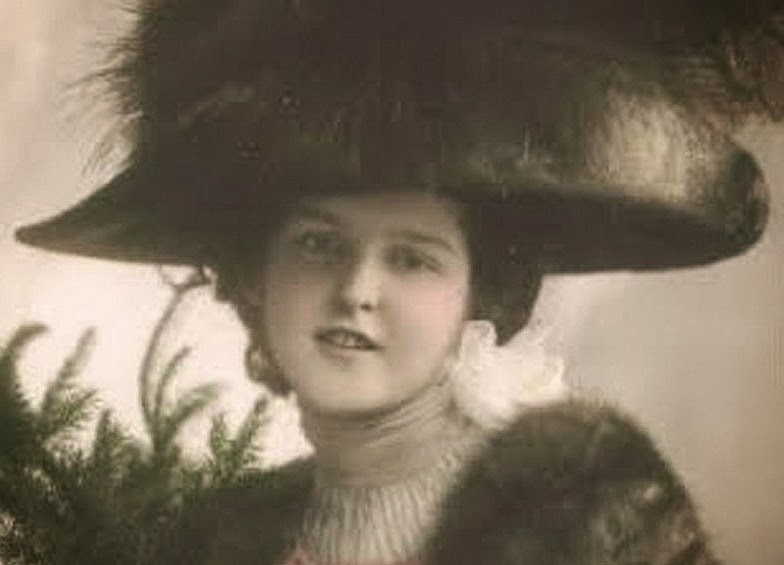 Into this world of pious Adelaide respectability entered Thistle Anderson. This well-read, much-travelled woman returned home with her respectable husband, yet she refused to conceal her contempt for the narrow-minded church-focus of Adelaide society. Her book Arcadian Adelaide, which she published in 1905, energetically ridiculed Adelaide’s ‘self-constituted halo of excessive virtue’.

Contrary to the rapturous praise of those who had never left this "isolated town backing onto a great expanse of desert", Thistle had seen the world and confidently declared to the villagers “your hills are not the greenest, or your morals the cleanest, or your shops the brightest”. She sneered at ordinary pubs, sordid hotels, dirty lodging rooms and a tram system that brutalised horses, but it was Adelaide’s false piety that most infuriated Thistle.

Despite their assertions of moral purity, Thistle insisted that brothels, prostitutes, opium dens and drunkards were significantly more numerous in Adelaide than the more densely populated Melbourne. And aiming where it would inflict the gravest injury, Thistle declared the local Adelaide wines were the worst ever made!!! A low blow, indeed.

Thistle had drawn blood, and within days all of Adelaide was rushing out to buy her book, then raging at what they read within. Outraged by what one commentator condemned as ‘forty pages of forty poison hat pins’, gossip writers responded to Thistle’s barbs by inflecting their newspaper columns with thinly veiled and genteel malice. Of course this ensured the book became a best seller, enjoying 10 impressions in the first year of publication.

I love the fact that Arcadian Adelaide: John Norton's Reply to Thistle Anderson was published in Adelaide by C.W. Chandler, also in 1905. 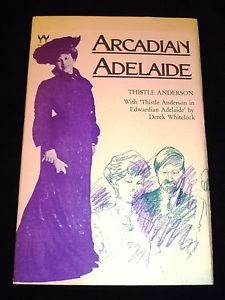 After her first husband died in 1912, Thistle Anderson left Adelaide to enjoy the liberal pleasures of Paris. Some 20 years later, in 1932, as South Australians struggled with the crippling humiliation of the Great Depression, the now-Mrs Thistle Clavering Sherwin was spotted again at the greyhound races in Adelaide. She had been a French and English journalist all her life and was back home to report upon the dog races and other sports.

Thistle confessed in the newspaper of record in Adelaide (The Mail, Saturday 24th September 1932) that she had never realised how beautiful her home town really was. Perhaps the horrors of war and the hardship of the Great Depression had humbled Adelaide, or at least softened its sanctim­on­ious edges. It is equally possible that after a glut of European sophistication and suffering during WW1, our lady of the poisoned hatpin was better placed to appreciate the simple delights that her caustic cleverness had previously obscured.

But had Adelaide forgiven Thistle? In the 1985 edition of her book, the publishers wrote Thistle Anderson/Mrs Herbert Fisher was an actress, poet and satirist who penned her critique of Adelaide in 1905 with sections on the Holy Village, living accommodations, tram, men, women, lesser animals, manners & customs, industries and redeeming features. Derek Whitelock's essay nicely contextualised her satire.

There are two references I can think of that might make “poisoned hat pins” a telling comment against any Edwardian woman (in Adelaide or elsewhere). Sherlock Holmes and the Misadventure of the Poisoned Hatpin exposed an attack that was silent, painful, invisible and ultimately deadly for the victim. It is ironic that in the Sherlock Holmes story, The Adventure of the Abbey Grange 1904, the evil lord of the manor stabbed his wife with her own hatpin.

Secondly in the late C19th and into the new century, violent self-defence was thought of as uncivilised and non-British. So men became very afraid that man-hating-suffragettes would use a method of attacking men so secretive that the police couldn't stop it. This was plausible back then; women’s hats were huge, and the pins were long, thick and potentially lethal. Edwardian newspapers played up the danger of Rampant Suffrag­ettes, taking great pleasure writing stories about hatpin suicides, accid­ents and murders. So legislation really WAS brought in to ban long hat pins from public places, especially trams, courts and prisons, in the UK, Australia and the USA!!

I realise that no-one wants to see their own family, city or church disparaged by a silly young woman who they saw as critical, caustic and anti-Church. Thistle Anderson certainly should have been less biting and more thoughtful in her book. And she should not have attacked Adelaide’s wines, a topic she knew absolutely nothing about. But did Thistle Anderson deserve to be portrayed as an uncontrollable suff­ragette, silently and invisibly stabbing to death a beautiful, peaceful city that had just tried to maintain a high moral standard? Of course not.

South Australia couldn't have been too conservative. I think it was one of the first states where women gained the vote.

How very intriguing all of this is! Clearly a woman to arouse all manner of emotions with, of course, her own agenda and own set of prejudices.

South Australian women won the vote and the right to stand for Parliament in 1895! So perhaps Adelaide was in some ways very radical. It was the first state in Australia to include women, and was second only to New Zealand in the world.

apart from the many articles this young journalist wrote for newspapers, I found a list of her published novels and books of poetry. Having only read the one book that I discussed in the post, I must still say the list looks impressive.

Hello Hels, I found Arcadian Adealide on-line, and am having a good time reading it. I love all writing that punctures pretense and sanctimony. A couple of American comparisons come to mind. Ambrose Bierce is more vitriolic, while S.J. Perelman has a lighter touch but is equally deft.
--Jim
PS: Here is the link to the download:
http://digital.slv.vic.gov.au/view/action/singleViewer.do?dvs=1396723508285~478&locale=en_US&metadata_object_ratio=10&show_metadata=true&preferred_usage_type=VIEW_MAIN&frameId=1&usePid1=true&usePid2=true

Any writing that tries to puncture pretence and sanctimony is likely to find a hostile reception amongst the pretentious and sanctimonious citizens.

Thistle Anderson was young, energetic and keen to travel, but I am certain she must have known how people were going to react. Otherwise why bother writing a book that wasn't filled with the usual rapturous praise?

I didn't get past that.

oh no 'Thistle Sherwin'.
Ita Buttrose is from Adelaide isn't she?

I can imagine that Thistle was an acceptable first name in Scotland, but if I were her parents, I would be calling my daughter something else in Australia - Daisy? Petunia? Daphne?

The first name is fine (I have a Daisy because it fit perfectly with our surname, and luckily she married a perfect-fit surname), but the symbiosis of the Thistle Fisher Sherwin was a lispers nightmare.

I collect real names of old AUS BMDs I come across while doing family trees. Lots of us were named Christmas Australia or Eureka in 1854. Philadelphia Pringe. Mossy Allnutt 1908 etc

I shall not be thinking I am too good for your blog now that I have been knighted by our PM, and Dame Annie ODyne conveys the same. :)

maternal g-g-gmother and parents landed 1853 SA, stayed with Milne relatives at Unley then moved on to Portland Vic. I am wearing her gold chain as I type.
Another old name I love 'Fortunatus Fox' born Victoria 1855
x x

See the book The Tramways of Adelaide: Past, Present and Future. A Complete Illustrated and Historical Souvenir of the Adelaide Tramways from the inception of the Horse Trams to the inauguration of the present magnificent magnificent electric trolley car system.

I do hope you are able to find the book or a copy of it in some archives.
Good Luck with your search,
Yours Sincerely
Mymie Driver (nee Simpson)