Although a museum had been founded in The Hague as early as 1800, by 1863 the Amsterdam city fathers were keen to conduct a design contest for a state museum. When there was dissatisfaction with the submissions, a new contest was held a decade later and this time a winner was announced - Pierre Cuypers (1827-1921). His submission managed to combine two apparently incompatable styles, gothic and renaissance. 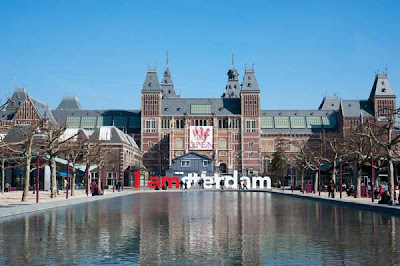 On both the interior and exterior, his building was richly decorated with allusions to the 17th century era when Dutch town planners, engineers, traders, artists and scientists ruled the world. Amsterdam's Rijksmuseum was opened to the cheer of local residents in July 1885 and soon became Holland’s biggest museum.

Naturally additions and changes were made to the grand building in the decades since 1885, particularly before and after World War Two.

In 2003 the architects were asked: to strip the building of its post-Cuypers additions and to restore Cuypers’ clear layout. To this end, I've been following the Rijksmuseum’s Renovation Blog. According to the current design, for example, the two inner court-yards which were added in the post-war years were broken open, creating a two-part Atrium linked by the open passageway.

At every stage during the renovations, the guiding theme was continue with Pierre Cuypers’ 1885 master-piece, especially his layout. The monum­ental orn­aments were to be returned to the Gallery of Honour, the Front Hall, the Night Watch Gallery and the stairwells. Cuypers‘ genius was best preserved in the library where the original design and ornaments have largely been maintained. 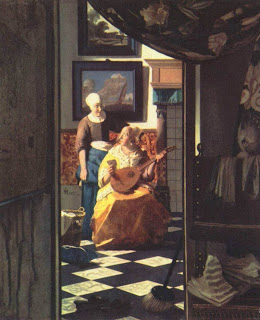 Since 2003, the Rijksmuseum has been largely closed; they have been able to invite visitors only into the Philips Wing – the 13 rooms of the museum’s south wing, a section that had already been renovated in the 1990s. Only 400 works from the Rijksmuseum’s holdings have been on show in the Philips Wing, in an exhibition called Masterpieces of the Dutch Golden Age. Fortunately the limited number of paintings included Rembrandt’s stunning The Night Watch 1642.

In the interim, many parts of the collection were out on loan, seen by audiences across the Neth­erlands and abroad.

Naturally the renovations took much longer than intended, endured problems with the contractors and cost much more than budgeted for. In the end, the project cost the good tax payers of the Netherlands over €375 million. Security was modernised, climate control was improved and computer technology was revolutionised.

But it was worth it. After a renovation that took nearly ten years, the new Rijksmuseum will be relaunched on 13th April 2013 and opened to the public the next day. The 80 rooms have been returned to their original 19th century loveliness, including their original decorat­ions and works of art. Only then will the Philips Wing close in April and reopen later as a space for large-scale temporary exhibitions.

Visitors can see up to 10,000 pieces from the collect­ion on display at any one time. This in unlike the Louvre or Kunst­histor­ische Museum, for example, where more of the treasures are in the archives than are on display. The reopening will also involve renovated gardens and a glass-clad Asian Pavilion, surrounded by a reflecting pool.

The most famous work in the collection is still Rembrandt van Rijn’s Night Watch which will be the final painting to be hung on the wall. Additionally the Rijksmuseum will show a number of Rembrandt’s other key works, including Syndics of the Drapers' Guild and The Jewish Bride. It will also display works by other artists from the Dutch Golden Age, like the incomparable Johannes Vermeer, Jan Steen, Jacob van Ruysdael and Frans Hals. 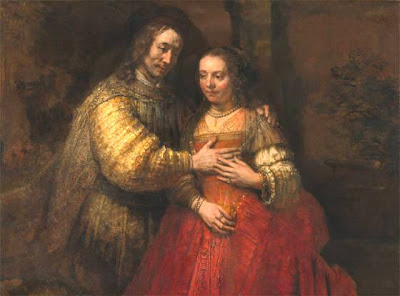 I have not visited the Rijksmuseum since 2002 and so have not seen any changes yet. But I am looking forward to seeing a wing fitted out to display its Special Collections. Large sub-collections will include porcelain, silver, jewellery, glass and ceramics, decorated weapons and model ships. Porcelain and silver are my passions.

Restoration often seems to be about removing well intended later additions and alterations. What a long project, but worth while.

That sounds like a huge project but would be wonderful to see when completed. It becomes a living history lesson when it is restored as the original.

A VERY long project. I wonder if there was ever an architectural or engineering project on earth that was completed on time and within budget. 2008, the expected date of completion, came and went.

Fortunately I love Amsterdam and can't wait to get back there.

Living history... exactly! We cannot even guess how important the Netherlands was during the 17th century. Thank goodness most of the canals, houses, warehouses, art, churches etc survive well.

Happy holidays to you too.

The main part of the Rijksmuseum will open in a fortnight and you will be able to see just how impressive the architecture is. At last.

Hello Hels, When so many museums are being "modernized" when rebuilt, it is refreshing to see one being restored to its original form and elegance. (I hope that the word-sculpture in front is just temporary, for it is distracting.)

I consider the floor-plan of a building as its main architectural attribute, so I am especially pleased that they are restoring the original layout. This will be a fitting tribute to the Rijksmuseum's incomparable treasures.
--Road to Parnassus

I have seen photos of the Rijksmueum in 1885 when the building already appeared to be large. However more and more art objects came into the collection and already by 1903 space was at a premuim.

The Netherlands Museum eventually split off, moved to another part of the building and specialised in the applied arts. Yet further changes were needed when the Asian Art Department was created etc etc.

Going back to Cuyper's original layout was a brave plan!

Good to see your post. I am glad that Rijksmuseum is going to reopen after 10 years.

I couldn't agree with you more. I haven't been to Amsterdam since 2000, so by the time I visit again next year, I will have missed all the mess and the tears.

One good thing. All the treasures that could not be seen in the Rijksmuseum during the 10 years of renovation.. they were seen abroad by visitors to other museums, in an exchange programme.

I am pleased to discover many fabulous new works in the National Gallery.

Great to hear. Any special examples?

What a great post! I'm so glad that you covered the restoration details in more depth than I have found elsewhere online.

I was in Amsterdam in the summer of 2003 (right before sections of the museum closed) and then again last year, in 2012. If I had waited just one more year, I could have seen the renovated structure! That being said, I still feel like the Rijksmuseum was huge when I went there last year, even with the closed galleries.

Although I believe that Vermeer's "Woman in Blue Reading a Letter" is traveling in an exhibition right now, it will be fun to have that recently-restored painting on display in a recently renovated structure.

I have not been for more than 10 years, since coming from this distance, every part of the trip has to be planned WELL in advance. I did not want to minimise my experience in the Rijksmuseum during the renovations, even if the 13 rooms of the Philips Wing were still fully operational.

I allocate one full day to the gallery which includes white wine and lunch outside, time to buy books and catalogues in the bookroom, and a good inspection of the gardens.

The History Blog has amazing photos of the interior of the renovated sections of the museum. Go to http://www.thehistoryblog.com/archives/24478