Port wine was invented in the C17th when British merchants added brandy to the wine of the Douro region of northern Portugal, to prevent it souring and to improve the taste. The wine was called Port, after the port city of Porto.

Since Warre’s established the first British Port House in 1670, much of Portugal’s port trade has been in the hands of the British, even now. The irony of Porto's leading industry being invented, developed and made profitable by another nation was never lost on Porto's citizens. 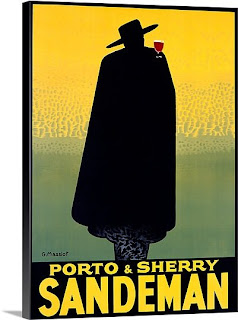 The Don, symbol of Sandeman port and sherry,
created in 1928 by George Massiot Brown

By the late C19th brand names were quite unusual and a bit scandalous, but Sandeman wanted to give customers a guarantee of quality. So, in 1880, they became the first Porto House to export bottled and labelled wines. The first agent was appointed by 1903 and within two years, the Company began press marketing and more substantial advertising campaigns. In 1914 Sandeman announced a list of their appointed agents in The Times, a list that included Paris, Berlin, Moscow, Stockholm, New York, Montreal, Sydney, Wellington, Johannesburg and Tientsin.

Sandeman’s famous trademark “The Don” was painted by another Scotsman George Massiot Brown in 1928. This artist was working for the Lochend Printing and approached Sandeman for business. Sandeman requested some designs for posters, and voila!.. the Don was born. The mysterious Don, in his black cape, wide-brimmed black hat and glass of port in hand, was based on the typical Portuguese student’s black cape and a Spanish Caballero hat. This trademark has won recognition internationally for the Sandeman brand, a dramatic figure with his glass of ruby coloured Porto. House of Sandeman, on the Douro riverbank in Gaia, Porto

George Sandeman, current Chairman of the House of Sandeman, is the 7th generation of this wine family. His great-great-grandfather married a Portuguese lady from the Morais Sarmento family, reinforcing the link with Portugal, and his father married a jerezana, from the Valdespino family, consolidating the wine link with Spain.

When in the city of Porto, tourists have three port-related tours available: a] they can travel to the 99 hectares of Quinta do Seixo vineyards in the Demarcated Douro Region, to examine grape growing and first processing; b] they can travel from the vineyards into the centre of Porto on the specialist wine boats; and/or c] they can visit The House of Sandeman in Vila Nova de Gaia, a virtual museum of wine history. And tasting. 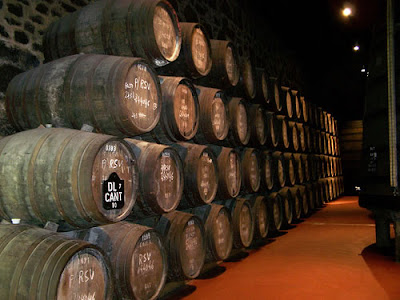 All of Porto's wine cellars are located right on the riverbank of Vila Nova de Gaia, with wonderful views of Porto. The 1797 architecture of the Sandeman building was probably designed by architect Joaquim da Costa Lima Sampaio, who also designed the city’s Royal Palace, but the Sandeman Company did not take possession of this lovely building until 1811. 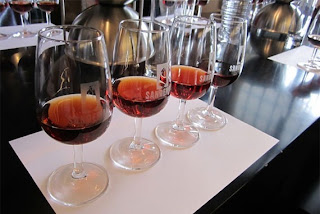 Finish the tour with wine tasting.

The blog Edwardian Promenade has beautiful photos of Porto, in the late Victorian and Edwardian years. Since the city rests by the sea, its population was always very trade oriented, as Joe and I found. Presumably its large bourgeois class, its industrial revolution and perfect location turned the city into a very important hub in the Atlantic.

I never made the connection between port and Portugal or Porto. Seems obvious now.

Andrew
I am not a port drinker so I certainly would not have made the connection either. But once a visitor sees the river, grape boats, cellars, imports and exports, tourist cruisers etc, it is clear that the city's status as a port is critical to its identity.

How interesting! I drink port very rarely, but when I do I prefer the Portugese labels.

I love the history behind the labels.

I am from Brasil, but I love Joaos work in Vacation and Travel Photos. Porto is a city full of music and wine.

the beginning of the branding may have been a bit serendipitous, but the House of Sandeman recognised a powerful development when they saw one. The distinctive brandmarks, press marketing and elaborate advertising campaigns put the company on the world map.

The blog called Vacation and Travel Photos got me thinking too. I was in Barcelona this year anyhow, and decided to spend most of the free time in Portugal. It was wonderful.

Hello Hels, This is a fascinating history of port wine. Although I don't drink, the idea of port is so interwoven with 'the good life' that I can enjoy its aura at second hand. The Sandeman company's efforts provide yet another example of attention to quality being the key to success.

I never would have guessed that The Don was intended to depict a student, but was amused to learn this right after my post showing Yale students in top hats.
--Road to Parnassus

Nice article, thanks for the information.

I am also excited by the idea that students in any university town develop a Look that is special to the students. We wouldn't have recognised the black cape today, but I bet every single citizen in early 20th century Porto knew that Look.

Thanks for your comment. Have you been to Porto? The river itself, plus both banks, = a very exciting part of town.

Hmmm, I quite like Port but then again, I love brandy so perhaps that is why. Of course, I have one drink every 3-6 months so I guess I shouldn't sound like such a drinker!

Port is still popular in South Africa to this day. I would love to visit Porto one day, especially to see that wharf.

I think the city of Porto is beginning to realise that younger people don't drink as much port as their parents and grandparents did. So they have created mixed drinks where the port is combined with soda water and various fruit juices, in long glasses.

Hello Helen:
A friend of ours who is a wine writer has visited this region of Portugal for many years and, of course, sampled the Port on many an occasion. However, in spite of his enthusiasm for both the drink and this region of Portugal we have yet to either be converted to serving Port on a regular basis or visiting what we hear to be a most beautiful area. perhaps the time has come to rectify this?

This was a most fascinating account of the establishment of Sandeman Port and its equally famous 'Don'. Strange that it should be a Scotsman at the bottom of it all when one always thinks of Whisky being their drink of choice!

I am always impressed how entrepreneurial young Scottish men from business families were, at the turn of the 19th century. In literature, architecture, medicine, engineering, interior designs etc etc.

George Sandeman probably didn't even drink port, but he saw a great business opportunity in Spain and Portugal.

And the weather was sensational.

Great post. Did you see my heritage listed house from yesterday?

Welcome to the wonderful world of my Portuguese Adventure :)

I love heritage listed properties. Give me 5 mins to look.

I have added a reference to the blog Edwardian Promenade which has beautiful photos of Old Porto.

PORTUGAL’S majestic Douro Valley has been on the international radar for centuries, ever since the British muscled in on the port trade. Behind its mountain curtain just east of Porto, the valley is almost entirely comprised of steep, rugged hillsides etched with row upon row of vines that plunge down to the languorous river. Many of the beautiful country estates dotted over the hills have now opened their doors to guests and for wine tastings.

The drive southeast from Minho to Douro passes dozens of pretty smallholdings. Orange and lemon trees grow beside vines trained on high posts in order to squeeze in vegetables or corn beneath. The route also takes in the elegant town of Braga, Portugal’s Catholic heart and capital of Baroque.

At last, I am in the spectacular Douro. Uphill from Pinhao, dizzying bends give endless perspectives of rippling hillside terracing, olive trees and the twists and turns of the legendary river.

and slightly north of Porto, as well. The Weekend Australian reference suggests that the stunning vine country continues to Braga and Douro.

Adrian Yekkes wrote that the less known treasures of Porto are the Art Deco buildings, especially in Rua de Passos Manuel in the city centre. See the beautiful photo at http://adrianyekkes.blogspot.com.au/

Many thanks for the article in the Weekend Australian. I will publish a post on Porto and the Douro Region this month (Feb 2028)