Napoleon gave it to Josephine! (The art object, I mean)

Princely taste, indeed. The Empress Clock, a spectacular ormolu mounted automaton singing bird vase clock, was made for the Empress Josephine in 1805.

The case of this clock is attributed to Claude Galle, (1759-1815), a bronzier and gilder working in Paris. No other bronzier in Paris obtained as many royal commissions as Galle. After the French Revolution, Galle continued to produce numerous pieces for Napoleon Bonaparte, including an order for the Chateau of Saint-Cloud. In the early C19th, Galle participated in the refurnishing of ALL the royal palaces, including Napoleon's residences in Italy.

By this time, the Galle firm had become one of the largest in Paris, with 400 workers. Their craftsmen made this sort of case for clocks of course, but also for ewers and vases. 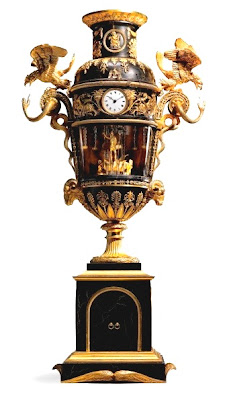 The clock & automaton maker was Jean Francois DeBelle. DeBelle was a pupil of the great horologist Robert Robin and became a master in 1781. He seems to have been an unorthodox artisan, working outside the guilds, but popular for his fine work. He was court clock-maker to Louis XVI and Marie-Antoinette until their 1793 execution. DeBelle apparently went into hiding during the revolution, but his life improved with the establishment of the First Republic.

Sotheby’s believes that DeBelle’s talents were bought to the notice of the Emperor Napoleon when he supplied two vase clocks to his brother, Joseph Bonaparte, King of Naples and Spain. Similar to Josephine’s clock except for the singing bird, the other two vase clocks are now in Madrid National Museum.

In any case, Napoleon and Josephine were married in 1796 and were crowned Emperor and Empress of France in 1804. In 1805 Napoleon asked DeBelle to make an automaton clock as a gift to the Empress and one year later the clock was delivered. She must have loved it since the clock remained with her at Malmaison, following her divorce from the Emperor. After her death in 1814, her property went to the children of her first marriage, Eugene and Hortense. And DeBelle supplied the Emperor Napoleon with many art objects for the Grand Trianon, where Napoleon later lived there with his next wife Marie Louise of Austria.

The Empress Clock was tall (82cm) and made of a rich range of materials - the Sotheby’s catalogue mentions ormolu on the bronze, painted brass, steel, glass and stained peacock feathers. The tapered body was painted to resemble veined marble, the upper section and neck applied with finely chased mounts representing Arts and Science. The enamel dial within a frieze of rams and cornucopias was flanked by crisply cast eagles attacking serpents, which formed part of the scroll handles.

When the clock struck, an automaton bird appeared, flapped its wings and opened its beak - its breast feathers trembling - as it selected one of three tunes played by pipe organ. DeBelle ingeniously concealed the movement that operates both upper and lower automata sections of the clock.


Now a lovely comparison, smaller but from the same era.

Richard Redding Antiques in Zurich had a very fine Empire gilt and brown patinated mantle clock of eight day duration, signed on the white enamel dial Lefevre suc De Belle à Paris. The dial had Roman numerals and outer Arabic numerals for the days of the month and a fine pair of gilt brass hands for the hours and minutes. The blued steel pointer was used for the calendar.


The movement had anchor escapement and silk thread suspension, striking on the hour and half-hour with an outside count wheel. The architectural case had a stepped rectangular top with overlapping stiff leaf cornice and the dial was surmounted by an egg-and-dart moulded arch terminating in Apollo masks and stylised branch and dragon spandrels. The glazed panel was used for viewing the pendulum bob flanked by husk-festooned torchères, the sides with arched glazed panels surmounted by triangular pediment mounts and flanked below by amphora. The whole object was placed on a stepped base, centred by an applied mount with vase, dragons and flanking rosettes, on bun feet.

I like the second clock much more. It's very elegant and delicate. I am afraid that the first one reminds me a bit of a funeral urn - perhaps I don't have any taste like poor Josephine!

The Napoleon Exhibition at the NGV is very strong on art and design, especially the Consular style. This post-coronation era loved more lavish classical ornament i.e cultures of Greece, Rome and Egyptian.

Hi Helen, This is absolutely beautiful! I did not know about this and I'm happy you posted this. What part of the clock had stained peacock feathers?

I wonder if Napoleon included Josephine in the decision-making about any objects that went into their marital home. I know the only area in which she had full control were the gardens, especially the botanical collections from overseas.

*nod* Not only is the exhibition itself very impressive, but the style descriptions on-line are most useful:
http://www.ngv.vic.gov.au/napoleon/art-and-design

I am still having a bit of trouble fitting in the Empress Clock 1805, style-wise. The decorative elements must have been considered as over the top, even back then.

I can barely tell which symbols are peacock feathers either. I hope they are on the bottom register of the tapered body.

Have a look at Napoleon’s Clock by Louis Moinet, dated at almost the same time (1806). Now in the Utrecht Museum, visitors can see the peacock feathers a bit more clearly.

How strange. I was thinking that it must be incredible to have The Empress Clock in one's possession but its value seems somewhat diminished now that I know that such a hefty price tag has been given to it. Does that make sense?

There is something magical about it though and it is not just its impressive size. It seems to have the air of being made for such an important person. I certainly prefer it to the second clock (says she, of the more taste than money kind).

I was thinking of omitting the monetary value from the post for that very reason. But the object is so important historically, aesthetically and mechanically that a pound value seemed relevant.

This automaton clock must have impressed even the most blaze' royal mind. The bird appeared, flapped its wings and opened its beak, then music played!

What are the sources of your information about the clock and its makers?

good on you for asking. I assumed everyone knows how to find the sources in blog posts, and clearly that was a silly assumption.

The references are highlighted in blue. Press on the word (eg Sotheby's) and it will take you directly to the site that I cited.