St Ives School - who says artists must suffer for their art?

St Ives was always a pretty fishing area of Britain, and the Porthmeor studios were opened for business as early as 1815 (probably originally built for something fish-related). This suggests that by the later C19th, keen artists were building their studios on top of the fishermen's cellars. Nonetheless the town wasn’t a realistic destination for most travellers until the extension of the Great Western Railway in 1877. 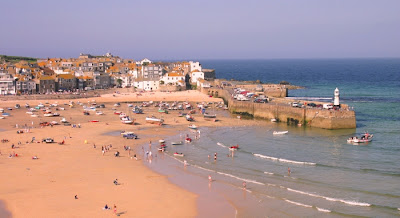 St Ives and its beach

As a result, much of the town was built during the later C19th when the permanent population increased marginally and the number of visitors increased substantially. Note the British-American artist James Whistler and his pupil, English impressionist painter Walter Sickert. Note also Australian ex-pat artist Emanuel Phillips Fox who settled at St Ives in 1890 and met the artist Ethel Carrick there in 1901. They soon married each other. 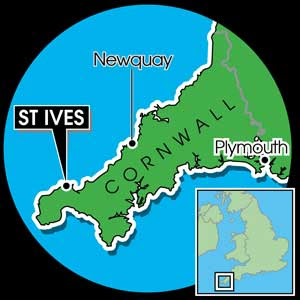 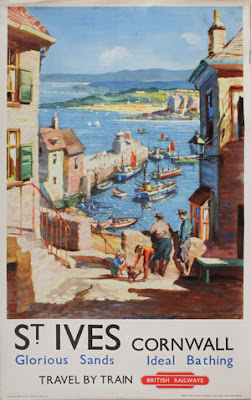 Even then, it took some time before art critics recognised the area as a centre for creativity. The first event that established the town on the national scene was when an art pottery studio was established in St Ives in 1920 by Bernard Leach. Then in 1928, painters Ben Nicholson (1894–1982) and Christopher Wood (1901–30) visited St Ives and loved what they saw. So I am suggesting that the 1920s was the first important decade in the development of the Cornish fishing port as an artists' colony.

Christopher Wood met and became quite close to Ben Nicholson in 1926 and soon moved to Cornwall to paint and to exhibit together. Wood said he painted coastal scenes because he loved the sea, he loved primitive landscapes and because his family had always messed around in boats. What a tragedy that he died, at his own hand, aged 29.

Ben Nicholson married the sculptress Barbara Hepworth (1903–75) in 1938 and with the outbreak of World War 2 in 1939, they decided to settle in St Ives for the long term. They were soon joined by the Russian sculptor Naum Gabo (1890–1977). Gabo had moved from Russia to Munich and Paris (amongst other cities) for many years and didn’t settle in Britain until 1936. Locals looked on in amazement as the artists made sleepy old West Cornwall trendy.

Trewyn Studio, purchased by Nicholson and Hepworth in 1949, was no bigger than many other stone-built houses in the town. The war had ended and a new, younger generation of artists emerged, led by the star couple. This second generation of artists also made the Cornish coast their home and continued using the term The St Ives School. The 1950s were tough years for most Brits but St Ives’ modern artists were doing well. 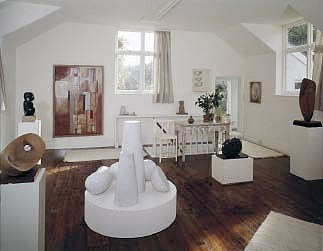 After their divorce, Barbara Hepworth continued to live in the St Ives house and died there in 1975, aged 72. Trewyn Studio, now The Barbara Hepworth Museum and Sculpture Garden, was opened the very next year (1976) by her family, following the plan she outlined in her will. The Museum has been run by the Tate, almost since it opened to the public. It displays a representative group of her sculptures, permanently available to the public, both inside the house and outside in the garden she loved.

So St Ives is a stunning beautiful place for an art museum; plus it is totally appropriate for a Hepworth museum ...since she lived and worked in the town. 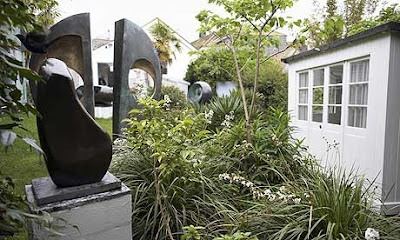 The Tate St Ives is a totally separate art gallery and is worth a visit for its architecture and spectacular location on Porthmeor Beach alone. Exhibitions vary throughout the year and may be accompanied by lecture series. The population of St Ives is probably under 12,000 people, so I am assuming that the lectures and exhibitions are held partially to attract outsiders. 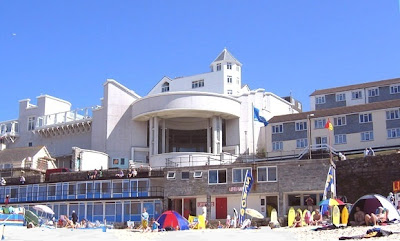 Bernard Leach continued potting in St Ives until 1972 with his students and apprentices, and died in 1979. The pottery remained open under the direction of Bernard's wife and then after her death in 1999, it was bought by a local businessman. The Pottery Cottage, next to the Leach pottery, is now open as a museum, focusing on the output of talented potters throughout the 1920-2000 era. 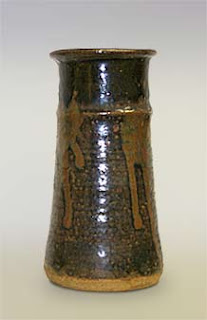 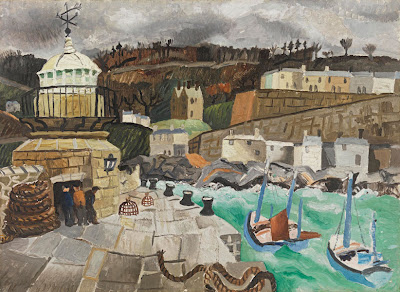 They even have surfers there now Hels. It looks very inviting.

Hello Hels:
There is so much in this post which resonates with us and St. Ives remains one of our favourite places in Cornwall, particularly out of season. Alas, during the summer months the whole town has now become a tourist trap.

A friend of ours of many years standing worked with Bernard Leach or rather, more truthfully, he trained her. She is fortunate to have a number of his pieces, whilst another friend knew Ben Nicholson and has several of his works on her walls. Sigh!!

Both Tate St. Ives, and the Hepworth Museum, are, in our view, superb, the former not only for its contents but also, as you have said, for its very striking architecture.

This post has certainly inspired us to revisit old haunts. Do you know of the wonderful Hepworth Madonna and Child which is in the parish church and often overlooked by visitors to the town?

British landscape can be absolutely gorgeous - green for as far as the eye can see, mountainous, historical treasures dotting the cities and rural areas.
But oh the weather :(

The Cornish coast is just lovely. Exactly where all thinking people would want to live, especially artists and writers.

I have never been so jealous in my life. You are connected, in one way or another, to half the locations and stars of the St Ives School. If only I had ever met Ben Nicholson, Barbara Hepworth etc - 5 minutes in a crowded train station would have been enough.

I looked up the Hepworth Madonna and Child in the St Ives Parish Church and no, it was new to me. But I know why. The only time I was ever in St Ives was on an organised bus tour. Great tour but impossible to cover everything.

What a lovely place - It must have been distracting when "suffering" the view of the beach.

Chris
I realise some people in the arts were perfectly normal, but there seemed to have been a belief that creativity only came through struggle and pain. So most people in the arts were
1. grindingly impoverished
2. sleeping in a freezing attic
3. grossly socially inept
4. had TB, alcoholism or VD
5. were hated by landlords and neighbours
6. had sex only if they paid for it
7. died young and tragically.

The St Ives people were warm and comfortable, surrounded by a beautiful landscape and welcomed by the locals.

I like the Newlyn School of Art but there was probably no connection with the St Ives School. Different time and different people?

you might expect that two small fishing villages on the Cornish coast might have been associated art-wise. But it seems not.

Newlyn got going in the late Victorian decades and shone till WW1 broke out. Impressionists like Laura and Harold Knight, Alfred Munnings and Stanhope Forbes were my favourites.

Compare this to the modernising goals of the St Ives School whose heyday was the 1920s-50.

Thanks for the article Helen. It isn't often that my home county gets a mention. Cornwall still has a disproportionally high level of art and craft professionals which gives it a different socal quality and network than some other areas of England.

I lived for 2 years in the UK originally (back in the early 1970s) and have been back every second northern summer since. So I know London, all the Home Counties, Oxfordshire, Suffolk, Norfolk, Sussex, Hamps, Beds etc very well.

But other parts of the country I have only visited via Summer Academy tours or one-off family trips. What a shame. The more I learned about the St Ives (and the Newlyn) art schools, the more I dream of living out your way.

Timing is everything. Have a look at an exhibition of Wilhelmina Barns-Graham's art, at the Fleming Collection in London.

Cornwall is so beautiful and St Ives exemplifies the picturesqueness of Cornish towns. No wonder the artists were attracted to it and one can see much of what inspired them in their works.

do you know Cornwall well? I wish I did.

The Fleming Collection in London has an exhibition of Wilhelmina Barns Graham: a Scottish artist in St Ives. Alas it ends this coming week. But it might be worth seeking out the catalogue.

The Tired of London blog has wonderful photos of the Barbara Hepworth Museum and Sculpture Garden.

I did not know that the accidental fire that caused the artist's death in 1975 destroyed much of the studio furniture and all her books, but no works of art were damaged. The god of art works in mysterious ways.