Meissen: the town and its porcelain

Being a passionate collector and admirer of early European porcelain, I had been very interested to read how Augustus the Strong, Elector of Saxony and Chinese porcelain fanatic, was desperate to crack the secret that the Chinese had held for so long. Augustus had been spending too big a portion of his annual royal budget on importing porcelain, and he believed it should have been possible to create porcelain at home. Equally exquisite, but far cheaper!

Each Elector of Saxony lived in Albrechtsberg castle, built in the C15th as a late Gothic royal residence. In 1705 Augustus the Very Strong set up a secret laboratory within his castle walls. He imprisoned the alchemist Johann Friedrich Boettger (1682-1719) and others in his castle and probably would have kept them there for life, in order to find the magical formula.

Fortunately for Boettger, he discovered the formula. The first successful experiment took place in 1708 and within two years, the good citizens of Saxony were delighted to see European-created porcelain. Augustus the Strong immediately turned part of his castle into a porcelain factory, with workshops for hundreds of designers and craftsmen. Security against prying (royal) eyes from Vienna and other cities was paramount. 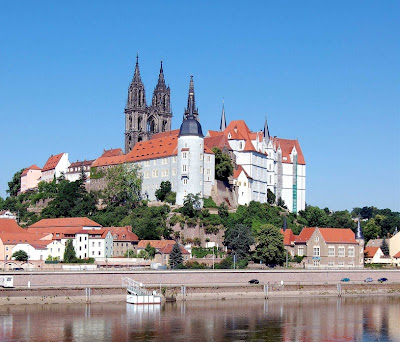 Albrechtsburg Castle and the Meissen Cathedral above the River Elbe

By the end of the C19th, the factory moved out of the Albrechtsburg which was by then looking a bit tatty. So the residential palace was renovated and the space that had been utilised as a porcelain factory was opened as a historical museum to the glories of the Saxon past. City pride expanded and soon after, Meissen’s cathedral was crowned with the skeletal spires in the late Gothic style that now lend such drama to this city. By the 1880s, Meissen was offering a splendid package-deal for tourists. 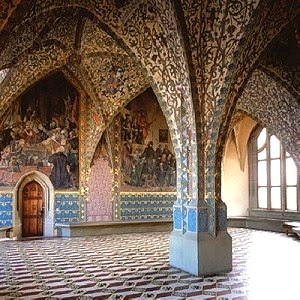 Apparently the exhibition put on at the Albrechtsburg for the 300th anniversary of Meissen porcelain in 2010 was particularly impressive. The exhibition hall presented a fine analysis on three centuries of porcelain manufactured by hand, including the porcelain made for Catherine the Great of Russia and the famous 3.5 m high centrepiece created for the dining table of King Augustus III.

When Joe and I were in Dresden, we found a brilliant 4-hour tour of the medieval city on the banks of the River Elbe. Situated only 25km northeast of Dresden, it is clear that the historic town of Meissen still owes its international reputation to its famous porcelain factory Staatliche Porzellan-Manufaktur Meissen GmbH. Its 1720 logo of two crossed swords, on the bottom of each porcelain object, is one of the oldest trademarks in existence and is still a guarantee of quality across the world. 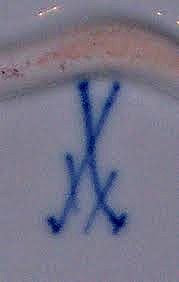 The crossed swords logo was introduced in 1720 to protect the company’s exclusivity.

We were taken on a walk through the winding and quite steep medieval streets, and very much enjoyed Albrechtsburg castle and adjacent cathedral. It is not a coincidence that Meissen's historical district is located close to the market at the foot of the castle hill.

But the highlight of the excursion for me was going through the showrooms of the Meissen factory. The tour began with a short film on the history of the factory, the raw materials used and the processes adopted. In the following four rooms, the visitors saw how Meissen porcelain was made by hand. Relief-moulded cups were thrown, and parts of figures cast, at the workbenches of a thrower and modeller. The fettler then joined the parts of a figure together. Underglaze painting was demonstrated and the tour concluded with a display of overglaze painting. Floral decorations and painting based on oriental motifs were used to illustrate this multifaceted technique with its extensive nuances of colour.

On leaving Meissen, the tour offered a chance to stop for photos at the magnificent Moritzburg Castle. Nestled among woods and lakes, the former hunting grounds of Augustus the Strong were seen en route back to Dresden. But I don’t remember Moritzburg. 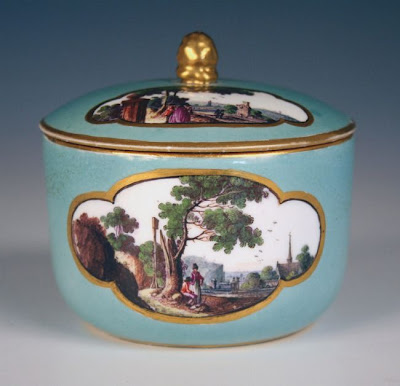 I am afraid those added spires just look so wrong, but it was interesting to learn that Meissen was the first European porcelain.

We will be in Dresden in July. How long did you stay there and was the four hour tour of Meissen enough?

yes it was the first, but not for long. Those sneaky royals in Vienna, equally as desperate as Augustus the Strong to save themselves a fortune, paid for spies to infiltrate the Meissen setup. There must have been a rat in Meissen who jumped ship, because within a few years, Vienna was producing its own hard-paste porcelain.

By 1760 lots of porcelain factories had opened for business in Europe. However hard-paste porcelain remained a distant dream for some of them.

although most growth in the last 200 years was beyond the old city walls, Joe and I were mostly interested in Old Town. Dresden Frauenkirche is looking fantastic again, as is Dresden Castle and its Procession of Princes, Zwinger Palace, Old Masters Art Gallery, Semper Opera etc etc. Three days = perfection.

The four-hour tour of Meissen seemed enough to see the highlights, but if you want more than a lick and a taste, you might like to spend a full day there.

Your tour sounds wonderful. Did you buy any Meissen porcelain while you were there? I have only own a few pieces in my life time. It’s a good thing the formula was discovered for making porcelain in Europe was discovered. There was so much talent all over Europe in the 18th and 19th century for use to look at and collect today. I recently found out that porcelain clay has small crystals in it. This is what makes porcelain ring like a bell.

Hello Helen:
What an interesting story this is. Dresden we believe to be an absolutely beautiful city but, although we have had good intentions, we have not yet managed to get there. Your post has certainly sparked our interest once more.

The development of the Meissen porcelain is absolutely intriguing and the pieces which have been produced over the years are simply remarkable. Like you, we are sure that we should have enjoyed greatly a tour of the Meissen factory.

A few years ago we visited the Herend factory in Hungary, home of one of the finest Hungarian porcelain manufacturers. That we found to be wonderful, especially with its connections with Queen Victoria.

If you have time, it is well worth visiting Schloss Moritzburg. Not only are the architecture and gardens a triumph of 16th century planning, but there is an Augustus connection. Inside the castle is filled with over-the-top baroque decor from Augustus the Strong's personal taste.

The first collecting bug that bit was silver, from the 1680-1730 era. I bid for it at auctions, but eventually got priced out of the market. Then I moved to early 19th century porcelain. It was a consolation prize, but a very beautiful one :)

you absolutely MUST get to Dresden. Although the damage in WW2 and the death toll of civilians was horrific, renewal over the last 22 years has been impressive. It must have been a gorgeous city, once upon a time.

Funny you should mention the Herend factory in Hungary. My in laws were Czech so I thought they would have known and collected only Czech porcelain. No... they loved Herend as well :)

Look what I found since your note:
The re-opening of the Porcelain
Quarter (in the Castle) marks the completed restoration of the
original exhibition rooms. It displays Meissen porcelain
depicting hunting, exotic and mythological motifs as well as animal figurines, i.e pieces relating to Moritzburg’s original determination as a hunting lodge and pleasure palace.