The House of Fabergé was founded in 1842 by Gustav Fabergé in a basement shop in St Petersburg. The information about the first Fabergé generation is scatty, but there is far more to say about the second generation. Gustav's son, Peter Carl Fabergé took over and expanded the family firm until it was an empire employing 700 workers. No one made art objects as stunningly beautiful and rich as the House of Fabergé in the later 19th century.

When Carl Fabergé took over the running of the business in 1882, its output increased so rapidly that he (and his brother Agathon) could not fulfil all the commissions themselves. They therefore decided to establish independent workshops. A Fabergé workmaster was a craftsman who owned his own workshop and created art objects for Fabergé. There were two elements of quality control. Firstly the workmasters were committed to work exclusively for the House of Fabergé. Secondly Fabergé would accept not art objects until those objects had been approved by Carl or by his personal representative. 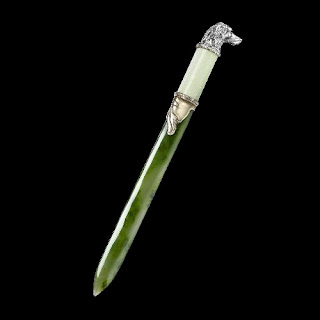 Let me mention just three of these workmasters. Gabriel Niukkanen was a Finnish craftsman who had his own independent workshop in St Petersburg during the 1870s and didn’t become a workmaster for Fabergé until 1885. He specialised in small silver and gold art objects.

Erik August Kollin (1836-1901) was born in Finland, where he qualified before travelling across the border into Russia in 1868. By 1870 he had opened his own workshop in St Petersburg. Kollin joined the Peter Carl Fabergé empire and by 1872 was put in charge of all Fabergé workshops, so he must have been hugely talented. He was Fabergé's first chief jeweller, mostly using gold and silver. The initials EK will be found on each artefact, alongside the Fabergé hallmark. Kollin’s most famous work include art objects made for the German Princess Mary Adelaide, Duchess of Teck, which were passed on to her daughter Queen Mary and her British son-in-law, King George V.

Anders Nevalainen was a third goldworker born and apprenticed in Finland in 1858. Nevalainen had moved to St Petersburg by 1874 and was a master goldsmith in 1885. A master first working in the jewellery workshop of August Holmström, Nevalainen soon became as head of workshop under exclusive contract with Fabergé. Look for his initials A.N, used with the Fabergé mark. 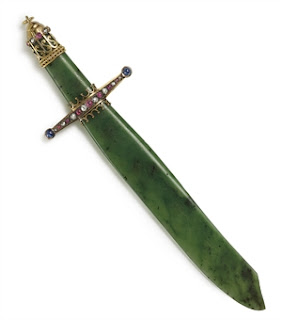 Fellows Auction House had two special Fabergé paper knives. Examine a parcel-gilt, enamel and nephrite paper knife, 21.5cm long. The handle terminal was modelled as a spaniel's head with red gem eyes, above a short cylindrical column in lime green guilloché enamel. It led to a foliate mounted nephrite jade blade, post 1896 mark for Erik August Kollin of St Petersburg. The estimate for this lot was £5,000-£8,000.

Nephrite jade is a calcium-magnesium silicate that can be translucent or opaque, and can appear as green, grey or off white, depending on the minerals in the material. Diamond is the hardest mineral i.e the most resistent to scratching, but nephrite is the toughest i.e the least brittle.

Another Fabergé paper knife from Fellows was 23cm long. The slightly later date and large size did not detract from the parcel-gilt, enamel and nephrite material which had the handle terminal modelled as a swan's head with red gem eyes. It ended a cylindrical column in royal blue guilloché enamel, mounted with cabochon garnets and classical motif giltwork. And it led to a scrolling foliate mounted nephrite jade blade. The workmaster's mark was for Henrik Wigström and the estimate for this lot was £8,000-£12,000 (USA$12,600-19,000). 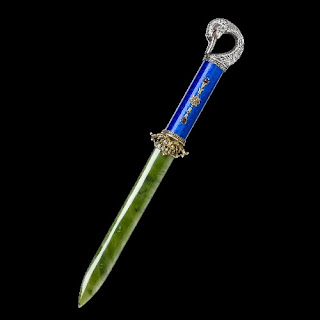 The most beautiful paper knife, dated after 1886, was made from nephrite, gold, rose diamonds and cabochon sapphires. This paper knife was produced in the workshop of the workmaster Gabriel Niukkanen, St Petersburg and was 15 cm long. But note the more complex shape. The translucent nephrite blade was created in the form of a sword; the openwork gold pommel was set with rose-cut diamonds and cabochon rubies, with a gold suspension loop. Auctioned by Christie’s in New York, the estimate was USA$10,000-15,000.

A different nephrite jade paper knife had silver decoration, with a garnet and diamond in the snake head. The Fabergé mark showed a date after 1896 and before 1910, but there was no maker’s mark. Fabergé made a lot of decorative art objects as accessories for desks and the estimate here was USA $10,000-20,000. 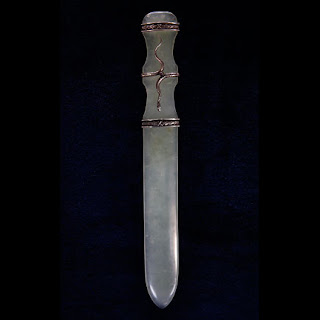 Christie’s had a gold-mounted nephrite paper knife by Fabergé, with the workmaster's mark of Michael Perchin, St Petersburg 1896-1903. The elongated flattened nephrite blade with a striated cage work handle with leaf-chased border. Altogether it was 14.9 cm long. As Kollin was replaced by Michael Perchin in 1886, Kollin’s hallmark should be limited to the era 1872-86. Perchin’s hallmark would be limited to any time after 1886. 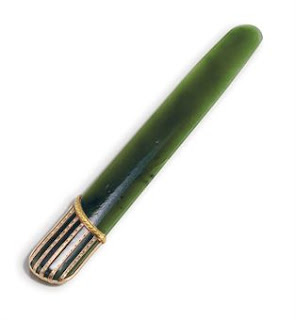 Examine the longest (17 cm long) and most modern (1908-1917) of the paper knives that I could find. Along side the Fabergé mark was the workmaster's mark of Anders Nevalainen St Petersburg. The flattened nephrite blade really did resemble a knife. The tapering gold handle was enamelled in translucent white over a guilloché ground, within gold stylised foliate borders. It terminated with a reeded finial. 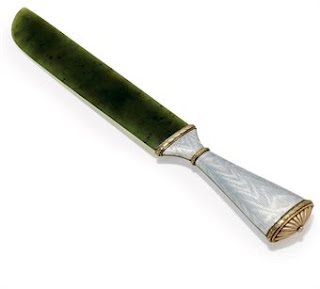 I like architecture and all the arts too, Bank :) Mind you, art objects made from nephrite jade and silver are new to me, too.

In the eighties, I had a fascination with jade. It passed. Fabergé is just such a wonderful word and I didn't know it was actually someone's name.

I wish I knew you back then. "Art" was what painters, sculptors and architects did - not people who loved nephrite jade.

I came across the Faberge family because I was studying the Huguenot/Protestant artists and artisans who were expelled from France in 1685. They and their descendents ended up all over the tolerant world, including it would seem Russia.

Gustav Faberge didn't move to St Petersburg until the 1830s, but he must have been a beautiful gold artist and jeweller. His son even more so. Forget the royal easter eggs; go for something normal humans can afford.

They are exquisite pieces!
My dream would be to possess a Faberge egg.
Sadlyit is impossible to find this expertise and skills in most of today's creations.

Paper knives, beautifuuly designed and created? I wonder if people ever used them for their real purpose or if they were always meant for display.

possessing a Faberge egg is improbable :) Even if you could afford it, only 46 Faberge eggs are believed to have survived. Of these, only 19 are in Russia and are national treasures. Virginia's Museum of Fine Arts in Richmond has another 5.

Nephrite jade might be the toughest material i.e the least brittle, but I suspect owners of these paper knives were passionate about the look, not the functionality. Imagine how beautiful a desk would look!

They could probably be quite deadly too! Did Miss Scarlet do it in the library with a Faberge letter knife?

now that all communication is done on line or via texting, there is an entire generation of young people who won't even know who Miss Scarlet was.

But then I don't suppose we need paper knives any more, or suspenders for our stockings, or hair nets. Everything changes, nothing stays the same :(

very good designers indeed! Today I found a stunning Cartier paper knife made with a sterling silver patterned handle and green nephrite jade blade. It looks very much like the Perchin example (1896-1903) except for the cage work pattern.

I am researching the history and design of paper knives. I have read with much pleasure your commentary on Faberge paper knives.

I am well on the way to preparing a text for a book on paper knives and I was wondering if you would consider allowing me to include your commentary exactly as it is – with full acknowledgements of course. I do hope that you will not mind me asking.

I do look forward very much to hearing from you.

I would be delighted. Just two requests:
1] ensure that the references in my post to other sources are published. They are embedded in the post and you will find them by pressing on the underlined words.
2] I would love a copy of your final journal article.