John James Audubon (1785–1851) fans will remember the Sale of Magnificent Books, Manuscripts and Drawings from the Collection of Frederick, 2nd Lord Hesketh a few months ago. Let me add some details about the huge Birds of America books, revealed by Country Life Magazine.

The four volume double-elephant-folio measured 40" by 27". Double elephant was, until 1772, the largest size of drawing paper made in England. To make it easier to attract and keep subscribers, the hand-coloured mixed-technique prints were issued in monthly batches of five between 1827 and 1838. And in order to avoid having to donate copies to public libraries, the text was issued separately between 1831 and 1839. Thus the choice of binding was left to the subscribers. This one, #11, was not only bound but given its own beautifully designed mahogany cabinet as shown.

mahogany cabinet especially made for the Audubon folios

The first few prints were produced by Lizars of Edinburgh and the rest by the Robert Havells in London, and all are superb. The colouring is glorious throughout, especially the deep, rich sheen of the black plumage. This copy remained in the subscriber's family until 1951, when it was acquired for £7,000 on behalf of the 2nd Lord Hesketh.

Only 19 years after JJ Audubon was born, John Gould (1804–1881) was born in Dorset. Gould became a taxidermist who was commissioned to preserve the large number of exotic animals being brought to Britain by natural historians from their international travels. An important point in young John Gould’s career was when he became curator at the Zoological Society in London.

When Charles Darwin returned from the Galapagos in 1837, he sent his birds to Gould for preservation and identification. Darwin then presented his specimens to the Geological Society of London. Darwin and Gould continued to meet and Gould’s identifications were so significant that they played a role in Darwin's theory of evolution by natural selection. As I noted in an earlier post, Darwin's own book from the trip, published as his Journal and Remarks 1839, described his scientific observations.

Gould's work on the birds was published between 1838 and 1842 as Part 3 of Zoology of the Voyage of HMS Beagle, edited by Charles Darwin. The birds were retained in the natural history department of The British Museum, now the Natural History Museum. 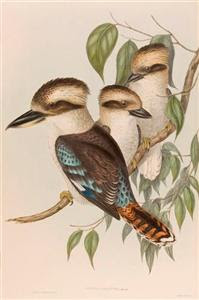 Great Brown Kingfishers in The Birds of Australia

In 1838 John Gould and his wife Elizabeth sailed to Australia with the express purpose of studying birds from the antipodes. The couple, together with the collector John Gilbert, sailed to Tasmania to meet the vice-regal family, Governor Sir John Franklin and his wife. In February 1839 Gould sailed to Sydney, leaving his pregnant wife with the Franklins. In April Gould returned to Tasmania for the birth of his son.

In May he sailed to Adelaide to meet the famous explorer Charles Sturt, who was about to lead an expedition to the Murray River. Gould collected specimens across South Australia, returning again to Hobart in July. In just two years Gould had travelled widely across the south eastern states, collecting specimens of Australian birds and other fauna. They returned home to England in May 1840.

After the trip, Gould took a few years to complete his masterpiece called The Birds of Australia, written between 1840-48. It included a total of 600 plates in seven volumes, including 328 species that had not appeared in the literature before. Elizabeth, who had illustrated several of his earlier works, made hundreds of drawings of the 681 specimens for publication in The Birds of Australia. 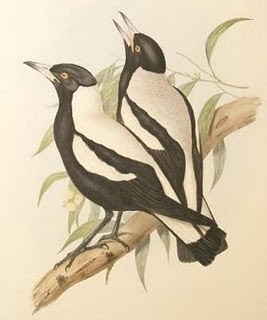 Magpies in The Birds of Australia

The plates of the book were produced by lithography, Elizabeth producing 84 plates before she died in 1841. After her death, 595 plates were produced by HC Richter from Elizabeth's drawings. In total, both in text and with the plates, the book became the first comprehensive survey of the birds of Australia. Only 250 sets of the seven-volume work were printed.

Next Gould created a three volume work called The Mammals of Australia (1849–1861). Then he gathered 320 species of humming birds, which he exhibited at the Great Exhibition in Crystal Palace in 1851.

In May 1857 he travelled to North America with his son. He published A Monograph of Humming Birds with 360 plates (1849–61). Then Gould published a revised and updated version of the text of The Birds of Australia in the two-volume Handbook to the Birds of Australia (1865). He must have been very busy, despite or perhaps because of the tragic loss of his wife. 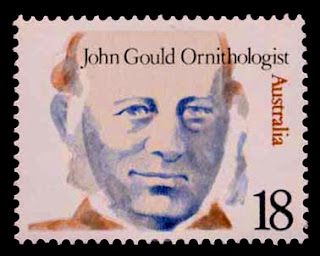 The Gould League, founded in Australia in 1909, was named after him. I remember this organisation very fondly since back in the 1950s every grade 6 student across this wide brown nation studied bird life and environmental science. When students passed an examination at the end of the course, they received a certificate of membership in the Gould League. In 1976 the British ornithologist was honoured on an Australian postage stamp bearing his portrait.


I recommend The Business of Nature: John Gould and Australia, written by Roslyn Russell and published by the National Library of Australia in 2011. The publishers said that with all the acumen of a shrewd Victorian entrepreneur, Gould established a thriving business that took him into the world of the British aristocracy and the scientific elite. He also warned of a problem that might result from colonists introducing exotic animals into Australia i.e that the native species could be decimated. Clever man! 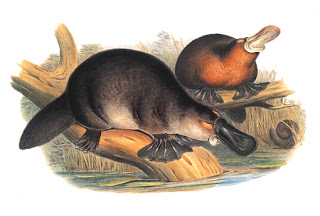 Duckbilled Platypus, in The mammals of Australia

Hels throws her arms around Andrew in empathy and nostalgia :)

Not only did I receive my Gould League certificate... students who received over 86% on the exam were invited to a presentation evening and received a beautifully printed book. The book was way too babyish for a smart 11 year old, but I loved the event.

Hello Helen:
Another remarkable and informative post. Each time you publish, we learn not only something new, but something of interest too. And, as an aside, how fascinating to read of the Gould League.

On the subject of taxidermy, we have over the years built up a collection of birds mainly [although we do have a fox] in cases and under glass shades all dating from the C19. In particular we have a large case of highly colourful birds which, we are informed, are Australian species.

Then there was the butterfly tagging project.

Jane and Lance
I am very impressed that you take a serious interest in natural history. While it was popular with many educated amateurs in the mid-late 19th century, it seems very rare today.

By the way, thanks for reminding me. I have added a link to Darwin's own story.

Hi Hels - funny you should write a post mentioning Charles Darwin and the voyage of HMS Beagle. Last weekend we found ourselves at Down House, Darwin's residence for nearly 40 years.

I will (eventually) be writing a post about Darwin and Down House on my blog when time permits.

From what I could see apart from his scientific achievements he appeared to be a very pleasant man in private as well.

His butler was a personal friend and remained in his service for over 35 years.

Glen
you are so fortunate to be able to share important 19th century connections with your son. I would give my eye teeth to have taken my boys to Down House.

We are not totally bereft here in Australia, although most of our early European history is in Sydney and Hobart, not in Melbourne. However my boys did visit a] Captain Cook's Cottage in Melbourne and b] the 19th century Louis Pasteur house and laboratory on Rodd Island in Sydney Harbour.

Traces of Darwin and Gould in Australia still exist, but they are more difficult to track.

Andrew
I remember the 1950s very well, but can no longer remember the names of our new nextdoor neighbours or the actor who stars in Morse *sigh*

I don't recall being part of any butterfly tagging project, but in Grade 6 I certainly remember the Temperance League giving us lectures on the evils of alcohol. All the students dutifully signed The Pledge, an oath I have consistently broken ever since :)

They are amazing.I am not an artist.But I love Arts. The arts are so beautiful to be praised.

Magento
I am not an artist either... far from it. But we can love and appreciate other peoples' brilliant talent.

Ditto great music. I can't play a single note, but great music is to be very much admired and enjoyed.

We have a rare and exquisite collection that has not been offered privately for many years. Exceptional and pristine, it consists of 12 folio works in 44 volumes, containing over 3,000 fine hand coloured lithographs executed by Gould and his assistants. John Gould was one of the most distinguished ornithologists of the nineteenth century.

That is perfect, thanks. I hope readers can get to see your treasure.

I hope that the normal number of visitors turn up, after the last Covid lockdown. People will be pleasantly surprised to see Edinburgh's role in Audubon's very special book.