King Edward VIII abdicated, but at least he lived well

The Landmark Trust is a British building preservation charity, founded in 1965. It was created to rescue historic and architecturally interesting sites from neglect and, when restored, to let them out as holiday places. The Trust thus promotes enjoyment of historic buildings by enabling as many people as possible to experience living in them for a time. The letting income generated from holiday bookings then pays for the future maintenance of the buildings.

In September 2010, Landmark France was established as a separate, not-for-profit organisation set up by the Landmark Trust in Britain to assist in the preservation of historic buildings in France. In a very clever endeavour, a cross-cultural partnership agreement was signed between Landmark Trust and the French government coastal conservation agency, le Conservatoire du littoral. Together they will pursue the restoration of historic buildings owned by the Conservatoire round the French coast. 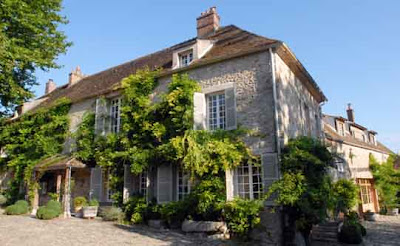 The opening of the first three French Landmarks at Le Moulin de la Tuilerie marked an important site. King Edward VIII abdicated from the British throne in 1936 to marry a multi-divorced American woman, Wallis Simpson. Pro-Nazi before and during the war, the couple was banished to the Bahamas where he was safely ensconced in Government House. Fantastic photos from this era can be found in Habitually Chic blog.

The couple was still in exile after the war. Banned from Britain and with no meaningful jobs, the Windsors had to settle for a very active social life on the international scene. The official home of the Duke and Duchess of Windsor from 1950 was a C19th villa in the Bois de Boulogne, on the western outskirts of Paris. Belonging to the Paris town hall, the house was given to the Windsors at a nominal rent to encourage them to move to France. But they never liked it much because it was too public. So Le Moulin de la Tuilerie became their "country weekend residence", although it is only 35km south of Paris (on the edge of the town of Gif-sur-Yvette). They used their rural estate from 1952 till 1972.

Edward loved the 18th century mill site and commissioned English garden designer, Russell Page, to design the gardens. Apparently the Duke tended the gardens himself. The three buildings are set around a courtyard behind huge oak gates, and the grounds open onto views of the valley beyond. It was the Windsors who expanded the guest accommodation into the mill’s outbuildings, so it was important that these cottages should retain a sense of their simple, utilitarian spaces. And in any case, much of Wallis’ garish and charmless decoration inside the main mill house was stripped out by the person who owned the property in the 1980s and 1990s. Each Landmark has a private terrace, and visitors can sip wine on the parterre and wander around the extensive landscaped gardens that the Duke had loved.

I haven’t been there, but Charlotte Higgins says the faces of the former king and his spouse leer from photographs on almost every wall of La Célibataire. This was/is the sweet little guest cottage in which Cecil Beaton is said to have stayed when he visited the couple. Even better, the artist Fernand Léger lived in the town, staying in a handsome house close by, just when the Windsors bought the Moulin from the artist Etienne Drian. 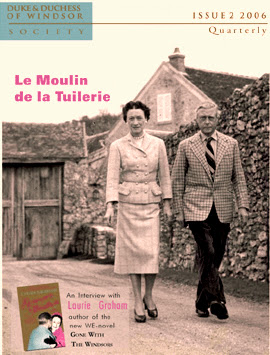 In 2006, the Duke & Duchess of Windsor Society Quarterly Journal chose a photo of the royal couple in Le Moulin de la Tuilerie as their front cover. For excellent photos of Le Moulin, see Pigtown Design blog who recommends the following reading: The Windsor Style, written by Suzy Menkes and published by Salem House in 1988.

Francophiliac blog said that in addition to properties in the UK, The Landmark Trust has four spectacular properties in Italy, including the Florentine home of Robert and Elizabeth Browning, plus places with connections to the poets Shelley and Keats.

The Gardener’s Eden blog visited Scott Farm which belongs to the Landmark Trust USA, an organisation dedicated to the preservation of historic places. It is a 626 acre property with buildings and historic orchards. Some of the buildings on the large property are available for holiday rental, including the Dutton Farmhouse overlooking Scott Farm, Rudyard Kipling’s former home Naulakha, and Scott Farm Sugarhouse.

The French organisation Le Conservatoire du littoral already has active restoration projects underway in coastal Brittany and Charente-Maritime, places that should be ready for letting in the next couple of years. The former will be based in old sardine fishery offices on an island off the Breton coast at Douarnanez, just south of Brest. Douarnenez was blockaded by the British fleet in Napoleonic times and was for centuries a base from which French privateers raided British shipping.

thank for the shout! we've stayed in several of the landmark trust properties, most notably for six weeks in a pair of knitters' cottages in the cotswolds!

I am not a royalist and I was not particularly fond of Edward and Wallis. But it seemed very romantic to give up a throne for a woman who nobody else approved of. Landmark France were smart, choosing this estate as their first to renovate and rent.

Not exactly living in povery then! Churchill soon hurried him off to Bermuda. The Landmark Trust is a great idea though. The National Trust lets out some great properties too.

Until this year, I didn't know of the Landmark Trust's renovated properties that were let out to holiday makers. From all I have heard, it is a remarkable way to a] stay in quite exotic places and
b] put money into the upkeep of the property.

I suppose it was romantic in a tragic sort of way. And perhaps it was very fortunate as well, since Edward VIII would not have been able to pay attention to the national priorities, as George VI did during WW2.

But was it true that Edward used to like Wallis punishing him, when he was a naughty boy?

Hermes
I suppose being moved to the Bahamas as Governor during the war was more about getting the Windsors out of the way than it was giving them important work to do.

But it is very telling that after the war, the Duke was never given another official appointment again. Nor did he have any other work to do. So he partied, travelled, invited guests and lived a very cushy life indeed. But who was paying for their wonderful life style?

Not the royal family's proudest moment, I suppose.

I'm a Republican Helen so that probably answers your point.

He didn't like the Bahamas and referred to the islands as "a third-class British colony". Some very tellling photos on Wiki.

Nothing to do with the excellent Landmark Trust of course, just a personal dislike.

Goodness, I can't quite see the point of a "Duke & Duchess of Windsor Society", especially in 2006, ten years after she had died, as well as their largely pointless life. But there are many who are impressed by the Windsor "style", and Isuppose they were the "slebs" of their day.

The duke of course had inherited personal wealth, largely as a result of his income from the duchies he held as Prince of Wales. Unlike the present incumbent, he didn't do anything worthwhile with these funds, despite some good intentions "something must be done", at the beginning of his short reign.

Of course those who think royal families are largely about corgies, horse racing, polo and fashion are likely to say that most royals did indeed live a largely pointless life anyhow.

But the couple's politics were worse than they lack of purpose in life, I think. The high profile visit to Germany in 1937, meeting Adolf Hitler and their perceived support for Nazi politics were the critical issues.

I saw "The King's Speech" last week and I couldn't remember what happened to Edward and Wallis after the war, except that they lived in France. Thanks for bringing me up to par. The Thrust is certainly a great idea.

Mr Doolan,
me too... all I knew was that they lived out the post-war years "somewhere" in France, doing "something". That is one of the great joys of The Landmark Trust, in all its countries. I wish we had it in Australia.

A letter to Ernest Simpson dated 30th November 1936 outlined Wallis' determination to escape the country, “perhaps for ever” if she could. She knew she would have to lie to the King about where she was going as he had threatened suicide if she left him.

Even then her letters to soon-to-be-ex-husband Ernest continued. She apologised to Ernest for not buying him a Christmas present as she cannot escape from her “prison”.

Following their divorce in May 1937, Wallis continued writing to Ernest – even on her honeymoon from Schloss Wasserleonburg in Austria, telling him: “I think of us so much though I try not to.” There is also a letter to Ernest from her famous trip to Germany, where she shook hands with Hitler. “Wherever you are, you can be sure that never a day goes by without some hours’ thought of you,” she writes, reassuring her former husband that he is in her prayers at night.

This is very bizarre. Wallis sounds as though she was cornered, scandalised in public because she was a "brazen divorced hussy" and fearful in private because King George was an infantile, suicidal, dependent mess.

The only one I feel sorry for was Ernest.

Wallis Simpson kept a secret lover, a Ford car salesman called Guy Trundle, while conducting a passionate affair with the future King Edward VIII. Special branch files that reveal she was under close surveillance, long before the abdication crisis broke in 1936. The revelation is buried in 100 files about the abdication of Edward VIII and the government's subsequent relations with him.

But the reason Britain hated Wallis Simpson can be found in the National Archives which variously described her as an octopus, fake, a legalised prostitute and “a woman climber from a boarding house in Baltimore”. The Labour Party and the Liberals backed the Conservative government. But Oswald Mosley’s blackshirts came out in support of the couple, believing that the king would catapult them to power.

many thanks. Since Wallis was pro-Nazi before and during the war, I would have expected that would have been far more upsetting and divisive than her having sex with a series of men. But then the evidence in the National Archives would not have been known by the politicians or the public back then.

Bellmans Auctioneers in Sussex offered for sale a collection of candid photographs from the wedding of Edward VIII and Wallis Simpson in November 2016. The 17 black and white photographs showed the marriage of Edward, Duke of Windsor to Mrs Wallis Simpson in June 1937, at the Chateau de Cande, near Tours. The images included the library and music room (for the civil and religious ceremonies), the couple with their guests assembled on the Chateau's upper terrace, the wedding breakfast table and the floral arrangements. There were two ceremonies - the French civil one in the library, followed by a Church of England marriage service in the music room.