A cassone was a richly made carved and decorated chest. Because it was expensive to buy, the cassone was much loved by wealthy families in Renaissance Italy. And it was connected to a very special occasion as well, being given by the parents to a young bride during the wedding and then placed next to the marriage bed. A cassone would be a storage space, but it could also be useful as occasional furniture eg a table top. 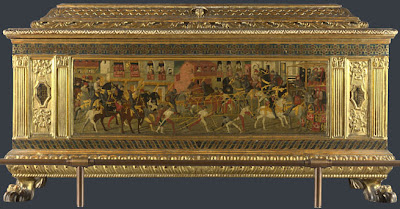 My favourite cassoni had classical architecture, where the flat panels might have corner pilasters, and the sculptural panels might be carved in low relief, under cornices. Most did not have a high panelled back, for these were much too heavy and much more expensive. But with all that gold leaf and all those Old Master paintings, I suppose some families REALLY wanted to show off how elegant they were.

There was one important fact I did not know. James Yorke (Country Life 19/5/2010) said that on the wedding day, the cassone was carried in procession through the streets to the bride’s new home, as shown in a contemporary painting in Tuscany Arts. Thus the element of public display was even more important than I had imagined.

And another thing about the nature of more private display. The Courtauld Gallery said the cassone probably dominated the relatively small but significant space at the centre of the household’s activities. Here the husband and wife would conceive the next generation of their family. Here, too, important guests were entertained or family discussions held. The cassoni provided the backdrop to the life of the family and their painted decorations were carefully chosen, providing both entertainment and instruction. 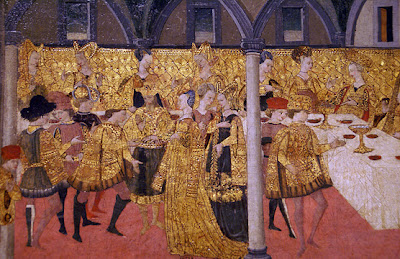 There was no end of subject material for decorating the side panels, depending on the tastes of the individual family. Certain artists specialised in cassone decoration and became very talented in the themes they depicted – religious, courtly, romantic or domestic. Typically, a devout family might ask for a painting of the Annunciation or the Visitation of St Anne to the Virgin Mary, feminine themes. A family with more noble aspirations might select courtly figures at the fountain of love, or ladies on horseback with falcons taking part in the hunt of love. 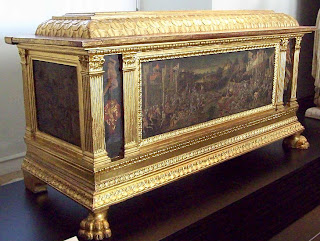 I knew all of this as an undergraduate art history student. But I had not looked at marriage chests for this blog because they seemed to be too early for my self-imposed 1640 starting date. However there have been several excellent museum exhibitions of cassoni since 2008 and it is worth going back to a much-loved object of domestic Italian art.

Cassoni starred in a 2008-9 Metropolitan Museum NY exhibition called Art and Love in Renaissance Italy. It explored 150 objects created to celebrate love and marriage till the mid-C16th, including maiolica, marriage portraits and paintings that extolled sensual love and fecundity, glassware, jewellery and of course cassone panels.

In 2009, The Courtauld Gallery in London opened a display called Love and Marriage in Renaissance Florence. Marriage involved huge expenditure both by the groom and by the bride's family. A patrician husband would buy clothes, jewels and textiles for his new wife and would often refurnish his suite of rooms in the family palace. Among the most significant items commissioned at the time of marriage, and displayed by the Courtauld, were pairs of richly decorated chests. Pairs!


In 2010 The Galleria dell’Accademia in Florence hosted The Virtue of Love exhibition, nuptial painting in the Florentine 15th century. The show introduced the visitor to the private universe of the nuptial suite in the 1400s, richly embellished with works of art. Images from history and mythology populated the wedding chests. Painted by great masters and lesser-known talents, these scenes formed a colourful and vivacious repertory that offered models of virtue and stories of love, historic events and tragedies, to instruct and advise the newlyweds. 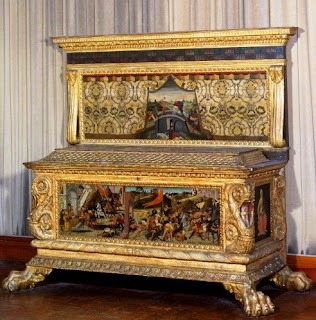 Courtauld cassone with high panelled back, 1472, made for the Morelli-Nerli wedding

Reading recommended by miglior acque came from a 2008-9 exhibition at the Isabella Stewart Gardner Museum in Boston, also centred on painted marriage chests. I'd love to see the catalogue which made an important contribution to the field: Baskins CL, Randolph AWB, Musachio JM and Chong A, The Triumph of Marriage: Painted Cassoni of the Renaissance (Pittsburgh: Periscope Publishing, 2008).

With no gold leaf and no coloured or painted panels, the National Gallery of Victoria has introduced a pair of walnut cassoni, dated from the 1570s. They too would have been placed in the bedroom of the newlyweds' home, to be used as storage furniture. But the parents of these newly weds were not going for gold leaf elegance and glamour; rather the story was told in richly carved narrative scenes which ran across the front of both chests. The story of Judith and Holofernes, for example, provided moralising decoration which was intended for the new wife to follow; Judith was a model of chaste virtue whose bravery saved her people from destruction at the hands of one enemy or another.

The Frick Collection in New York has a similar walnut pair, this time with reliefs of Caesar, still resting on large paw feet. Since these walnut cassoni were also made for the scions of two great aristocratic families, we can assume the parents didn't shun gilding and depictions in polychrome tempera from poverty. Rather the (relatively) restrained decor might have shown a preference for classical learning and respectful moralising .

Cairns Resorts: Spoil Yourself on Holidays
Cairns resorts offer best-in-class hospitality services and are the perfect option for those who want to spoil themselves on holidays. One can opt for Cairns apartment accommodation as well.
http://www.southerncrossapartments.com

Though nothing like as ornate I've seen17th century chests in local houses and museums that seem to have served the same purpose. I'm sure I'm sure I read they were passed down through the family and before a girl married she kept her trousseau there.

I agree... many societies would have had useful chests for storing family linen etc, and this would have been a great present for a bride.

So I would love to know if any of the English chests were works of art, even if they didn't have paintings on the panels. Were they very well made? of good quality material? did they have carving and inlaid work?

Gavin,
thank you for your interest in the Italian cassone.

and extends to China:

In Britain, this is what I remembered:

Thank you, Hermes, for those examples. The oak chest from Lancashire (1677) was lovely and although the five carved panels seemed to be repeated, the entire chest seems to have been made with great care.

But how do we know whether any individual chest-shaped object was truly related to marriage and the bride's trousseau? I would love to know, for example, if contemporary wills described the objects as marriage chests.

The Lancashire chest is only 200 years later than most of the Italian cassoni, so perhaps it really did serve the same function, but without the indicators of vast wealth - the Old Master paintings, the masses of gold leaf, the classical carving.

What an interesting line of enquiry!

I' lookat some old wills when I can.
Fascinating subject.

This is annoying Helen (apart from my eyes and spelling getting worse). I think because they were called different names most wills just refer to the material such a oak or pine chest. I did find thos nice example:

This is a very fun post! I didn't realize that there was an element of public spectacle revolving around the cassone and its procession to the bride's home. That's very interesting.

I was pleased to see that so many major museums included cassone in recent exhibitions. It's encouraging to see how the decorative ("minor") arts are being acknowledged more by major museums. It's very encouraging (and indicative of how the artistic values and "canons" in the art/museum world are changing.)

Hermes
The C17th carved pine coffer had "geometric applied mouldings, the frieze with running floral and foliate motifs". Pine was an interesting choice - because it was relatively cheap? readily available? had some anti-insect properties?

The Italian cassone tended to be cedar or walnut.

M
I have that problem as well. Not only are paintings, architecture and sculpture still privileged as the High Arts, but the Decorative Arts are still exhibited in the back parts of the really important galleries.

Having said that, we have to recognise that at least half of the appeal of the Italian Renaissance cassone are the paintings on the side panels which often had the same high quality as Old Master paintings hanging on walls. Even if the cassoni had fallen apart over the centuries, some galleries sre very happy to display just the surviving painted panels.

Great post! marriage chests from this period is a little too early for my taste but over the years I could not help but study there intricate details, gold leaf and interesting paintings in major museums in America and Europe.

andrew
they are a bit early for my blog as well. But as hermes showed, there was a spread of interest in marriage chests to other countries, in the following centuries. Not as grand and not as expensive, but the shape and use must have been very similar.

I wonder why the sudden interest since 2008. I mentioned Metropolitan in NY, Courtauld in London, Galleria dell’Accademia in Florence and Isabella Stewart Gardner Museum in Boston.

What I didn't mention was the Philadelphia Museum of Art exhibition in 2010 on the art of the cassone called To Love, Honour and Obey? Stories of Italian Renaissance Marriage Chests.

I love these ornate chests. The LACMA museum here in Los Angeles has some fine examples as well.

Enzie,
the original, intact cassoni almost never come up for sale in public auctions and even when they do, ordinary mortals like us cannot afford to buy one. So going to a local museum will definitely remain the way to go.

I wonder if I had taken the children out of school and put them to work at 14, would I have had enough money to buy precious antiques? :)

SO that is how it is called. It's more of a treasure chest to me. Well, literally "treasure" because of the price. In think it's more of a definition of status during those days. Great information. Thanks for doing the research for us!

Jacq
Of all the museums that did a cassone exhibition in the last 2 years, the most aptly chosen was the Isabella Stewart Gardner Museum in Boston. The museum's building was modelled on a 15th-century palace in Venice, around a courtyard garden!

Your blog site is really awesome! You've done lots of excellent work! I hope your success.

good to see that you enjoy art history :)

Just like today, many would-be lovers from the middle-ages had to put up with rejection from the “the object of his great desire”, as this peopm about unrequited love shows…

“I was living pleasantly, serenely and peacefully
the day that Love entered my heart,
for I neither loved nor was loved,
nor did I feel any ill or injury from love.
Now I do not know what love is or what it is all about,
for I am in love with a lady who does not love me at all,
and yet, all that I possess I have from her
and I would have the whole world from her if it were mine.

Auron
many thanks. Love and marriage were serious businesses, weren't they? Not to be taken lightly, or rejected lightly as you have shown so well.

I only know about the visual arts, but I would bet the literary and musical arts were also filled with these topics.

A have added a reference to a pair of walnut chests, acquired by the National Gallery of Victoria from the William Randolf Hearst collection.